A pleasant journey to Quedlinburg

The advantage of intensively working to finish my project '100 Places to See in Germany' is that I am rarely bored. The disadvantage is that I realized that maybe I may need to add more places on the list. I am getting closer to the half of the project and my bucket list for Germany is going far beyond 150. Especially after having my first trip to Harz for visiting Quedlinburg, I instantly enlarged the list, including some hiking opportunities that I would love to try myself before the beginning of the winter season. 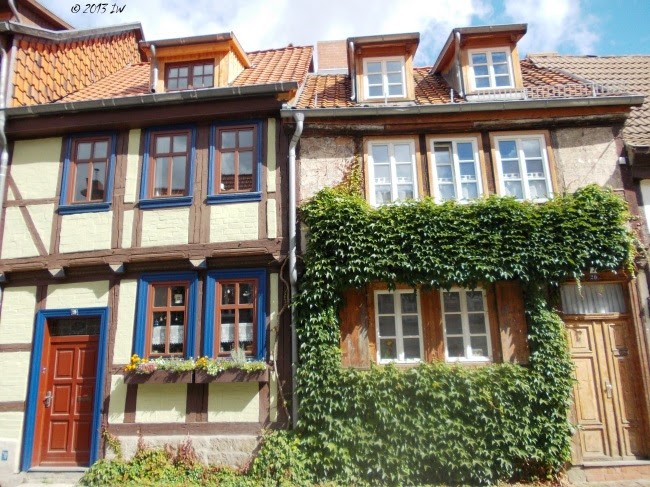 I spent my first 2 hours in the city walking as much as possible, and taking a lot of pictures of the old architecture. The main street from the Central Station - Bahnhofstrasse - goes directly to the open market in the center - that till 3-4pm has a lot of cheap products of all kinds, from shoes to vegetables. The shops are small, some of them, especially those selling old books, being in the business from the 19th century.
Quedlinburg is associated on the cultural map with a rich heritage of around 1,300 half-timbered houses that qualified the city to be included onto the list of UNESCO World Heritage. Most of them are completely reconstructed and after a couple of hours of walking on the streets I had the feeling that I am back in time. The people, shops and restaurants were looking from my advanced century, but inhabiting an old ambiance. And I was sure that I am not in the middle of the making off of a historical movie either. Due to the intensive reconstruction work, walking in the center of the town, where is situated the Tourism Office, was not extremely easy and even less recommended was to have a coffee or a cup of tea in the area. Too much dust and noise, but this can be a reason to return to see how the new centre looks after the intensive renovations. 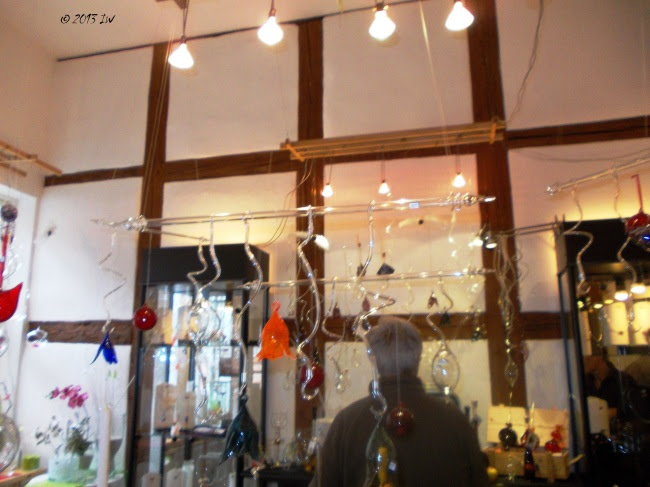 My first serious stop was at Hof 17, a big yard hosting various small shops selling hand made hats, jewellery and glass made under the eyes of the curious tourists. From there, one can take the mini-train touring the city. I was not in the mood for touristic guidance and I continued my solitary walk through the city. 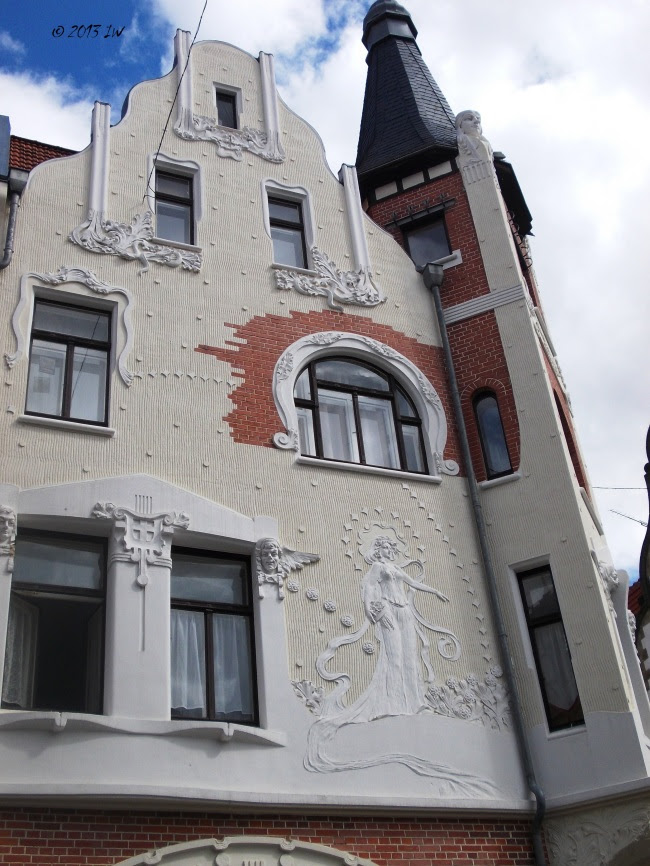 During my documentation about Quedlinburg, I have read about several Jugendstil buildings that are embellishing the old medieval streets, and in one of the bookstores I had a look at a book with images about some samples of such art. But I was not ready to see such a wonderful work of art, decorating with details an entire building. Later in the day, when I was wandering through the residential area, I spotted another hard-worked decorations. For a couple of seconds, I dreamt I am in Vienna.
Switched to an artistic mood, I was extremely pleased to spend some time at the Feininger Gallery. The modernly designed building is hidden in an old yard, but visiting it was one of my main priorities in Quedlinburg so it was almost impossible to miss it. The collection of Lyonel Feininger, a member of the Bauhaus movement, is presented at the first floor. Among the works, one of the few self-portraits, and many paintings that show different artistic stages. Feininger's connection to Quedlinburg was Hermann Klumpp, a local friend that himself studied with Mies van der Rohe and rather a collector of his works. The Gallery hosted at the time another temporary exhibition of several modern artists, such as Daniel Richter, Roy Lichtenstein and Donald Judd. 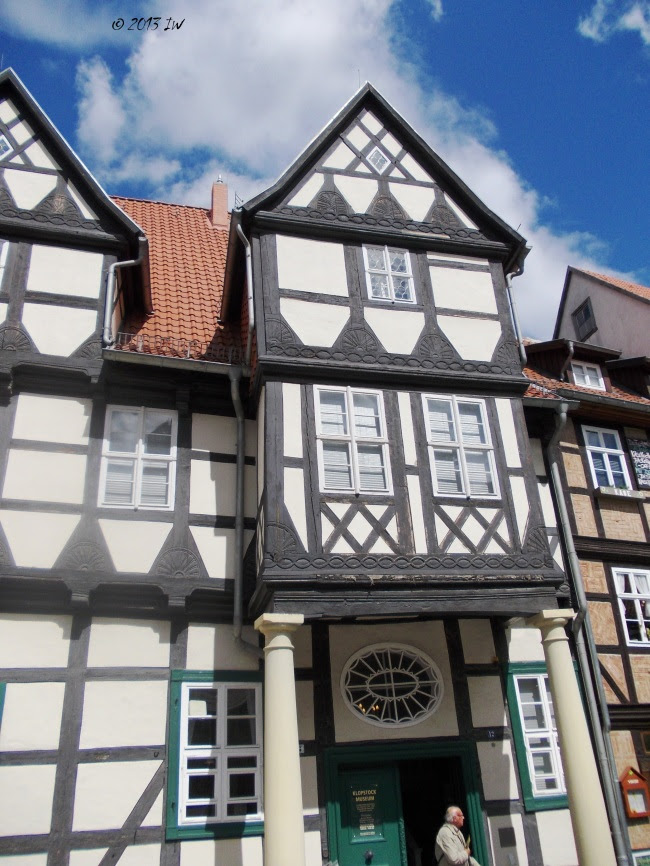 Only 5 minutes away from the world of modern art, in another half-timbered house, I changed the century and visited the Klopstock museum. Here was born the poet that influenced R.M. Rilke or Paul Celan in 1724, but the house, situated close to the castle, was also for various periods of time the residence of the creator of the science of geography, Carl Ritter, of the local Romantic painter Wilhelm Steuerwaldt and Johann Christoph Friedrich GutsMuth who introduced the physical exercise into the school curriculum. The memorial house is presenting in a simple way fragments from the life of the illustrious inhabitants and of their works. A lot of history on my shoulders, but the sweet smell of chocolate of the coffee house nearby brought me smoothly back to reality. 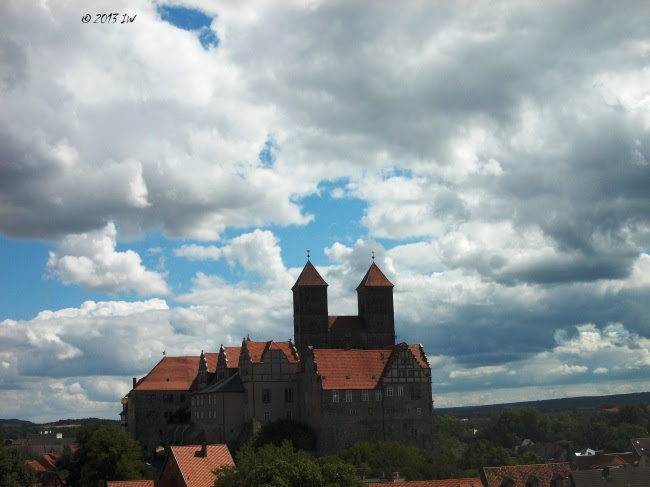 The next serious trip before another couple of long hours of walks on the streets of Quedlinburg was at the castle. Its construction was started in the 9th century, by Henry the Fowler and played both a strategic and symbolical role. The museum presents its history, connecting the dots with the European Middle Age. In the 20th century, it was assumed an important role in the propaganda of the 3rd Reich, whose craziness is explained through various videos displayed at the exhibition.
I enjoyed having a tour of the castle garden, with some funny looking putti guarding a fountain, one of them looking as a little Cossack. After I saw the beautiful landscape and the green mountains, I started to make plans of a hiking adventure in the Harz. But best view of the castle and of the area is possible only if you go down from the castle, and walk to the Münzenberg, the highest location in Quedlinburg. As the best spot of the castle is possible only from the coffee house facing the castle, get ready to have a coffee and relax soon.
After another small walks around Münzenberg and another couple of minutes spent admiring through the lenses of my camera the Jugendstil buildings and the green woods as seen from the quiet residential area, I returned in the city, to see more local life. I did not see too much information local cuisine, except some sour-sweet mustards labelled as Made in Harz. End of August mid-September it is the high season for chanterelle, but those are specific to other areas as well, such as Brandenburg.
Due to its fame as a picturesque UNESCO treasure, the city hosts tourists from all over the world. The accommodation options are diverse for all budgets and styles, from hostels to elegant suites, many of them hosted in old buildings. One hotel, for instance, is a former brewery whose big copper vessels can be admired in the main restaurant. As in many other cities in Germany, the offer of private hosting is generous, with prices starting from 21 € pro person.
My last cultural stop was at Palais Salfeldt. The palace belonged to the son of a mayor in the 17th century, Erckhart Salfeld. The building was renovated several times, and nowadays it hosts wedding ceremonies and big corporate parties, but also an interesting exhibition of ceramics and porcelain, from the private collection of Jutta and Harald Wohlthat.
Overwhelmed by so much history and lessons in only a couple of hours and equally exhausted after so much walking on the old cobblestone streets, I finished my journey with a very interesting discussion at a tea shop, with a lady that knew everything about teas.
For more pictures, here is my Pinterest board: http://pinterest.com/ilanaontheroad/quedlinburg/
Posted by Ilana WD at 1:05 AM

Email ThisBlogThis!Share to TwitterShare to FacebookShare to Pinterest
Labels: 100 places to see in germany, germany travel, quedlinburg travel tips, visit germany, visit quedlinburg, what to do quedlinburg, where to go harz mountains