An uneventful discovery of Gera

Besides my love for the Harz mountains in the summer, during my intensive travels in Germany, I become more and more interested by the state of Thuringia. Erfurt and Weimar are my two favourite cities and the discoveries I made there gave me inspiration for finding another destinations. What about Gera? A city that I did not know too much about can be a reason enough to spend one full Sunday there. The entrance by bus into the city did not impress me too much, with too many ugly communist looking buildings, but the neo-Renaissance style of the main train station challenged that first impression. And the mood kept changing, once arrived in the front of the imposing theatre, with the small local lion mascot in the front.  Built at the beginning of the 20th century, it has a capacity of over 600 places, which means that there are at least that many people interested to attend artist performances.

More refreshed by the cultural news I just got, I moved forward to the Orangerie, surrounded by a French garden, with an impressive art collection, that due to various constructions cannot be visited till the beginning of the next year. Anyway, the weather was good enough for more trips outdoors. Nearby, the Hofwiesenpark, with long alleys bordered by chestnut trees and flowers of all colours. 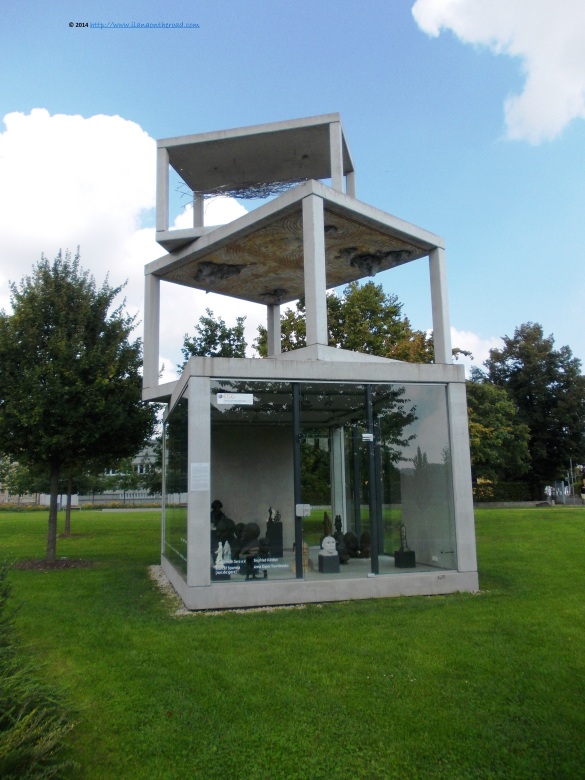 An art installation aiming to expose the representation of myths brought an intellectual note to the otherwise joyous and carefree ambiance.

As I would find out more later on during my solitary explorations, Gera is a city of beautiful villas, a testimony of the rich industrial past of the city. At Villa Jahn, situated in the middle of a large garden, the sober architecture grew up near the long green alleys and luxuriant bushes of flowers.

I could not resist to take the forest road and spend even more time walking in the middle of the forest, crossing paths sometimes with speedy bikes and ladies walking their big dogs.

As usual, adding a pinch of culture to the nature is a welcomed encounter, and for the next hour, I decided to give more attention to the arts. First, a short stop at the Hof- und Kammergut, a 18th century building turned into an art space, gathering different art styles. 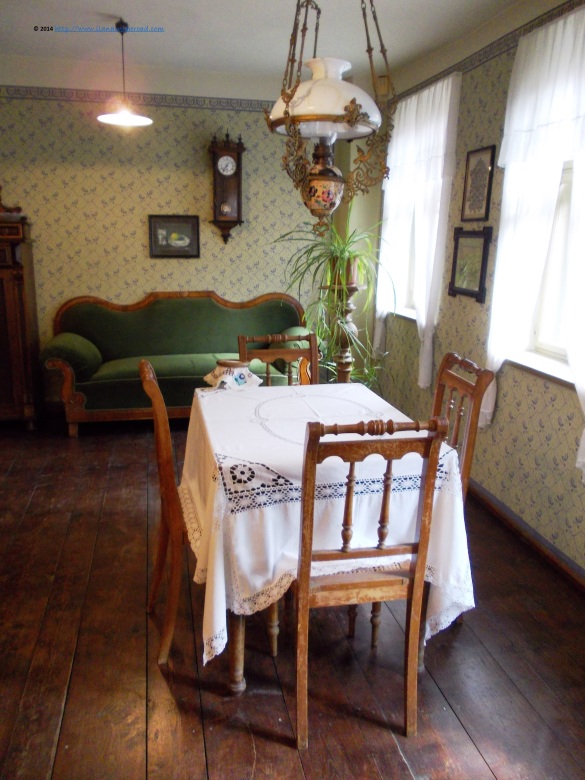 I continued with the Otto Dix Museum, a city brand, where besides the reconstruction of old rooms from the time of the artist's first years of life, there were also some rooms dedicated to the works of the artists that learned, among others, with Oskar Kokoschka. 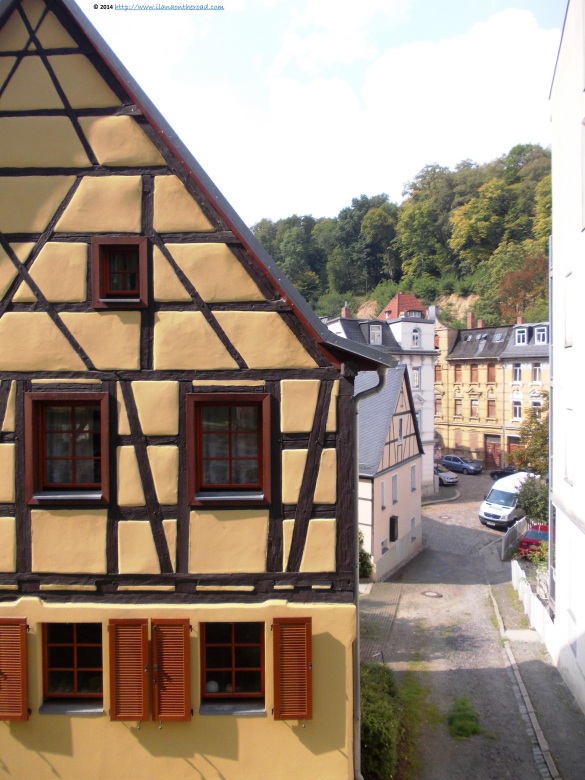 In the neighbourhood, a mixture of different architectural styles reminded the long history of the city and the relative wealth of its brave citizens.

But another unbeaten forest path tempted me and I was in the right mood for more walking.

My destination was Osterstein Castle, but as I was explained by a very well informed lady working at the art gallery in the yard, only one part of the wall belongs to what once used to be the castle. The rest was destroyed during the WWII bombings, and as usual in such cases, there are various variants of the reasons why the castle was targeted: either some high-ranking officials were hiding here, either by accident or simply because the Allies just detonated the bombs here as they were not allowed to bring the ammunition back home. As for now, I just listened to the various variants and kept my opinions for myself.

Back to the central area of the city, I got out of the war stories mood, by simply looking around at the surprising art on the streets. 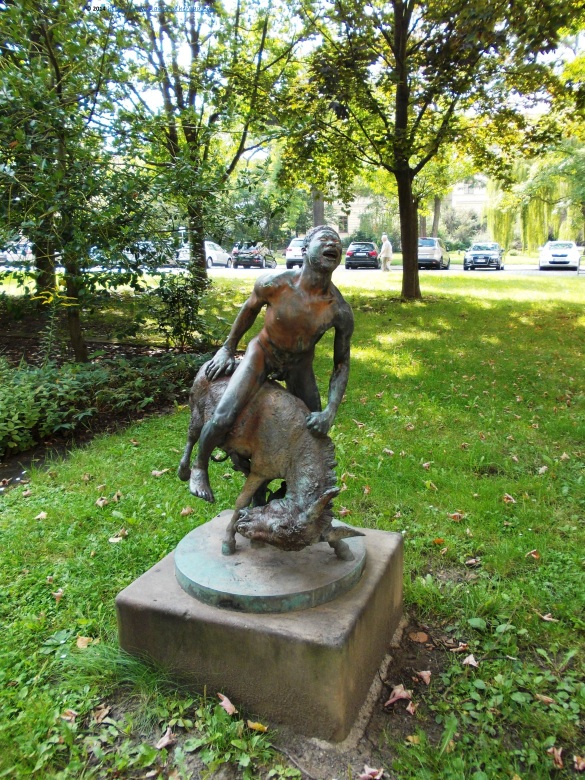 More arts and nature continued in the area near the Puppentheater. 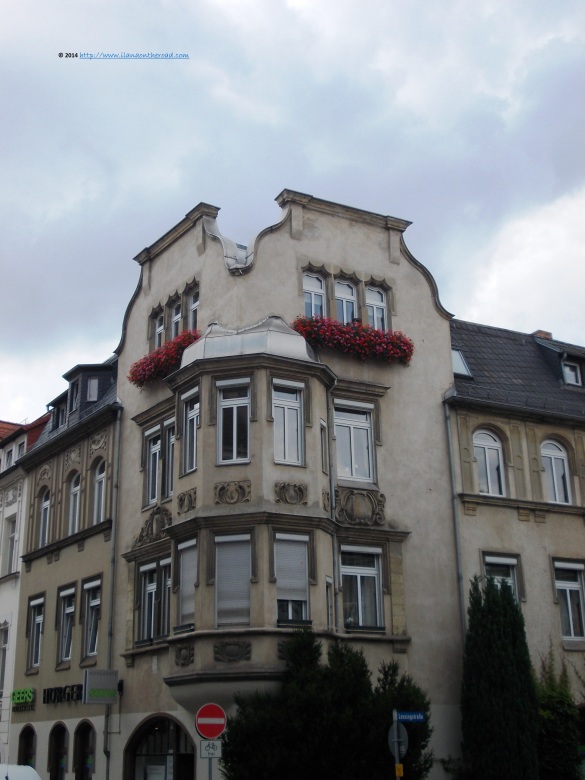 My passion for architecture was rewarded while walking the streets near the central area: Leipzigerstrasse, Laasenerstrasse, Lessingstrasse. As it was a Sunday, almost everything was closed, but I may guess correctly that on a normal working day there will be many shopping opportunities for all kind of budgets too.

The central square, with the classical Pharmacy in the corner - the Stadtapotheke - added a new and different perspective over the city. It was almost empty at this time of the week, the perfect moment for some Segway training introduction, before starting the tour in the city. 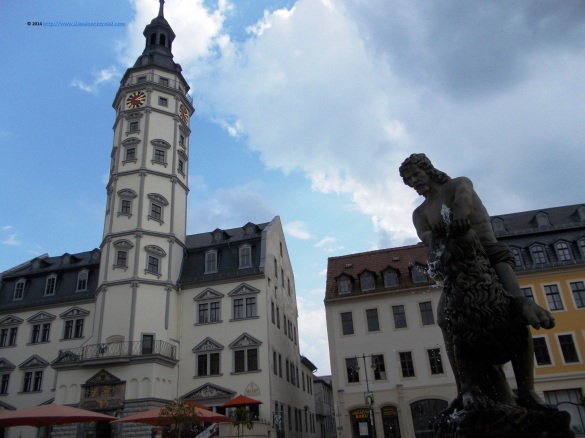 Most coffees and restaurants around, including the tempting Pegasus Literary Coffeehouse, were closed or about to be open, so finding a good place to eat was not an easy task. However, a little tour around the square, guarded by the old city hall tower was an opportunity to get connected to the architectural geography of the place. 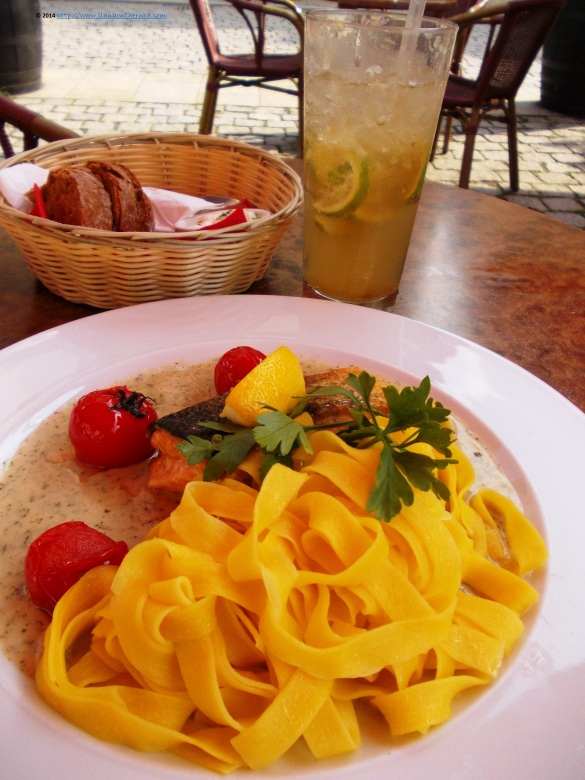 When I finally set up for the lunch menu, it was the Markt restaurant, inside the city hall. The service was relatively slow, but the limette non-alcoholic cocktail kept me a fresh company till the rest of the order arrived. The fresh dough of the egg handmade tagliatelle matched the grilled salmon and the fresh vegetables. The creme brulée was a kind of deep disappointment though, too much sugar and artificial flavours for my expectations. 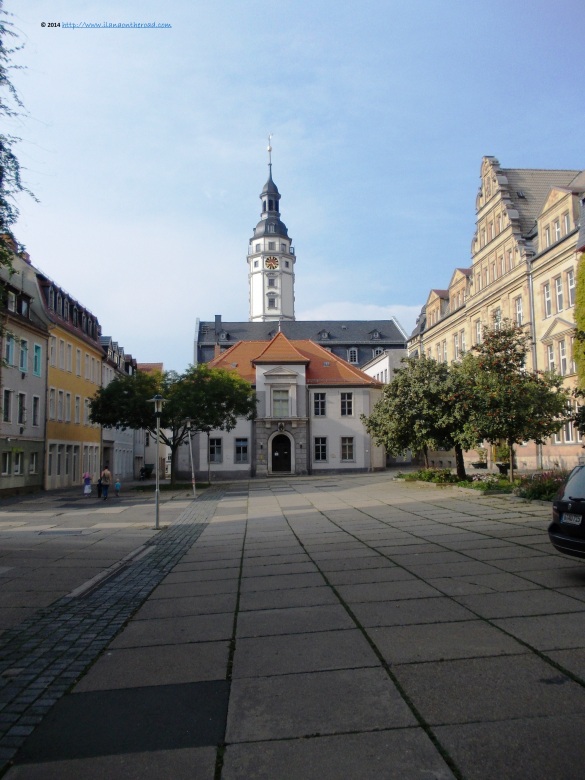 Well feed, I continued to look for more Gera's secrets. Behind the city hall, I arrived at the former corn market, once the Jewish street.

The city used to have around 5 towers, out of them only one was relatively well maintained till nowadays. On the other side of the old wall, some industrial constructions convinced me that I better go back near the main square.

There, I was very curious to have a look at the city from the top of the city hall tower, and after quite a difficult stairs climbing - blame the good food, maybe - I succeeded to reach the top of it. As usual, it is interesting to have a wide perspective of the different architectural and historical layers of the city, and Gera is no exception to the general rule of urban development in the former communist Germany: some chore historical area was maintained, while anonymous block-houses expanded in the outskirts.

I was curious to learn out more about the city, and the Stadtmuseum was one of the places where such knowledge can be obtained, but unfortunately, I arrived there shortly before closing time, so the historical introduction was not possible. Instead, I did find more hidden statues near the green bushes.

Visiting a city without noticing its street art is almost impossible, but this time, the encounter was not planned at all, as I simply stumbled upon some creative corners created by local street artists at the ground level of the UCI Kino.

The typical motives and mosaiques from the communist era from the walls of the apartments on Heinrichstrasse reminded again of the weight of the recent history into the present and future of the city, at least at the level of the visible architecture. The time I spent in Gera, just helped me to understand much better the city, while discovering a new interesting German destination.
For more insights from Gera, have a look at the dedicated Pinterest board: http://www.pinterest.com/ilanaontheroad/gera/
Posted by Ilana WD at 10:39 PM

Email ThisBlogThis!Share to TwitterShare to FacebookShare to Pinterest
Labels: 100 places to see in germany, gera, gera travel tips, germany tourism, visit gera, visit germany, what to do gera, where to go gera