Bikes, castles and the longing for the sea at Senftenberg

The first time when I wanted to visit Senftenberg was following some short notice read in a newspaper regarding the castle there. As I feel that I neglected this noble side of travel, felt compelled to have this trip in mind for the next one day trip. But time passed and more than 10 days after this first acknowledgement only I was on the road with my Berlin Brandenburg Ticket in my pocket. After too many stops, I arrived at the train station, enoying the sunny Sunday.

Right from the train station, arrows are heading the tourists to the historical area. As usual, I like to go off the beaten path and thus after I made a short turn from Bahnhofstrasse I ended up in the front of the Theater Neue Bühne, a local cultural institution sharing the building with a local high school, a Bauhaus style construction originally erected in the 1930s. Besides hosting the most important cultural events in the city, it also has a cadrillon (Glockenspiel) donated by the local Greek-German businessman Sokrate Giapapas.

As a reminder that Senftenberg used to be part of the former communist Germany, recently painted and renovated Plattenbau are surrounding the area.

I return on the main road, heading back to the historical area. Metal billboards presenting in medaillons old images from the city are creating a bridge between the modern present and the industrial past. 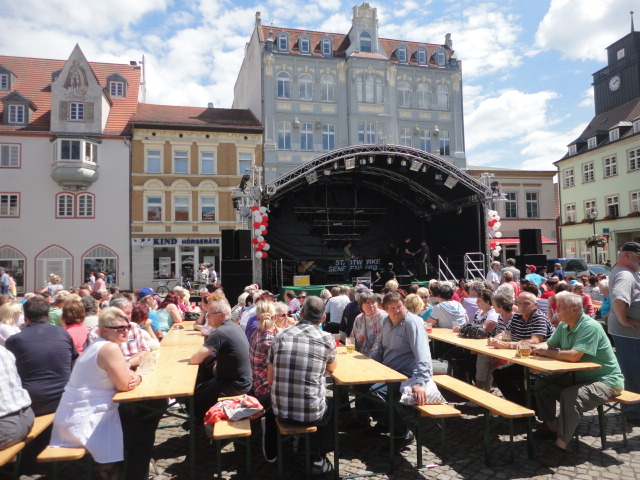 The locals are right now busy in the main square in the front of the historical city hall with an open air celebrations that involves, naturally, beer, a lot of music on the stages organized around and many shopping, including of local products.

But I do have my own travel agenda and this time I am decided to follow up the plan which has as top priority the visit at the castle. The first encounter is with the art gallery - Gallerie am Schloß - which is closed this time. 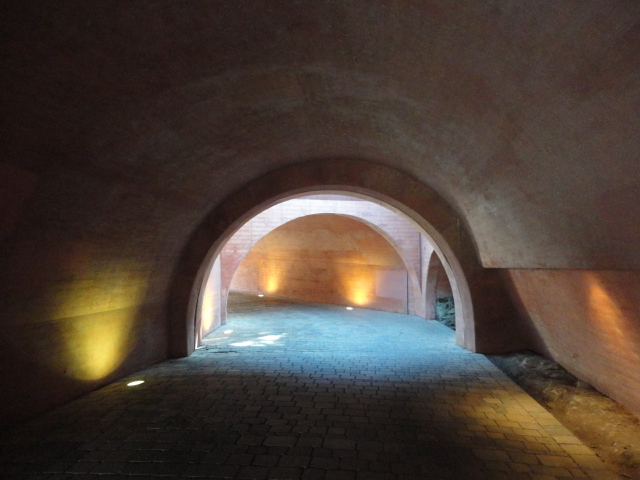 In order to arrive to the castle, I go through some long dark paths bordered by stone arches. Outside, one explore the fortification systems and the Bastion built in the second half of the 18th century. Wonder where a princess can hide here...

Back to the light, right in the front of the entrance, there is not a white horse waiting, but an original bike model between two citizens. No prince today,  it seems. 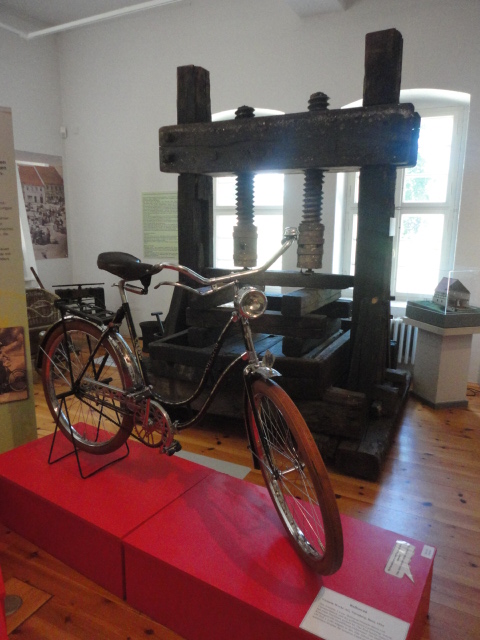 Let's enjoy life then. The castle is hosting a temporary exhibition presenting various models of bikes from the beginning of their history till the communist Germany and beyond. Even not passionate about technique, you still can enjoy the cultural histories told by the bicycles.

The prototypes, some of them very interesting, especially if we think about the different models produced separately for men and women, are scattered among pieces of local history, many presenting local colourful costumes and interios of the interesting Sorb minority still living in the area. After the war, having a bike was the equivalent of having a horse in the time of the princes and princesses, hence the saying: If you have a bicycle, you are king. (Hast du ein Fahrrad, bist du ein König).

In a way, this two voices dialogue of various historical times makes sense. Senftenberg was part of the industrial area near Cottbus, providing energy for various industry. A mini-mine, another local activity, can be visited at the museum too. Nowadays, there is not too much of this past left, following the fall of communism and the resettling of the economic priorities.

The castle, displaying a simple and strict elegance that I encountered in many such residences in the North and Central part of Germany, also hosts an art collection of artists originally from the area.

Outside, the gardens are more inviting and the preferred transit areas for the many biking routes across the city and the region.

I am heading closer to the sea this time, with a short stop at the Tierpark, which was recommended as a local travel attraction. It can also be visited by bike, otherwise, it has a couple of funny residents, many of them welcoming their guests out of their little residences. If you are patient enough, you can even cross paths with some hurried peacock going fast who knows where.

With more than half of my to-do-list for the day covered, I am finally free to enjoy the quiet view of the lakes and the shaking boats.

The best standpoint is the busy Pier Eins terrace, where I find a nice place near the water and get ready for at least two hours of doing nothing, except having a meal and probably an icecream too. My zen mood is troubled though by a waitress who just refused to take my two orders: a pasta, plus a special home made icecream. 'Pasta is enough', she kept saying and I feel like a disgusting hungry animal. After unsuccessful negotiation and the promise that I will pay here everything, she only bring me the pasta at the end, which are not as a huge portion as I might excepted: not too much oil, well boiled, with some interesting spices and the refreshing leaves of ruccola. I order also some fruity icecream after all, from another waitress, which does not have a spectacular taste, but keps me around the shore for the next half an hour.

For the siesta, I keep my eyes on the boats and walk around the shores. Besides bikes, also Segways can be rented and I promise to myself that one day I will be back in a good shape trying various healthy transportations during my trips too - not only cars, trains and airplanes.

There is so much nature around in Senftenberg, that I forget sometimes that some ugly former communist buildings are just around the corner. 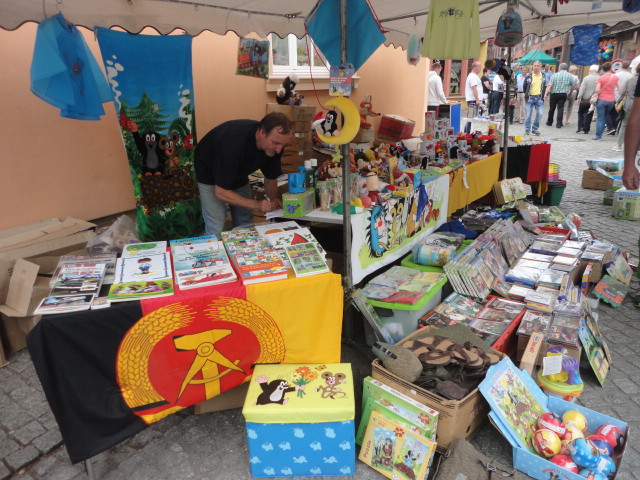 But not everyone is ready to take an aggressive distance to the communist (recent) past. Back in the historical area, the celebrations continue but people are more busy to check the good deals. Among the offers, former books and other popular objects from the time of the DDR, presented on a table decorated with the flag of the former communist Germany.

My obligations of travel writer are bringing me to a different part of the city, where I can go only by walking around 20 minutes. No sea or nice sky at sight, only gas stations and some dusty buildings till I am in the garden city from the Brieske area. 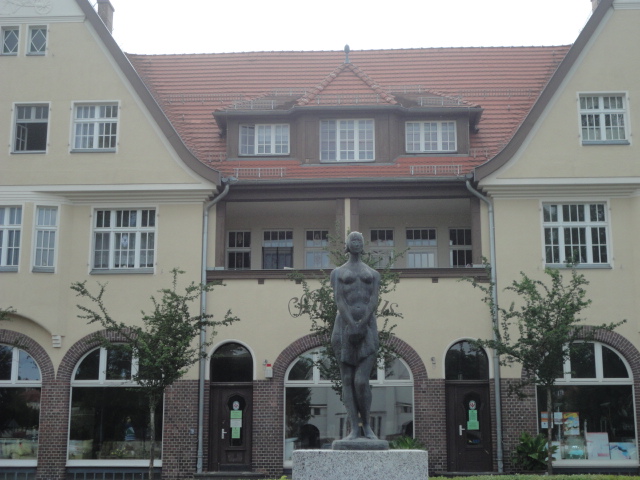 It is a settlement built at the beginning of the 20th century for the workers involved in various industrial sectors in the area. Protected buildings from the end of the 1980s, the complex is considered an example of industrial architecture. 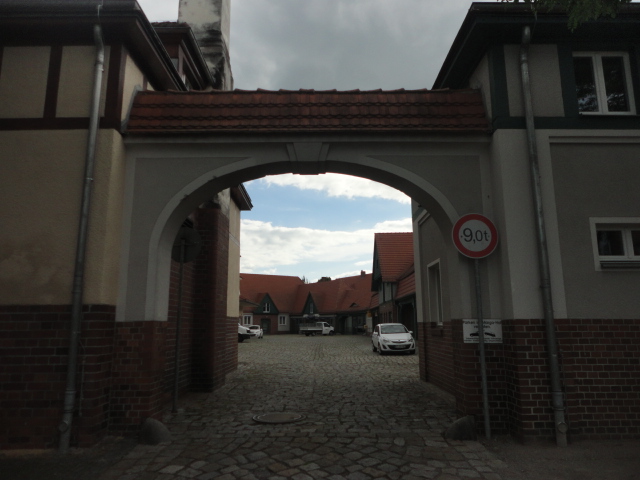 The quarter was provided, besides the buildings for the new industrial class, with a church, a shop, a school and kindergarden for children and big street whose cobblestones are kept in the original shape.

Nowadays a quiet residential area that was looking almost empty that Sunday afternoon, it has a strange architecture though, with very small windows attached to big walls and conic roofs that may look with the military metallic hats from the time of the Prussians.

There are regular guided tours introducing the area to the visitors, as well as a small museum that was closed at the late afternoon time of my visit. The anxious feeling of living in a big house with small windows can be balanced by the view of big yards connecting various buildings, a guarantee that some social life was in sight for the busy residents of the area. 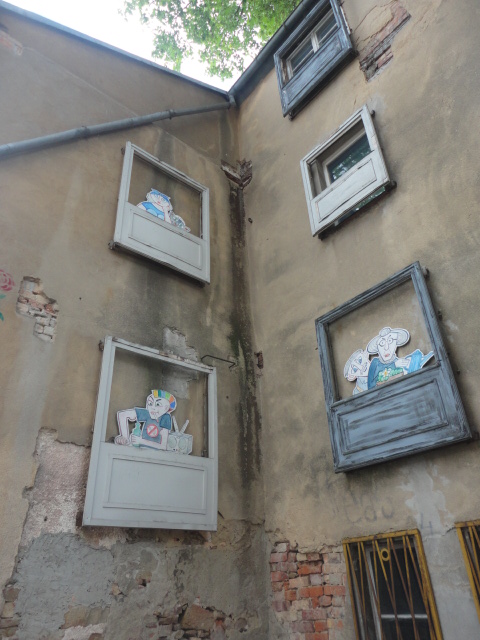 I keep developing my sociological consideration on the solitary way back to the center and after, on the way back to the central station waiting for my train back to Berlin. Maybe I did not find here a spectacular castle, worthy of a Disney movie, but at least I did enjoy the quietness of the waters and the sunny day and realized how much I am missing the sea. Plus, some party gang of international students dancing in the train. Life can offer funny things sometimes...
For more insights, photography and recommendations, check the dedicated Pinterest board: https://www.pinterest.com/ilanaontheroad/senftenberg/
Posted by Ilana WD at 12:45 AM