Working as hard as I can at my Project '100 Places to See in Germany' I got charmed by the passion of booking as many country trips as possible and as spontaneous as possible (nothing new about me). When I discovered a good offer for a night in Düsseldorf at a 4-star villa I did not think twice and did the booking. Before arrival, I did not know anything about Villa im Park, except the good communication with the hotel representatives via e-mail, in a good and fast English.
Reaching the hotel was not as simple as my GPS phone app showed. On the map, there may be 15-20 minutes of walk from the airport, but in fact there it is a highway you cannot overpass otherwise than by car, in our case, taxi. The easiest way, recommended by the hotel representatives was to go to the city, to the Central Station and to take a local train till Lohausen station followed by a little walk. We tried this variant later in the day and lasted around 30 minutes. But for the beginning, we wanted to arrive as fast as possible to the hotel for starting the adventure of discovering the town and thus, we preferred to take a cab. 15 minutes later and 20 Euro less in our budget we were at our Villa situated in a very middle class peaceful neighbourhood with art galleries and schools and also some restaurants very close from the villa.
During the Sunday, it was no one at the reception desk, but we saw a letter glued on the door with our name on it with instructions about how to find our key, to enter the house and our room. Very easy and efficient method.
It was a quiet ambiance, without any other sound than the big airplanes coming and going till late in the evening. When I fell asleep around 23.00, the noise was still there and it is was the noise that I noticed the first thing in the morning, around 7am. Note to self: never book a hotel near an airport, whatever fancy it may look.
During our first 10 minutes spent in the room, I admired the nice balcony where later I will do some little work using the advantage of free Internet. In the front of my eyes, I had a little lake with a flamingo statue and some cows in the neighbourhood. The room has TV and a mini bar with some drinks and chips and some sweets, a bath tube and a closet and a little lobby with a green table to put your luggage on.
There were some instructions in English and German left on the desk about the main facilities, the Internet password together with a couple of leaflets about the city, including a map of the subway. Anything was fine at this level and time of the day.
More than 10 hours after, we returned to our temporary home and had more time to test the facilities of the hotel. It was still empty, and we took a little tour of the garden, we stopped in the library, with many German books for all tastes. We arrived too late for the sauna, open only between 10am and 8pm. I was in the mood for some spa feeling but more dear to me was the passion for trips so luxury travel will be a next time and preferably in Berlin where I do not need to rush too much to see as much as I can in so little time.
There was a smell of old furniture and humidity in the lobby that I did not like it. Back in the room, I discovered some traces of lack of cleanliness in the bathroom, especially in the bath tube that did not please me. The villa is quoted with 4-star and such negligences are much below my expectations. From outside, the villa does not look well kept and was a bit surprised when I saw it first. There it is parking space in the front of the building.
The next morning, in the breakfast room, I discovered some of the faces of the hotel, a nice personnel and ready to help, in English and German. We were not alone in the hotel, as a group of Japanese tourists and a German couple joined us in the breakfast room. The breakfast is included in the price of the room. For the sauna and swimming pool one need to pay an additional 10 Euro fee.
Overall we enjoy our stay, but only because we paid a Groupon price and did not plan a long stay. I did not like the permanent noise of the air planes and the bathroom modest standards of cleanliness. Thus, the next time I will visit the lovely city Düsseldorf - watch this space for more updates - I will prefer to try a different accommodation option. 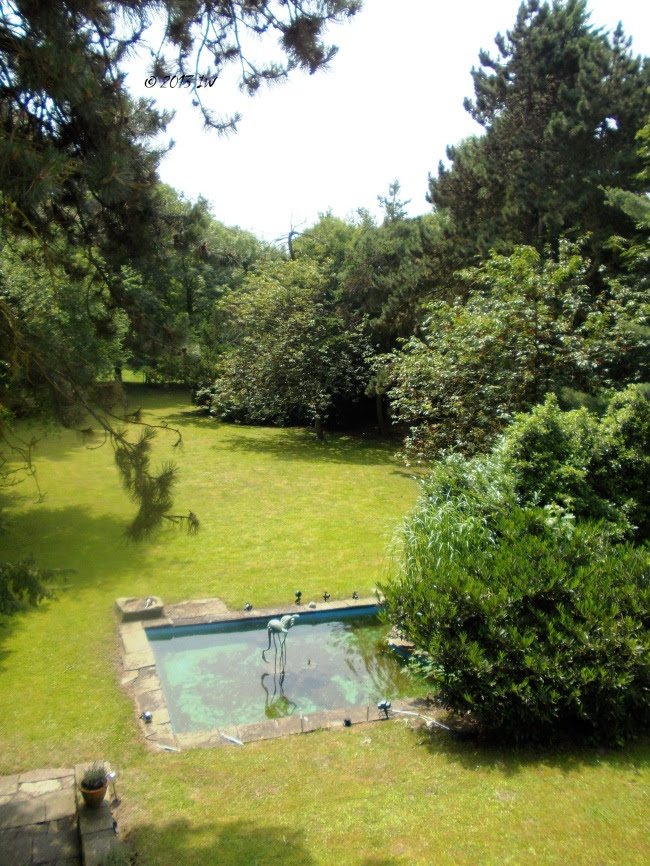 The garden is big and simple. More flowers will bring more life to the residence, probably. You can also have breakfast outside, but the tables did not look too clean. Inside was warm and pleasant, with some background music. 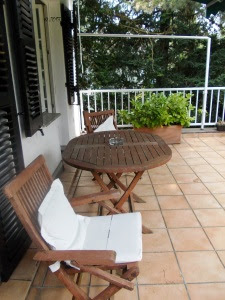 The balcony is big and will technical facilities to charge your computer. I loved working outside, except the frequent moments when an airplane was disturbing my concentration. 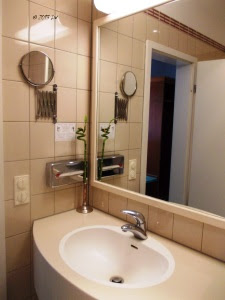 The bamboo in the corner is a nice choice. The metal vase was looking quite rotten though. 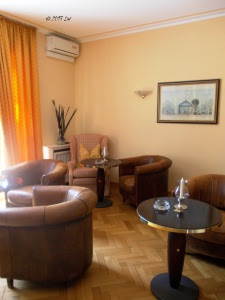 The hotel has a library with a bar and German books. During the autumn and winter it can be a pleasant space for socializing. 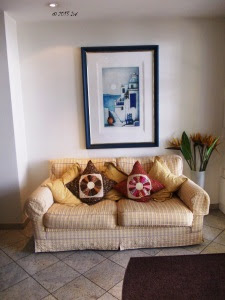 The couch from the lobby. In the rooms and in the lobby there are many reproductions of modern painters. 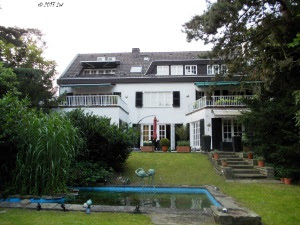 The villa does not have many rooms, but has a certain air of intimacy that can attract the visitor to stay a day more. 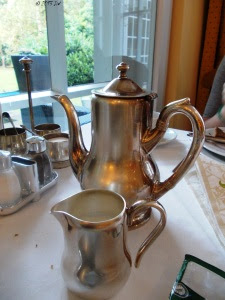 The morning coffee served in elegant recipients. The menu has a lot of healthy meals: yoghurt, fruits, cheeses and teas.