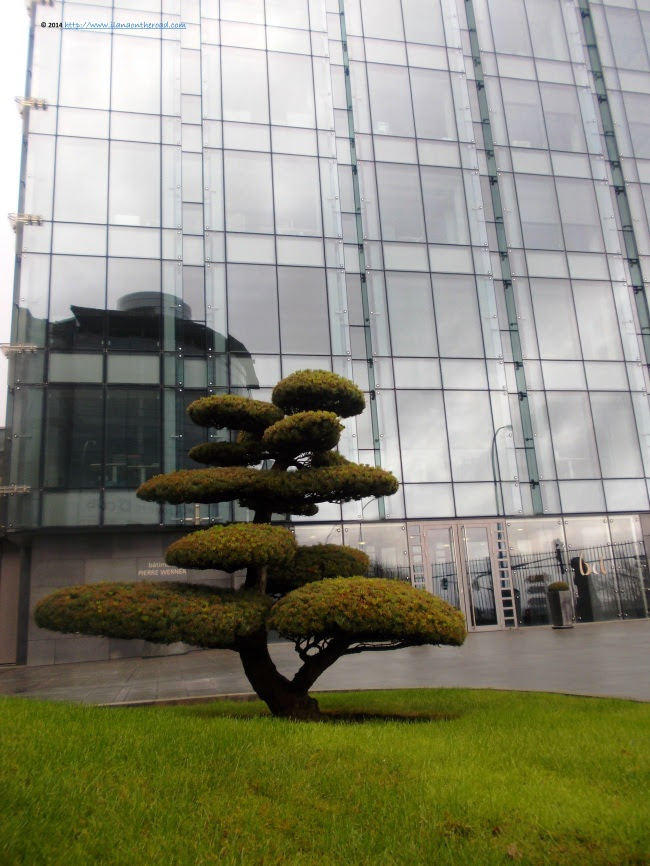 The last two months of 2013 weren't the most pleasant of my life and didn't have too much time for keeping the track of all my travel plans. For the same reasons, long-term planning was almost impossible, but when I knew for sure that I can easily return to my 'normality', I announced the next destination: Luxembourg. A little corner of Europe that I always wanted to visit, only 50 minutes by car from Trier, the oldest town in Germany. The journey from Berlin was relatively easy, enjoying the unusual sunny weather and not too much commotion on the road, although it was the last day of the year. As our hotel was situated close to the center, shortly upon arrival we didn't waste too much time and started the exploration of the city.
The risk to visit a new place in the last and/or the first day of a year is that many good restaurants either are fully booked or closed, the museums are on vacation and the shops are closed. The streets were full of fancy youngsters ready for the party, walking around the Place d'Armes.
After eating something very fast at the Banana's, where we had some not so impressive fish and chips, but welcomed with smiles, we made a little tour of the central area by night. We stop around the big lions in the front of the discrete building of the town hall, walk the main streets near the shopping area - where we will return many times during our walks the next day - smile near the creative playground of Theatre des Capucins and end up for a dessert at Belucci. The delicious creamy Panacotta saved the failure of the previous meal and made me really happy that I finally made it to Luxembourg.
There are only a couple of minutes left from 2013 and we need to find a good location for watching the fireworks. As everywhere in Europe, for at least one hour, the city turned soon into a fighting arena: a lot of fog and spontaneous little 'bombs' threw on the street that you better avoid for the sake of the physical integrity. We found a relatively quiet and safe corner near the sculptural high monument for the victims of wars and watch the show of lights. Around us, people are speaking in French, English, German or the local Luxembourgish and we enjoy after all the international ambiance. 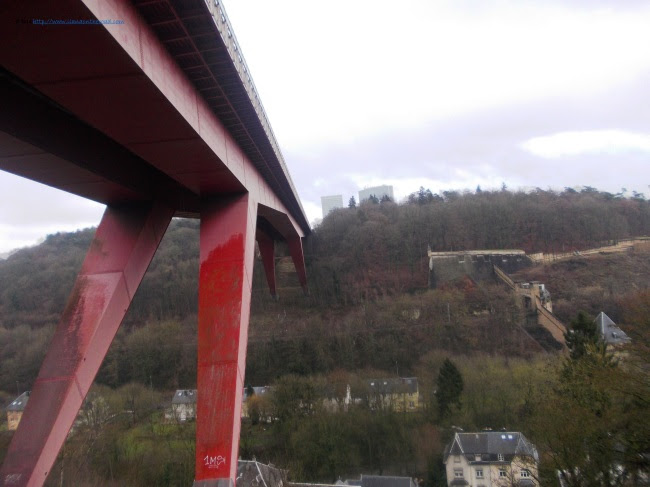 But we have big plans for the next day and we succeed to return to the hotel around 1.30. Six hour later, we are ready for the breakfast, some cups of coffee (me) and an expedition to see as much as possible from the city. We enjoyed our night walks, but the morning light made us feel that we landed in a wonderland. Old city walls and spontaneous glass-and-metal apparitions in the European quarter, enormous bridges over quiet streets separated by water are covered in the wraps of deep silence of the first quiet hours of the morning of the first day of 2014.
We go in the direction of boulevard de la Petrousse, for having a look at the building of Caisse d'Epargne, followed by another walk along Boulevard Royal and Rue Notre Dame for the Casino, a building where also the composer Franz Liszt stopped for a while. Rue Philippe II is full of fashion temptations, especially Sonia Rykiel's shops that I cannot see easily in my part of Europe, but also Marina Rinaldi, Cartier, or Hermès. Everything is closed now, as most part of the restaurants or tempting bakeries and thus, we save a lot of time for arrival fast in the European quarter. 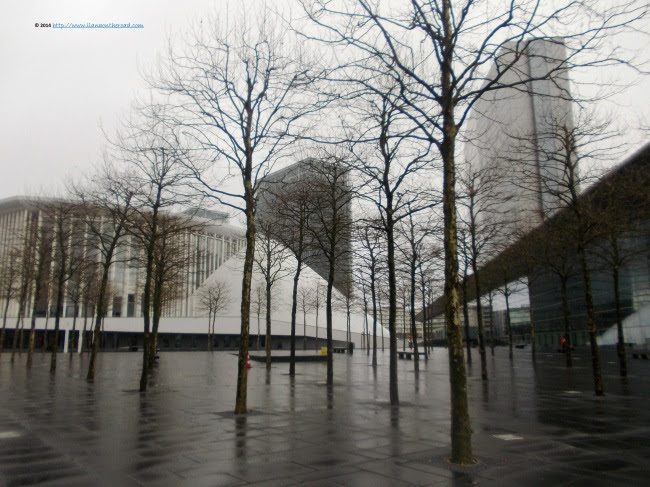 As expected, the work is put on hold here, and except the colourful graffiti at the entrance, everything looks very sober. The trees arising from the concrete bring more life into the official bureaucratic architecture that reminds me a bit of the only part I really know from Brussels.
On Place d'Europe no. 1, on plateau Kirchberg, the building of the Philharmonic is hiding a world of harmonies that counters the uniform language of the European bureaucrats. 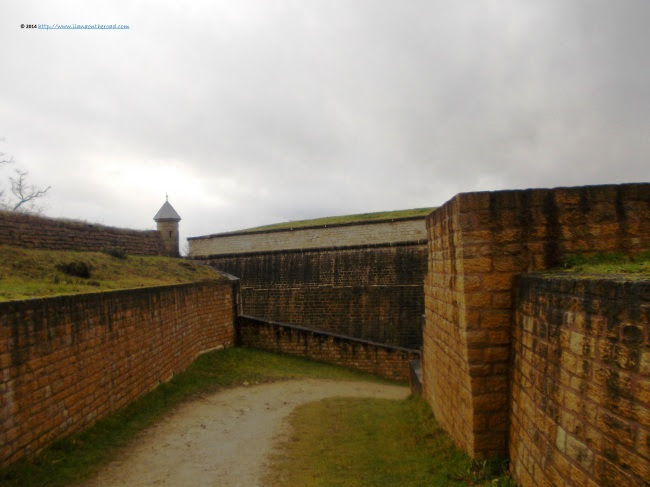 We want to return to the center, but instead of taking one of the colourful buses that regularly connect the different parts of the city, we chose to follow the way of Vauban fortifications that not only leads us through different stages of history, but also connects different parts of Europe. The countrymen from Luxembourg brought their skills to Transylvania and contributed to the construction of the fortifications that can be seen nowadays near the Alba Iulia area, in Romania.
The historical benchmarks are explained in French or German. The walk is pleasant and solitary, with interesting angles over the old part of the city. I am happy for the little hiking breathing deep the fresh air of the little forest we are going through. Sentier de l'Esperance/Path of Hope brings us in the upper town and the remains of Luxembourg Fortresse. 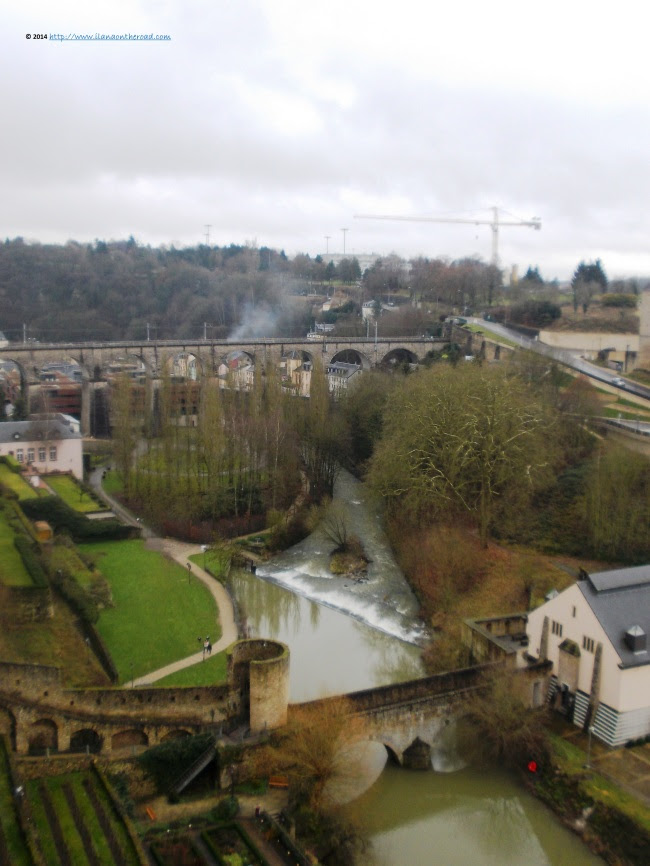 After the Vauban fortifications, we follow a different route, built by Wenzel, both bearing the name of architects that at years distance erected the fortifications systems of the city. This time, we have less walks in the middle of the nature, but we go through the main standpoints of the citadel and admire the beautiful geometry of the upper city.
Together with us, other tourists are enjoying the beautiful views. We are back in the city and the city is back to the busy life. 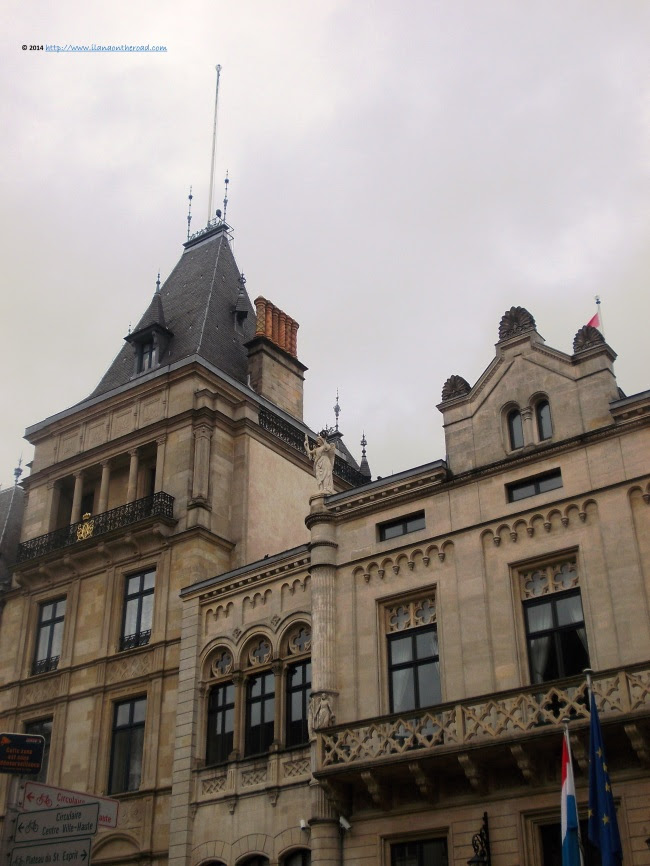 After hours of walking, I need some refreshments but I prefer to wait till we arrive in a great and noble location. Chocolate House, hosted in one of the fewest remaining patrician houses built in 1615, is situated opposite the Grand Palais Ducal. With a musical background from the 1960s, and a coffee and some delicious pistachio chocolate, we watch the simple yet noble look of the Palace. The local custom is to check if the flag is on the top of the building, case in which the ducal family is at home. Usually, the members of the grand ducal family can easily be seen, but there is not such a sign today. 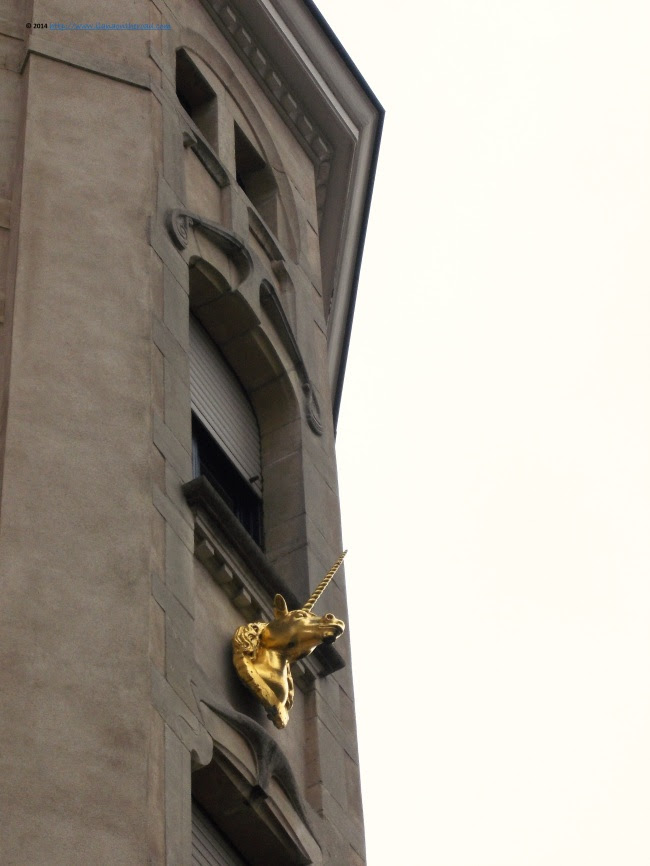 On Rue Marché aux Herbes we discover interesting art déco corners. In the daylight, we saw how we missed a photo exhibition about Africa in the townhall square. Archaeological findings are under work in the main square and we hope that next time we will be there to have the chance to visit the art and history museum for more insights about the rich Roman past of Luxembourg. 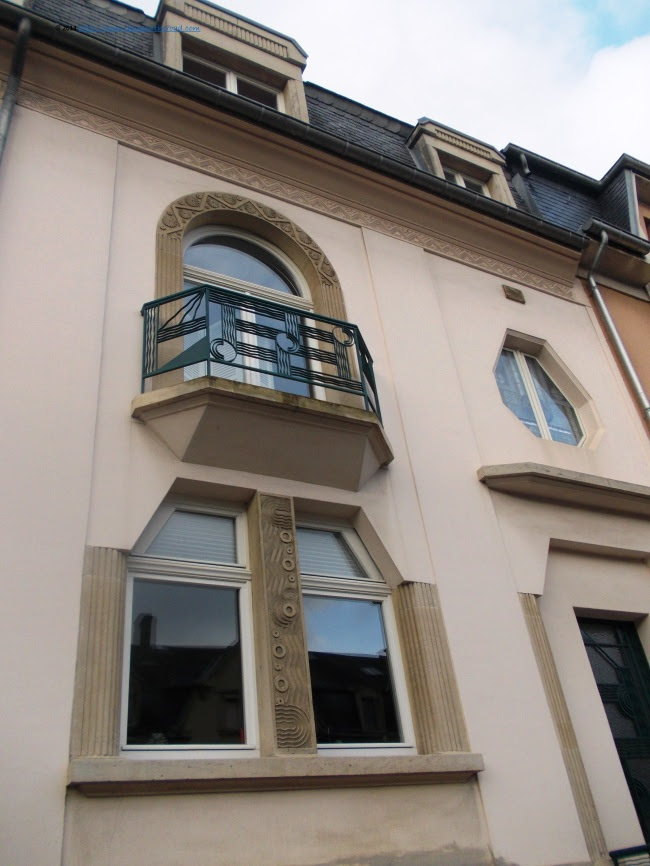 The weather is still pleasant and we decide to want to discovery parts of the city not necessarily included on the main guides. This time, we chose Monterey Avenue, where besides the interesting arts-and-craft/art déco architecture, we also enjoy having some time in the park, with huge playgrounds near fountains arising in the middle of a lake. Later in the day, we will discover another beautiful natural corner, the parc on Jean Pierre Pescattore. The locals are also enjoying the pleasant windy weather and are jogging. Luxembourg seems too a paradise for bikers and hikers, due to the wise balance of natural beauty with man-made paths that invites to a healthy life. 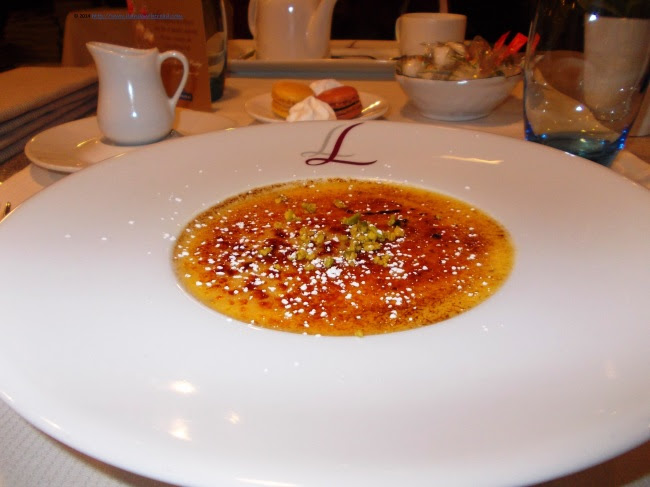 So much walking requires a proper eating. Luxembourg is a great foodie place, with dedicated little gastronomic islands offering many fish-based but also Asian meals. There is also a special production of cheese and Mosel white wines, that complete the landscape of an exquisite table.
The French cuisine is the queen and we dare to go to the French Brasserie for a real sample. Due to the shortages of restaurants around, the place is very busy and the service is extremely slow. Most of the meals we want to have are no more available and after various unsuccessful trials we are having a grilles trout with almonds. A bit too oily, but after all it is a meal.
I didn't want a dessert, but somehow, the inviting name of crème brûlée with Tahiti vanilla from La Lorraine sent me a message that there is a meal I shouldn't miss. When I ask if they still have it, we are answered: 'If not, probably we will need to close the restaurant'. It is basically a fish restaurant, and the smell tells us so, but the crème is one of the best I had in ages: a delicious cream with a crispy cover of sugar with pistachio spread on the top. A sweet dream that makes me forget about the relatively high price.
But everything is pricey in Luxembourg, because it is one of the countries with the highest income in the world, and a tax paradise that attracts many expats from all over the world.
Many of these expats are hanging around in the bars and restaurants still open, waiting for the end of the winter vacations or for the next ski adventure in the Alps or in Switzerland. We were lucky to have the chance to spot some of the local noble families, having a first day of the year gathering in the posh places from Place d'Armes: a wise combination between French style and German seriousness.
We hope to have our end of the day meal in such a place too, and we made a reservation at the Brasserie Pless. A brasserie means usually a relaxed middle-priced place, but this one is part of the luxury design Hotel Place d'Armes and should follow the high standards. Unfortunately, we only enjoy the elegant design and exquisite service, but the majority of the meals we are interested in are, again, not available. A veggie salad is all I can have and due to the excellent day I already had, I can live with that.
When the next day, early in the morning, we leave the beautiful Luxembourg, but long time after, I still feel like being out of a wonderland that will call me back soon.
For more visual insights of Luxembourg, visit my Pinterest board: http://www.pinterest.com/ilanaontheroad/luxembourg/
Posted by Ilana WD at 12:34 AM