My stepfather went only once in Germany and then he only visited Lüneburg. Back home, he was extremely impressed by the little picturesque houses, maintained in a good shape for centuries. As the city was left untouched by the WWII bombings, the city seemed to have its special histories to share. Taking the chance of some special Deutsche Bahn train offer this summer - less than 40 EUR two ways from Berlin for a weekend ride - I embarked on my trip direction North Germany.

Unlucky me, during my entire trip to Lüneburg I had as train company a huge group of soccer fans who were heading further to Hamburg. I am tolerant enough to accept people's love for football, but everything stops shorter when it comes to the never ending bottles of beer consumed during a 3-hour trip many poured on the floor. Upon arrival in the city, I preferred to err for a couple of good minutes, enjoying some silence and fresh air, around the waters of Ilsenau. The view of the historical houses changed my mood. A nice lady engaged a conversation with me, explaining me the downfalls of living in such a house: sometimes it can be too cold and usually the doors and windows cannot be changed.

The watermill is another historical destination, built in 1407, where people can also rent a place to stay for a couple of days.

The water seems to have played an important role in the development of this city. Nowadays, this role have been converted into cultural value. The water tower - the Wasserturm - for instance,  gathers various exhibition spaces and also offers hosting for special events, such as weddings.

From the 56-meter high 6th floor, one can have an overview of the entire city. Maybe there are not too many new buildings erected in this city that from above looks surprisingly green, but there are some work underway to give the city a new architectural face. 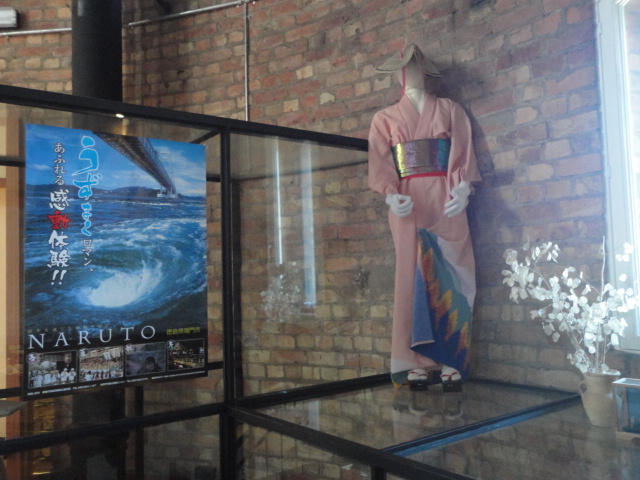 On the way back from the top of the tower, a little stop to admire an exhibition about Japan, following the twinning between Lüneburg and Naruto city. 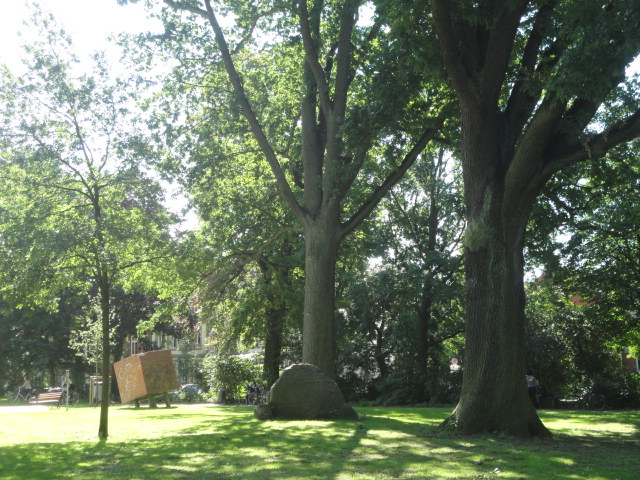 I am walking under the huge trees of Clamart Park, with a monument for the victims of the French German wars. The massive green seems to bring more friendliness in an area dominated by dark brutalist style architecture. 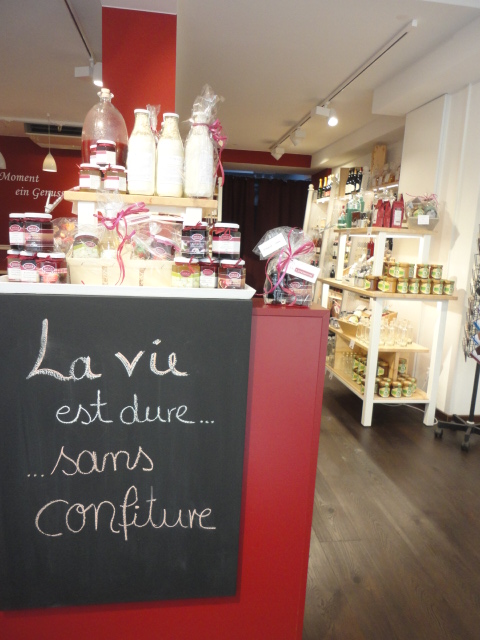 Sooner, I am entering a joyous area, at the intersection between Ritter and Rote Straße, full of tourists and small attractive shops. Many are selling sweets containing local salt or bonbons shaped as the historical buildings.

The reality size buildings are more tempting and interesting, although not on the plate. Different colours of stones were carefully built together creating pyramid-roofed houses that may look but are not always the same.

It may look like a museum, but real people are living here and always used to. Everything is so well maintained and renovated that it seems that the houses were finished only a couple of months ago. 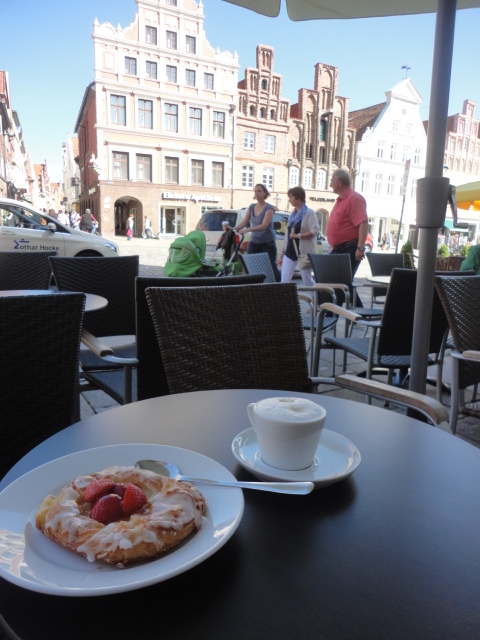 I am a bit curious to know how the space of the houses is organised, but as no one invited me yet for an overview, I take a break and a Kopenhagener at the historical Hesse Bäckerei and try to read fast the spirit of the place.

The more I get closer to the Am Markt, the more tourists I meet. Locals on bike are finding hard their way in the middle of the crowds. 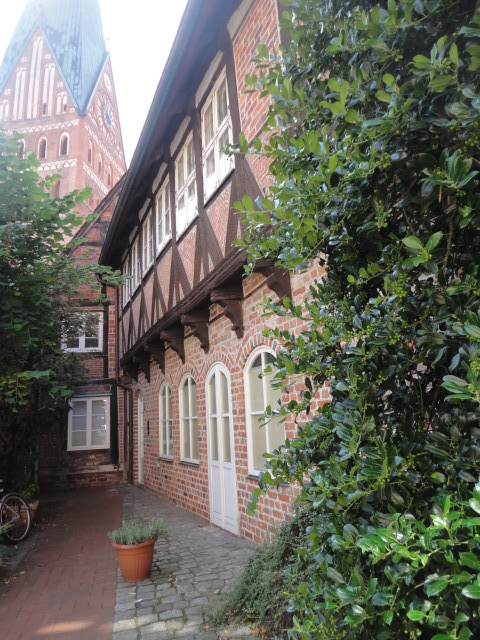 But I am lucky enough to find some small streets, where the luxuriant vegetation brings a sweet touch to the cold serious red bricked buildings.

These small streets are hiding cute little coffee and tea places, where it is easy to find your peace of mind. Like the Oldest Tea a destination for the local hipsters.

Or the Chocolate Manufaktur from Berge 26, offering various local homemade cocoa based delights. Or the Kafferosterei Ratsch, a sweet presence in town since 1919.

Some buildings display colourful decorations at the entrance, tempting the visitor to pay a longer visit in the stores.

When the special architecture does not help, some shops may chose to just took some of their products out of the street, like in the case of Wohnzutaten, introducing many vintage interior design pieces of decoration.

The Teddy bears from Freken Dina, selling products trademarked by Danish interior design artists seem to ask me to bring them home, all of them. The same temptation at Korinna Weber jewelry shop.

The more I walk the more details to spot. Some of the coloured timbered houses remind me of the architecture in Celle or in some localities in the Harz mountains.

All the historical houses are labelled as 'trade' houses but obviously some were more successful than the others in their business endeavours. As it always happens. 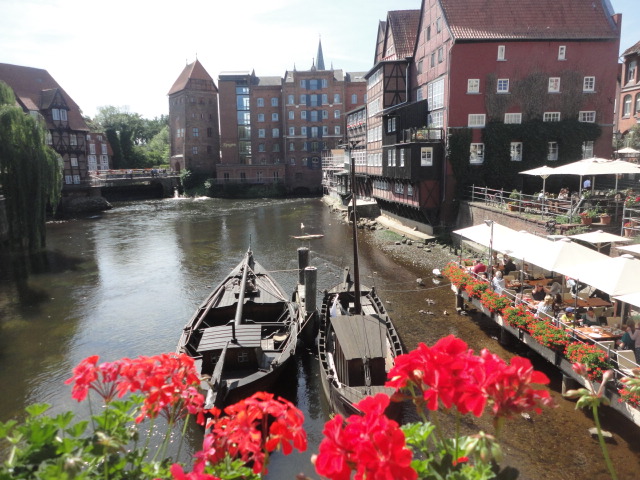 But nowadays you do not have to be successful to take a seat with a great view over the river at one of the restaurants. If you are lucky enough to find a free place, which was not my case.

Waiting for some luck, I spend my time at the Alte Krau, an old mill from the 19th century whose functioning is explained in detail part of a guided introduction. 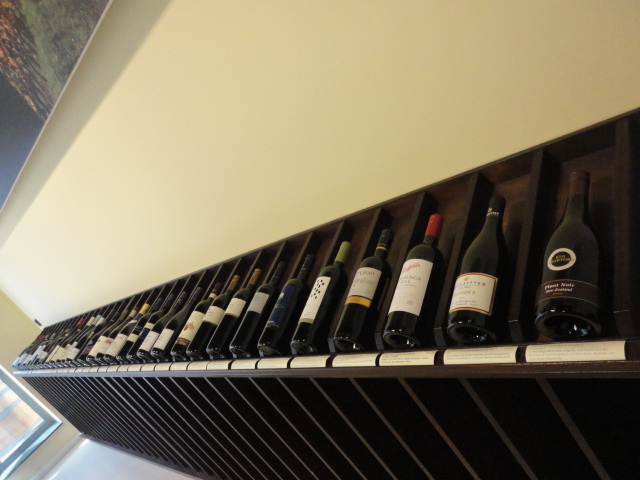 History is always interesting for me, but there are even more things to admire around. For instance, a wine collection at the Einzartig Hotel, the art from Atelier 19 or the Persian dishes from Soraya restaurant. Lünerbug Bombon Manufaktur invites adults and children to taste some colourful sweets, some of them prepared in the front of them.

I pass wooden bridges bordered by buildings with even more local products or hotels, like the Bergström, apparently one of the few top hotel destinations in the city. 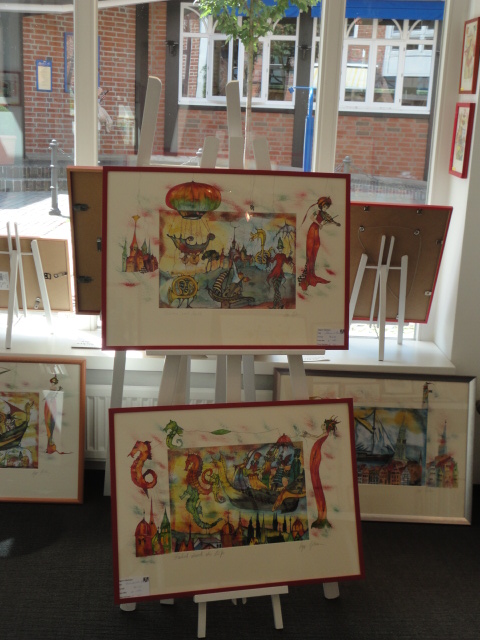 Or with some art galleries, like the Gallerie Bertram displaying beautiful book illustrations, made on the spot by the artist herself.

The smell of the fresh bread ready from the ovens of the Backstube bring more flavour to my wandering.

The same as the colourful fresh peasants products from the flea market in the front of the city hall take me to the rush and whispers of bargaining.

There is so much commotion and things to care about on the ground that I was almost about to ignore the impressive City Hall building.

Guided tours of the city hall are possible at specific hours during the day, when the authorities are not happy to celebrate weddings or other happy moments. Meanwhile, what not go on a city tour in the carriage?

City hall administrative buildings are hosted in historical houses. Seeing these cute little red bricked presences it might be a really pleasant event to go to work every day. The Council Library is a former Franciscan Convent, where you can have a curious look if you really want.

But history can wait. As for now I want to check the foodie offer, hoping that there will be more than middle ages flavours available. My expectations are answered and it seems that I have to make a difficult choice. From a Thai restaurant - Buddha Thai - whose advantage is of being too far away from the main street, to some English high end options, including high tea, like Chandler's Caffee, there is enough to calm my hunger. As I want to keep an eye on the street while enjoying the jazz rhythms of a street musician, I am set for the less sophisticated Cafe Central, where I order a quinoa veggie burger and French fries. Exactly what you can expect from such an order, and one more time, I am not convinced to include quinoa on my foodie preferences. 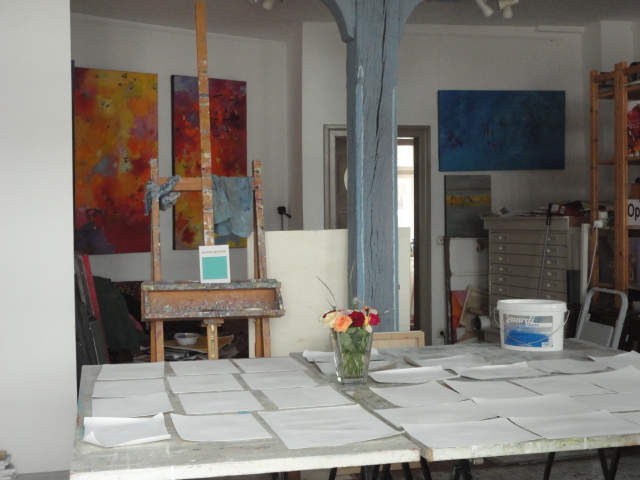 With renewed energies, I keep exploring the interesting streets, the usual mixture of modern shops and small caffes hosted in building with a romantic, historical charm. As for now, I am checking Schröderstrasse, Grapengiesserstr. and Brumesterstr. More discoveries follow, such this quiet painting atelier on Auf der Altstadtstr.

Another part of the Lüneburg history is revealed at the Salt Museum, a former mine where different stages of the salt mining, a historical tradition here. It outlines the European routes of salt, and introduce the history of this very simple, yet precious, product for our life and successful kitchen. 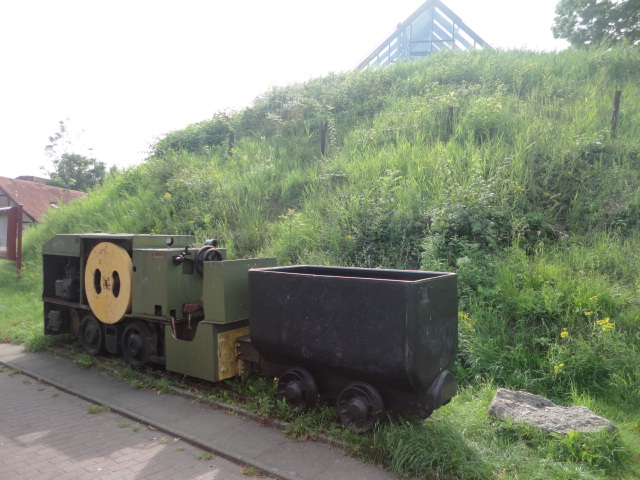 Some of the former tools used in the extraction process are exhibited outside. The mine, part of a tradition who intensified in the 16th century, following the introduction of the salt as part of different ingredients, from kitchen culture to medication, was closed in the 1980s, for economic reasons. In the old days, it used to produce around 10 tones per day.

In a building nearby, old interiors from the 1960s on were reconstructed as recent history testimonies. For someone who did not leave here during these times, such reconstructions are very helping in understanding the mentalities.

Slowly slowly I am back again near the central area, and chose to stop once more time to have a look over the city at the Brasil Coffee with an ice coffee as company. Well, I better call it just cold coffee, but was strong and not too sweet and the whipped cream brought some tenderness to the strong coffee element. 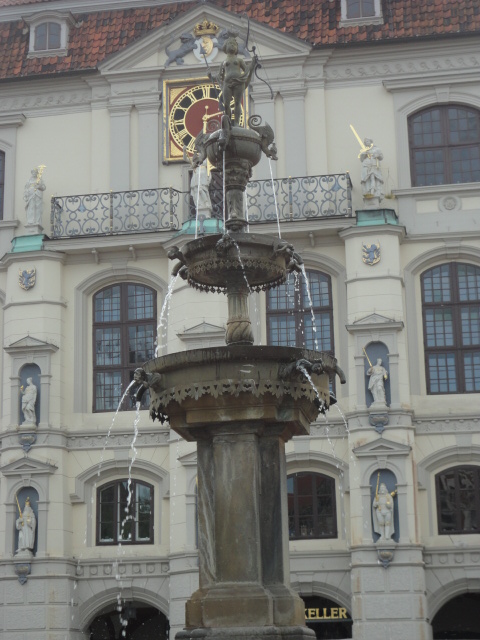 It is late in the day and the vendors of vegetables from the front of the city hall are far away. A good opportunity to admire the art of the square and the architecture of the building.

That was it for the day! A lot of interesting places and histories, everything in one place. With so many events hosted here, from classical concerts to music festivals having on the agenda Roisin Murphy, Calexico or Patti Smith, I may be tempted to come back one day, to discover other faces of the city.
For more insights from Lüneburg, have a look at the dedicated Pinterest board: https://de.pinterest.com/ilanaontheroad/l%C3%BCneburg/
Posted by Ilana WD at 12:05 AM