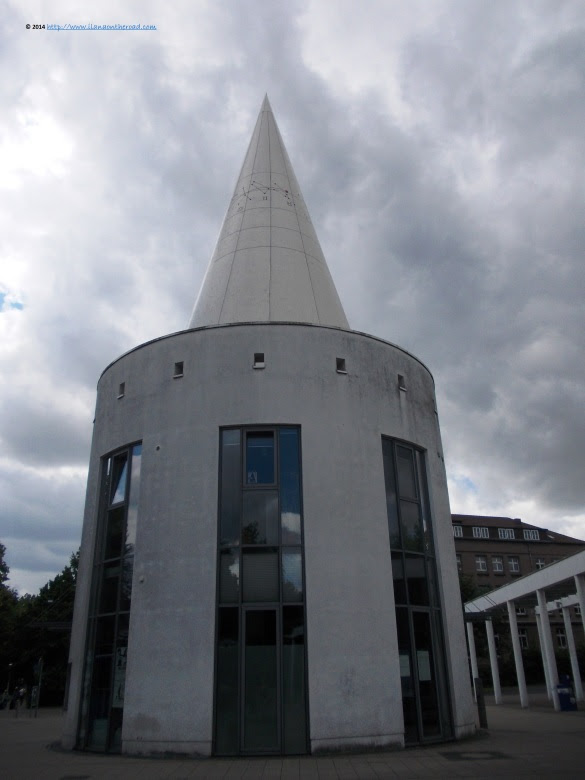 With only a couple of hours free to discover Göttingen, I felt a bit of pressure, and possible disappointment, that I will not be able to see too much of the sightseeing. But as usual in such situations, I was able to find a relative compromise to myself: what about just following the unbeaten path, trying to taste rather the surprise of unexpected stories. Shortly after my arrival by bus at the Zoo Institute, I arrived near a conical building, bordered with the signs of the zodiac. It is a monument in the memory of the mathematicians that successively discovered the asteroid Ceres, in the 19th century: Piazzi, Gauss and von Zack. Welcome to Göttingen, a city famous for his scientists and the tradition of university life! 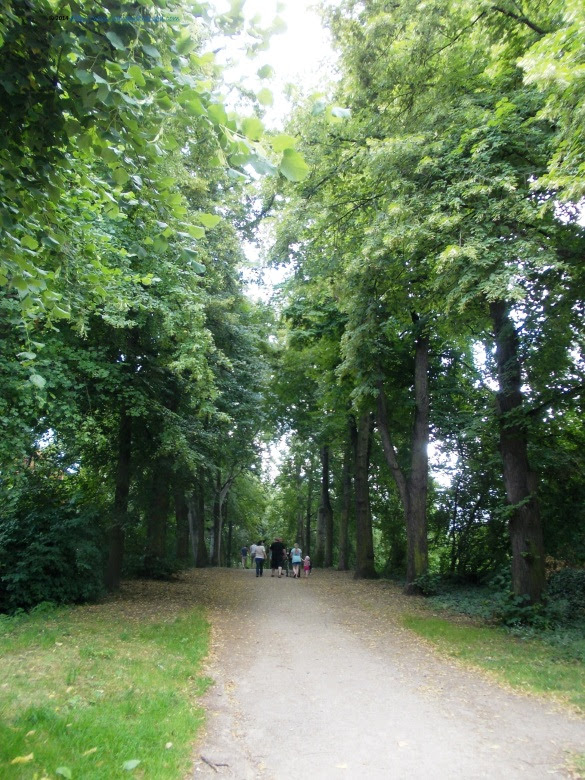 Starting from the vicinity of the central station and till the old city, slices of green, with benches, trees and enough space for jogging and biking called me for some meditation before being exposed to new scientific information. Given my poor achievements in high school, I would better stay around in the woods. The parks crossed urban areas, like Augustrasse, Gartenstrasse, Berlinerstrasse. The shops, some of them open on Sunday, displaying Asian foods or Anatolian carpets or restaurants covering flavours of the world, from Vietnam to Italy, were the reminder that I am not yet in any of the natural parks I visited the weeks before. 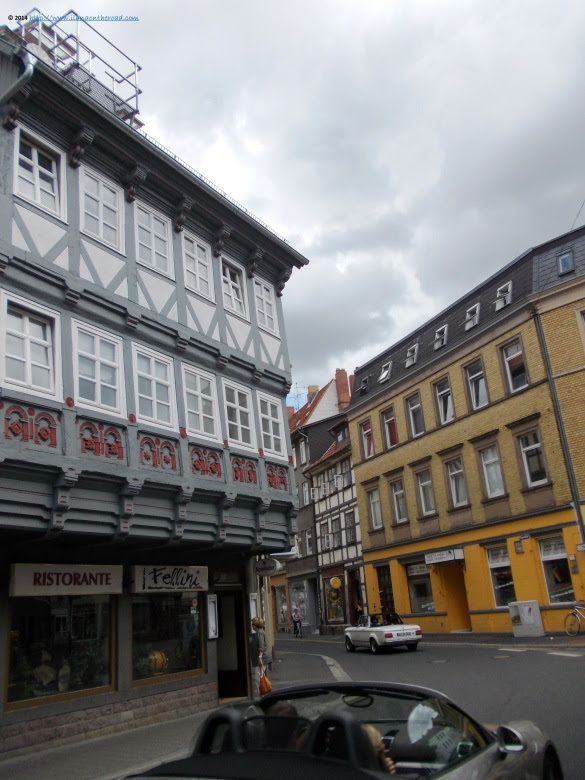 Leaving the parks, I arrived at Johanistrasse, the perfect square to observe the local world while sipping your coffee. Half-timbered houses hosting posh restaurants or shops told stories about the good relationship between the rich past of the city and its present. 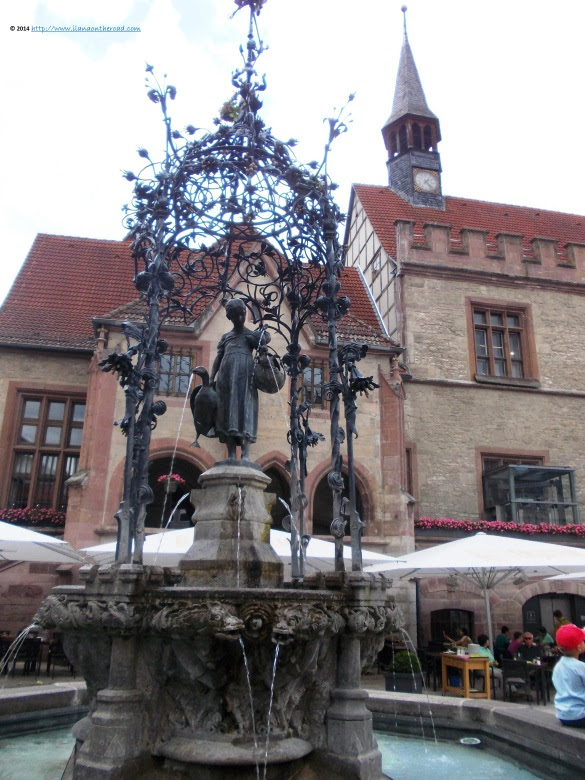 The delicate Gaenseliesel (Goose Girl) in the front of the historical city hall, is the favourite background for graduation photographies of the fresh doctors from the local universities. No one was celebrating around this time. However, the young spirit always present in an university city is changing completely the general mood of a historical city. The streets were echoing various languages, especially English, talked not by tourists but by short or medium-term residents of the city studying many of the academic specialities. 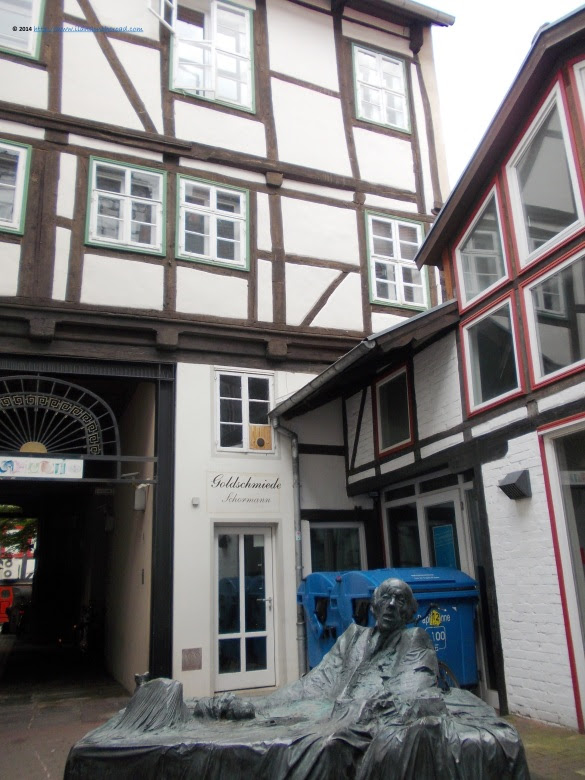 The dynamics of the city area given also by the spectacular statues appearing in the most unexpected places. Even though the artistic message is not always very clear, any encounter with them put your mind at work and it's at least half way the effect expected of art on the daily human existence. 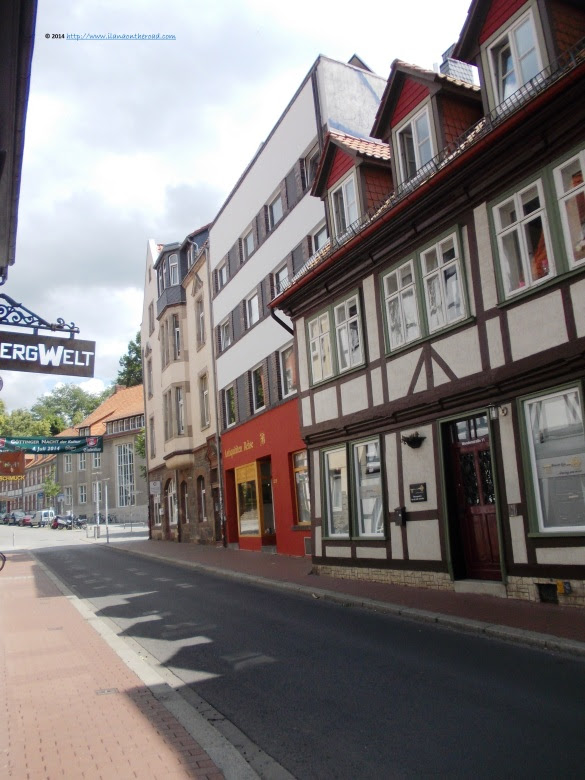 The colours of the old city are inviting for more and more walks. My favourite architectural discoveries were on Kurze Geismar, Bruystrasse, Rote Strasse and Wendenstrasse. Don't forget to keep always an eye to the small interior yards where special cultural events may take place. As I visited a couple of hours after a night-long of events and various cultural events, most places were quiet. However, there were many gourmet restaurants and summer gardens that might require another visit in the city as soon as possible.  Most of the houses were built in the 16th-17th century. 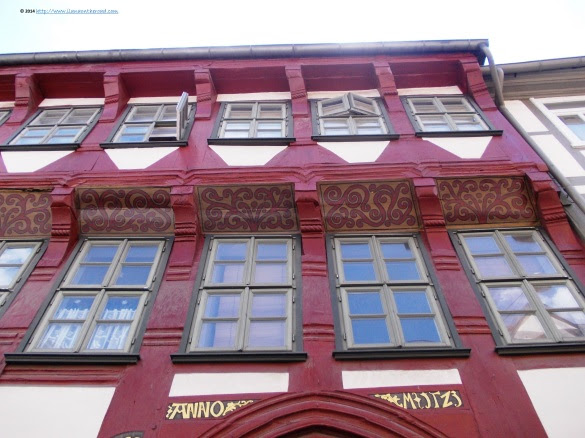 As in the case of Heidelberg, another university city I visited the last year, the visitor should pay attention to the mentions of the famous visitors that lived or simply spent some time sharing the knowledge accumulated in the high-ed establishments. Among them, Benjamin Franklin, philosopher Heinrich Ritter, Maurice Halbwachs whose writings about memory and history were fundamental in developing my own PhD work. 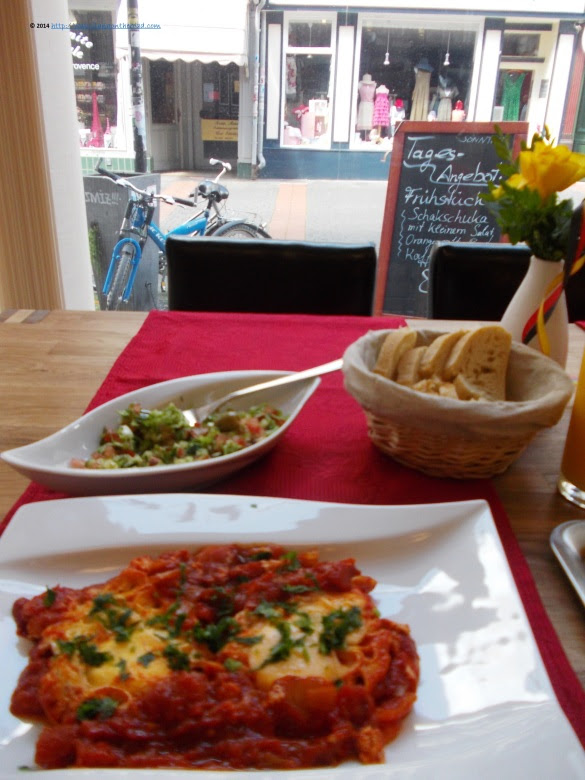 Although my time in the city is limited, I cannot resist the temptation of having a brunch at the newly opened bistro Löwenstein, for a good salad, with many spices and nuts and a delicious shakshuka, prepared according to the highest standards of the recipe. The bistro is serving vegetarian meals, of Middle Eastern inspiration and even though the place in itself is rather simple, the meals and the friendly customer service may call you back. 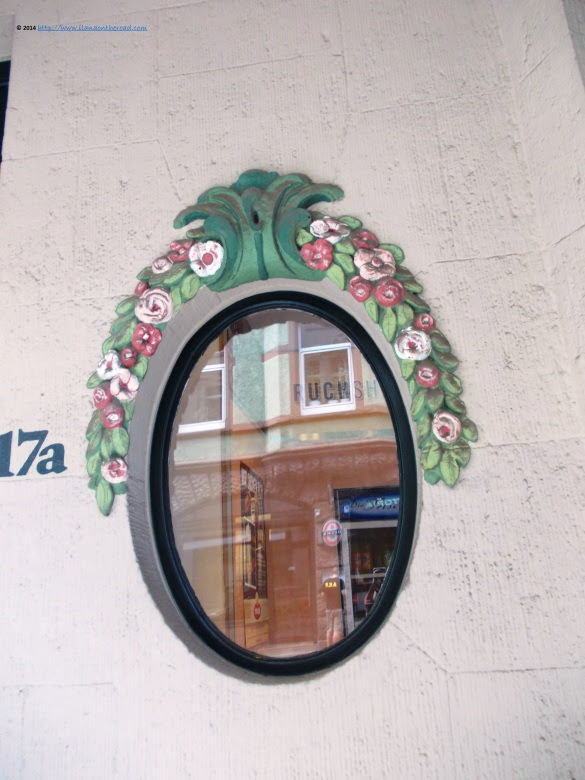 For me, it is time to go on the road again, for more rapid discoveries. As I go further in the central part of the city, most of the buildings were erected in the 19th century, the predominant style being Art Nouveau. The style goes very well with the creative spirit hosted by the universities as well. 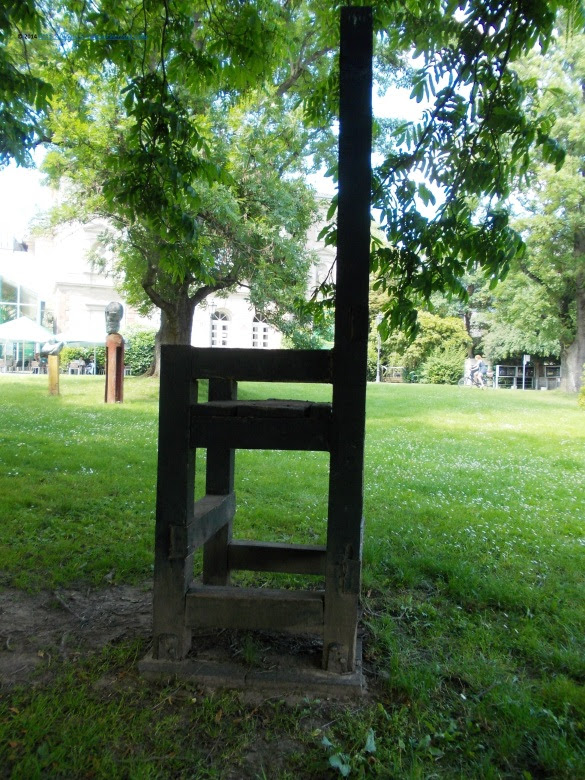 At the end of the Theaterstrasse, a mini open air exhibition in the park, in the front of the building of the Deutsche Theater. The good weather encouraged many of the locals to give up any inhibitions and take some sun baths, eventually with a book to keep an elevated company. 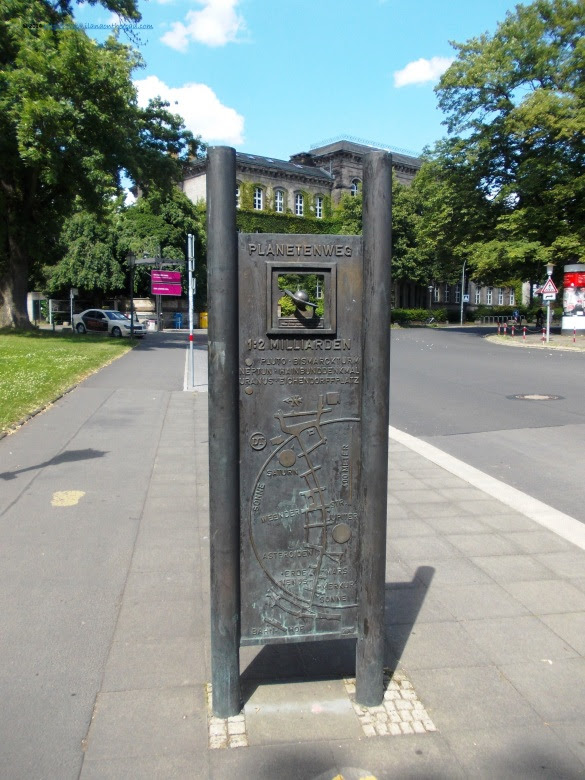 On the same street, I observed another itinerant scientific project 'Planetenweg' taking place in different points in Göttingen , aimed to outline various astronomic discoveries, many of them made by scientists that studied in the city. 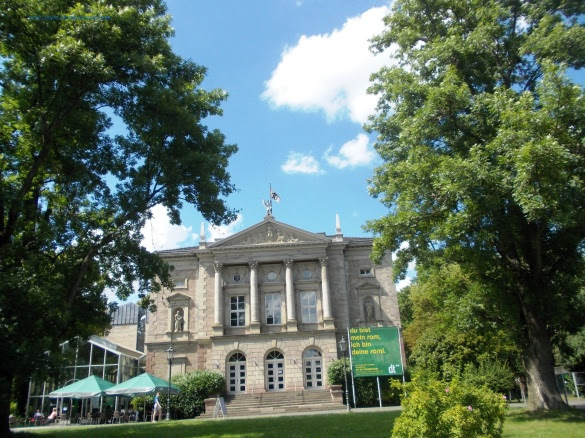 The German Theater is one of the most serious cultural institutions in town, presenting a varied programme, featuring classical theatre, but also music festivals or short plays. Keeping up with the specific of the city, it also includes Bertol Brecht's play, The Life of Galileo. 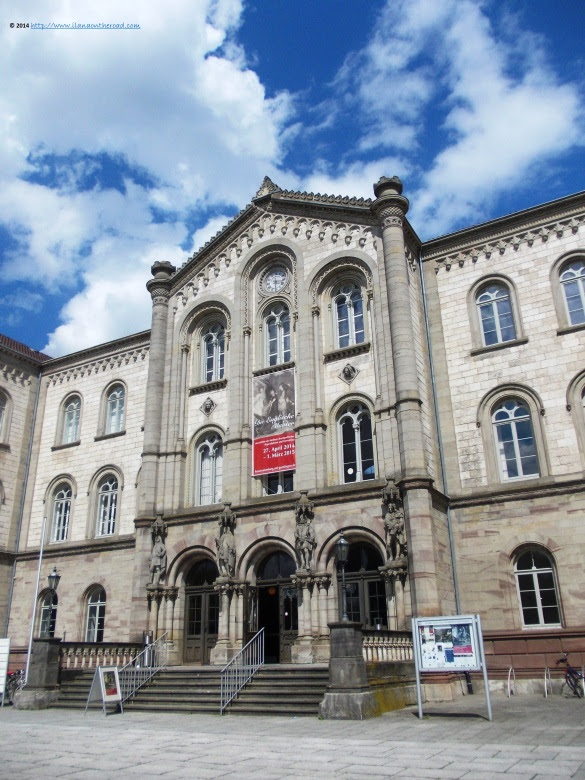 After an unsuccessful try to visit the Stadtmuseum/City museum, I succeeded to visit the last 30 minutes of the Art Collection hosted by the Art Academy. It includes a collection of various reproductions studied regularly by the students, but also a temporary exhibition open till March next year, about English Mannerism, gathering also interesting information about the way in which the English style entered the German lands, especially through the connection of the house of Hannover. 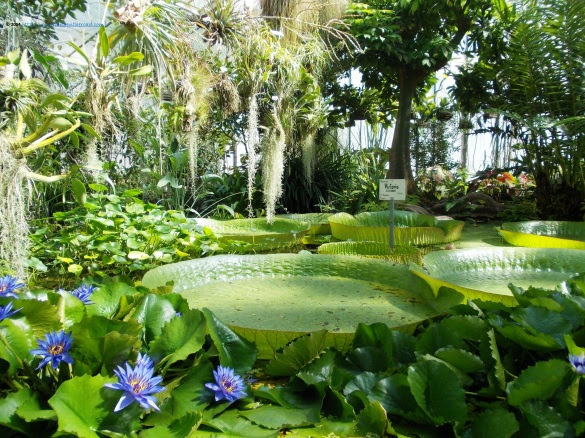 The Botanical Gardens, with its special collection of cacti, was one of the best moments of the trip, because it allowed me to keep enjoying the beautiful sunny day while learning something new about the city. The entrance is free, and there is also an open air garden. 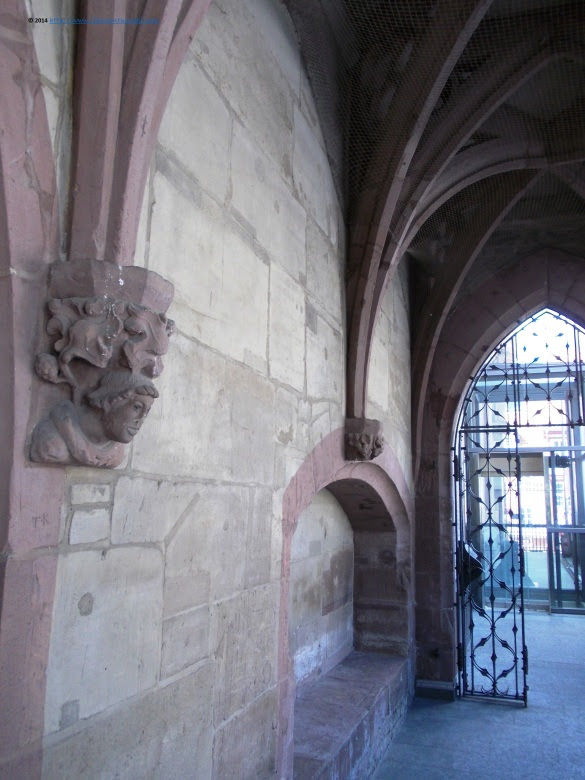 Back in the old city, I had a look at the old city hall, that can be visited in more details. The main hall has a wall painted representation of all the German states. The city hall was initially built in the 13th century, but fundamentally repaired several times, the most dramatic taking place in 1981. 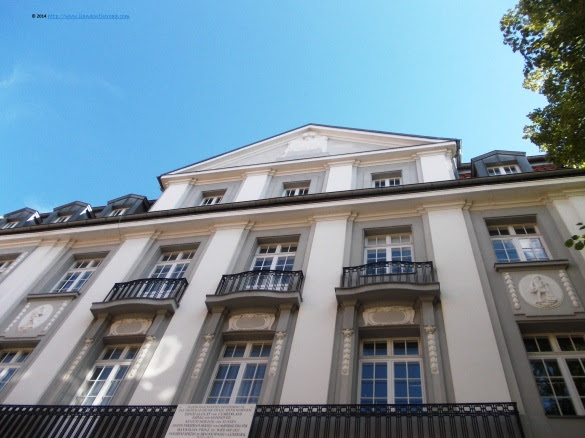 As I still have some time left, I am exploring Goethe Allee, with its elegant Gebhards Hotel, a Romantic destination in the city since the second half of the 19th century, but also with Michaelihaus, where Gauss and Benjamin Franklin, among others, conducted various experiments later considered significant contributions to the advancing of aerodynamic knowledge. 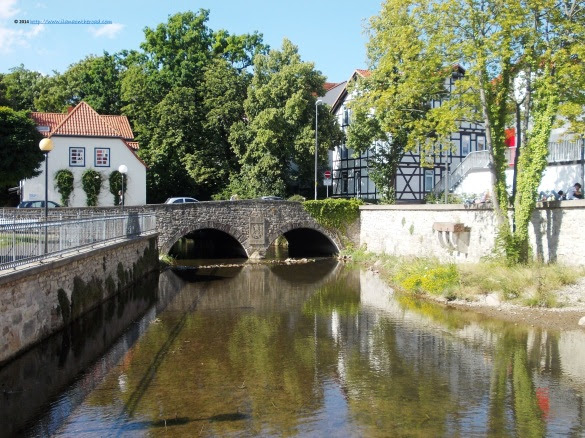 Leinekanal is a quiet spot, especially for many of the barefoot students. With many icecream parlors and restaurants around, the alternatives abound. 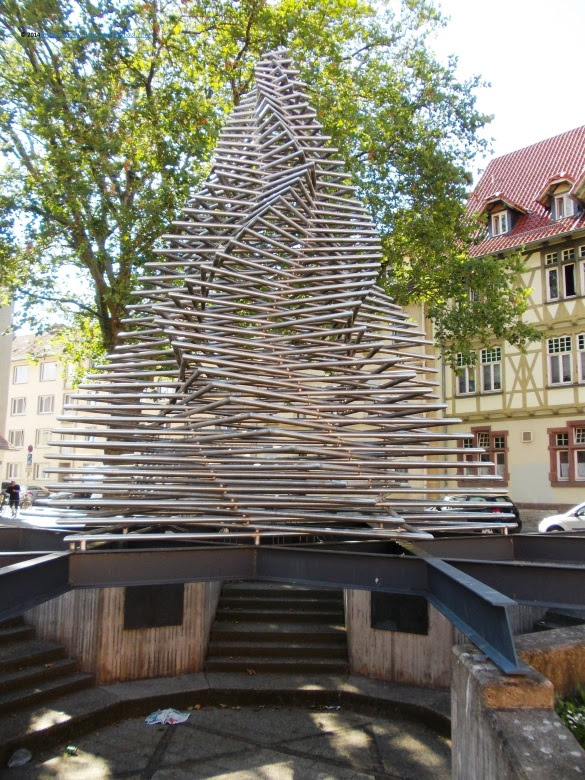 The last stop was at the monument from the Synagogue Square. Built in 1973, it is situated on the place where the local synagogue once stayed before being destroyed in 1938. The monument, that doesn't look very much cared of, has the name of the victims murdered in WWII.
On the way back to Berlin, while trying to fill in a useful way the long 4 hours of bus ride, I modestly congratulated myself for discovering a new city that calls me back soon.
For more insights from Göttingen have a look at the dedicated Pinterest board: http://www.pinterest.com/ilanaontheroad/g%C3%B6ttingen/
Posted by Ilana WD at 11:00 PM