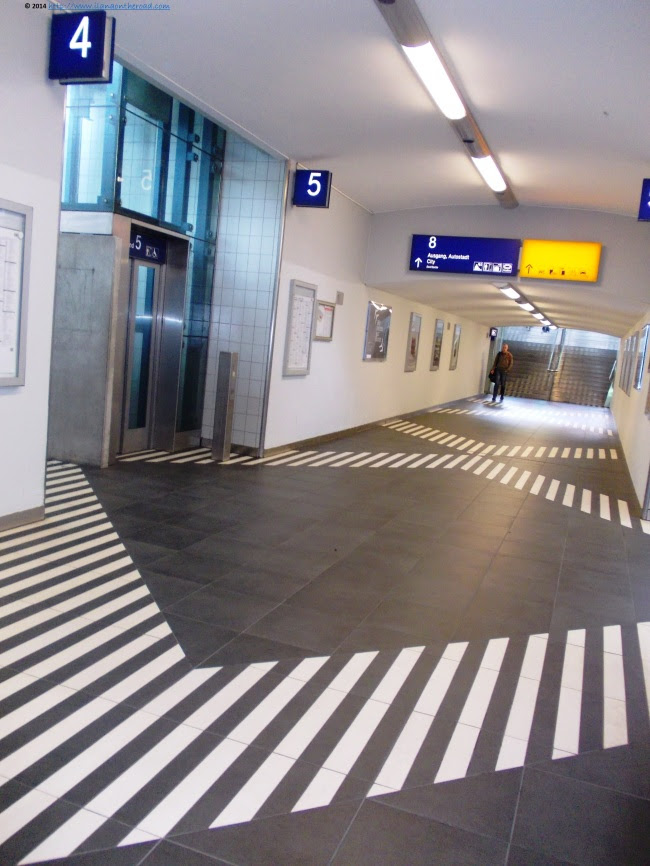 A couple of years ago, I spent one full year in the Toyota City which is, you guessed correctly, where the famous Japanese Toyota cars are manufactured. After commuting by car to Nagoya, I was back to my small hotel room home ready to go back again, as I did not have too much entertainment - if any - in my special city. With those memories in mind, I avoided for a long time to visit Wolfsburg, a city largely built around the Volkswagen car factory. But after a bit of research, I instantly decided that I should go. as there must be some hidden gems waiting for me.
First encounter: the art project at the train station, developed by conceptual French artist Daniel Buren, part of a larger trend among the train station designers in Germany, to bring the beauty in the middle of the busy transportation centers. 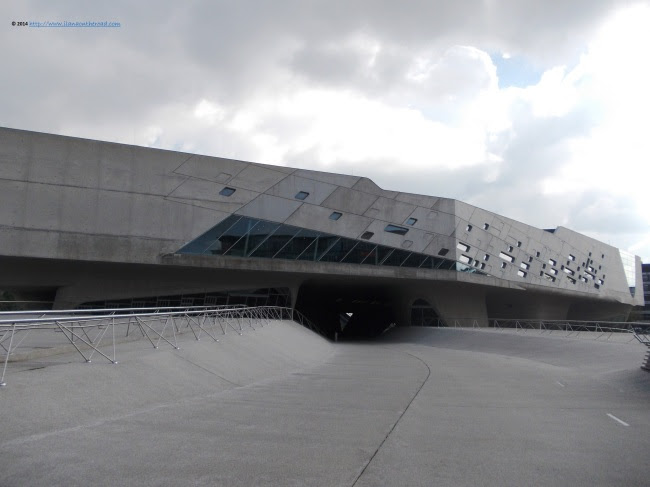 The next surprise, the massive presence of Phaeno Science Museum, designed by the world famous architect Zaha Hadid, an unique architectural and scientific project and one of the most important of this kind in Germany. 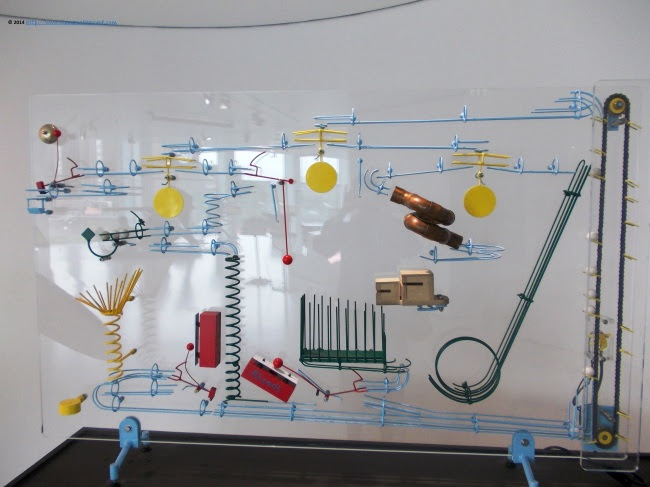 The architecture surprised me, but even more surprising is the interactive exhibition itself, which explains almost everything about nature and science, in a very simple and dynamic way. Even the most complicated physical theories and concepts, as well as natural phenomenon - do you really want to feel a tornado? - are clarified to the simplest non-scientific brains. No wonder that classes of children are visiting the museum regularly part of their daily learning curricula. I only have a huge regret that my scientific education stop at a certain moment in life, as I felt overwhelmed by theories and equations, without a direct feeling of the natural laws. More details can be found on my YouTube works here and here and here. 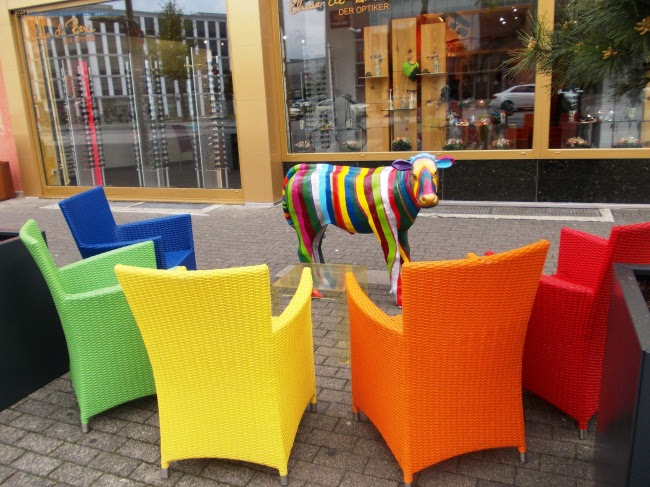 I leave with huge sighs of deep regrets Phaeno, but the colourful presences on Porschestrasse help me to diminish my sadness for the lost wasted school years. 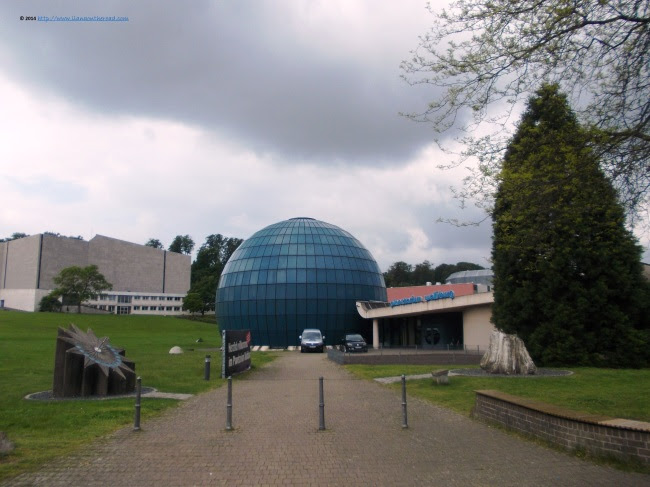 Those interested in astronomy can continue the experience at the Planetarium. 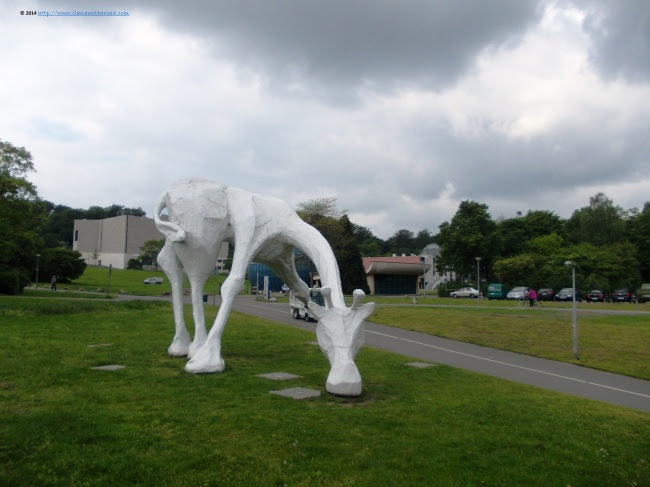 As the Planetarium was closed at the time of the visit, I used my time trying to understand the hidden messages of the massive art works spread within the park around. 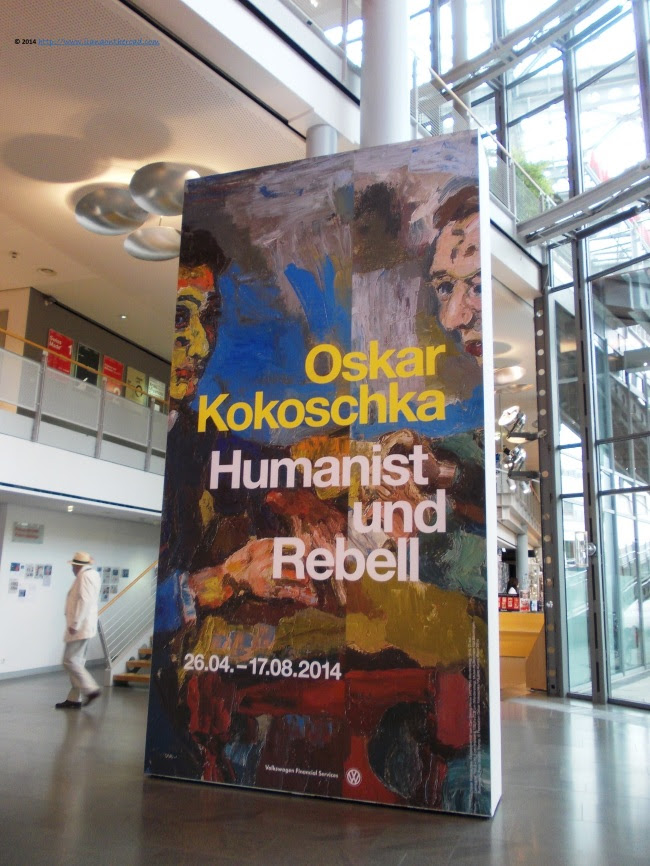 I was luckier with the Modern Art Museum, where I visited a retrospective exhibition of Oskar Kokoschka, whose special (self)portraits and representations of reality send more than a simple artistic message, but a whole life philosophy. 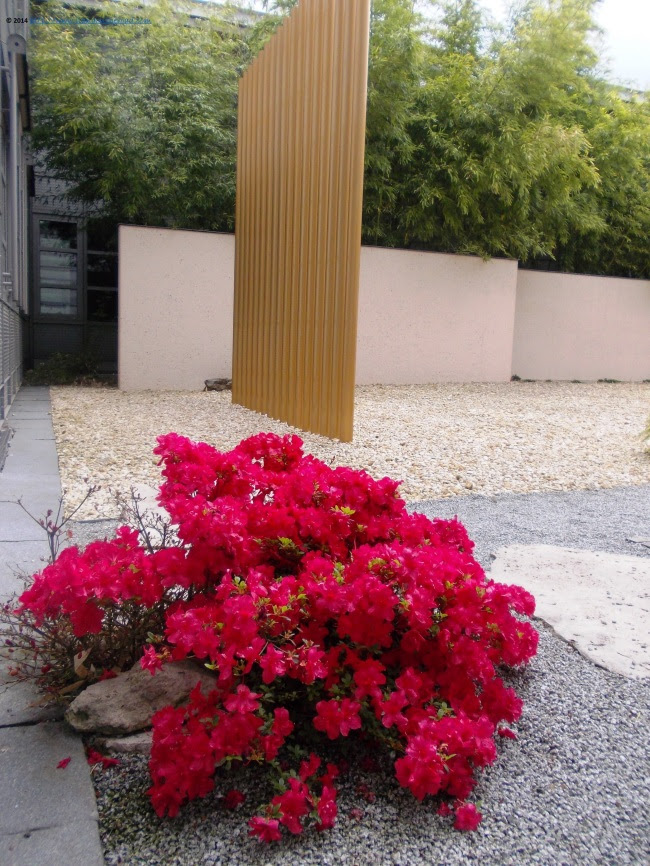 Under the strong impression of the colours and new impressions, I retired in the small secluded Japanese garden, smelling the silence and thinking about art. 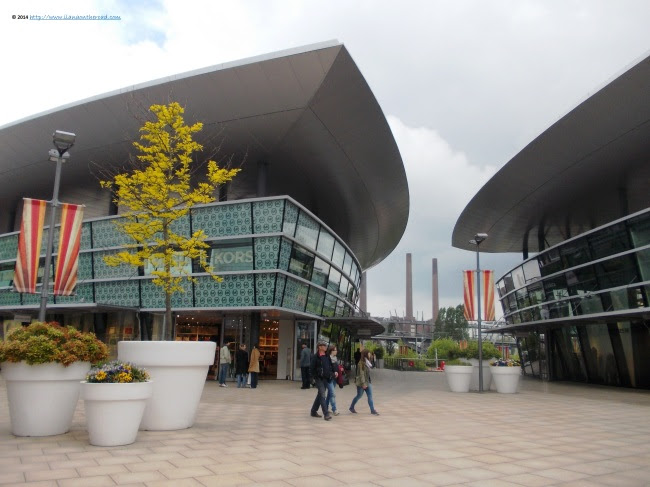 On the way to the famous Autostadt, a city within the city created around the VW  factory, I stop at the Outlet center, a bit middle level compared to other similar experiences in Europe and Germany in terms of the brands represented, but with serious discounts that for sure will convince to bring something back home. I still think why I haven't been more sure about that Creuset then? The area was not very busy, maybe because it was the middle of the week. 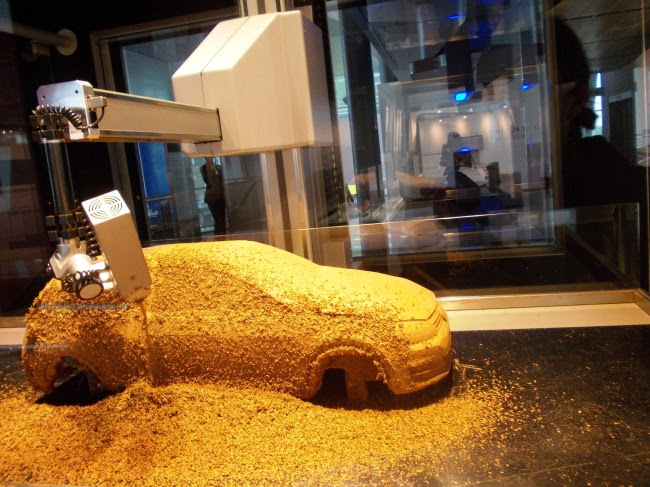 I passed the bridge near Phaeno and I am at the Autostadt. After purchasing a daily card of you plan to go in and out several times, or a simple one-way ticket, you enter in the world of high car technology. Even though you might not understand too much about cars - like humble me - a big car made of chocolate at a sophisticated exhibition about green technologies nowadays might take your blues away. 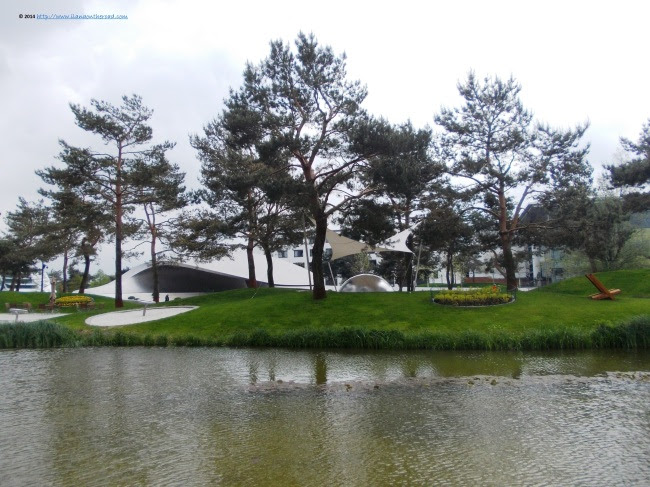 What I found unique about Autostadt, is the balance between the eclectic and sometimes very courageous architecture and the green scenery, with many parks with beautiful flowers, as well as gardens or artificial islands embellishing the spectacular steel and concrete apparitions. 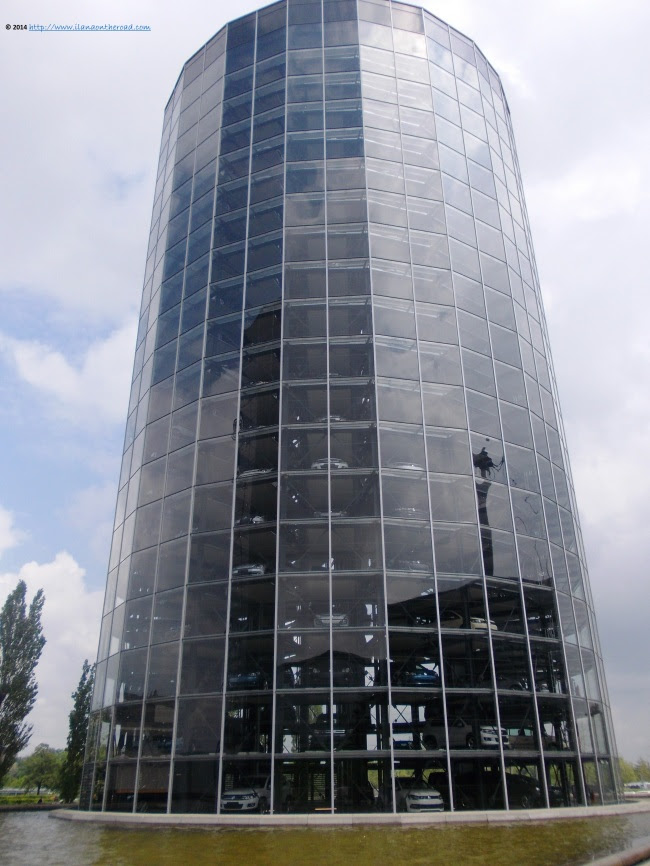 One of the most spectacular presences by far, in terms of high precision is the huge tower where the cars ordered by customers are waiting in line till an entire mechanism is put into motion and bring them on the way to their new masters when needed. True is that when I saw the robots at work at Toyota factories I kept silent for a couple of good minutes, but it seems that in the Autostadt the 'wow' effect is multiplied. Welcome to the SF world of the world car industry! 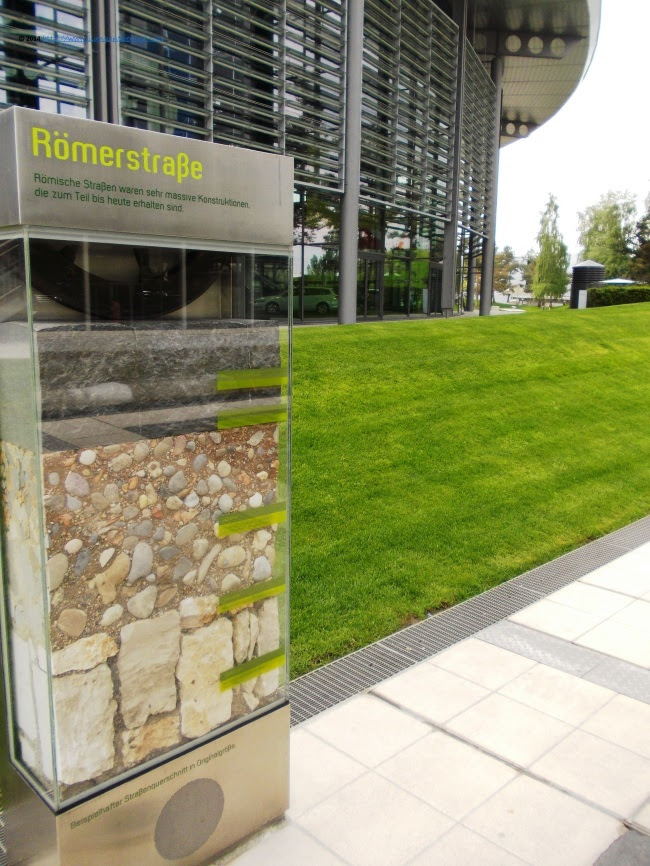 One of the counter-recommendations about visiting Wolfsburg that I received when I shared my enthusiasm for this new destination, was that it is in fact a city without history or high class elitist attractions, made out of nothing. Remains of the former Roman road that is going through the area are kept well preserved and notice their presence to the visitor though. 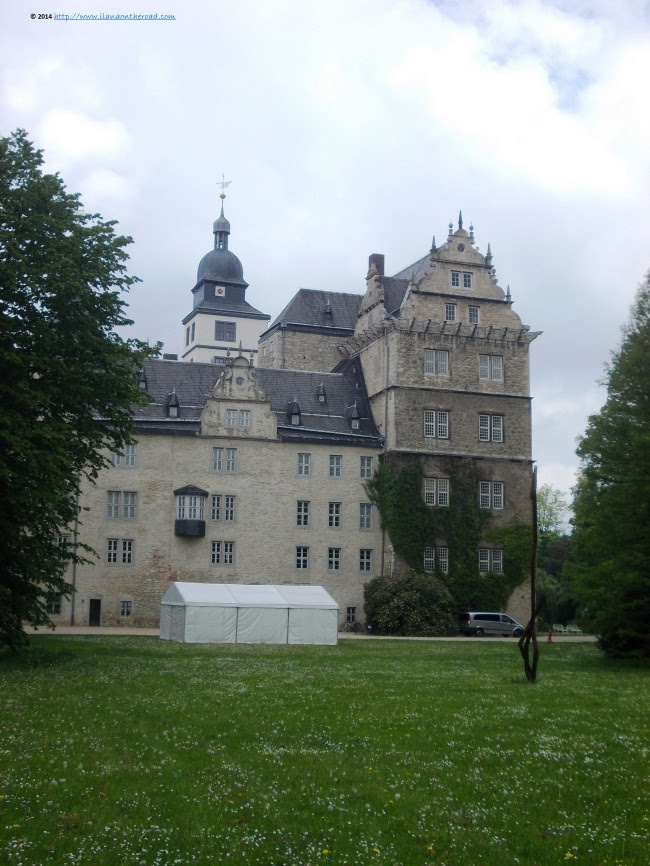 A quarter of hour from the Autostadt by foot, there is the local palace, built during the Middle Ages and rebuilt as a Renaissance construction later on. At the time of my visit, it was undergoing through massive reconstruction and cannot fully visited, but the landscape invited me to spend more time around. 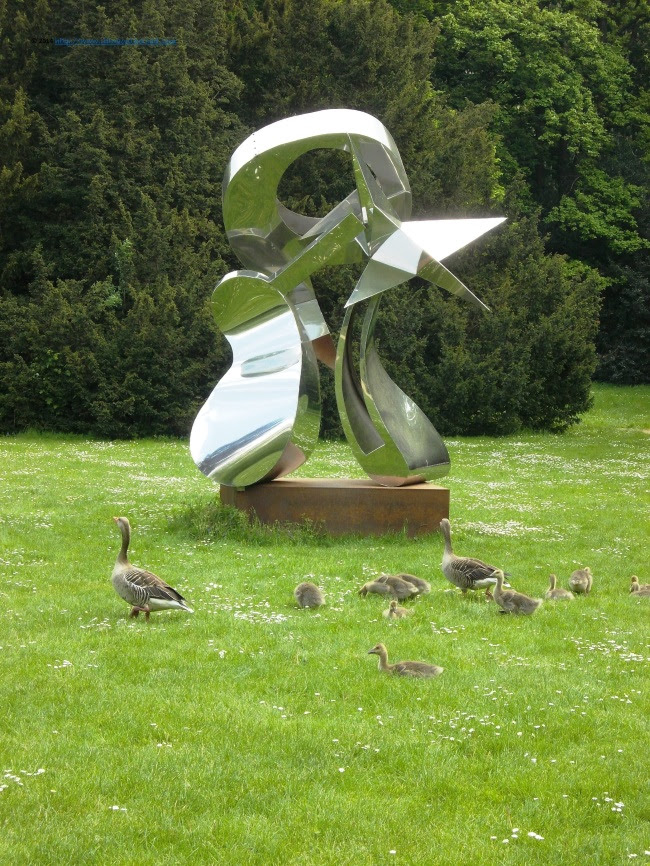 The area around the castle was used for an open air exhibition, with interesting pieces of art, that did not discourage the goose families to enjoy the good weather too. In an improvised tent nearby, art students were trying their skills of panting with graffiti on canvas. 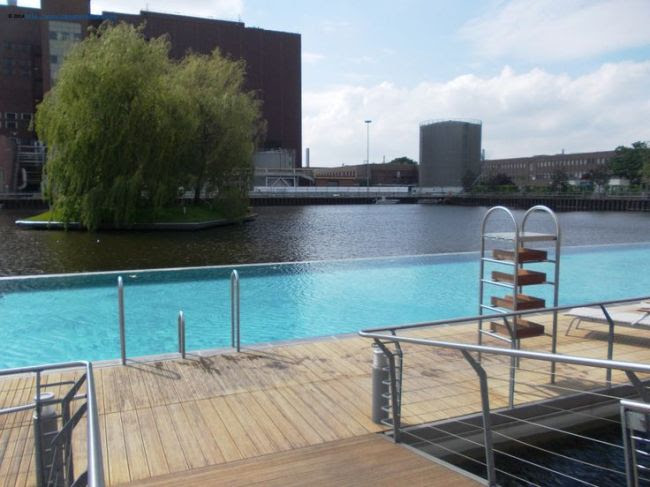 The first hours of visual and walking experiences in Wolfsburg were overwhelming at a certain extent, but the pleasant tour of the elegant The Ritz-Carlton and their delicious afternoon tea brought me back on the track. 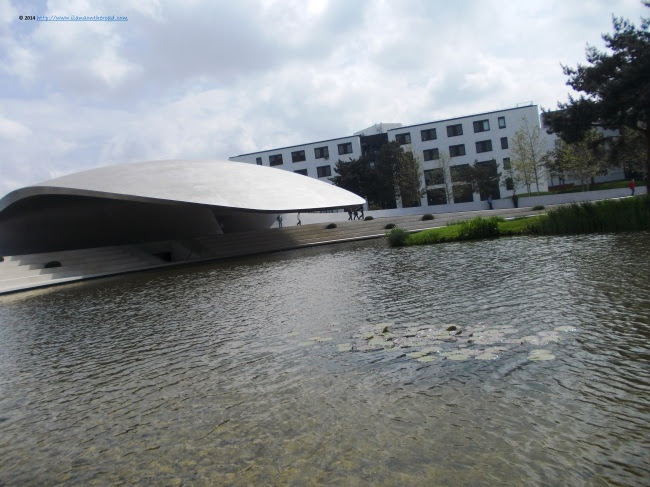 More explorations on the list: the spectacular Porsche building, whose shape is inspired by the usual elegant design of the car produced by the luxury company. On one of the walls, the revelation of the design choice of the cars: 'In the beginning, I looked around but couldn't find the car I dreamed of. So I decided to built it myself'. This is how any serious successful startup experience starts nowadays, isn't it? The weather is so beautiful that I enjoy being outdoors as much as possible. The gardens of Autostadt are encouraging me to do so. 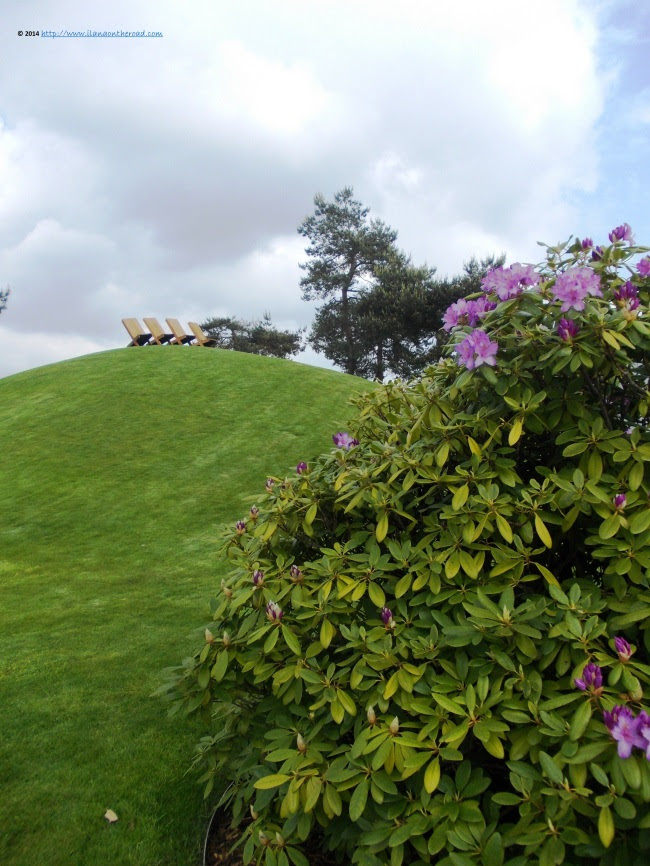 When I have too much of walking, I have the extravagant choice to rest on the top of the hill on a huge comfy chair and a perfect perspective. 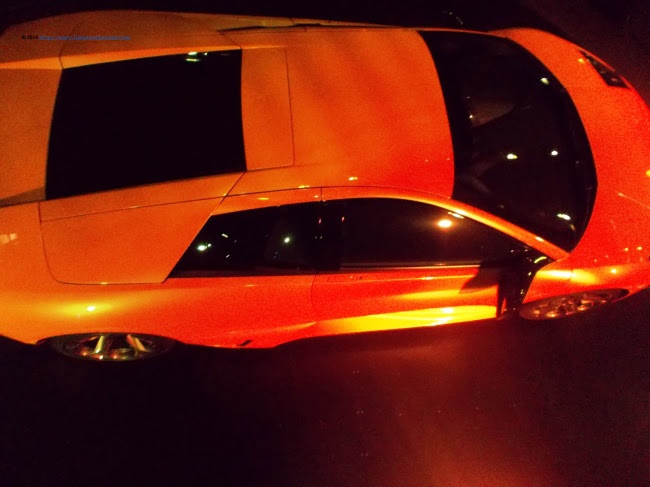 The adrenaline was brought back to the normal levels after visiting the Car Museum, near The Ritz-Carlton: a spectacular, but too noisy for my taste installation - especially the amplified sound of the scratches of the Lamborghini cars moving at fast speed - , with effects is aimed probably to impress you that much that after the show is over, you could seriously count all your money to plan your next serious investment. 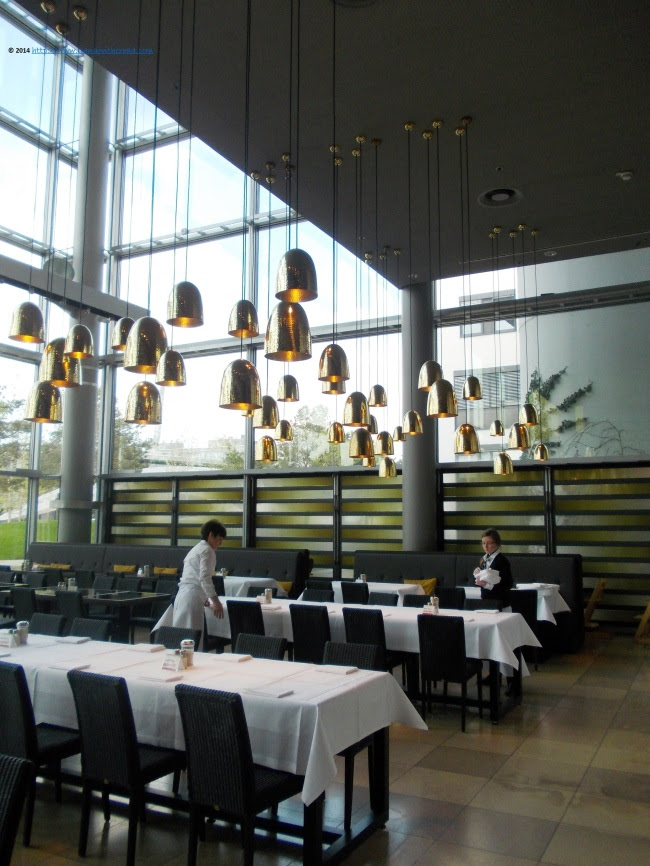 Autostadt also has an impressive gourmet choice. The top is the multi-awarded Aqua restaurant from The Ritz-Carlton, one of the top two German restaurants recognized internationally for the fine cuisine. At a different level, there is the Chardonnay, where the fresh, healthy and innovative menu is prepared by chef Daniel Kluge and its team. 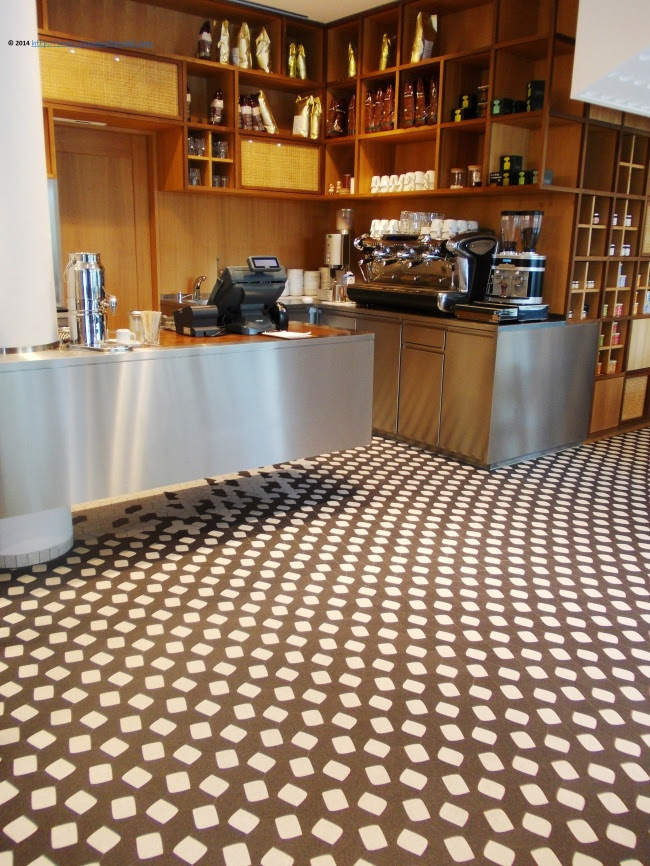 One of the newest design sensation in the little town is Das Brot, a small cozy restaurant who is both a bread manufactory and bakery. The 20,000 tiles produced in a 19th century workshop from Munich traces the path of the grain, from the field to the shop counter. A big table in the middle of the room invites the guests to share not only their impressions about the healthy food prepared, but also their space and maybe common stories too. Das Brot supplies bread and baked goods to all the restaurants in the themed park. I order a coffee and spend the rest of my time in the Autostadt outside, having a look over the groups of tourists enjoying the guided tours or taking a boat tour. 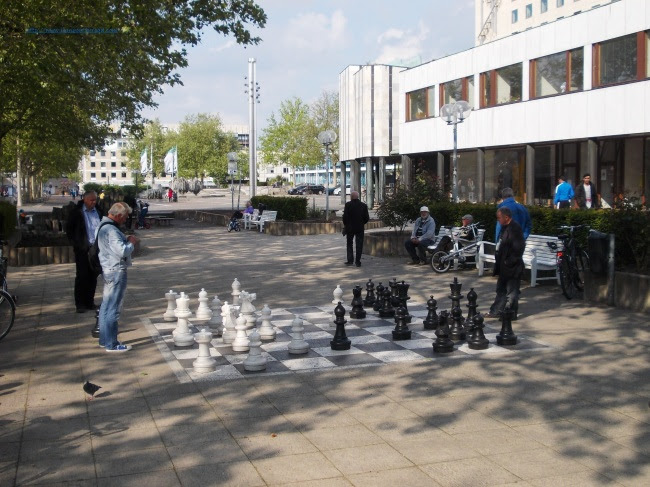 Back in town, on the same Porsche street, a group of locals are focused on the next chess move. 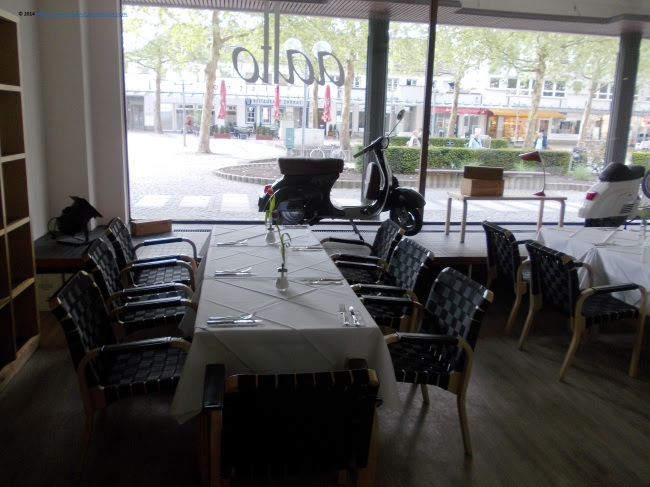 Near the famous cultural center designed by the equally world known Finnish architect Alvar Aalto, I have a look at the small bar that bears the signature of the same architectural genius. Closed for the public at the time of my visit, I was lucky enough to be let to have a look inside getting to know the unusual ambiance projected by the artist. Everything looks simple and bourgeois, till you notice the elegant pastel-coloured Vespas in the window.
This is how I probably imagined Wolfsburg myself: a bit boring and highly industrial, until I had the opportunity to spent some good hours touching science and smelling technology and my perspective changed dramatically. Another useful travel lesson.
For more visual insights from Wolfsburg, have a look at the dedicated Pinterest board: http://www.pinterest.com/ilanaontheroad/wolfsburg/
Posted by Ilana WD at 12:13 AM