A tour of Jewish Budapest 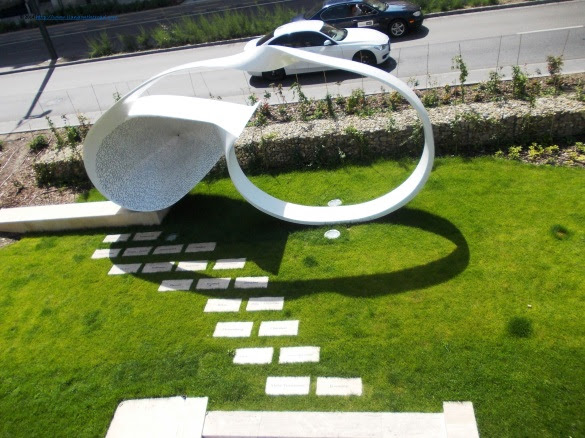 Budapest, and Hungary in general, used to have a very active intellectual Jewish life, and an equally interesting Jewish religious life. Most of the Jews were killed during Shoah, and the survivors who chose to stay in the country, had to fight, not always successfully, against the pressure of assimilation and frequent outbursts of anti-Semitism during the communism. Anti-Semitism is back now and life keeps being complicated. In and around the Jewish quarter, you keep seeing a lot of memorials and monuments in the memory of the innocent people murdered with cold blood and the pain of the past is always there. 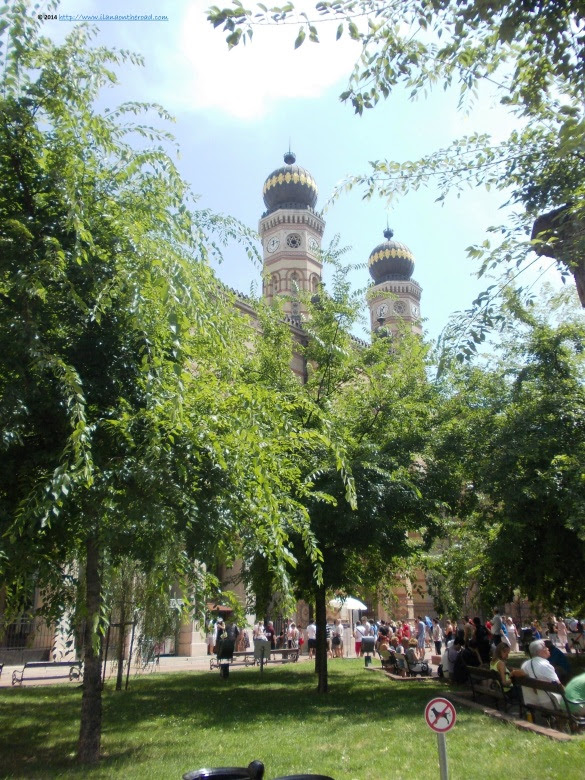 Every time I visited Budapest I went to the Jewish quarter, either for an exhibition or a visit to one of the many synagogues. But I never had a proper tour of the entire area and my memories were mostly based on stories told by friends and family. This time, I made everything more professional and booked a tour in English that explained extensively the art, history and architecture of the area, with interesting insights about kosher restaurants and daily events in the life of Budapest Jewry. The walking tours, in English or Hebrew, can be booked at the kiosk near the Dohany utca synagogue and last around 2 hours. The guides are knowledgeable and familiar with the history, and equally able to explain to both the Jewish - less or more observant - and non-Jewish visitors about customs, religious details or Jewish history. 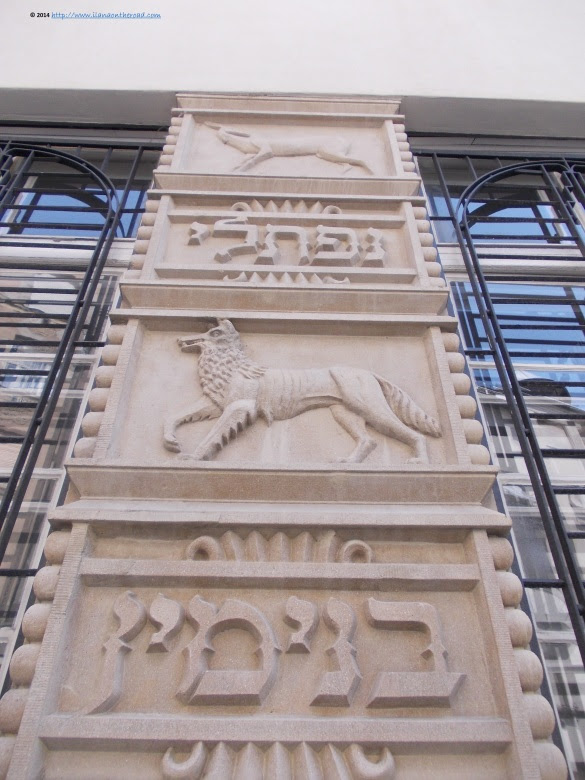 All the streets around Dohany utca synagogue have traces of Jewish history. Some of them are obvious, as in the case of Hebrew writing and symbols but some, like in the case of architecture, are only using discretely motives that can be spotted on the walls or on the old metal doors. 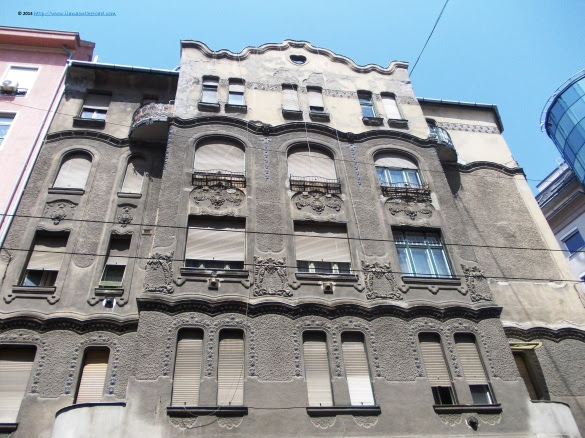 The area has precious constructions from the 19th century, with 2-3 storeys, a symbol of the relative economic well-being of the Hungarian Jews at the time. The predominant style is Art Nouveau, with a choice of decorations inspired by nature and vegetation. Most of them look like carefully decorated with a lot of love and care, just to make sure that it does not contradict in any way with the environment. 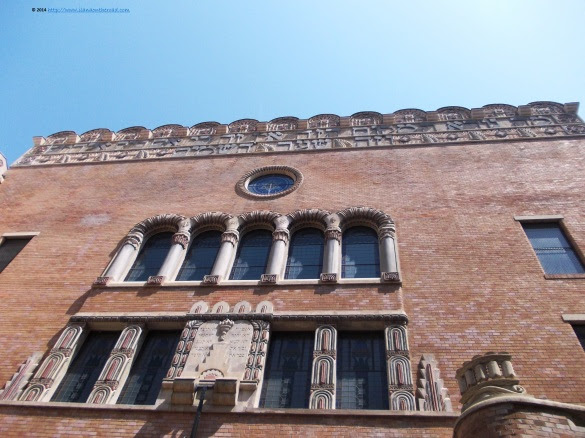 One of the most interesting discovery of this tour was the visit at the Orthodox Kazinczy Synagogue. It was built in one year, between 1912-1913, part of a larger effort to counter the Reformist movements within Judaism.  The facade, as well as the interior, seems to have some strong inspiration from the Iraqi Jewish architecture, although the construction was made by the brothers Löffler which were Europeans. The two brothers were very productive during 1908-1917, when they had their own architecture bureau, as they built almost most of the Art Nouveau houses in the Jewish quarter. 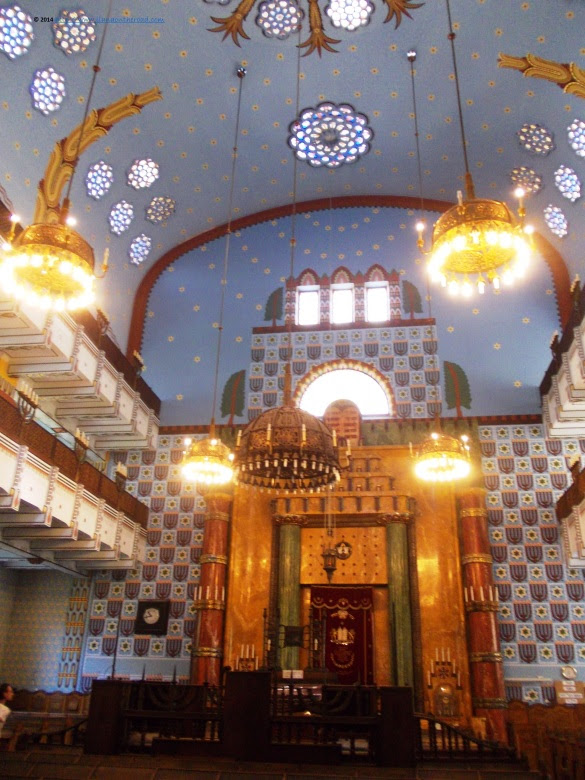 The synagogue, colourfully painted, was part of a complex that also included a Jewish girl schools. Nowadays, it is predominantly used during the high-holidays, on some Shabbats and for various tourist tours. The joyous colours of the wall paintings are contrasting with the seriousness around the Torah Ark. 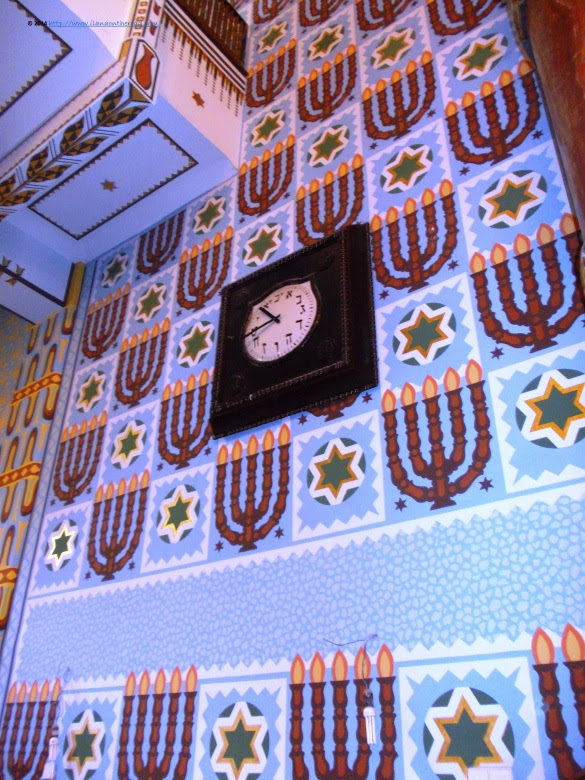 The traditional Menorah that used to be in the Holy Temple in Jerusalem is represented always with 6 branches, but because the last Temple was destroyed, the menorot on the walls of this synagogue do have only 5, as a message of incompleteness of our times. 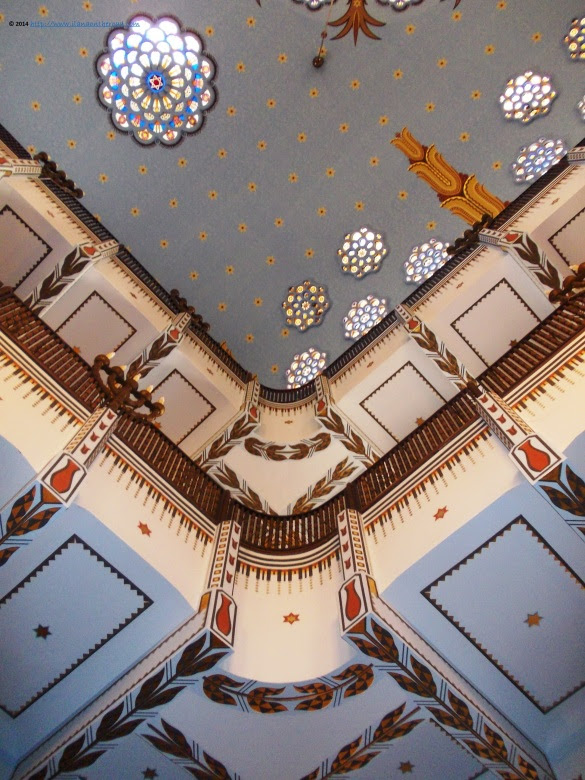 The beautiful stained glass was painted by the famous Hungarian artist Miksa Róth, imperial and royal court glass painter who also made the painted glass at the Hungarian Parliament. Heavily destroyed during the war, and even used as a stable, it was rebuilt and repainted and part of the Jewish heritage of Budapest. Especially after 2012, the street were the synagogue is situated got a new life, cultural and other kind of events organized around the year and the day, as well as many kosher restaurants and small Judaica shops.
For instance, during the night, there is an English language tour called Pub Crawl taking place in the ruins bars of Budapest, organised by AllNightCrash. It starts from Oktogon square and it covers 4 bars and a club, free VIP entrance and authentic ruin bar experience. Especially if you travel solo, there is a chance to meet other people and enjoy an unforgettable experience. 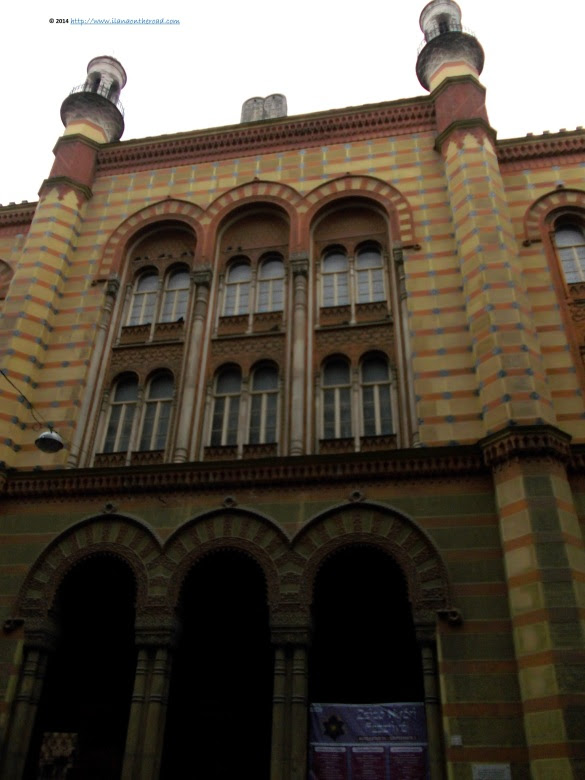 A synagogue that needs a lot of restoration though is Rumbach - in Budapest, the synagogues are named according to the name of the streets where are located. The Moorish-style construction was built at the end of the 19th century by the Viennese architect Otto Wagner. It cannot be visited, but the style reminded me a bit of some similar synagogues in Timisoara and Bucharest (Romania). 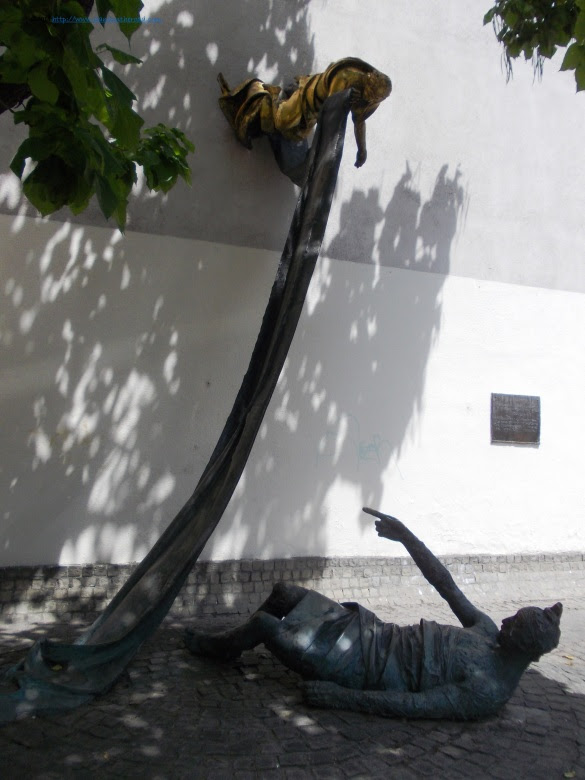 The memories of the past are everywhere in the Jewish quarter and it's impossible to not start asking questions yourself about how and why was it possible that everything happened. Before the war, Hungary used to have a very big Jewish community, of around 450,00 people, half of them being situated in the capital city. The prosperous economic situation and a relative tolerance encouraged Jews from all over Central Europe to move here. But the promises were short-term and illusory, and more than half of the population being murdered in the very last days of the WWII. 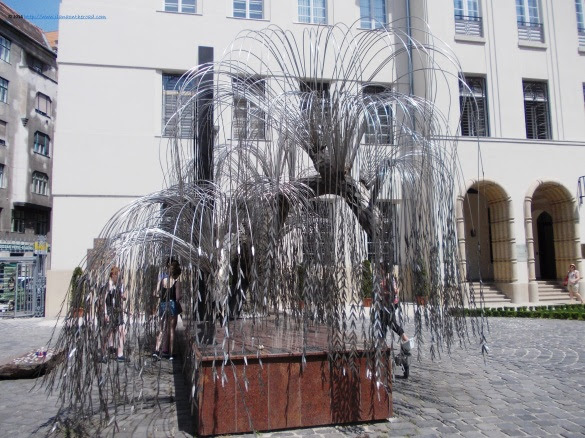 Dohany utca Synagogue, second largest in the world, hosts also a Museum dedicated to the Hungarian Jewry, as well as periodical concerts and exhibitions - years ago I visited an impressive Chagal exhibition here. It belongs to the Neologue/Reformist movement and is hosted concerts of Franz Liszt or Camile Saint-Saens. Especially during the Jewish Summer Festival, a regular week of Jewish culture and history organized since 1998, here are organized concerts and many cultural events. Last but not least, on Dohany was born the famous Theodor Herzl, who reshaped the aims of the Jewish communities in Europe. 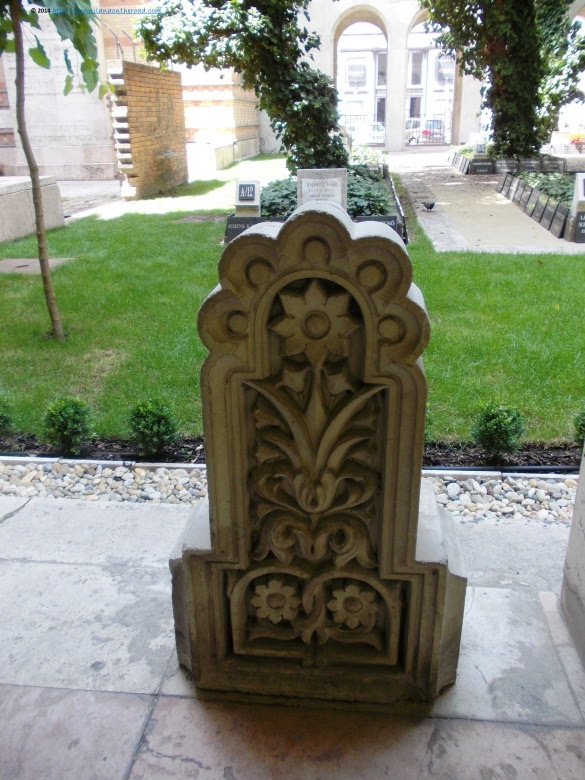 Nowadays, there are around 20 synagogues of different orientations answering the spiritual and religious needs of the community as well as of the many visitors from all over the world visiting Hungary and Budapest. In the capital city, there is also a Kindergarten, and school, as well as a Jewish center organizing various cultural events but most of the former glamour and intellectual zest was lost for ever. 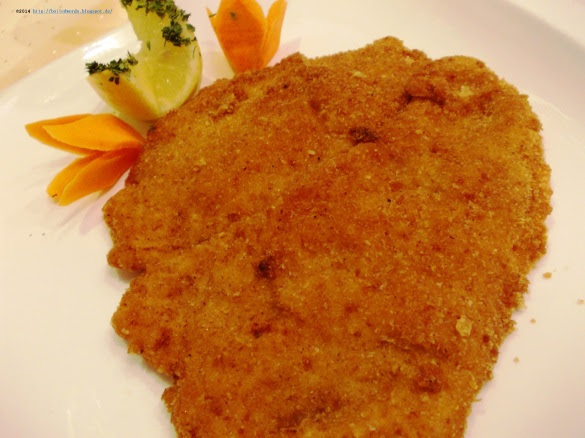 What many of the Jewish travellers will always enjoy is the chance to find a little bit of homemade food prepared well according to the highest standards of kashrut. The Jewish Budapest offers a lot of healthy, good quality and kosher food to the hungry traveller. In addition, in many big food stores, as Corso Gourmet on the popular Vaci utca, there are a lot of kosher certified food, but mostly from the snacks type. After the interesting tour under the burning sun, we made a long stop at the Carmel kosher restaurant, near Kazinszky synagogue. It has a classical ambiance of Central European Jewish restaurant, with Judaica paintings and decorations on the walls, leather chairs or some comfy couches and many Cloisonée lamps. The menu offers a variety of Hungarian inspired dishes - veal goulash with Hungarian noodles, for instance - but I was rather hungry for a classical crunchy Schnitzel with hummus and French fries. Call it my usual comfort food when I miss my childhood. 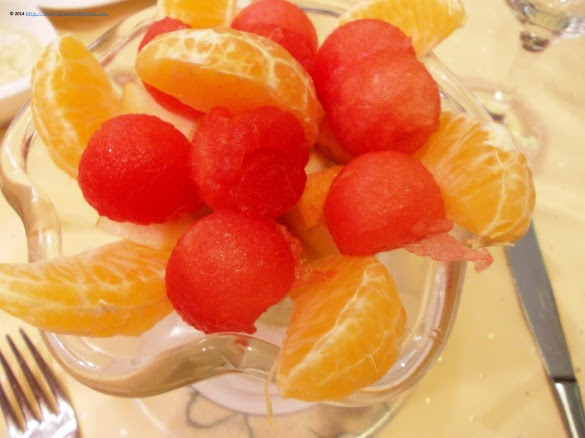 The fruit salad - apples, water melon and oranges - was a bit of disappointment, and the service was slow - the disadvantage of not being part of a big group of customers, but otherwise, it was good to have a stop in the air-conditioned space after so much walk and being fed with so much information. 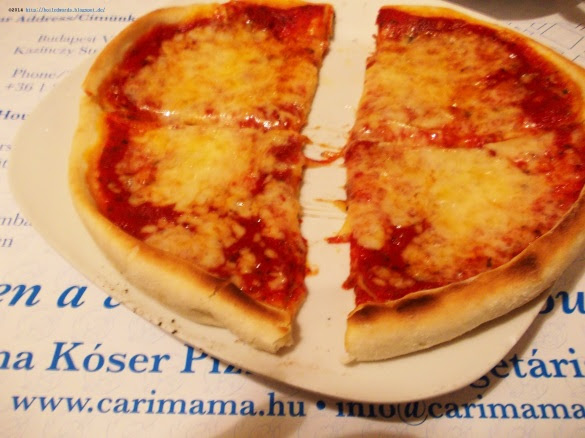 The food temptations brought us more than once in the Jewish quarter of Pest during our stay. Another afternoon, we were back for a slice of cheese pizza at Carimama, a very small but welcoming dairy pizzeria. Is very cheap, tasty - although a bit too burned and too salty - popular among tourists on the run and with a very fast service. 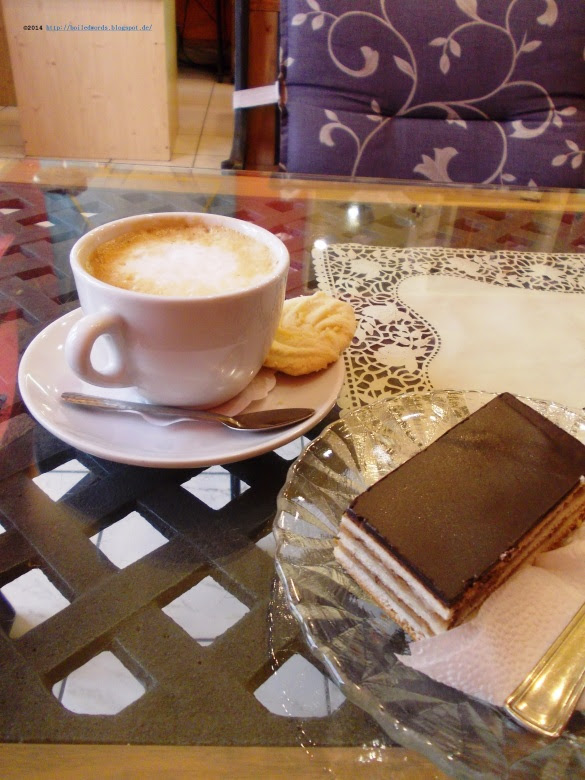 I could not have the heart to leave Budapest without at least one stop at the historical Fröhlich, the oldest kosher pastry shop in Budapest, who deliciously survived the communism to bring us today a lot of delicious sweets that I'm glad still exist. Their speciality is the flodni, a mixture of apple, walnut and poppy seeds cream stuck between dough layers and a coverage of caramel and there is also the famous Hungarian dobos, delivered kosher style. As for me, I was too nostalgic for a slice of ishler to answer the call of any other temptation: layers of nuts cream between creamy biscuits with a caramelized sweet chocolate cover. The sweetness of every bit is getting deeper and deeper. The ambiance is also pleasant, with a very friendly lady that makes you feel like you are just back in your lost home. 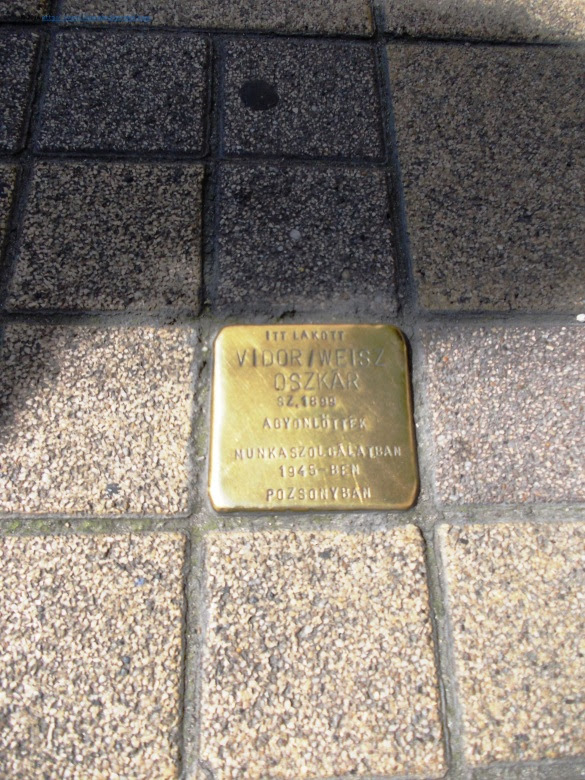 Jewish Budapest quarter has a lot of stories to tell, most of them about the past. For the young generation or for those unable to learn a realistic story of their past memory benchmarks are needed. The stumbling stones - Stolpersteine -  a project started in Berlin arrived a couple of years ago to Budapest too, aiming to mention the memory of the Jewish inhabitants of the city, with a little golden-looking stone placed in the front of their former homes. 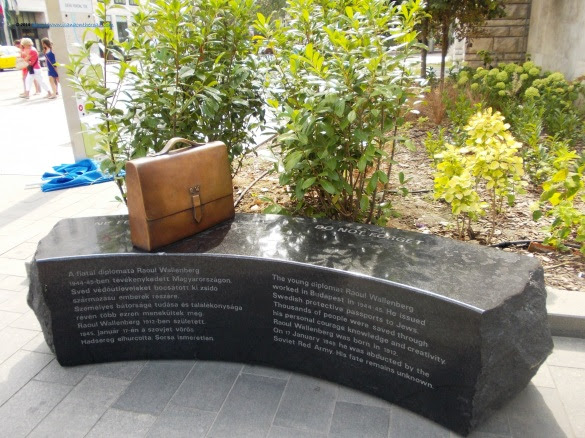 In the sea of indifference and cruelty,  little sparkling stars of humanity happen. One of them was Raoul Wallenberg, the Swedish diplomatic envoy to Budapest, who risked his own life to rescue Jews. I left Budapest, as usual, not only with the hope to return, but with the belief of hope that at least the new young generation, many of them leaving in big number the country in the last decade, will have more courage and determination to simply say 'no' to madness.
Posted by Ilana WD at 11:08 PM