The mysterious stories of the houses in Cristian, Romania 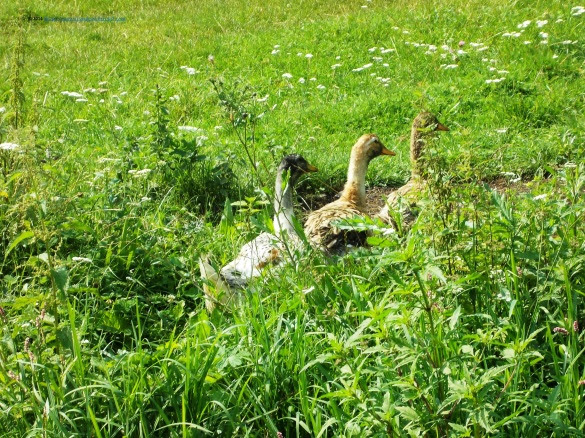 Less than 20 minutes away from the big city of Brasov in Romania - watch this space for two posts about this city coming up this week - there is a small locality, Cristian. If you like hiking and you are trained enough, you can find a way to go there through the hills around. Or stop there and explore the place hour by hour for more than one day. A small train is coming up once in a while, and the cars are coming and going very fast.  A bus or a taxi can bring you faster in this little quiet paradise. Travellers visiting the area cannot be indifferent to the quiet beauty of the place and they usually stop for a long photographic trip wandering on the small streets or the hills around. 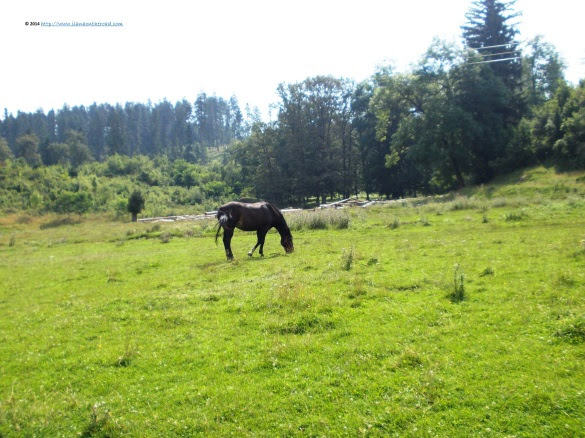 In the morning, the cows are slowly going to their pasture places, for coming back late in the evening. As within the small locality, you can easily find a lot of recluse corners, but also open areas with people grilling or enjoying the sunny weekends, close to disaffected communist constructions whose initial destination was long forgotten since. 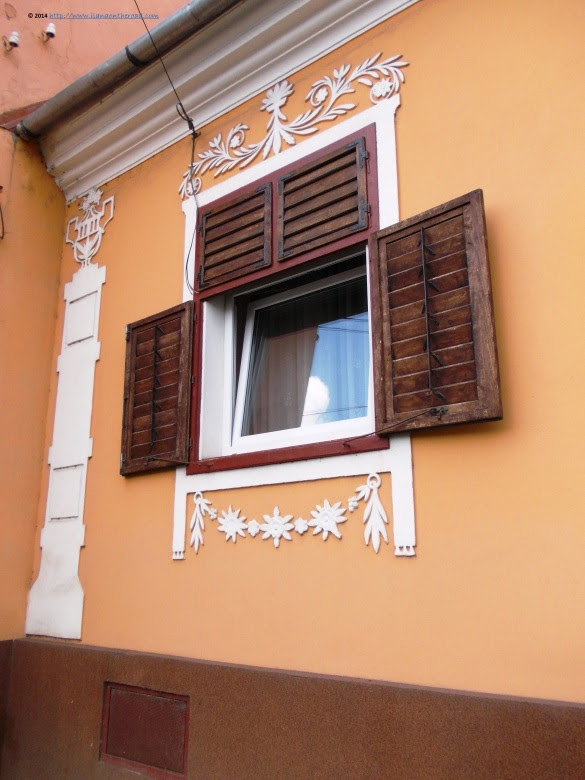 There are the houses, each with its own story not easy to be told. In most of them used to live members of the German minority in Romania. At the end of the 1980s, while the communist dictatorship was reaching higher levels of absurdity and oppression, they left, bought by the German state, one by one, and I remember how from a summer to another, we drove through empty cities, with deserted houses, with an deep sadness in the air of a place - and country - where you were unlucky enough to stay, for too complicated reasons to understand to a child's mind. 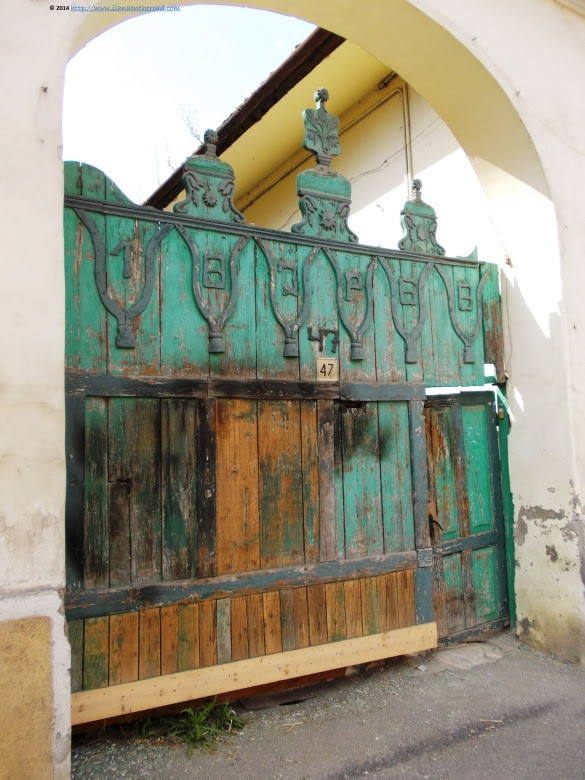 After the end of communism, some people returned and were able to buy back their former properties, some new owners took them and changed them according to their non-local tastes. Some unlucky houses were just destroyed to the ground and in their places, new post-communist villas were built on their place not necessarily following the good architectural taste but rather displaying the joy of unexpected money abundance. 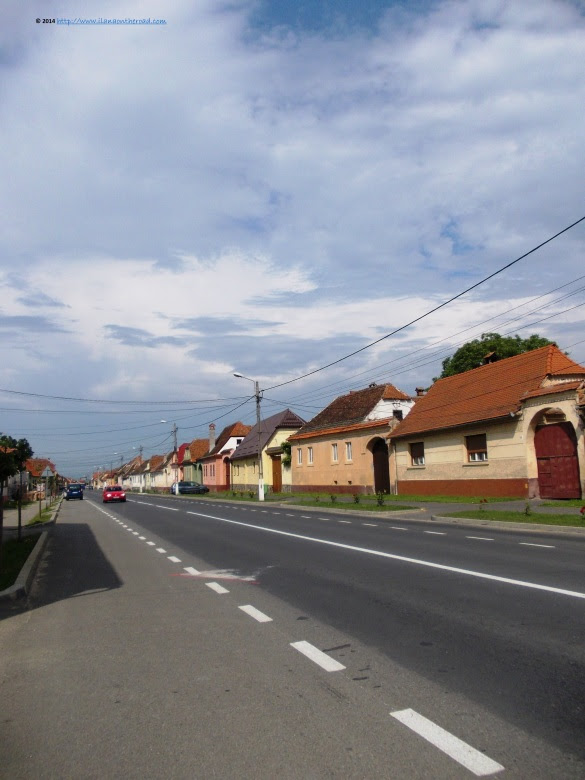 More or less repainted or rebuilt, most houses are still the same: parallelepiped elongated shapes on the fringes of the streets, with their half-circle entrances leading to large interior yards. Children are playing around or go walking with their grand parents, while their parents are working in the city or who knows, abroad in Spain or Italy. 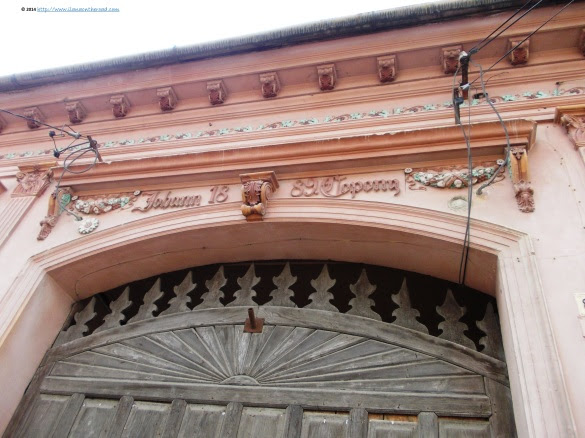 The German minority settled on the territories of nowadays Romania starting from the 12th century, for economic reasons. They used to live in compact communities in Transylvania till the end of the 20th century, when the same economic - plus political - reasons brought them back to the Germany of their forefathers. Called 'Sachsen' or 'Schwaben' depending of the region they were originally from, they speak an old German dialect that used to be for a long time for me the only German language that I knew. (No excuse for my clumsy German language skills, I bet). 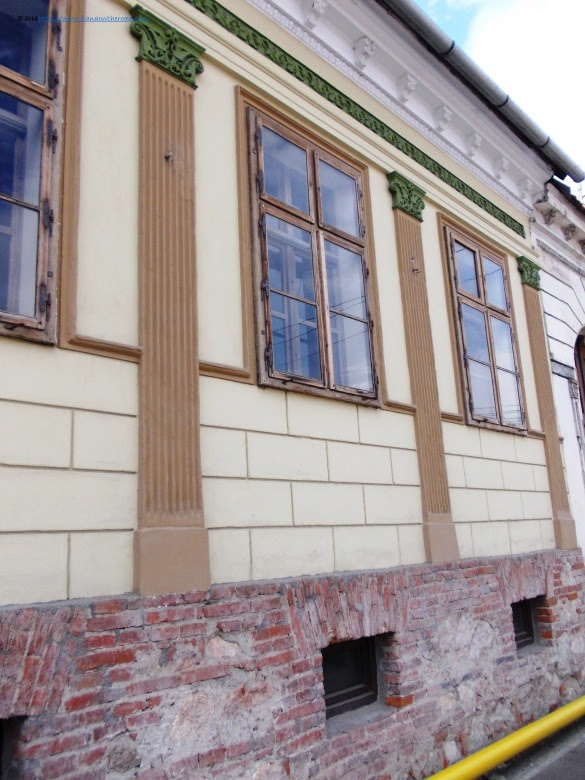 From a  political and architectural stage to the other, the houses can be read as an approximate history book. Some style mixture leads to completely unexpected results, when shapes of Greek columns, eventually coloured, are attached to old river stones and metal framed windows. 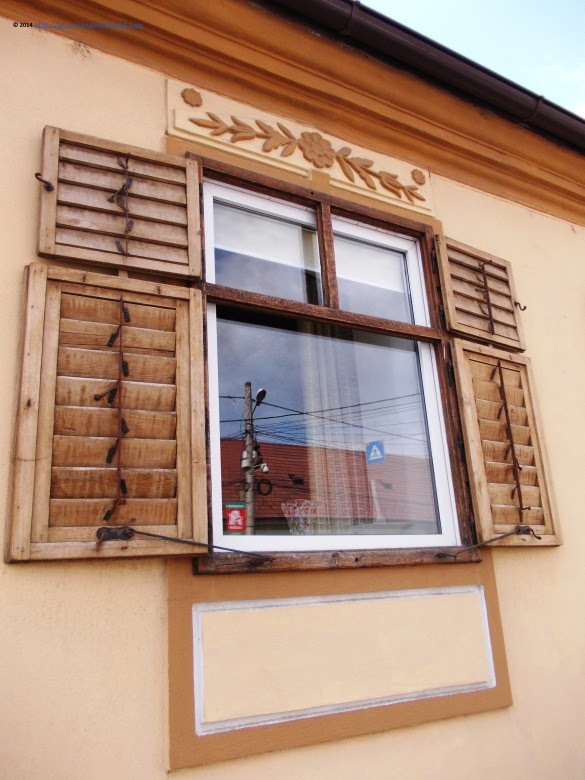 In the area near the city hall though, most houses were rebuilt keeping in mind the original 19th century local German architecture. Early in the morning, the windows are open and the careful investigation of the street life can start. Some Transylvanian houses do also have benches in the front of the houses where the old ladies can sit comfortably keeping an eye to all the social interactions and news. However, the street observation from the high of those windows looks more dignified and discrete, don't you think? 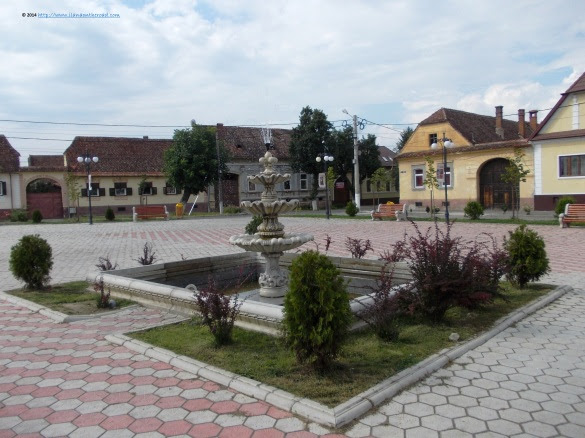 Caught between small streets and rows of houses, the square near the city hall looks like a perfect observation point too for understanding the secret life of Cristian. 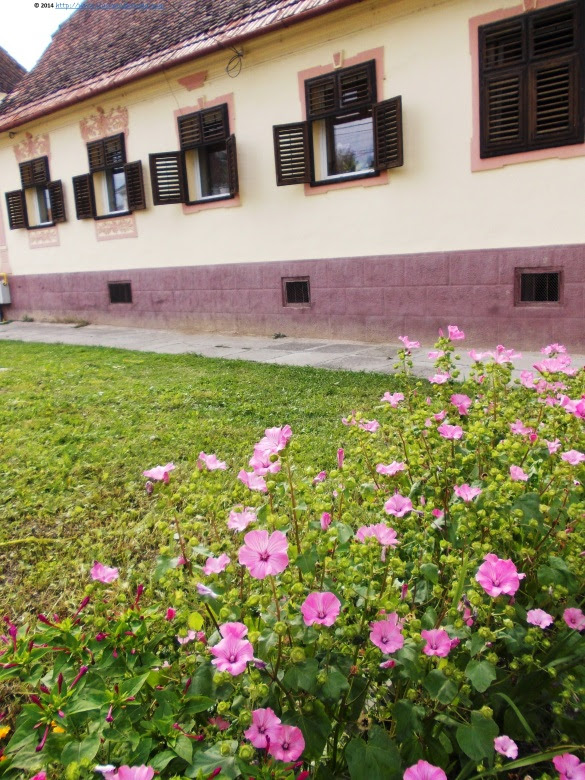 In the middle of the day, the open windows look like embracing the visitor while keeping you in the front of the gates. When the evening comes, everything is slowly closing and the center of life moves indoors. The life of the streets, except the speedy trucks and cars outside , is getting quieter too after 8-9 o'clock in the evening. There are a couple of small shops open - most of it is done in Brasov anyway - and a pizzeria with a late night program, but without a hotel or proper accommodation, most tourists have left already. Renting rooms by locals is possible though, especially if you want to experience a perfect retreat experience, with good local food and healthy sleep after long walks in the middle of the nature. 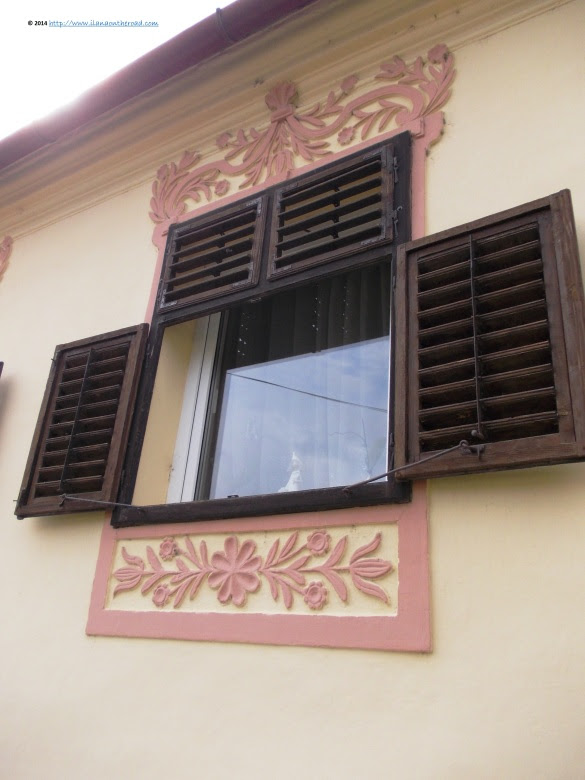 The longer you stay, the more intrigues one might be about the local stories of the houses. Asking the locals about can lead to an interesting conversation, but doesn't mean that you will get too many revelations about the secret histories. 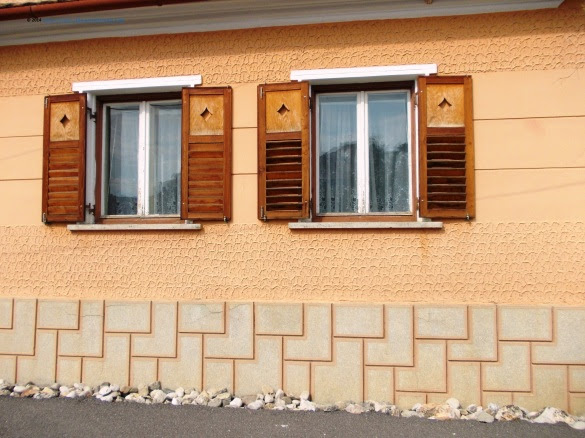 One afternoon, I spend my free time just walking the streets trying to catch on the camera the different styles of the houses and especially their windows. With local funds, most of them were introduced part of an open air exhibition offered to the visitors, but without too many details about their full history. 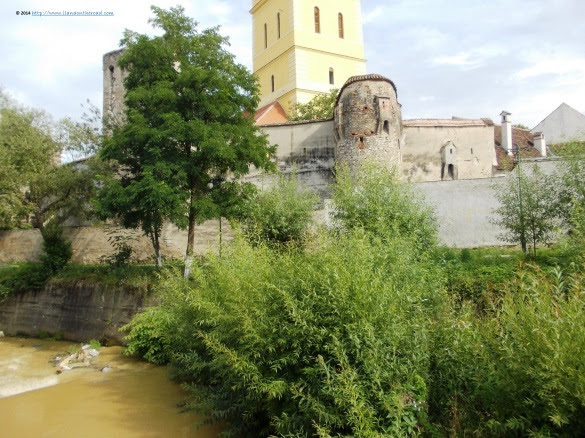 Near the city hall, there is also a small citadel, serving as a local protestant church, with some library resources. 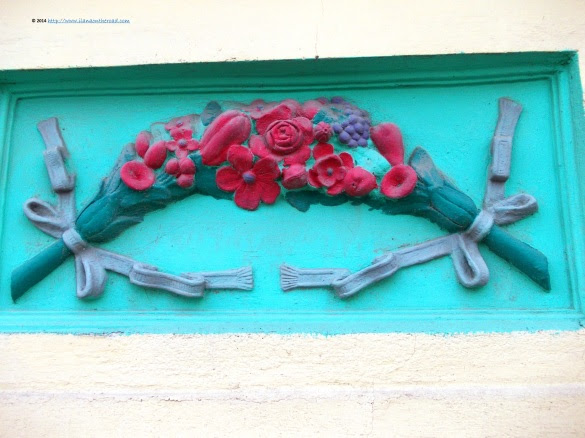 The choice of the new colours for repainting the houses or only some details of them is sometimes hilarious, and the explanation should be either mysterious - maybe some colour combination can bring luck to the new entrepreneurs that decided to buy a property here - or clearly economic - those neon paintings are probably the cheapest ones on the market. 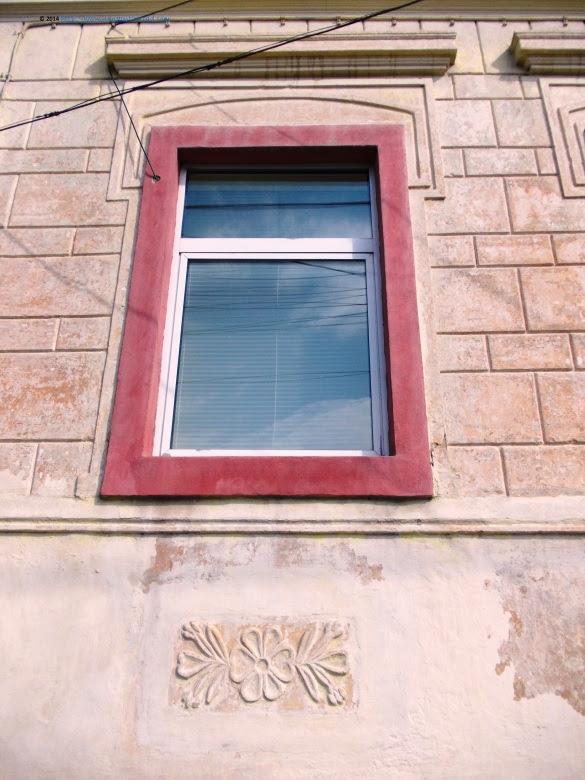 In most cases though the decent light pink shades were kept, with various decorations that are the trademark of the well kept houses in the Transylvanian villages. People living here are more careful to keep their face showing up well kept walls and entrances. 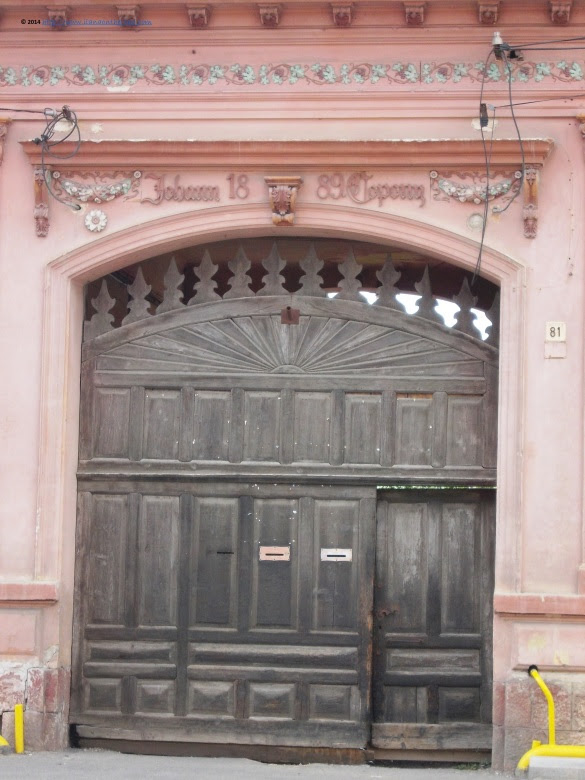 My short visit to Cristian was my last leg of my two-week trip to Romania - the longest stay in more than 5 years (more posts coming up this week as well). As usual, a mixture of more or less happy memories accompanies my stay there, but my visit to Cristian, after more than 20 years, reminded me of my inner child who will always keep asking lots of questions, ready to explore new territories and discover the mysterious stories hidden behind the wooden doors. As the houses are still reluctant to share their secret, I told to myself that maybe one day will spend more time listening more stories. Maybe a next time.
For more pictures from Cristian, have a look at the dedicated Pinterest board: http://www.pinterest.com/ilanaontheroad/cristian-romania/
Posted by Ilana WD at 10:59 PM