With a lot of love, from Prague 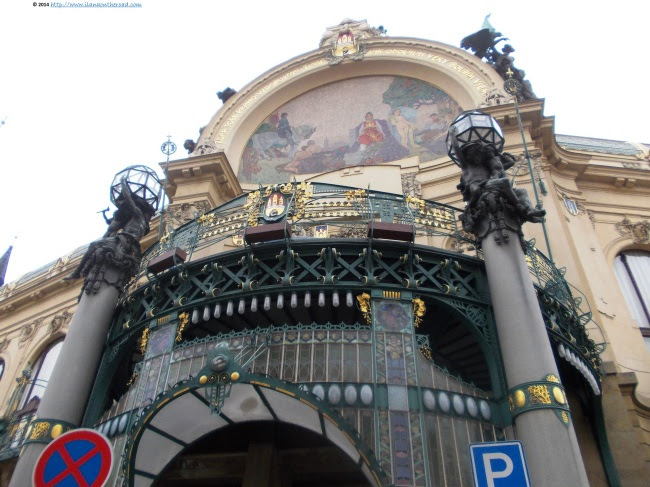 When I was introduced to Prague, ten years ago, I instantly fell in love with, not only because I had enough time to know it and the best accompanying Czech humour to understand it, but because is something in the air that inspires you to do it. Not surprisingly, ten years after, we are still in love. My only question to myself is why I did not visit the city more often, with only 4 hours away by car from Berlin?
When we arrived, on a Sunday afternoon, it was cold, but not cold enough to deter us from a long walk through the city. After checking-in our accommodation in a relatively communist looking area, we started the (re)discovery, first by an old looking tram, and for the next 5-6 hours, by foot.
We couldn't resist the curiosity to enter the imposing Opera, with the national composer Smetana a popular choice on the program, but also with a very elegant restaurant for exquisite music lovers. 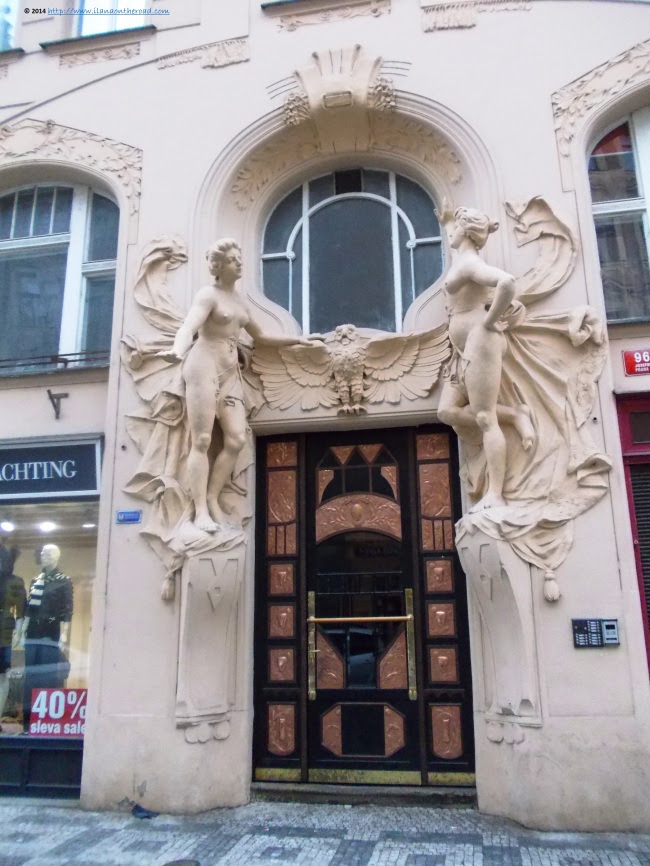 We continued without a plan on the streets from Nove Mesto, never having enough of the mythical architectural apparitions. 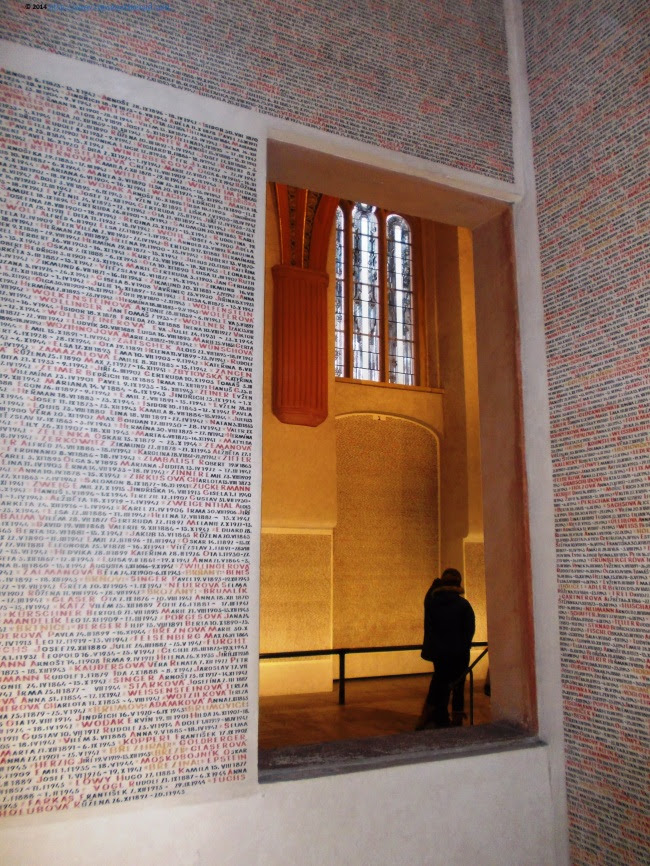 The next hours were wisely spent in the Jewish quarter, the former Josefov ghetto, learning more about what used to be once a very interesting and well learned community. Nowadays, most of the synagogues are museums that can be visited with a common ticket covering all the main buildings displaying the local history. At the Pinkas synagogue, the walls are covered with the names of the Jews from Moravia murdered during WWII. At the first floor, an impressive exhibition of drawings of former inmates, many of them children, from Theresienstadt, situated close from Prague. 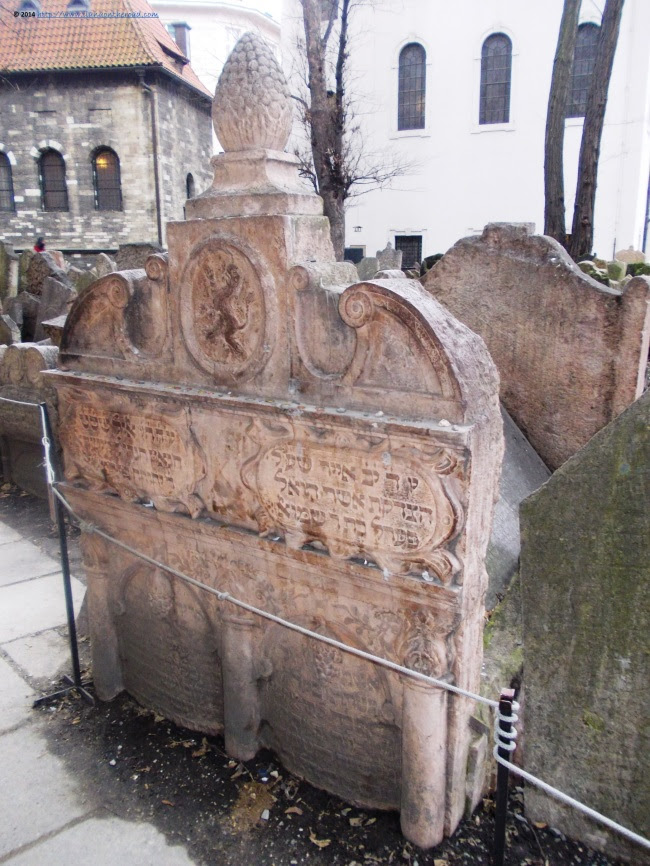 The last stop, before a rich lunch at the King Solomon Kosher Restaurant, the Jewish cemetery, where many European Jewish personalities rest, among them the famous Maharal of Prague and the poet and kabbalist Avidgor Kara. 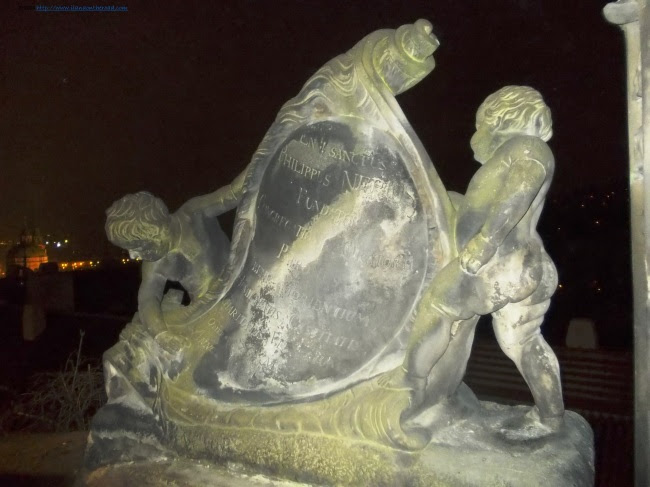 Trying to avoid the busy streets with tourists from all over the world, we walked our way to the castle looking for small corners, without too much light, but with beautiful buildings telling their stories. Not necessarily because in the middle of a sociopath crisis, but because such a city requests to be listen in silence from time to time. 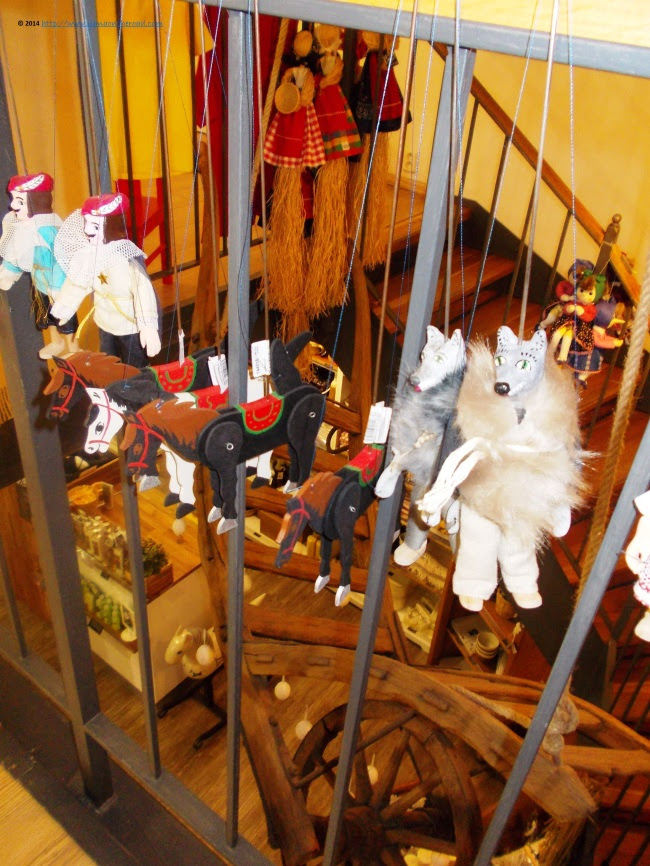 But it did not last too long, our vow of silence. On the way back in the center, we got back the mood for society, and even made some jokes with the guys disguised as huge plush whales inviting us for a Thai massage. Instead of an Asian adventure, we wanted to see more local authenticity and entered one of the many Manufaktura shops, with puppet toys and hand made wooden products or natural cosmetics. With the temperature dropping, we made another stop at the colourful Blue Praha. 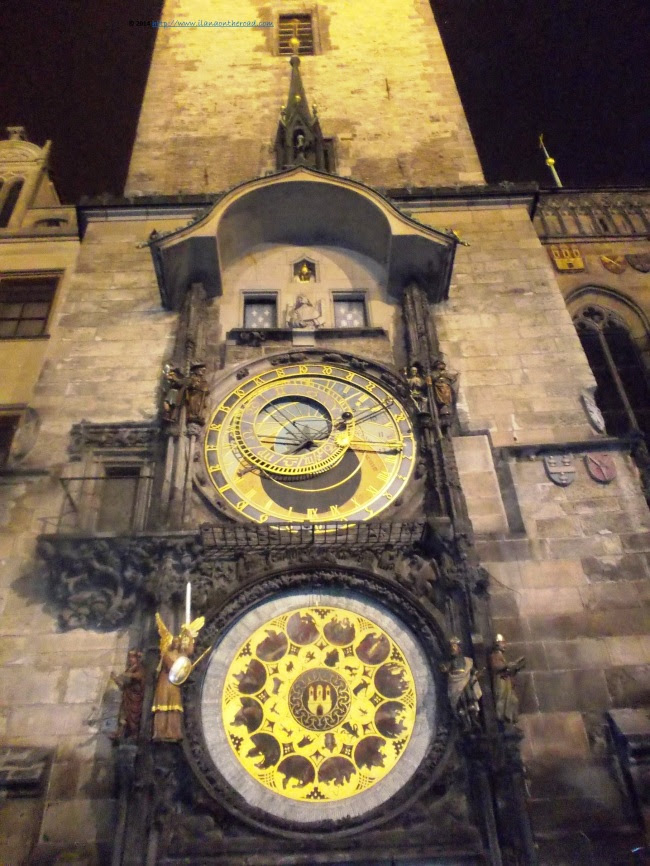 Some iconic places should not be avoided, but photographed with interest. The astronomical clock is a mystery in itself and the picture can be an inspiration for more stories later. I wanted to have my own story of a famous Pavlova cake, but the Golden Deer, our last stop for the day, offered me instead an Algerian coffee, eggnog and whipped cream. As usual, I am ready for surprises and decreed that the taste is wonderful. With the taste of novelty back, I feel a mixed message of the black-and-white cobblestones: encouraging me to go to a new trip while waiting for me soon. 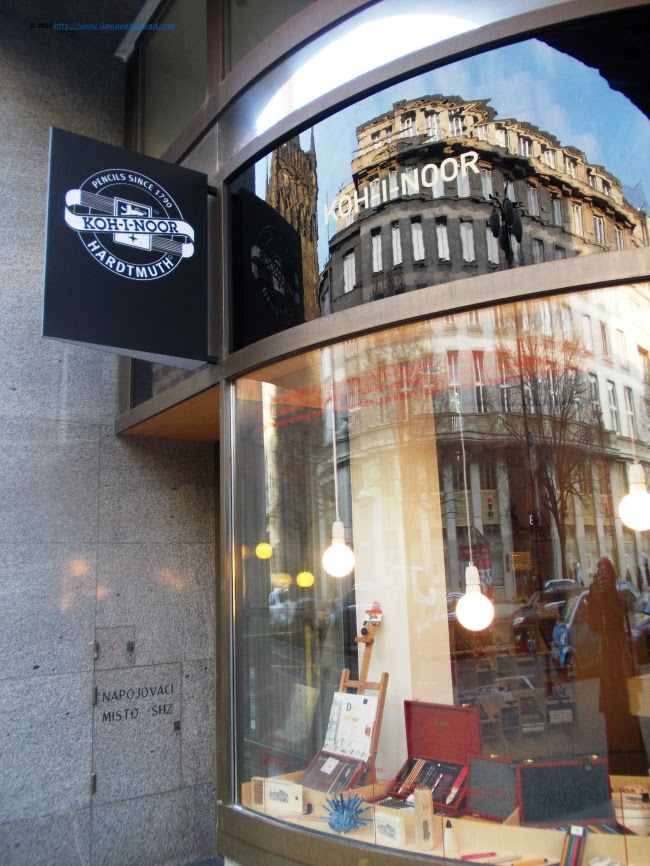 This time, I left Prague only for less than 24 hours, for a little travel adventure to Bratislava. The morning after, and the last in Prague for a while, we were early on the streets, practising my old time passion: discovering how a city is getting ready early in the morning. A very sunny Tuesday morning, this time.
In less than 30 minutes, we tried tram and metro, using the cheap tickets that can be bought usually from the yellow machines at the metro stations. The controls are quite frequent, as we noticed ourselves, so better respect the laws of the place.
From Namesti Republic square, we walked direction Wenceslas Square.
Paying respect to my childhood, I insisted to stop in the front of the Koh-I-Noor shop, explaining how much I loved this name at a time when I didn't know it's in fact the name of a rare diamond. At the time, there were the best pencils in the word I was ready to pay a fortune for. 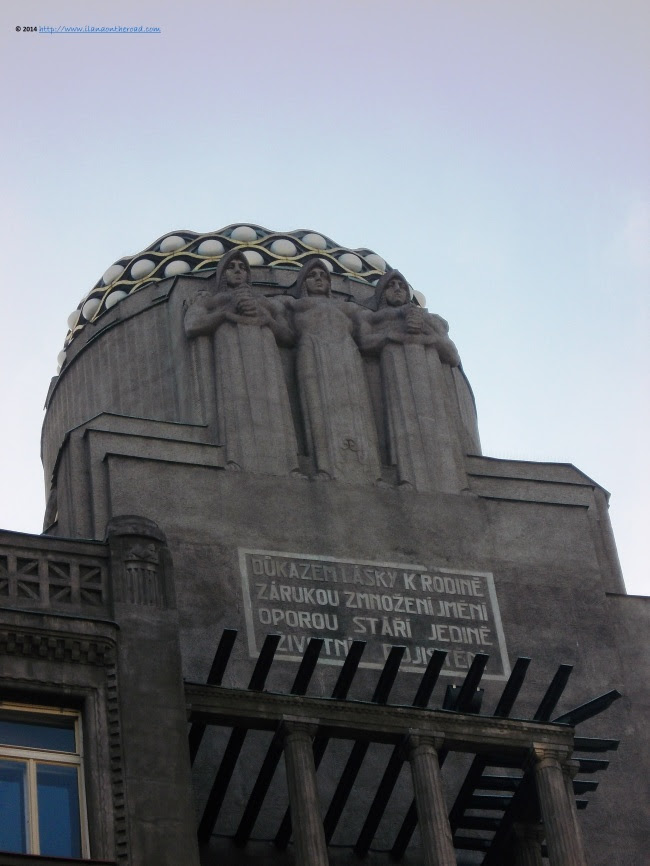 The architecture on the way to the famous square - synonymous with the anti-communist Prague Spring - deserves an extensive bibliography. When I was not taking pictures, I preferred to stop to the many bookstores on the way, many with rich English sections. 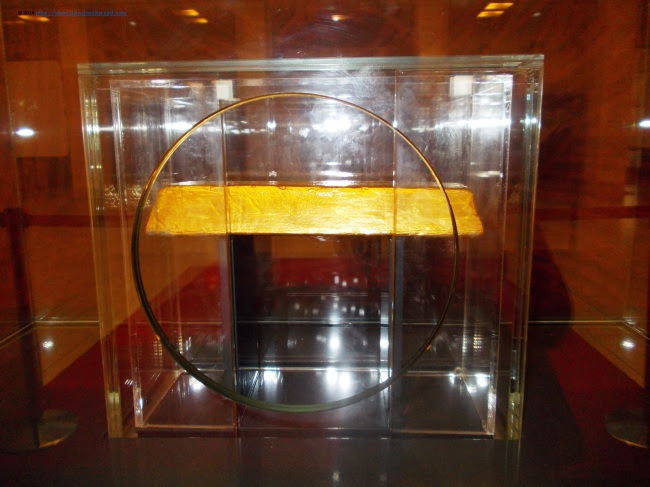 When you don't speak the language, walking only doesn't bring always too much insights about the places you visit. As usual, I was craving for some cultural and historical stories. After more than 24 hours without a museum, I decided to visit the Narodni Museum, for an exhibition about money, whose main attraction was a gold ingot that was touchable. Besides, a lot of interesting information about the sociological paths of money and various snapshots from the pre- and post-war local economical challenges. Another interesting exhibition was dedicated to 'scandals' featuring various media coverage of the rich repertoire of bribes and corruption local stories. No wonder that Karel Capek's wrote so interesting sci-fiction stories after years spent on the journalistic front. 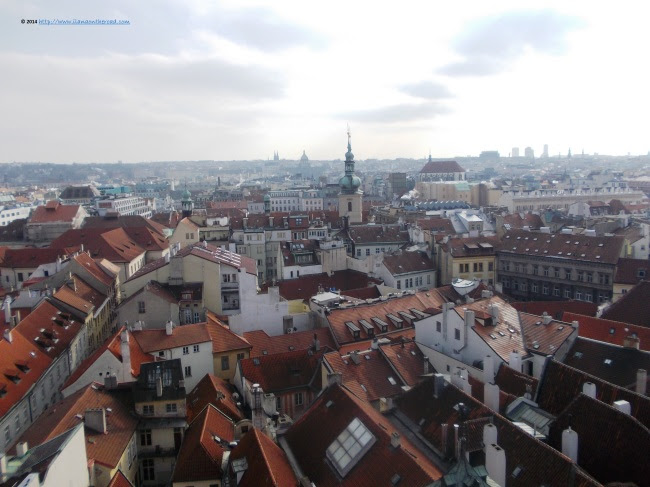 A visit to the Tower of Prague can be (mis)judged as a stereotypical tourist attraction and usually rejected with elitist despise. My excuse is that a panoramic view of the city explains a lot about how it developed and grew, shows it's histories and architectural development. Especially in the 19th century, Paris was a reference point, and even a small scale Eiffel Tower was built that can be seen and visited today, with a funicular. 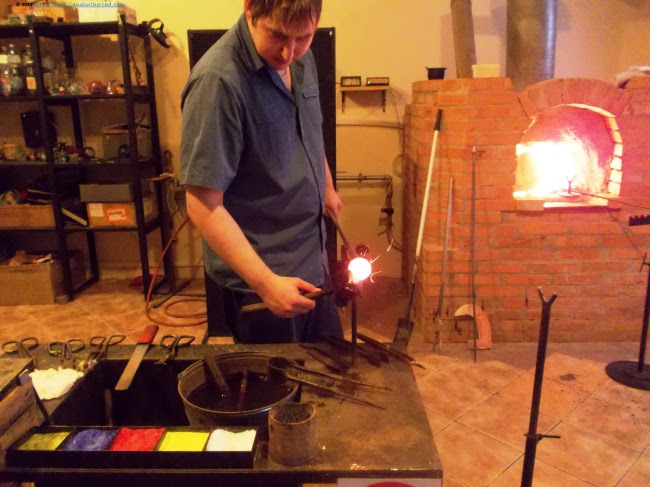 Back on the ground, I entered one of the many crystal and glass shops, another local branded product and instead of an exhibition that I was supposed to visit, I arrived in a glass workshop where I was explained how the small souvenir glass birds or cats are made. Fascinated, I watched how the glass was malleable enough to be shaped easily, but only if used the right seconds when it was still hot enough. 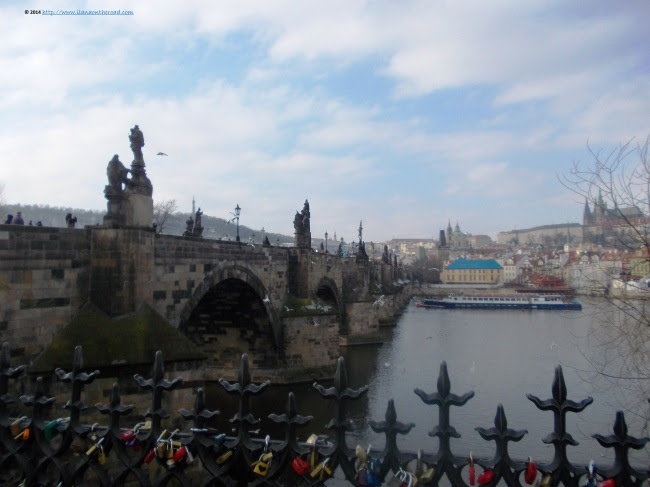 We returned on the Charles bridge, this time under the daylights. 10 years ago, in the early summer, the bridge was full of various presences, among them some orange dancing Hare Krishna, moving slowly in the sound of their tambourine among tourists and bouquinistes. The local artists were there now, with their unique pieces of jewellery or charcoal portraits, plus so many people franticly taking pictures. We rather prefer to have a stop and observe the small universe from a corner of the bridge. 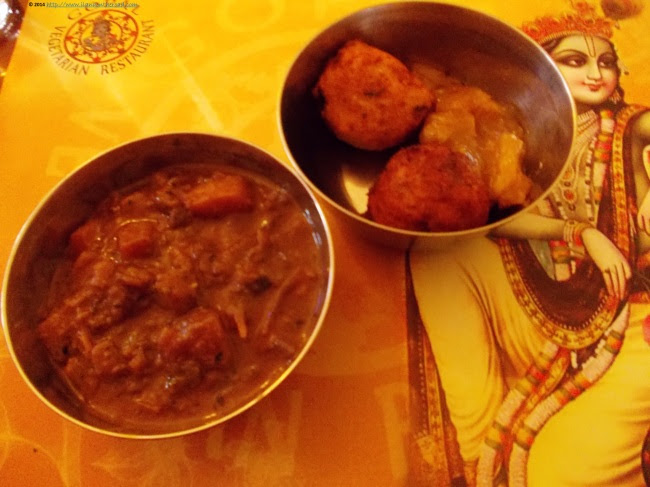 Lunch time is not always easy, especially when our time is limited. This time, I follow the opinion of the group and we stop at Gopal vegetarian restaurant. The sabjee - veggie ragout - and the pakora - very spicy balls are acceptable, cheap - as almost every meals here, offered for less than 20 euro for 3-course meals - but nothing special, despite a colourful and bohemian ambiance and a very fast service. 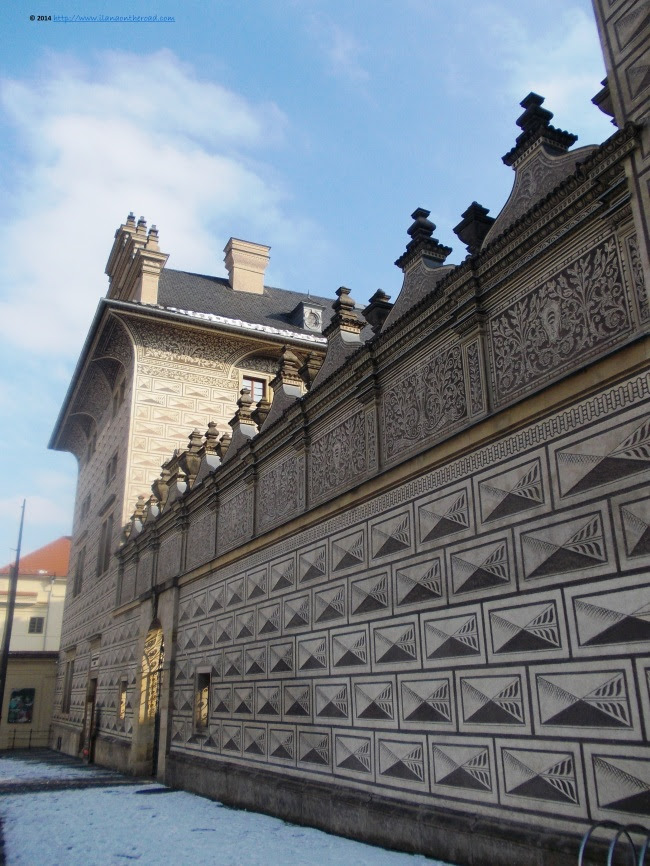 I am more hungry for culture, and two days ago we were too late for the exhibition at trompe l'oeil painted Schwarzenberger Palace. The history of baroque in the Czech lands introduce us to the world of local painters, many of them strongly influenced by the German, Italian or French colleagues, yet adapting their techniques to the richness of the local traditions and landscape. At the neighbouring Salm Palace, the first extensive exhibition since 1968 of Ludvik Kuba, who was not only an Impressionist landscape painter, but also a dedicated traveller and anthropologist. 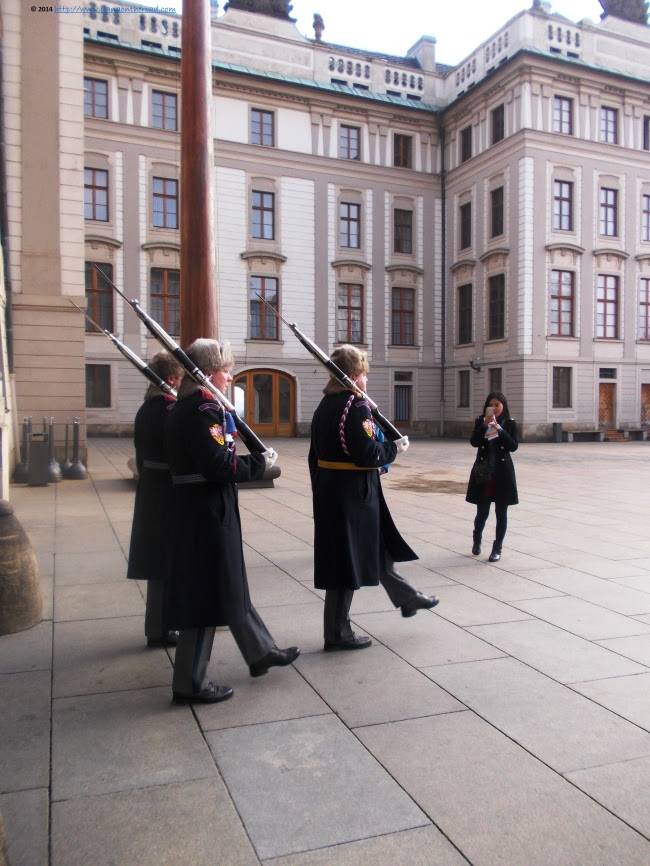 At the castle nearby, time for a change of the guards, not an easy task with so many tourists ready for at least a photographic memory of the event. 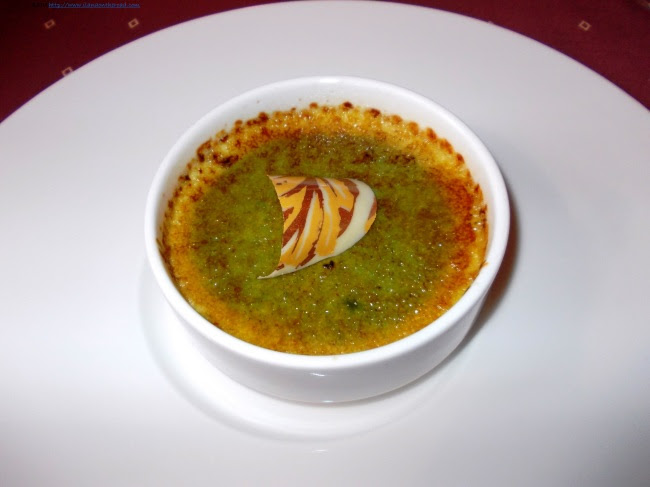 Since my trip to Luxembourg, two months ago, the crème brûlée - does it sound too brutal in English 'burnt cream' ? - is insidiously entering my usual travel menu. At the eclectic restaurant Pod Vezi, where I hear 'A wonderful world' at least the fifth time in the last 48 hours - I taste my pistachio variant. The crust was tasty, even delicious, but the cream a such a little bit too watery.
As I watch the time, we realize that it's about time to go close to the bus station for the sad 'return to Berlin' moment. On the corner of my notebook, I scribble where I should go the next time: Special Effects Museum - dedicated to the passionate movie making Czech history (think about Milos Forman, for instance) - and the Museum of Czech literature.
At the Gallery Zlata Libi I discover some well priced design works, a domain often presented as part of the local branding of the Czech republic in Germany. 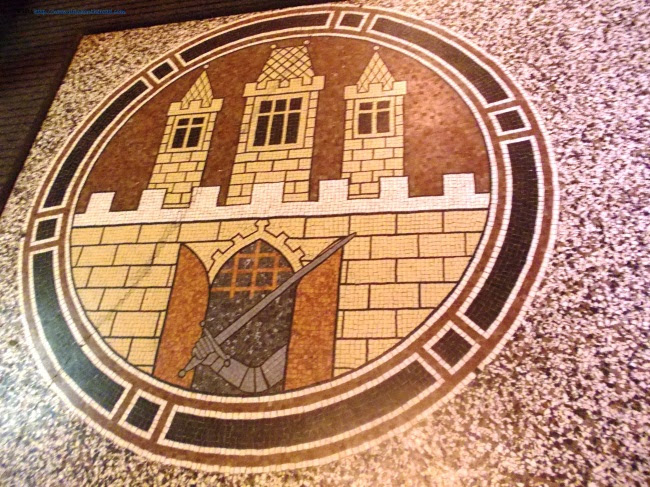 I don't like - 'hate', actually is the right tough word - to say 'good bye', and in our last 30 minutes in Prague and shortly before the closing time, I visit the Museum of the city of Prague, trying to learn more about my guest city. One of the historical observations is that 'Prague basin used to be a crossroad of trade routes and cultures'. It continues to be today, in the most charming way. It's a wonderful world, isn't it?
For more insights from Prague, check my dedicated Pinterest board: http://www.pinterest.com/ilanaontheroad/prague/
Posted by Ilana WD at 11:54 PM