The hidden jewels of Pforzheim 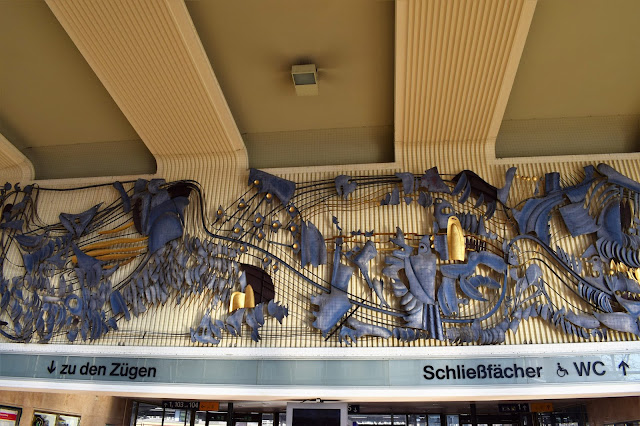 I wanted to visit Pforzheim for a couple of years already, soon after I had a couple of discussions with jewelery experts about the places in Germany where you can learn and discover local work. With 250 years of experience in the field of goldsmithing - to be celebrated this year - this city seemed to be the best destination for learning something new about German culture. Therefore, during my stay in Karlsruhe, just took a local train and in 20 minutes I reached my destination. The train station was decorated symbolically keeping up with the local traditions. 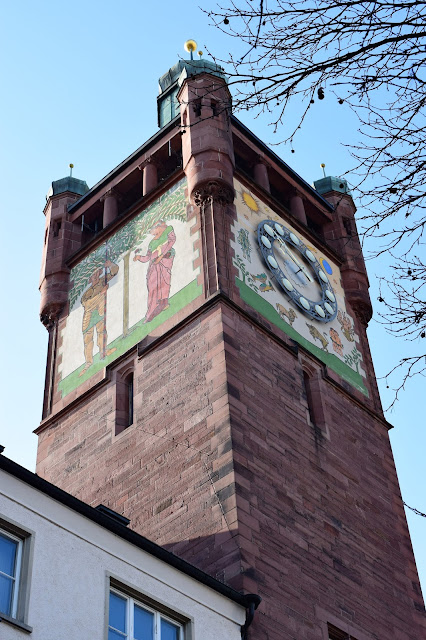 From the front of the train station, there are touristic spots aimed to show the directions to various interesting destinations. I decide to follow Bahnhofstrasse, where my first interesting spot is the cityhall tower, with the colourful images of Adam and Chava, just out of the paradise - hint: they are fully dressed. 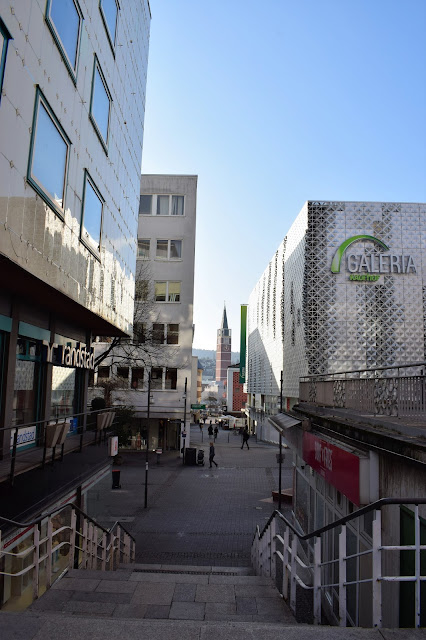 Besides this building, the architectural style is hard to impress me. As the city was fully destroyed by bombs on 23.02.1945, the reconstruction plans kept in mind the practical yet unappealing style of the 1960s. 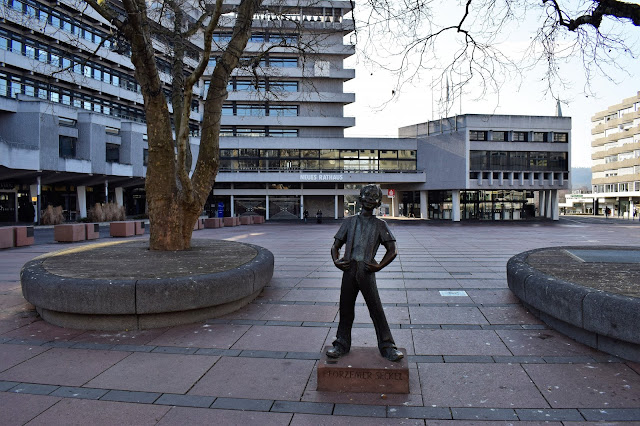 The utilitarist style of the box of matches is everywhere. Long rows of cubicles bordering the big streets or squares. Large scale billboards with images of the city after the dramatic bombings doesn't make justice to the city, as I couldn't see clearly how this city used to be. What I know for sure is that the locals might have a special sense of humour. The child statue of the Pforzheimer Seckel in the 23. Februar Square is an example of self-irony: In the local dialect, Seckel is another name for bag of gold, the names you can expect to be thrown to people living in a 'city of gold', after all. 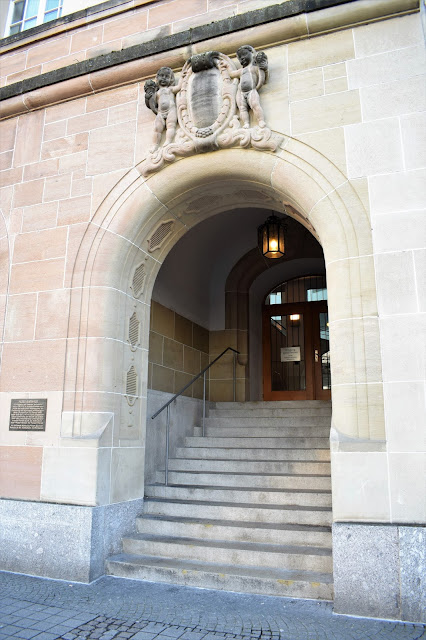 From the old city hall - Alte Rathaus - only one single arch from the original construction is left, built in a very well tempered Jugendstil, between 1911-1912. 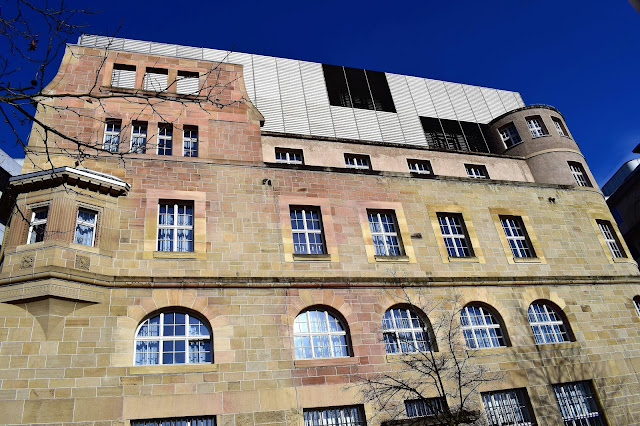 Interestingly, as in many places in Germany, fragments from the old constructions were successfully integrated into new architectural visions, in order to offer all the historical layers to survive under the same sky, 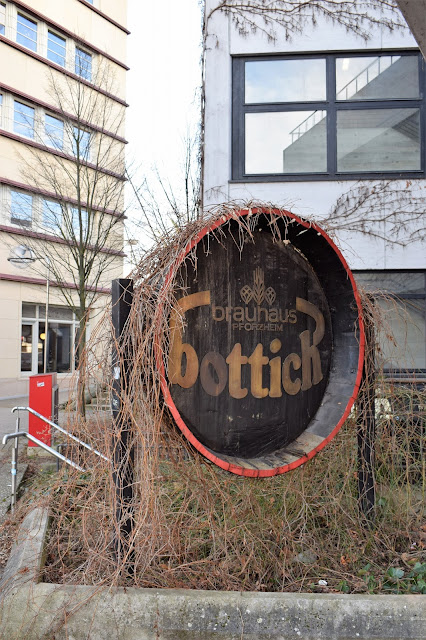 The foodie and gourmet scene in Pforzheim doesn't surprise me either. There are a couple of traditional breweries, bakeries - such as Stefanbäck - Asian restaurants  such as the Ananis Wok at the ground level of the Hotel Ruf or the attractive, hipster-like Mokka Express close to the central station and even an American dinner - Danny's. Enough to not starve during a short one-day trip from Karlsruhe or Stuttgart, the best main destinations from where one can travel to Pforzheim easily by train. Since 1988, Pforzheim also has its own first brewery, Hopfenschlingel, keeping up with the local German beer traditions. 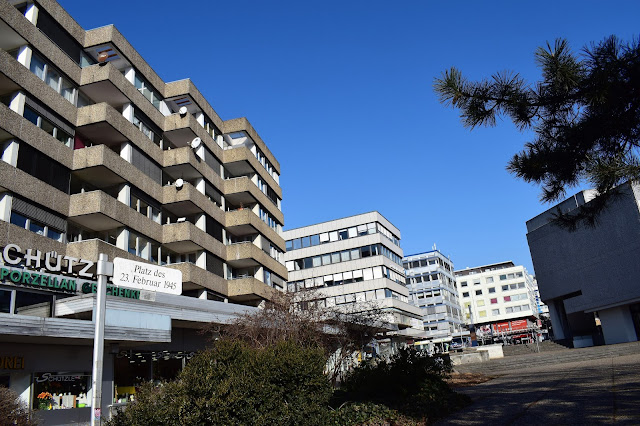 Sometimes, beauty is in the eye of the beholder and the more I am walking the streets the more used I am with the arid and repetitive architecture. 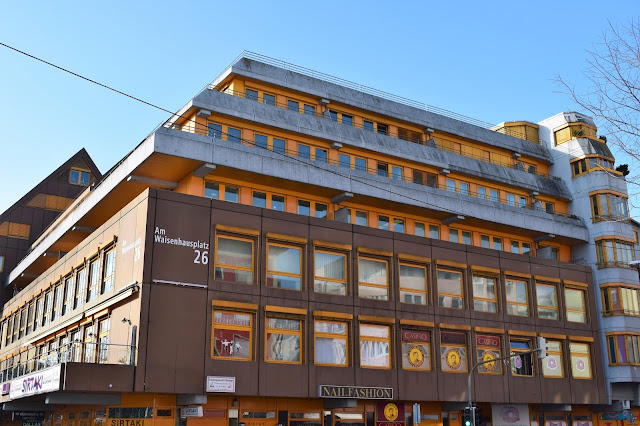 A yellowish submarine-like building on Am Weisenhausplatz 26 brings more colour and surprise to the landscape. Until 1945, Weisenhaus square was one of the three main squares of the city and was also completely rebuilt after the war. 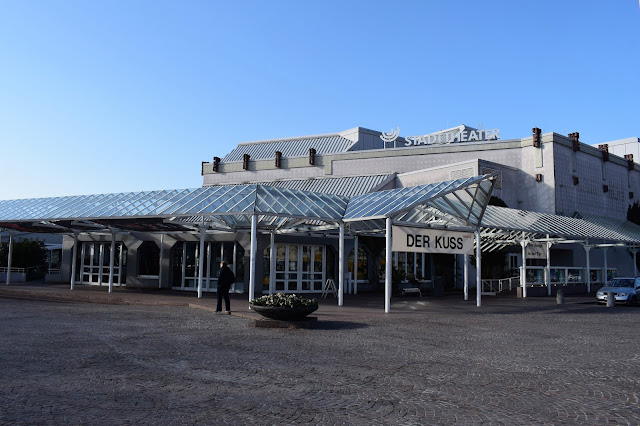 The city seems to have quite an intesive cultural life though. The local theatre - another whitish example of brutalist architecture - offers a rich repertoire of classical and modern plays. The city hosts various concerts but also a Poetry Slam as well as various lectures, many hosted also at the local library. 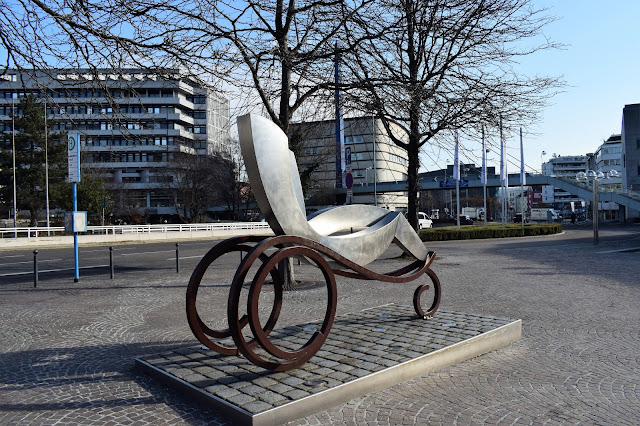 In the front of the theatre, a huge charriot-car like reminds the brave trip Bertha Benz made at the end of the 19th century, from her Mannheim residence to her place of birth, together with her two sons. Bertha, the wife of the inventor of the first automobile designed to produce its own power, Karl Benz, is the first person to drive an automobile on a long distance - over 100 km. This monument is part of an interesting local attraction in Baden-Württemberg - Bertha Benz Memorial Route - celebrating the world's first long distance road trip. 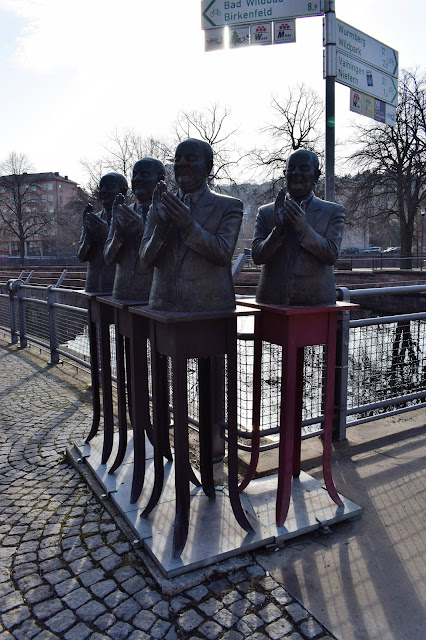 The statues spread all over the city bring a certain meditative air to its corners. Like, for instance, this work by the Argentine-born Guido Messi, a graduate of the goldschmitting classes at the local university, intitulated the Claque - une meditation over conformism. Sounds very actual, isn't it? 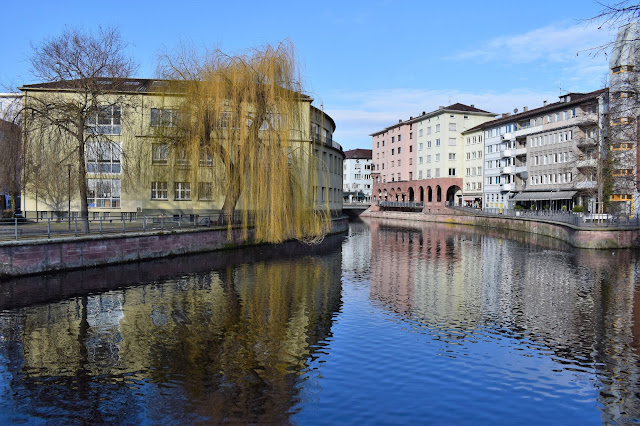 The early spring air embelishes the city and from the many bridges connecting the halves of the city I find some time for observing different perspectives and friendlier angles. 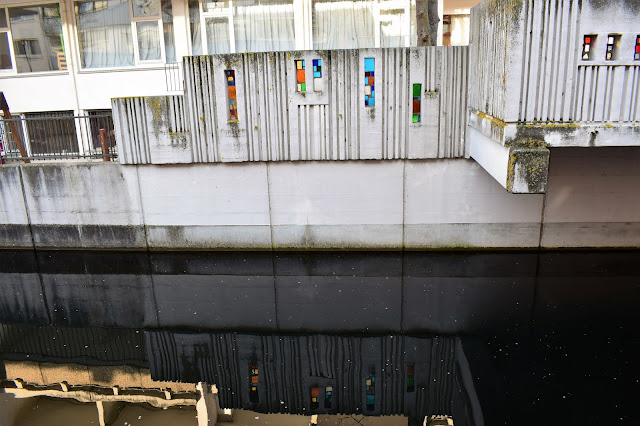 Although nowadays not so obvious as a couple of centuries ago, the tradition of precious metals workshops is maintained through small symbolic traces. For instance, on Neiderstrasse, colourful glass combinations inserted into the concrete walls which bring discrete colours and diversity to the streets. 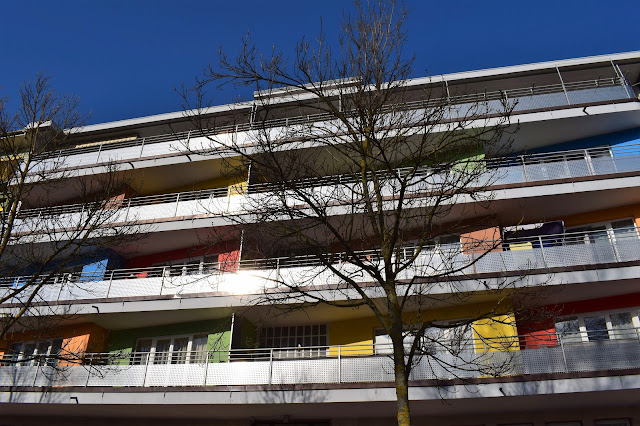 Some more splashes of colours reflecting the spring sun brings back the good spirits, and gives the chance of a dramatic and step-by-step change of the impressions about the city. 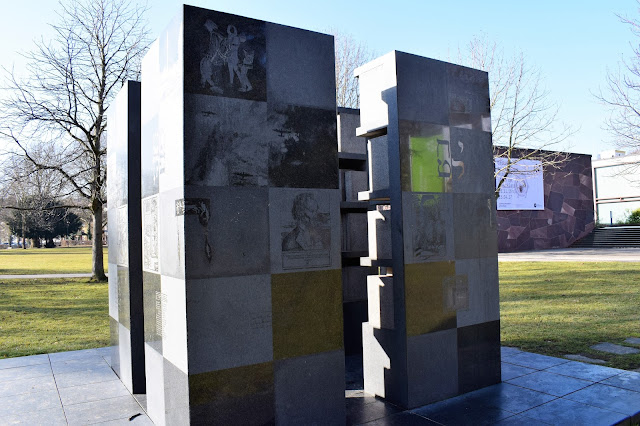 Pforzheim has many reasons to be proud of, besides the courageous Bertha Benz. For instance, the humanist Johannes Reuchlin, born here, whose memory is praised in a cube monument in the front of the Jewellery Museum, hiding in the interior shelves and book-shaped figures. Quotes from his works in Hebrew, Latin and German are spread over the stone area, 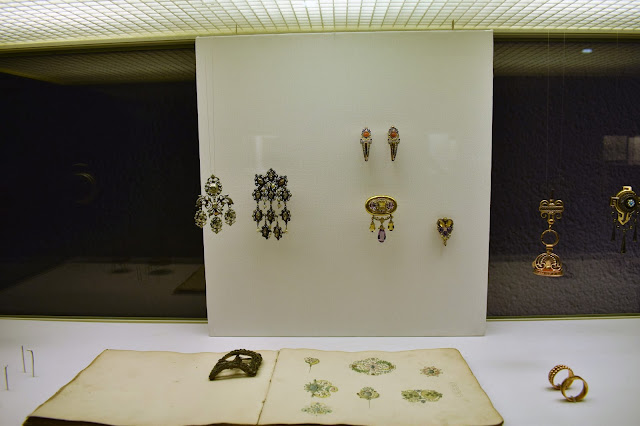 The next long leg of my trip is the Jewellery Museum, displaying centuries of fine work and artcraft that I extensively introduced in a special blog post. Unique pieces, most of them successfully resisting the test of time offer an overview of history and social habits. Every piece is the result of careful work and aim at perfection, through an execution that gives no chance to accident. The museum also has special sections aimed to interest the smaller visitors, as well as little ladders helping them to get closer to the beautiful items exposed.
Curious to see some artists at work, I am disappointed to find out that the only such chance is at the Technical Museum, which at the time of my visit was under reconstruction. My only chance would be to return a couple of months later, on the occasion of the 250 Jahre Pforzheim Goldstadt celebrations. 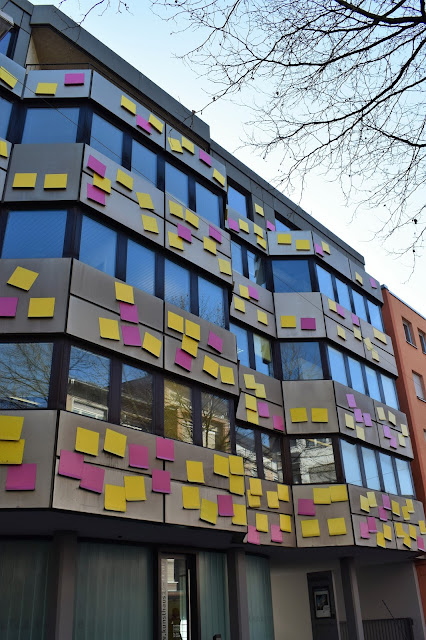 The Kunsthaus - House of Arts - was also at the time closed, but the post-it-like decorated building remains a spot of colour in the central city area. 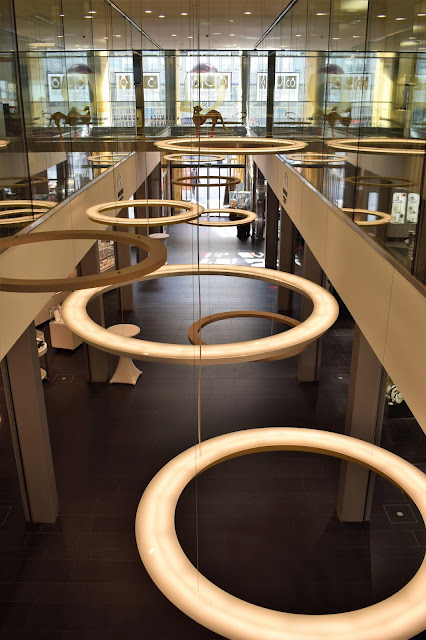 The next stop of the trip is at Leopoldplatz where one can visit the biggest shop fr watches and jewellery in Europe. The modern interior architecture is a combination of glittering lightning solutions and the need to create as much space as possible to accomodate various brands. Interestingly, there are many interesting local German brands of watches and jewellery on the market since the 19th century - when Pforzheim was the jewellery center of the world - to discover, plus you can have a look at the Sparkasse Gold Vault - everything was under control! On the way back, you can even grab a Champagne with fine slices of 22K gold inside, because you deserve it.
My trip to Pforzheim was less glittering than I expected, but with dedication and an open mind for discovery, I succeeded to get at least one of the best impressions and travel stories, at least as precious as diamonds.
Posted by Ilana WD at 5:56 AM