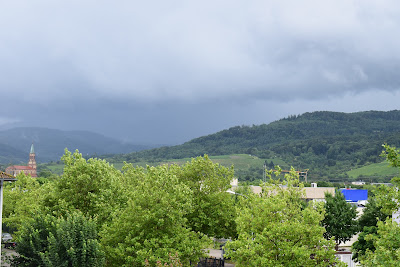 The grey skies are wrapping the mountains covered by forests into a mysterious mist. Short rain showers for a couple of minutes prevented us twice from getting out of the train station, when, after 7 hours of ride from Berlin all we wanted was to go out, freely move our feet for more than 10 minutes and have a deep breath of fresh air. This is how we spent our first from the 24 hours in Freiburg (im Breisgau), as I am back in Baden-Württemberg and its spectacular Black Forest (Schwarzwald). 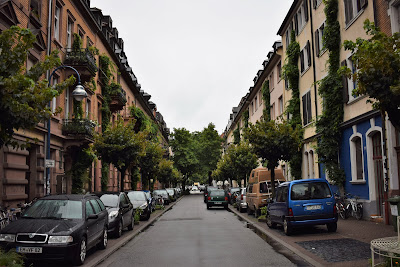 Freiburg - adding im Breisgau is meant to make the difference with the homonymous city from the neighbouring Switzerland - is considered Germany's warmest city, which still have to be proved for me, but obviously, its other famous brand, as one of the greenest cities in the country is demonstrated in multiple ways. From the solar panels at the central train station to the ecological public transportation or the green patches all over the city, as on the buildings of the Guntraumstraße, the eco-proof of the city can be noticed everywhere. 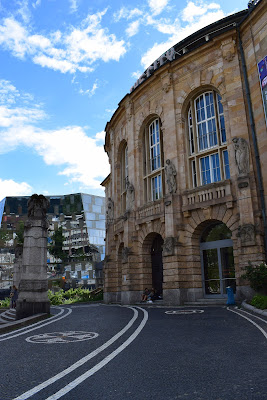 Happily, until we checked in at our hotel and got ready for the discovery of the city, the weather changed dramatically for the best. With a 24-hour transportation card - available for 6 EUR.- we can move fast, trying to see as much as possible within a short time. Walking slowly from the train station we arrive close to the historical center, starting our sightseeing with theroundly-shaped Stadttheater, the oldest and most prestigious theatre institution in Freiburg, with an alternative repertoire of classical and avantgarde plays, appealing to both young and more conservative audiences. The building in itself is a great example of Art Nouveau architecture. 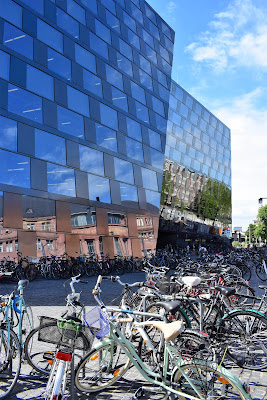 Nearby, the glass and chrome facade of the University Library is surrounded by a sea of bikes, is reflecting the old and new buildings in the neighbourhood. Albert Ludwig University is relatively young - compared to other European universities - being founded in 1457 during the Habsburg dinasty - but has an impressive palmares of former students, among which Hannah Arendt, Hans-Georg Gadamer, Edmund Husserl, Martin Heidegger or Rudolf Carnap. 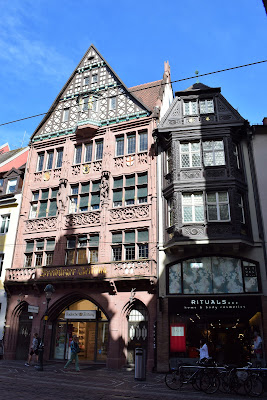 Slowly walking the old cobblestone streets, we are surrounded by colourful and spectacular looking houses, which remind me of the ambiance of small towns in Switzerland and France, both countries one hour by car or train from here. 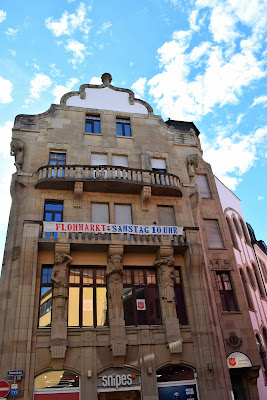 From Middle Ages facades to massive Art Nouveau decorations, there is a multitude of styles and influences displayed in the front of us. 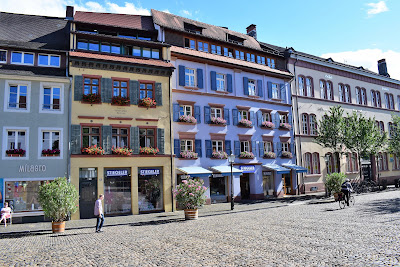 We stroll the small shops on Kaiser Josephstrasse, charmed by the colourful upper levels, with windows abundantly decorated by red flowers. 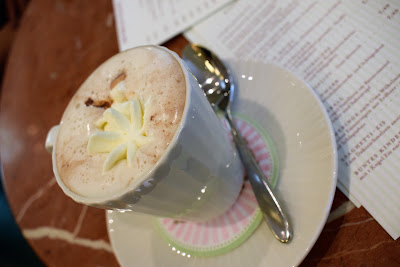 With my coffee time slightly overpassed, I am in one of those days when I can easily have a chocolat for dinner. The over 100 year old Confisserie Gmeiner won my heart with a hot chocolate, well sipped surrounded by small plastic bags with delicious looking little treats. 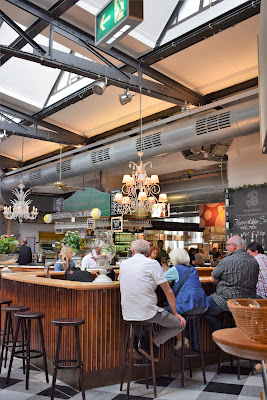 And this only opened the appetite for something even more serious. At a local recommendation, we are heading for the Markthalle, which compared to some similar food markets I've been to in Berlin looks not only elegant, and even has a champagne and wines bar, but also offers a wide range of cuisines from all over the world, from France and Italy to Middle East and Asia. 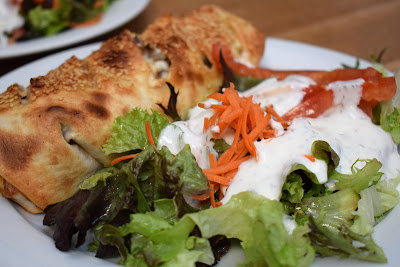 The Vegetarian dish at Rollo Arabico was exactly what I needed after so much time spent on the road: a crispy dough filled with various cooked vegetables, accompanied by fresh salad, tomatoes and carrots, covered by a garlic sauce. 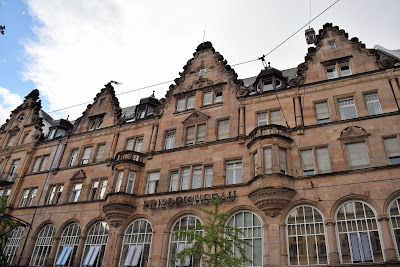 The weather next day is more friendly from the early morning, and after a short breakfast, we continue our short exploration of Freiburg. As for now, we continue the observation of the special architecture, richly decorated with facades mathematically divided into smaller and smaller surfaces surrounded by elegant stone carvings. 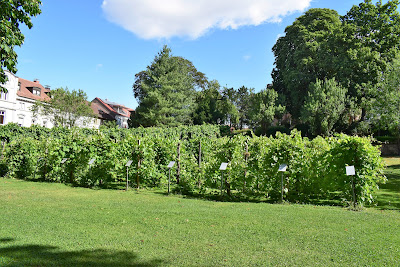 As being part of the over 12,000 hectares area of wine growing in this part of Germany, Freiburg proudly displays some vineyards samples just in the middle of the town, one of the many advantages of cultivating a green city brand. 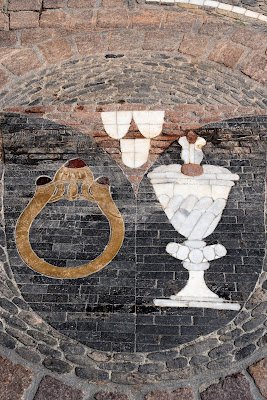 The small details do make Freiburg a special city. For instance, the carefully carved cobblestone designs in the front of the stores, aimed at giving an idea about what is on the other side of the door, only by images. Therefore, while there, you better watch carefully your steps. 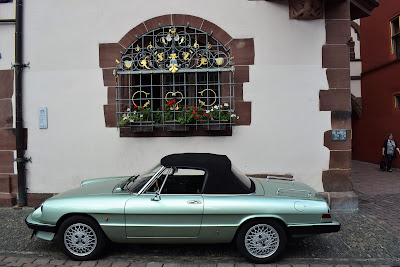 The power of details is overwhelming once you get closer to the Münsterplatz, which hosts the most impressive samples of traditional architecture in this part of Germany. 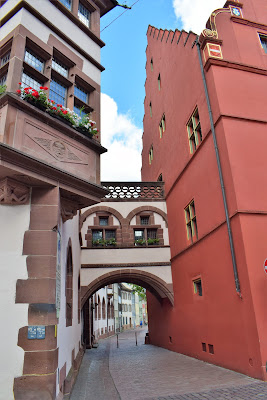 The older and newer architecture is easily integrated into the contemporary landscape. Bridges are connecting buildings and the colours bright your day. Freiburg was founded in the 12th century but most of his historical city was destroyed during the November 1944 bombings of the Royal Air Force during operation TigerFish. However, compared to other cities that went through the same episode, there are no ugly 1960s style of buildings, as the renovations took into account the original style and most of the historical constructions were brought back to life. 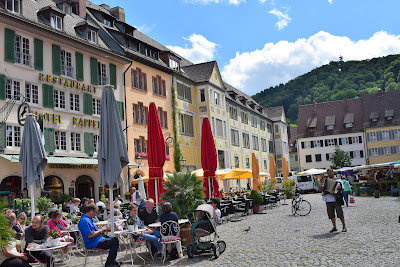 If happens to visit Freiburg on Friday, there is a huge open market taking place on the streets surrounding Münsterplatz, probably one of the biggest I ever visited in Germany, introducing mostly farmers' products and other regional goods. 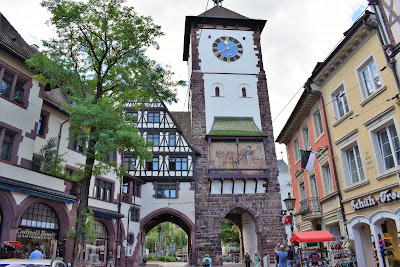 As our time to leave is getting closer, we take another short tour around the old streets, going through the towers' arches. 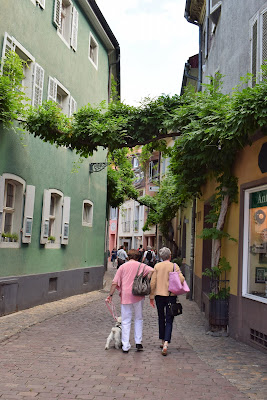 Our 24 Hours in Freiburg (im Breisgau) went faster than expected, and I know that the best of it is waiting for me for (at least) another, hopefully longer, visit.

Email ThisBlogThis!Share to TwitterShare to FacebookShare to Pinterest
Labels: 100 places to see in germany, 24 hours in freiburg, germany travel tips, schwarzwald, what to do in freiburg im breisgau, where to go germany