A Historical Walk in Karlshorst, Berlin

As a historian passionate about the Cold War period, Karlshorst was on my first 50 places list to visit during my first year in Berlin. At the time, I was breathing and eating Berlin history for breakfast, lunch and dinner and still wanted to know more and more, as a hungry student so passionate about the new information and yet dedicated to come back and revisit the previous notes.
After a while, I calmed down and tried to live also - and eat normal food too - acquired different routines and set up different priorities. I started to read more in German by German authors and make my own opinions, eventually ending up revisiting some places and even correcting the initial impressions. Karlshorst returned to my intellectual radar after reading some memories from the after-WWII times in this part of Berlin by author Barbara Honigmann who grew up in this area and shared her stories from the time of the first years of the Soviet presence.
A couple of weeks ago, loaded with some fresh enthusiasm, my notebook and my camera, I returned ready to revisit old places and eventually discover new ones. 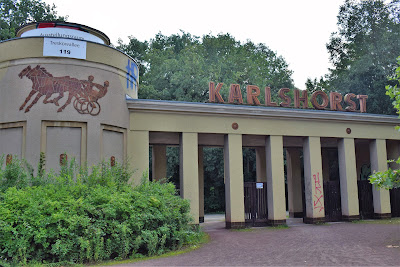 Karlshorst is situated close to both Köpenick and Lichtenberg, and a couple of stations away from the Tierpark. My journey started on Treskowallee, the most important artery in the area, around which in the 19th century, Karlshorst developed. Around 50 buildings on this street are classified as historical monuments. Part of the former communist Berlin and situated in the close vicinity of the Soviet headquarters, on this street used to be located during the Cold War embassies of 'friendly' states such as Popular's Republic of China or Libya.
At no. 119, there is the entrance to the horseback riding arena, covering an enormous park. 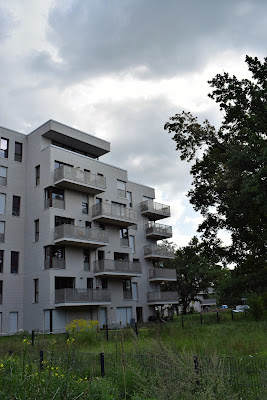 With the capitalist order winning - regardless what naysayers say, communist never won - the green area is little by little diminishing in favor of new modern blocks of buildings. Compared to Lichtenberg, for instance, you will not find here many Plattenbauten, with small one-storey houses being the most frequent architectural presence. Which is not bad at all. 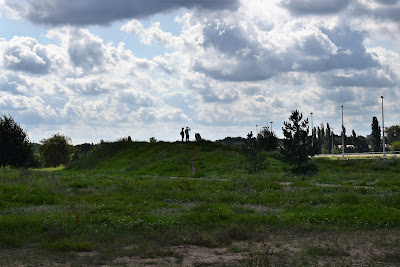 As for now, the green park is mostly untouched by the construction fever and remain predominant. As it is early Sunday, on the way exploring the area, we crossed path with  many local people spending time here, either walking their dogs, jogging, or just walking around breathing deep the fresh air of the summer. 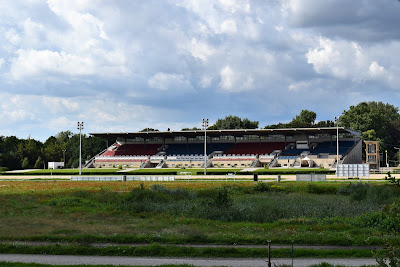 The horseback riding arena was quiet for another couple of days, until the 23rd of August, when a competition was held here in the morning. 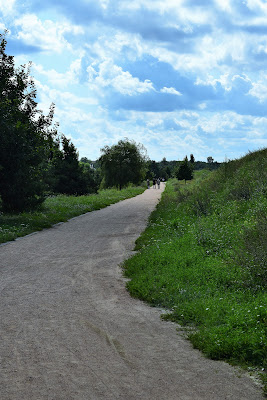 For most of the time though, the park is mostly quiet and the human presence remains very discrete, which makes even more enjoyable the nature walking. 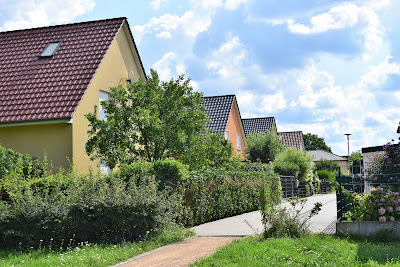 At the end of some wild alleys, small villas tucked behind green yards and flowers are trying to be as non-intrusive as possible. 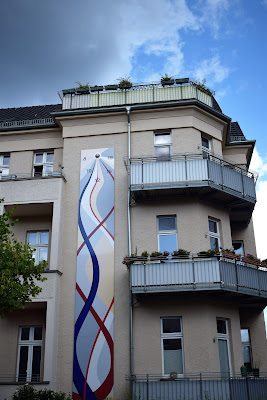 The usual Sunday silence continues on the main streets as well. We are back to the S-Bahn station where all the food and fun locations seems to be concentrated, such as a Kulturhaus and a music bar, but as for now, they are deserted. Our next destination is at the end of the Rheinsteinstraße - with average rows of buildings, freshned up by some colours in the walls once in a while - following the arrow indicating in Russian and Latin lettering: Museum Berlin Karlshorst. 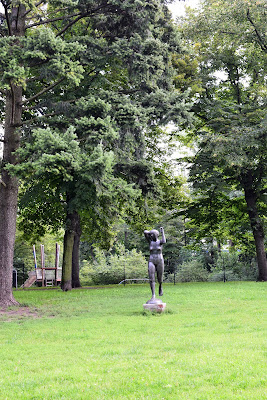 Before entering the labyrinth of history, another green stop, at Rheinsteinpark, with its huge alleys and equally enormous playgrounds, completely empty too. 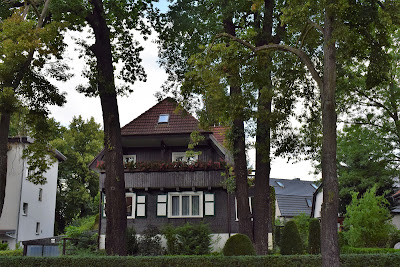 On our way, the architectural views are changing, with more Western - Swiss-chalet - looking houses challenging the average greyness. 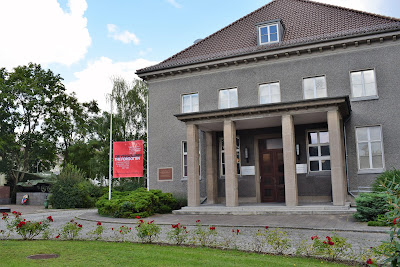 The museum is at the very end of the street, a former casino for military personnel, with Soviet armored vehicles stationed in the yard. The institution was established in 1995, being supported financially by both the Russian Federation and Germany. 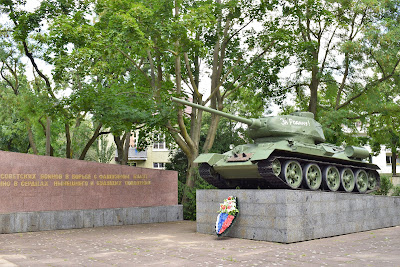 One of the tanks, a 32-tone made in the USSR with 5 places, with a freshly wreath in the colours of the national flags of the Russian Federation, has written in Cyrillic alphabet: 'Za Rodina' - 'For the country'. The journey back in time starts fast-forward. 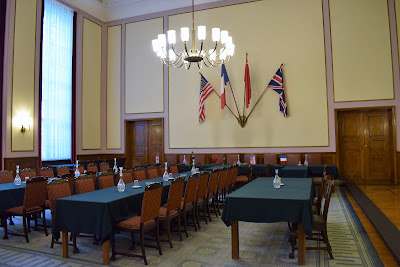 In this building, the surrender of Nazi Germany was signed in the night of 8 to 9 May 1945, after one week of fierce fights on the streets of Berlin. The Potsdam Conference which took place in the same year between 17 of July and 2nd of August, at Cecilienhof Palace recognized the status quo and set up the technical details of the beginning of the Cold War, including the famous bi-polar separation of Europe based on 'spheres of influence'.
The conference room in Karlshorst was reconstructed, the empty space being brought back to life through the black-and-white movie playing on some screens on the upper right side of the room.
The information in the museum is displayed in the small details, in German and Russian with a short explanation in English, including testimonies of oral history and propaganda images. One of the few things I acknowledged during my history studies is that there is no absolute historical truth, but different versions of the event, and what prevails usually is the crossing of different sources. Whatever your scientific angle or just curiosity, the museum is informative and reflects predominant conceptions specific for the Cold War historiography. 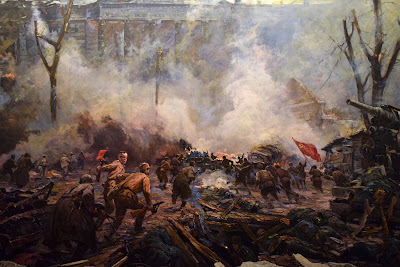 As I was already familiar with the information from the previous visit, my focus this time was on visual representations. For instance, the 'Diorama attack on the Reichstag', produced in 1967 by Grikov Studio in Moscow, which has a sounding of armed fight background, reproduced thereafter on many visual rendition of this historical episode all over Russia and the communist world. 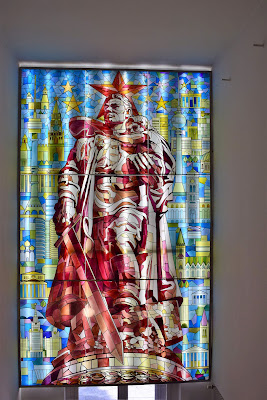 There is also a stained glass reproduction of the monumental statue from Treptower Park, representing a Soviet soldier rescueing a German child, based apparently on an episode taking place during the battle of Berlin. Symbolically, it is aimed to outline the friendship between Soviet Russia and the Communist Germany. In most such representations I've seen, the Soviet human always looks taller or bigger or anyway with clear superior physical treats compared with the non-Soviet presence. 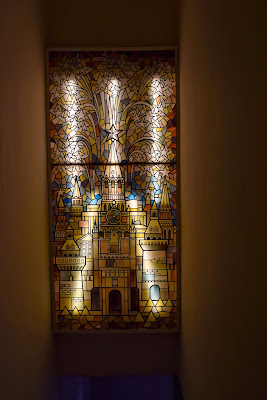 More joyous is another stained glass representing the fireworks of victory, with a two-dimensional building of Kremlin. 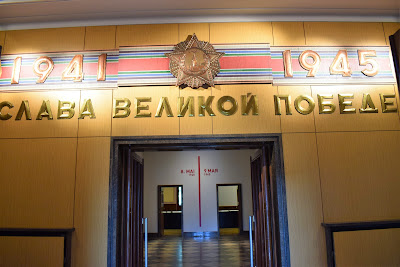 I left the museum after more than one hour of historical exploration and additional food for thought about a period I am familiar with for many - including personal - reasons. 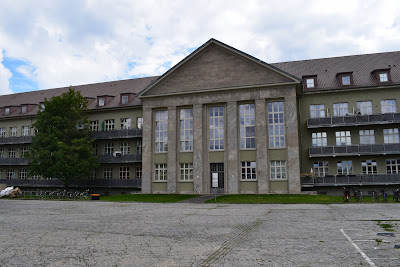 Before leaving Karlshorst I don't know for how long, my experience told me that there might be something left to see. As the building of the museum was until 1963 part of the headquarters of the Soviet Military Administration of Germany (SMAD) and the streets around used to be blocked for security reason, a couple of meters away I've found the larger compound.
At no. 4 Zwieselerstraße the former abandoned building after the last Soviet soldier left Germany - officially - a former military German school at the beginning of the 20th century occupied after 1945 by Moscow officials, including KGB and GRU representatives, is since 2012 a family-friendy block of buildings. It also was a bunker there, among many other facilites, but once abandoned it used to be for a long time one of the many abandoned places in the city, an attractions for many - me included. However, the pressure of real life of offering more leaving facilities for the nowadays Berliners, took over and the construction was adapted accordingly. The past is lost for good, save for a small note near what used once to be a high security entrance. This is how history goes.
Posted by Ilana WD at 12:38 AM