If you are looking for a drink to grab and some snacks to come along in Ireland, you have the Irish pub, in the Spain, the tapas bar and in Japan you have izakaya, or the sake shops. Identified by the red lampions in the front of the entrance, there are places where the customers have some glasses of sake accompanied by some snacks to make the time go faster.
In Berlin, as far as I know there is only one such Japanese foodie destination: Hashi, in Rosenthaler Platz, which I visited a couple of weeks ago. 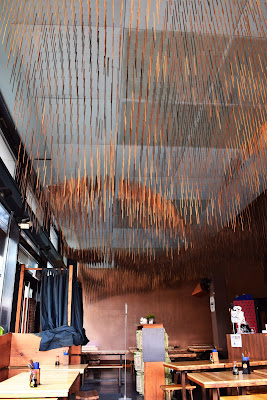 The interior looks very casual, with a touch of creative design: the small chopstick-like pieces of wood hanging from the ceiling. Japanese newspapers are glued on the walls leading to the toilets, creating a kind of local experience.
It is a good place to come with friends and extended family, and they do have a very sophisticated Stokke children seat, which is my first in Berlin and Germany in my 2 years of baby life. During the summer, there is a huge outdoor space from where you can watch the hipster humans walking in this part of the city.
The service is friendly too, an element which gives me always a good reason to return. My only problem was the hard-rock music from the background, which was a bit loud for my taste, although I used to hear such music at least once in a while. I was just not in the mood for noise, what can I do?
Card payments are possible - which I insist to remind to people not living in Berlin is not necessarily the case everywhere.
The prices are moderate but the meals deserve every single cent, as I would try to explain further. 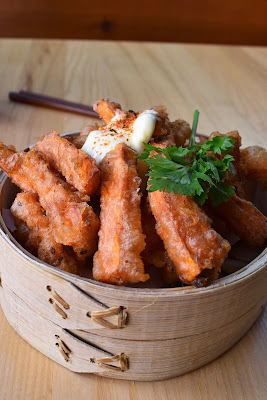 Although I lived in Japan for one full year, coming along with sake wasn't one of my achievements, therefore, during my visit I haven't tried the drink which made izakaya famous, prefering instead some decadent American classic soft drink. Not even tried a cocktail, one of them being very tempting, at least in name - Wasabi mule, anyone? - or the classical Asahi beer.
I have more to say though about what I actually did: eating. The yams fries were the best surprise ever. Deeply fried in oil and covered in the typical tempura batter, they were the best combination between the sweet taste of yam and the basic taste of tempura. The mayo added on the top balanced further the sweet taste. 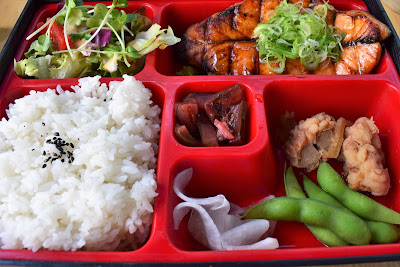 With a taste of regret that the fries are over, I continued with the 'main' meal: a bento box whose main character was a salmon soaked in teriyaki sweet sauce, served warm. The gluey rice topped with black sesame reduced the sweetness. The fresh salad was the healtiest in the box, a combination of tomatoes, rocket and some lettuce. In the middle, typical Japanese pickles which I am not so fond of because I do not like pickles in general. The portions were big, simple in taste, but once combined, offering a delicious memory without making you feel full like a rhinoceros.
The conclusion of a glorious Japanese meal: altough I haven't tried any sake, I had the pleasure of discovering a couple of new tastes and combinations and would accept an invitation to come back any time, eventually ordering the same meals. Because good foodie memories always need to be nurtured.