Colours and shapes of Hameln 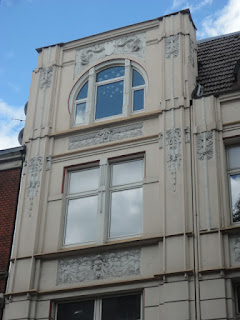 I have different reasons to embark on a new journey, all of them legitimate when it comes to travel, of course. For Hameln, the motivation was to finally visit the city where the legend of Pied Piper of Hameln originated. It is said that around 1200, when the city of Hameln was fighting a rat invasionn, a piper in colourful clothes was hired to sing around the streets and take the rats away of the place. His success and the following requests for raising the pay were not honoured by the city council and as a revenge, he used his musical persuasion to lure away the kids, brought them to a hill and, according to various variants, either drown them to Weser river or brought them back after the payment was made. The story appears in various apocryphal accounts, but also in Brothers Grimm stories or by Goethe. Although the account received extended interpretations, including the one I am mostly in favour of, that the story might be an allegory of death, in the style of Danse macabre versions popular in Europe at the time, the city branding relies at a great extent on the legend.
For me, from the first moment I started my journey until I left, the beautiful colours and shapes of the city architecture, took my heart. Maybe this is the side effect of Piper's colourful clothes. 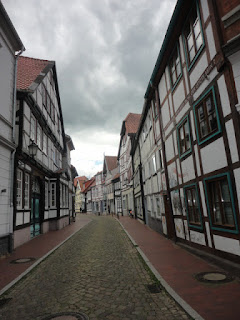 First, I entered a fairy tales world of timbered houses, that made me think about my previous travels in Celle and Harz area. (Actually, if I count my time in Germany in trips, I may have been here long before being born, it seems.) 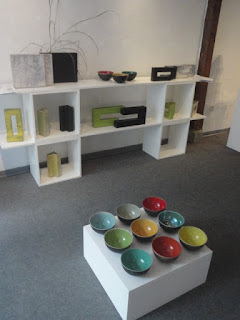 Besides living places, these houses also host cute little stores or even bank offices. On Alte Markstrasse, I discovered the Galerie Keramik, displaying colourful glass work. It was a good  match for the landscape. 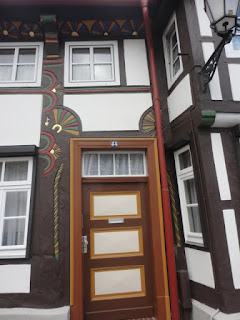 Compared to other similar architectural styles I've encountered, in Hameln, the colourful details are more elaborated and creative, with door posts area richly filled with various combinations of colours and shapes. 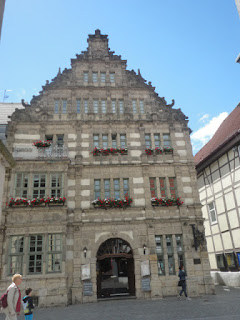 Hameln is famous for the architecture lovers for its specific style: The Weser architecture, dating from the 16-17th Renaissance period. It is considered a variation of the Italian architecture, but more decorated, with subdivided facades, rich sculptures and big windows. 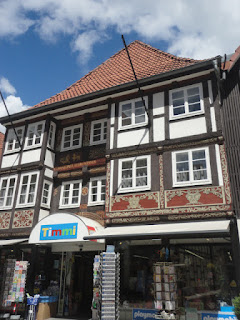 The very busy Osterstrasse, with both tourists and locals, samples the entire diversity of the styles and the various historical layers. Besides shops and restaurants, it also has an important number of small museums, such as the local city one. 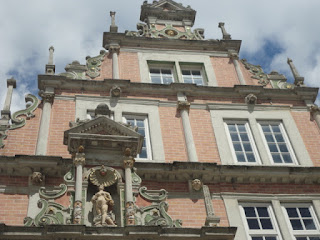 This pinky building, with its numerous sculptures and well-tempered chaotic geometrical facades and decorations is my favourite in this city, or maybe in the entire Germany. Somehow, it reminds me of a Baroque concert. 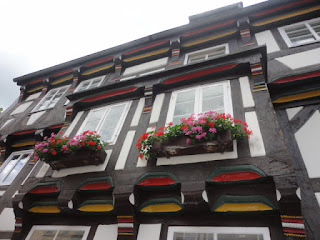 Music suits a lot this city, and all round the summer, open concerts are taking place in the open markets near Rattenkrug. 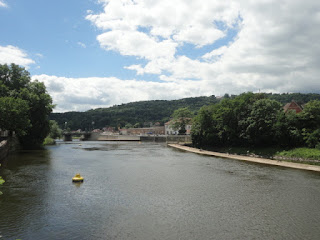 Although I do not have too much time for adventure, I choose to take one small street, Fischporterstrasse, at the end of which there is the river Waser bordered by small hills covered by forests. 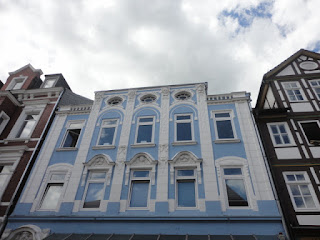 I return on the beaten track, on Bäkerstrasse, where if I look over the many people and hussle at the entrance to the shops, I can discover interestnig colours and very different historical stages coexisting. The food options are satisfactory, from an Ellis Island American-German restaurant, until many German cuisine restaurants and the usual Turkish and Asian fat foods. I ordered some homemade waffles at the Stadtcoffee, a tasty and fast delivery option for a very busy traveler as I am. 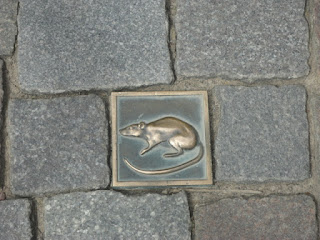 Tourists, many of them Germans, move in small groups, following busy guides. For the solo traveler, there are designated routes, where you just need to follow the small rats tiles from the pavement. Moving around the old city is quite easy and German and English explanations are very frequent. 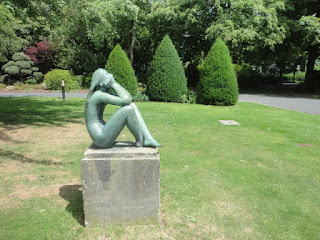 As I am about to leave, I need to recollect my thoughts and impressions after such an intense visit. The quiet alleys of Burgergarten are both inspiring and discrete for my much needed dosis of solitude.
Maybe I forgot anything about Pied Piper more than once during my wanderings, but I am leaving the city with so many fresh impressions and lessons. This is why I love to travel so much: because it helps me see the world with different eyes.
For more inspiration, check the dedicated Pinterest board: https://de.pinterest.com/ilanaontheroad/hamelnhamelin/
Posted by Ilana WD at 3:05 AM