This summer, I spent around 3 weeks in Israel, the overwhelming part of the time in Jerusalem. Although all the travel dreams I had did not materialize, at least I had the chance to live as a local. Here are my old and new discoveries of a very uneventful travel life in Jerusalem. 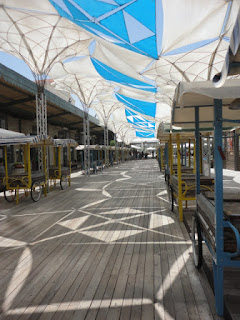 Since its opening, the First Train station remains the main gathering point for both locals and tourists. You can find here food and various events like concerts and book festivals and small artisans displaying their paintings and jewellery works, and a playground for children. From there, you can reach within minutes the Emek Refaim street, with its special designer stores and a lot of good foodie choices, such as the Waffle Factory. Another advantage of this place, especially if you are a tourist, is that it is open also on Shabbat - the Saturday is officially the day of rest here and most of shops and restaurants in Jerusalem, as well as the public transportation cease to work from Friday evening until Saturday evening. If you are looking for organic stores, you can find here a quite big one, overpriced but with quality products. There is another one in Moshava Germanit and another very small one in Malka mall, just if you are a bio-family or individual on the road. 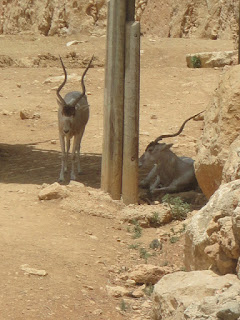 If you have children, a visit to the Zoo is always in the cards. I particularly appreciated the chance of admiring special animals - like the hyrax in the picture - that you cannot find in Europe, specific for this part of the world. There is an area with fish too, and green grass for picnicking. 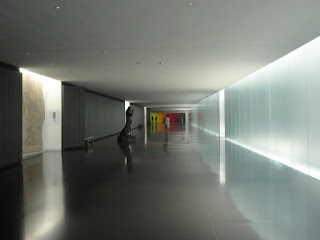 The Israel Museum is not only for tourists. There are special programs for children, and even a particular block of buildings dedicated to activities for the little ones. As for the museum, it is an impressive collection of cultural treasure about Jewish people and artists, from centuries old synagogues in India or Caribbean to archeology and modern art. The revolutionary design of the building, the perfectly shaped long box reflected into the clean waters is another reason to go there, even only for a photography session. It is usually always crowded, some of the visitors coming here regularly, due to the impressive collections that you can hardly overview in only a couple of hours. 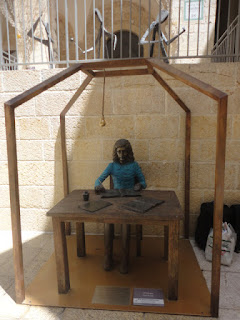 For shopping fans, there are the malls (the Hebrew word for mall is canion): Malka and Mamilla and Hadar, are only few of them. There is a different consumerist culture there, compared with Germany, for instance, and expect a lot of temptations, as all round the year, the customers are tempted with special offers (2 products for one etc.) and big discounts. The food courts are also very well represented and if you are a meat lover as me, count for getting some extra pounds here. Another destination where locals love to go is the Cinema City, not necessarily for the movies - which are not doubled in Hebrew, but maintained in the original English language - but also for the many coffee stores. 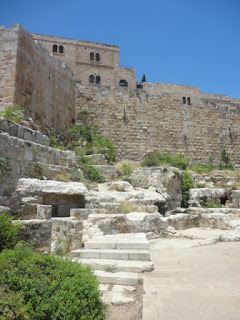 The Western Wall is always crowded with tourists, especially during the summer. Behind the walls, there are still many archeological workshops where new discoveries are made all the time. The hot summer does not deter the scientists to do their job and once in a while you can see them overviewing the sites or searching assiduously in some very remote corner. During the Jewish holidays, places like the Western Wall and the Ramat Rachel are usually very crowded with people from all over the country or even the world arriving to pray. 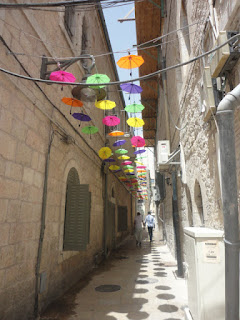 Very close from the city center, but relatively quieter, the area around the Italian Jewish Art Museum is a good choice for a short walk - summers are very hot and long here and you need an umbrella generally only from December until February - if you like small art shops and even smaller local restaurants. You can even rent bikes at Herbert Shmuel street station, a relatively new fashion in the holy city. In the Nahalal Shiv'a neighbourhood, that used to be in the 19th century the third Jewish neighbourhood outside the old city walls, you can find the discrete Hebrew Music Museum, or the fine ceramics and judaica Azoulay store. The area is overviewed by huge skyscrapers, but this is all for now. 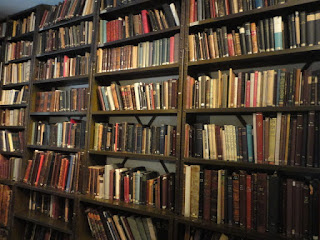 Let's be honest, that a visit at the Shai Agnon Museum, dedicated to the Israeli Nobel Prize for literature, is not necessarily what locals do all the time if ever, unless they are children in school, but this was my tribute to an author I studied and read a lot, and appreciate for the taste of the old country he succeeded to preserve through his writings. The English audio guided tour of the house is quite comprehensive and offers many insights about the architecture of the house and the cultural and historical ambiance of his life. Close to the house, the Arnona neighbourhood is a mixture between old houses and bold skyscrapers, with jogging lawns and huge vegetation covering the gray buildings. From Walter and Elise Haas Promenade, you can have a full overview of the old city, while you rest on the grass or watch a music concert on the small stage. 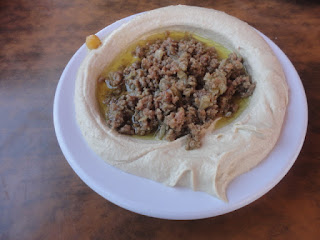 Back to my passion for meat, there is an old and a new place I visited this time. The old is the Bibi restaurant, with its infinite choice of salads that accompany the generous skewers or other meat plates. The new finding is Hummus Talpiot, with its minced meat in the middle of a big olive oily portion of hummus. Eaten with fresh pita. Whatever the meal I chose, the lemonade is the natural companion, with exactly the amount of sugar and the number of mint leaves you need for a great taste. 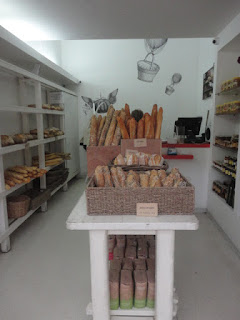 In the Moshava Germanit, the French pleasures abund, either as baguettes - not everyone come along with pita as perfectly as I do - or as fine choices of cheese or (French) wines too. The prices are a bit higher than usual, but the taste of France delights is priceless. As for now, I am still looking for some high-end French delights and a normal pastry shop, except the very special one at King David Hotel, which I love a whole lot. 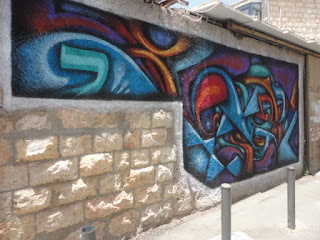 There is street art in Jerusalem too, not only in the hipster Florentine in Tel Aviv, but the art here has more style and some combine the old Jewish art with the challenges of wall spray. The most colourful area is around the Bezalel Art Academy, a very respectable university, with a high record of training very talented book illustrators and fashion designers. 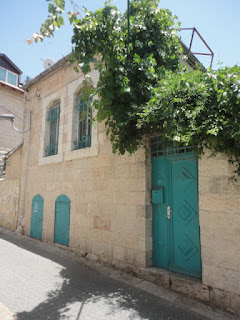 The Nachlaot area jumped lately high on the top of expensive real estate areas because it is authentic and doesn't have the impersonal touch of skyscrapers - which I love in NYC, but not that much in historical cities such as Jerusalem where they look like a giant grotesque implant. The small streets and colourful doors, with their generous green vegetation are a nice refuge from the buzz of the city around. Many artists and local famous people live there, and you can also find small potery shops or workshops. 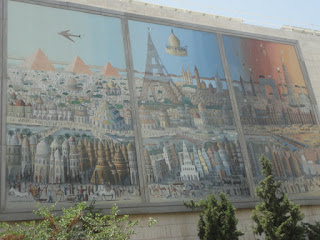 Near the Behar Art Center, more elaborated street art. Even in Berlin I cannot find anything that detailed and painted like a real work on canvas. 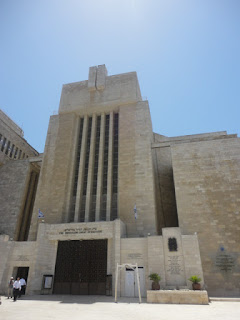 The Jerusalem Synagogue is of relative young age, being built 25 years ago. Many locals choose this location for bar mitzva or other joyous celebrations like weddings. It can host over 1,000 people, it has a big hall and special classes all round the week. I particularly appreciated the exhibition of mezuzot - doorposts - with centuries old items from all over the world, as well as the colourful stained glass displaying various natural and religious scenes. I usually love small spaces of the synagogues without too many people, when you know everyone and where you feel like home, but I can also understand the strong message of big synagogues like the big Belz one. For religious people, Mea Shearim area is the main destination, either for purchasing various religious items or for spending holidays in an authentic environment. Everytime I am in Jerusalem, I make sure to visit a specific bookstore, with books in both English and Hebrew. 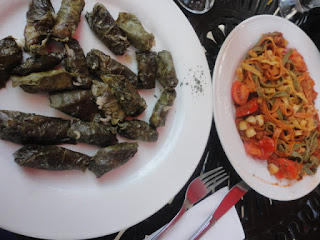 Between Talpiot and Emek Refaim, there is Baka neighbourhood, in the South of the city. There is a skate park for active youngsters around, many fruit stalls and European looking cafe places. Out of the beaten path, I had a tasteful afternoon at the Caffe b'gina - coffee in the garden - restaurant. In the huge garden, I had my experience of Armenian Wineleaves - very sweet, and it was not only because of the vinegar - and salmon tagliatelle. 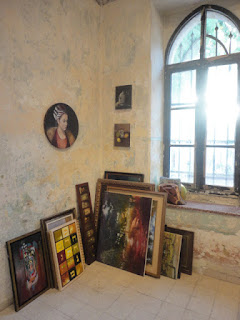 During these three weeks, I developped a new visual habit: voyeurist of art galleries. At Beit Hasid Gallery on Emek Refaim, I admired the exhibition by the professional musician and self-made painter David Louis,depicting everyday Jewish life, but also thoughtful human profiles and daily activities. 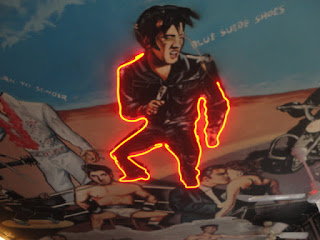 There is not high art, but a lot of visual kitsch, at the Elvis Restaurant in Abu Ghosh, one of the most famous destination for Elvis fans in the Middle East. Groups of tourists arrive here regularly, having a look at the image of the Memphis idol jumping or singing or doing other activities in every corner. Michael Jackson visited this place too. And me. But I am not a fan of Elvis, only of the good food they serve here: a lot of salads, and meat, and freshly baked pita. It is also opened on Saturdays, so expect to wait a bit if you did not make a reservation or if you don't know the owner, who is often around, either asking people about the quality of services or debating daily political evolutions. Fans and owners of vintage cars meet here regularly as well. 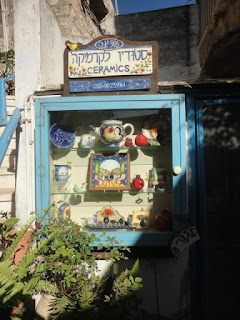 On my last days in Jerusalem, I visited an area that was mostly foreign to me until now: Ein Karem. It has a high concentration of churches, but also its share of art stores and ceramics and art galleries too. And some delicious icecream that you can buy from the small store of the House of Chocolate. The ups and downs streets are full of colours and recently, of bikes too.
This last trip to Israel was this time completely out of the planned path, but at least, when I look back now, I learned some new tips and, at least, had enough time to see, even for a short time, some of my favourite people in the world. Not that bad, after all.