Last year, I've worked for half a year in an area that I hardly visited before: Moabit, although it is just 15 minutes away by bus from the fancy Ku'damm. An area which is changing a lot, with a fantastic mixture of good and affordable food parlours and always a very good and welcoming service. 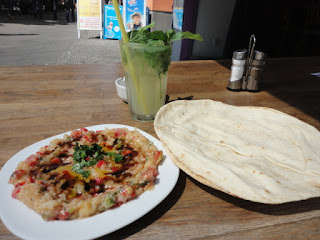 You do not have to go too far away to find the main foodie attractions, you just have to stroll alongside Turmstrasse and everything is one plate away. One of the first places I fell in love with was Mom's kitchen, where I first ordered a hummus and pita, plus lemonade - because only the Middle Easterners can do the right one. The hummus was unusually sour-sweet and perfumed, with pomegranate, not too salty, but a good treat for the hot summer days. When asked about the special hummus recipe, I was told that this is how it is prepared in Syria, the country of origin of the owners. 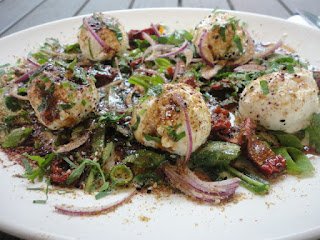 Another day, at the same Mom's kitchen, I ordered a plate with goat cheese - one of my top favourite - and a mixture of greens, soaked in olive oil. Maybe it was not that healthy but once in a while, it is good to try something new. 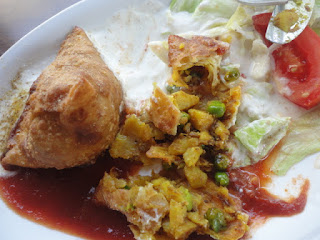 A couple of restaurants away, on the same street, there is a Pakistani half-restaurant, half-canteen, ZamZam, where I tried some veggie delicious samosas, accompanied by yogourth and fresh tomatoes. The mashed potatoes-corn-peas combination was a good match, and the meal was more than satisfactory. 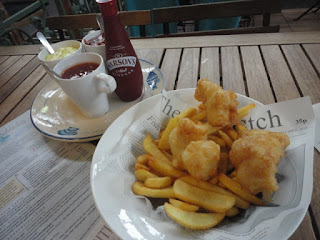 Moabit is also the place of many open markets, many Turkish and Middle Eastern ones where vendors are screaming lound the offers of the hour, but also of a big Asian store, with cheap and fresh products, you cannot find in any parts of Berlin - not even in Neukölln which is becoming little by little too fancy and expensive too. A BioCompany store opened on the same main street warns that Moabit has the potential of a hipster place too, but maybe not the next 2 seasons. When I was looking for some more foodie options - as it was not enough what I was having around my workplace, I was heading to the Arminius Markthalle, for my fish and chips fix. Probably the most authentic in town according to, with an assortment of tasty sauces.
Some Chinese fast foods and small restaurants are also available, bringing more geographical and culinary diversity to the area. My lunch fix once in a while was the veggie rice box at Fam.Dang where you can watch from the other side of the window how the rice is made. Last but not least, you have a steak house - I was told the meals are delicious and well done - and a soup parlour, with every day of the week its soup. Since December, Fam. Dang is neighbouring a colourful donoughts' shop, with various creative frostings. 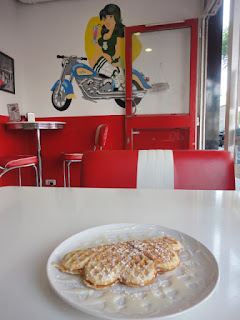 The delicious Turkish sweets were calling my name, and once in a while I indulged in some small bits of baklava or kanafeh - my favourite sweet in the world that I can eat non stop...till I drop. Every morning, I used to take my special goat cheese ackma pastry - a round bread dough filled with goat cheese and covered by black sesame seeds - from a small shop near my office where people used to welcome me with a friendly smile every time. I even tried once to ask how the dough is made, but they prefer to maintain discretion over the recipe.
In case I wanted some more Western-style sweets, the Waffly store was my choice also because the service never disappointed me - very fast, as requested to cover my hunger needs for my short office breaks. Looking as an American pin-up store with red leather couches, it offers for around 3 Euro many choices of sweet sauces and fillings for the homemade waffles. One of the best I had in Berlin, and I tried quite a lot in the last months.
My time in Moabit seems very far away now, after all the things happening into my life after the baby was born, but when I look back, my memories of the good working time do always have a good taste and Oriental fragrance.