How to spend six hours in Tel Aviv 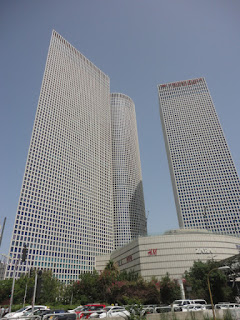 This summer, I spent three weeks in Israel, with headquarters in Jerusalem. Although the distance to Tel Aviv is of only 45 minutes by car, the challenges of being on the road with a baby and other inconveniences, kept me away of one of my favourites cities in the world. Aware that time passes and I am in the danger of not going there this time, I decided to take the 1h20 minutes train ride and just go. With only six hours to spend, what can I do first? As usual, I followed one of my many survival mottos: When life gives you lemons, be smart enough to make out of them the tastiest lemonade.
Here I were, at the Shalom train station, admiring the beautiful Azrieli Towers. When was the last time when I saw sky scrapers? 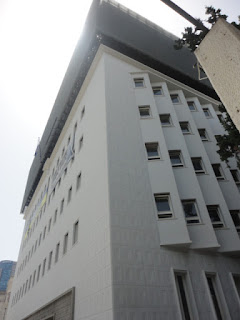 Following Eliezer Kaplan street, I went along the many outlet stores and expensive boutiques guarded by the bold skyscrapers, with exotic trees at the entrance. At no. 8, a special building was offering another sample of Israeli creativity: the house is made of 4017 panels of 9 different sizes, with a façade designed in consideration with the hot climate and environment protection. 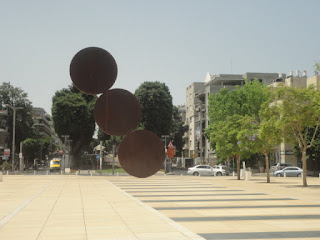 After another couple of minutes of walking, I reached the interesting architecture of Charles Bronfman Auditorium, the main destination for art lovers in the city. During the week, the esplanade in the front is the favourite meeting place of families with children and of various street artists. This time, it was only a guy screaming loud with big headphones on his ears. Sometimes the hot summers can be hard to cope with. 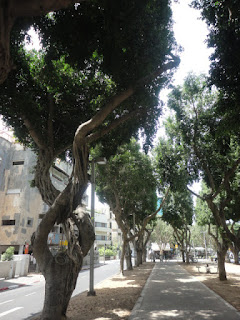 Looking for more shadows and fresh air, we went along the Rotschild Boulevard, in the middle of the historical buildings, many of them in process of full reconstruction. 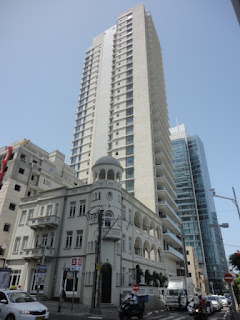 As usual when I am in this city, I cannot stop admiring the hard contrasts between the old and very new, the traditional spirit and the creative chutzpe. 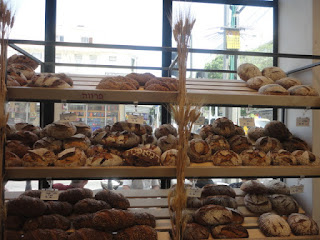 At Allenby 88, it was time for some bread tasting and some fresh lemonade. Another stop followed a couple of minutes later, at the beautiful DaDa bistro within the French Institute, one of the many French islands in the middle of Tel Aviv serving special pastries and an exquisite Made in France menu. 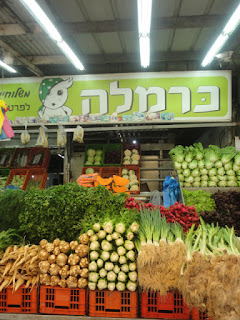 For some more authenticity, heading to the Carmel market is the best move. You can check there the latest fresh veggies and negotiate some better prices for big purchases. Tired by so many discussions, a fresh juice on one of the stands will bring the good energies back. 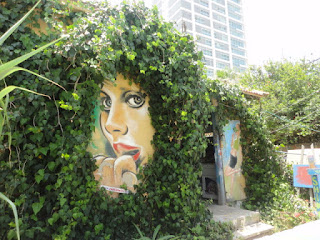 Visitors to Tel Aviv, usually head to the Florentin area for some good samples of street art. This time, I did not need to go that far, as on the way to the beach from the market, I discovered some artist small houses decorated in the most creative way. 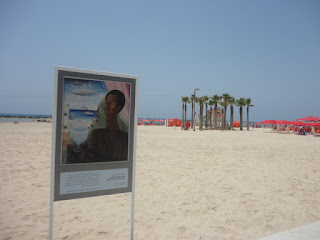 At Bograshov beach, a new attractive project was launched, aimed to bring some more learning to the beach goers. On the way to some beer at LaLaLand or some long swimming or shisha, you can have a look at some paintings by Jewish artists displayed in big reproductions, plus some words in English and Hebrew about the artist. Learn something new every day, right? 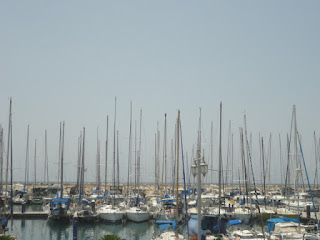 The view of the boats waiting in the port, moved slowly by the heat wind is as artistic as the view of a painting. A kind of still life very much alive, in the style of Van Gogh. 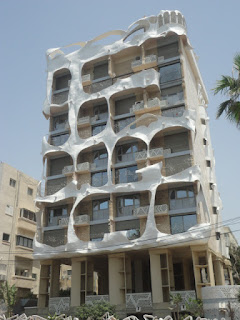 I was out of time, but even if I would have one hour to spend in Tel Aviv, I would prefer to spend half of it going to say "hi" to my favourite house in the world, on Eliezer Perri street. Its creative balconies and shapes make me think about Gaudi and its world of architecture dreams. Mission accomplished this time too! 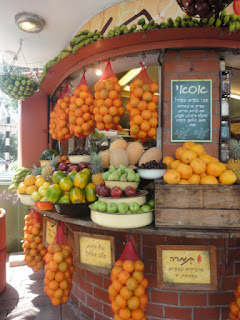 Now, I can return back to the train station slowly but happy. On Ben Yehuda street, before checking some interesting shops and design stores on the fancy and expensive Dizengoff, I went for another juice, a fresh combination of mango, dates, milk, oranges and figs. 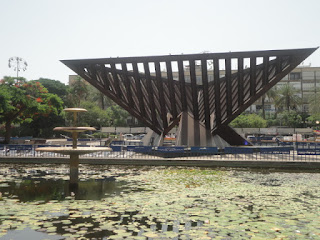 The famous Kikar Rabin - Rabin Square - the usual place of gathering for demonstrations was quiet, but behind the lines, preparations were made for the Hebrew Book Week Fair, a regular event taking place in several cities across Israel, aimed to bring the best of Israel publishing to the public. 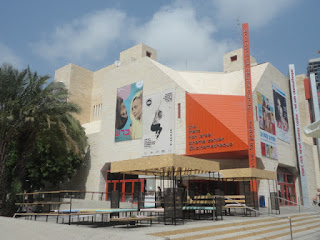 The Cinemateque is another cultural destination in the city, with a good selection of movies around the year and festivals displaying the best of Israeli and Jewish movies. This time, I preferred to have a look at the games of volumes ending up in delicate angles. 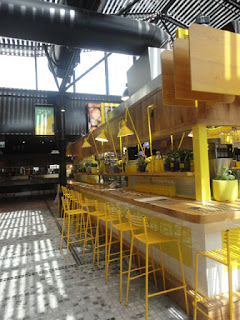 Before I go back to Jerusalem, I wanted to stop at the Sarona Market. One week before, a terrorist attack took place in the middle of this elegant place with restaurants and food stores. If not the corner in the front of the place where the terrorists killed innocent people with candles and flowers, no one would have thought that a terrible tragedy took place here. It was business as usual in a country where terrorism is part of the everyday life, long before Europe started to cope with the current terrible challenges. Life must go on... 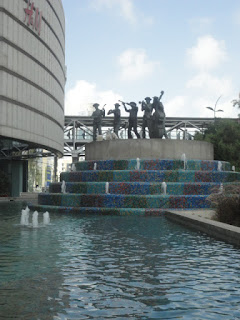 When it was about time to leave, I just enter the train as a richer person: happy to see old places, to discover new tastes and impressions, with a new tan and a heart that knows that, after all, even the small amount of 6 hours can be well spent in an overwhelming city. It is all for good.