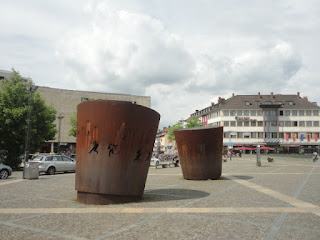 Once you succeed to emerge from the huge Osnabrück train station, there are two huge rusted metal scrolls close to the entrance. One is pierced with silhouettes of soldiers, the other with arrows. How many soldiers will die by the arrows? How many arrows will miss their target? Welcome to the city that prides itself of playing an important role in putting an end at the deadly 30 Years War, one of the deadliest in Central and Eastern Europe in the 17th century. It started as a conflict between the Protestant and Catholic European states but soon will forget its initial religious motivation by being a war for reconfiguration of power. 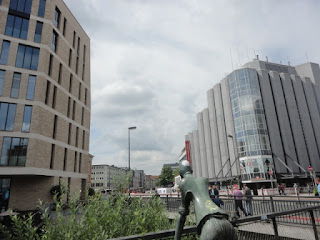 During my short stay in Osnabrück, I've learn how to read the different architectural, cultural and historical layers displayed all over the city. It is not that easy and the first temptation is to reject its aspiration of being a city with its dynamic and young life and to save the memories under labels such as 'not interesting enough', 'oldish' etc. As for me, I decided to look at everything I was about to encounter differently, once I find caught myself in the Neumarkt area, with its bold architecture adorned by green oasis. 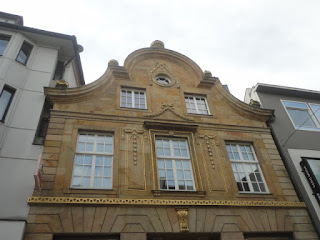 The city was destroyed at a great extend during the WWII, but samples of old merchant houses, decorated delicately still remain, stuck between two modern buildings maintaining the first original heights. 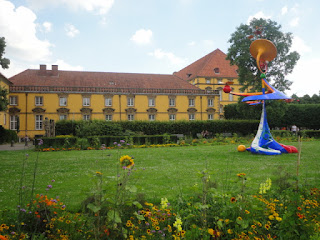 The main engine of change in the city is represented by the young people from all over Germany and the world who are coming in this Lower Saxony city to study at one of the youngest universities in the country. Created in the 1970s, with offices hosted in the old baroque castle, the high education institution has modern locations and campus all over the city. 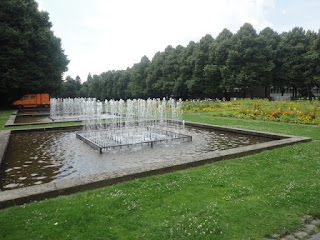 The benches of the beautiful large park were full of people reading under the welcoming summer sun. 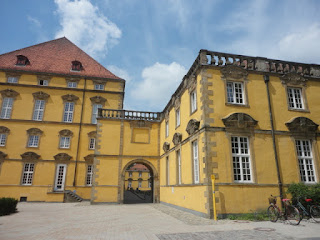 The castle is not pretentious, with many buildings and big courts where during the summer open air kinos or concerts are inviting the locals and visitors to mingle and enjoy the short but intense warm season 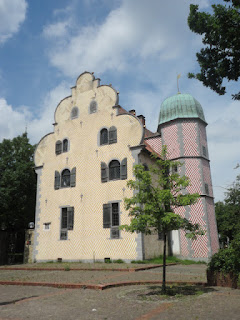 The eclectic architecture style of the city buildings send a message that, at least in history, some epochs happily co-exist. These noble Renaissance buildings, from the 14-16th century, were rebuilt in the 1970s and offer a joyful view that make you think an eccentric contemporary architect had a good happy day. 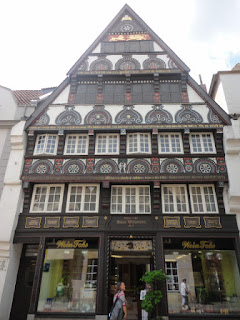 All around the old historical area, timbered houses are well integrated into the modern lifestyle, with modern shops and restaurants at the ground level and offices and home appartments at the upper levels. 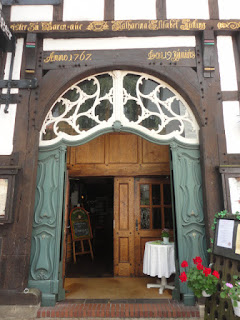 Some of the doors on Große Straße or Kamp Promenade are just too inviting to refuse the invitation, regardless where you are supposed to enter. Many of those entrances reminded me of the colourful houses of Celle, another interesting destination close to Hannover. 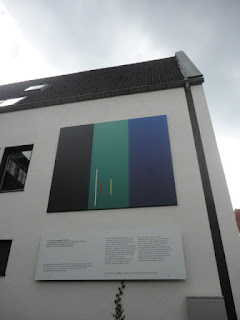 But one in a while, some creative corner or colourful abstrat art using the public walls as exhibition space  bring you back to the modern times. 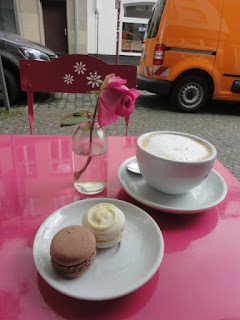 At Le Petit Cafe, I made a short stop for some delicious mint peas soup and a cappuccino with local versions of macaroons. The ambiance is pleasant and with the coming and going of the customers and the exchange of smiles and pleasanteries, I am just about to feel like a local here. 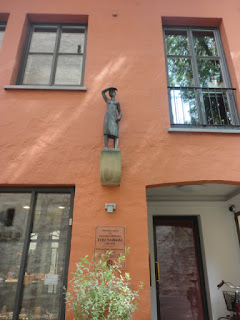 The historical center is bordered by old walls and towers reminding the historical destiny of the city. One of the gates, Waterloo - or Heger for the locals - , a triumphal arch in the style of the Arch of Titus in Rome is a reminder of the German soldiers from the city who fought at the battle under the British command. Within the walls, the delicate statues on the top of the entry to the house were considered a symbol of social status. Nowadays, it can just help you to remember where did you park your bike. As everywhere in Germany, biking is a social habit embraced by all social and professional and age categories and Osnabrück has many bike lanes that can make your visit to the city a faster and richer experience. 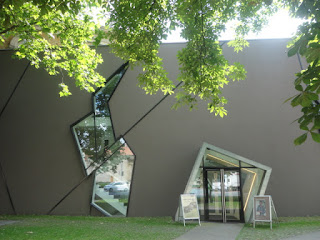 One of the main reasons I wanted to visit Osnabrück in the first place was Nussbaum Museum. A surrealist painter, Felix Nussbaum offered heartbreaking testimonies into the singular loneliness of the artist and the individual refusing its gregarious condition, in general, during the hard times of WWII. He was born in this city but traveled all over Europe for studying arts. Returning to Germany, he had his studio in Berlin, but in the 1930s, he was permanently harassed for being Jewish. Leaving Germany, he and his wife went to Paris and Belgium, where they kept hiding while continuing to work. Among one of the representative paintings of this time is the Self Portrait with Jewish Pass. Arrested, he and his wife, herself an artist too, will be murdered in Auschwitz.
The memorial house was open in 1998, and has an impressive number of his works - although not all of them. Planned by the architect of the Jewish Museum in Berlin, Daniel Libeskind, it succeeds to embrace the visitor in an ambiance where loneliness alternates with the illusion of light and hope. Ugly concrete walls are embelished by fractured windows at the end of narrow halls. A very strong message sent from the silence of the undefinite sadness for the deep lows the human condition reached during the last war in Europe. 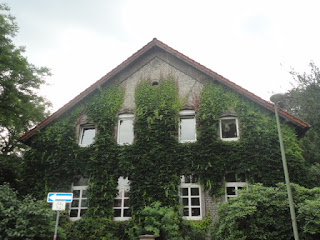 For the next hours, everything is about the small green streets and houses covered by ivy. There were strong impressions and feeling that needed some serious emotional draining. 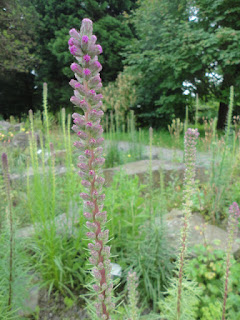 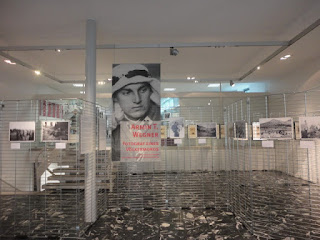 Back to the busy center, the Erich Maria Remarque - the famous war author was also born here - Center was hosting at the time an exhibition showing the insights of Armin T. Wegner, soldier in WWI, medic and author, into the terrible Armenian genocide. Osnabrück, one of the main locations besides Münster where the treaties that ended the 30 Years War were signed, profiles itself as a source of inspiration for peace studies hence the focus of many cultural activities and institutions on the peacekeeping dimension. 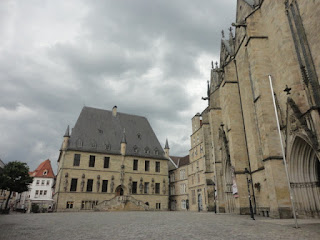 Am Markt, historical ages melted together again. From elegant design and fashion stores to outdoors Italian restaurants and religious institutions, there is everything for both the short and long-term visitor and the local. As the weather is turning from sunny to cloudy to aggressive drops of rain, for the time left in Osnabrück, I am forced to check the commercial part of the city. Some stores are really cute and inviting, with vintage and local products offering a glimpse into the local creative spirit too. 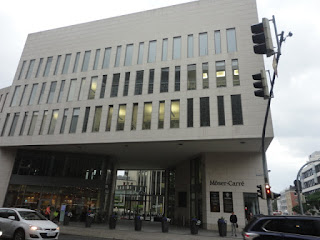 On the way back to the train station, the impressive architecture of the Möser Carre, named after a 18th century journalist, is a reminder about the potential of this city: surrounded by old walls but young at heart and ready to impress, even the short time visitor like me.
Posted by Ilana WD at 1:06 AM