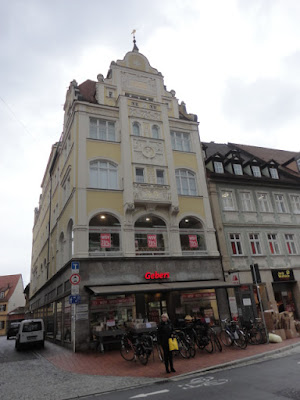 When the start into the new year was a big clumsy, and you have no idea how things will go and where, and you are about to have your birthday and you don't like birthdays, anyway, the best think is to book a trip. To Bamberg, for instance. This is the best I can offer myself and I am proud of my generosity. After a couple of hours of ride from Berlin, I was there with the baby D. and checked in at the centrally situated Hotel Bamberg. The beautiful architecture spotted on the way to the hotel was already a good sign for what was about to come soon. 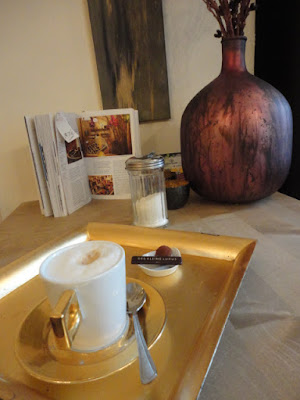 Let's the celebration begin, then, with a stop at the elegant and cosy Storath Confiserie, with a tiramisu truffle and a cappuccino, served with goldish style. The Confiserie is present in Bayreuth too and offers a tending to infinite list of fine chocolate. My palate still remembers. 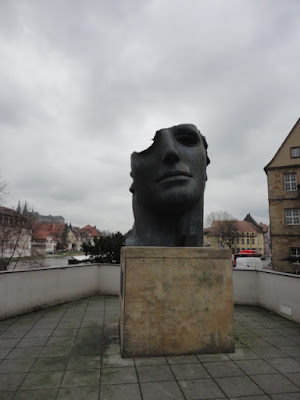 A walk through the city, although the dark is about to set and it's not even 14.00 o'clock reveals more visual surprises. As for now, I only want to feel the city, and I am walking along the Lange Strasse and near the shores of the Main Donau Channel. 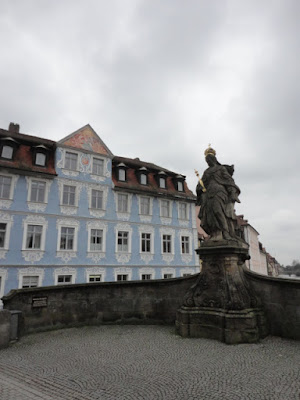 The colourful pastel houses are beautifully adorning the cobblestone streets that seems to keep the same old feeling for centuries. A former important center of religious power in the South of Germany, Bamberg is praised for the well preserved architecture that offers a sample of typical settlement from Central and Eastern Europe in the Middle Ages time. 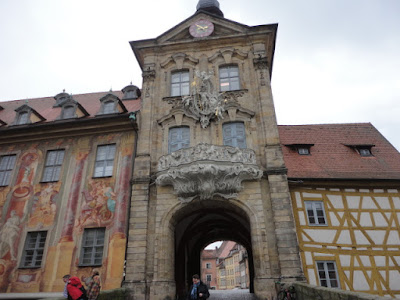 When I see the beautifully painted walls of the Old Cityhall, I feel back in time. Actually, this was the predominant feeling that I am time travelling and although people might be modernly dresses, they could be part of the same trip. Some flamboyant additions to some of the public buildings remind me a lot of my favourite streets from Prague or Budapest. It seems that I got the perfect ticket for more than a trip. 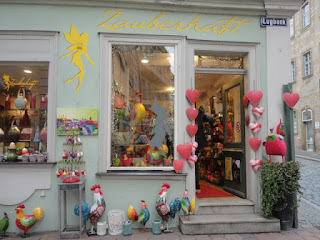 Some shops do have more colours than the others, bringing life to a day that it is about to end in full darkness. 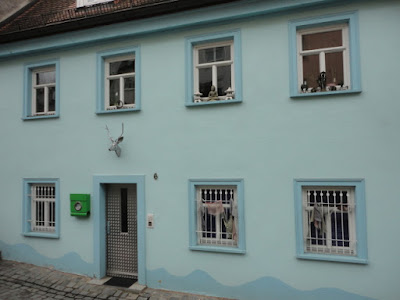 While some simple houses do display some surprising, although a bit kitschy decorations, but after all, the modern art showed that there are no taste limits unless you suffer of the unpleasant sickness called bourgeoisie. 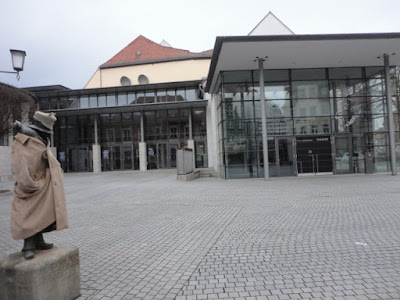 Life in Bamberg during the winter time is not that boring. The Romantic writer E.T.A Hoffmann directed between 1808 and 1813 the theatre that bears his name now in Schillerplatz. The theatre is a main attraction for both the visitors - speaking German - and the locals. Another famous resident, but without a statue in his honour is the famous German philosopher Hegel. 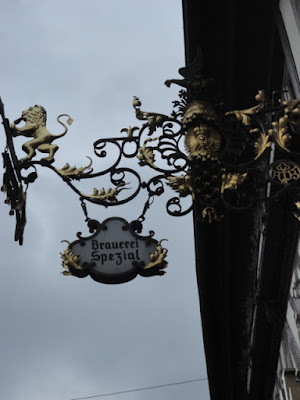 For leisure seeking guests, Bamberg has many local breweries offering the golden drinks based on traditional recipes kept more or less secret for centuries. As in the case of the old city area - part of the UNESCO World Heritage - you still have the feeling of being just a visitor from another century in a world that didn't change a year since the glorious times of the Middle Ages. For those curious to taste other drinks, there is also a Bamberger Puntsch Manufaktur, just sayin'. Those looking to return back home with some special fine foods from this Franconian area of Bavaria, the Müller Delikatessen is recommended. 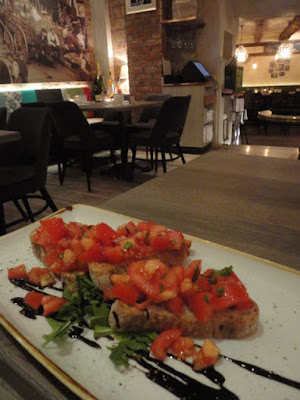 As the dark is about to set, it is my search for a good lunch that starts. As I noticed in many other parts of Germany, between 14 and 17, or 18, many restaurants are closed so unlucky you who wants to have a later meal The first consistent stop takes place at the colourful old house of Little Italy where the service is good and the bruschetta and the pasta are made with simple ingredients and delicious results. 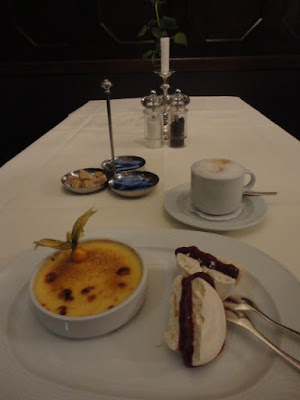 To finish the evening in style, I want to take the desserts at the sophisticated menu looking Hotel Messerschmitt. It is my birthday, after all, and I deserve it. But it seems that the personnel doesn't feel the same, as the service was precarious - to say it diplomatically and the much expected lavender creme brulee was fine, which means it belongs to the category of sweets I can do it at home too. And according to the experts, creme brulee isn't exactly my strong foodie point. 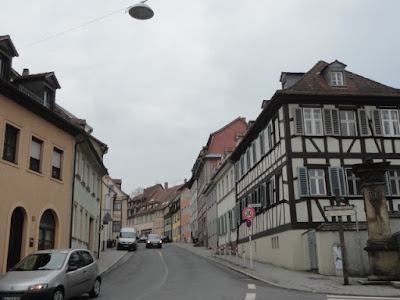 But hopefully, there is always a new day when walking the streets of the old town, I almost forgot the unpleasant experience from the night before. There are too many interesting places to discover from the timbered houses lining up with simple buildings... 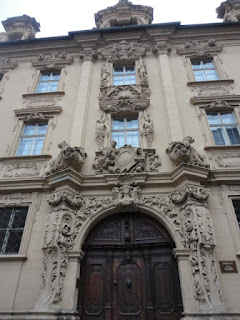 ...until the flamboyant architecture where the statues and decorations seem to be about to jump out of their frame and talk to the visitors. 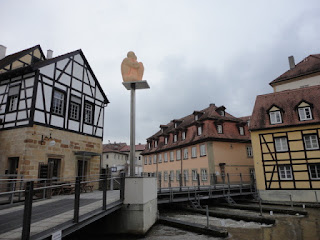 I am exploring carefully canals and side streets, like Fischerstrasse or the area near  Markusbrücke, 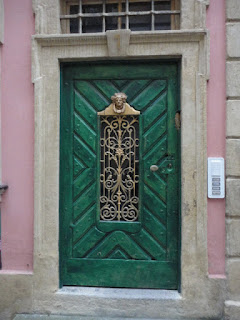 ...about to knock at doors just because it seems impossible that average human beings can live behind such beautiful doors bordered by pink walls. 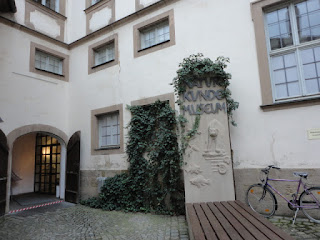 For a cultural break, there is the interesting Museum of Natural Sciences, close from the old Markt where all the commercial and trade activity is focused. 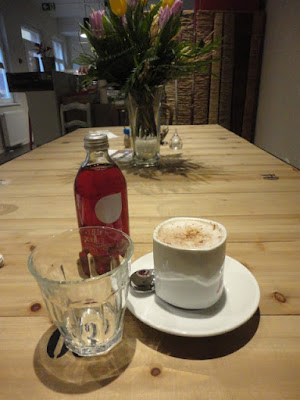 In Bamberg, I had the experience of the first baby coffee place in my mother life, Leander, where mothers can chat together about - obviously - baby things, while the little ones are crawling all around the space. Travelling with a little is not easy, although not impossible, so discovering people dealing with similar problems is a soothing experience. 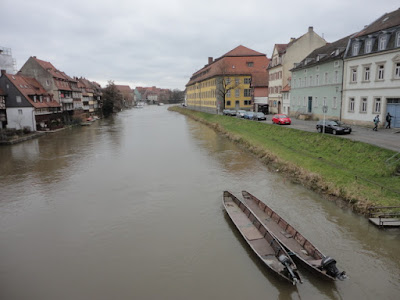 Especially in the summer, the Little Venice area is a main attraction for both locals and visitors, for its special feeling, near the water and with a view over beautiful architecture. I made a mental note to return during the warmer season, maybe the next year. The area looks picturesque even under the sunless sky of February. 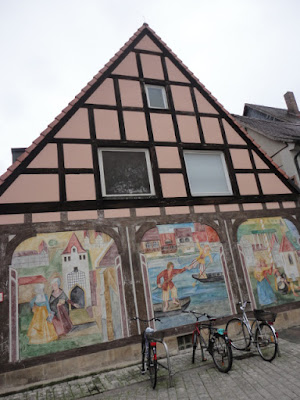 I might say that Bamberg is one of those cities where I enjoyed travelling despite the cold and unfriendly weather. Either I was discovering the city architecture or some modern street art inspired by the overwhelming past, or I was just walking up to the city heights on the cobblestone streets to the Michelsberg area - not very easy to navigate when driving a baby pram -, the pleasure of seeing and discovering a new place persisted. 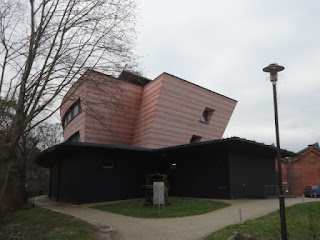 The afternoon of my last day in Bamberg was reserved for friends. After many years of chatting and sharing, I finally had the chance to meet in person the amazing Friederike Schmöe who shared with me some of her favourite places in the city, not few of them locations of her successful crime novels. Besides theatre, the concert hall is another important cultural attraction in the city, and Bamberg Symphonic Orchestra is considered one of the best in the region, country and Europe. 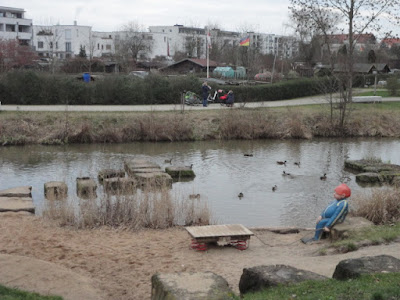 The park around the location of the Bavarian Garden Show and Flower Exhibition might not look very attractive in the winter season, but it is good enough enough for biking and walking slowly and breathing some very fresh and cold air before the night is set for good. 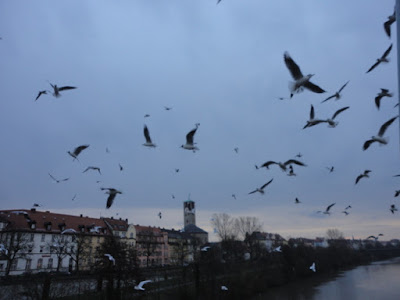 When the next day, my time in Bamberg is over, I am not only a bit wiser but just was about to know an interesting place with its histories and beautiful old houses. This is what my life journey should be about. Cheers to many more trips to come!
Posted by Ilana WD at 2:07 AM