A visit to Hohenschwangau and Neuschwanstein, Germany's and Bavaria's most famous castles was on my travel agenda for a long time, but it always took me more time to decide to visit a too popular destination, because need to find more than the popularity reason to go there. However, working intensively to discover more of Germany these months, I decided that it was about time to start with some staple destinations and if in Bavaria, how can I skip them? 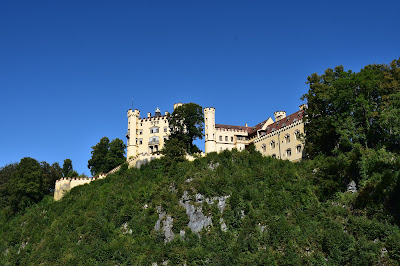 I've arrived early in the morning to Füssen train station from Augsburg with a regional train after around two hours-ride. 5 minutes away from the train station, there is the bus stop, that comes every 10 minutes and even more often during the weekend. From there, with a 2.52 bus ticket - 2 ways - you arrive in around 15 minutes. If you are travelling with a baby pram, expect some more time, as it might be quite busy and in a bus there is place for maximum 4 buggies. Walking until there may be one hour and it can be a good solution when you want to avoid a crowded time and you have the advantage of beautiful surroundings. 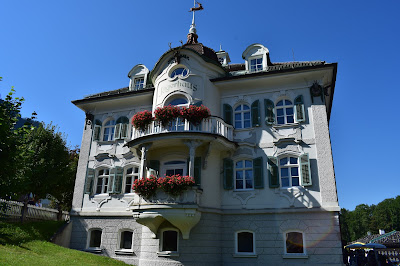 From the bus station, you will easily find your way to the ticket center following different arrows. For each castle, there is a specific time when you can visit and only with a guided tour. The tours can be in German and English, but the guided audio tours are available in many more languages, among which Spanish, Mandarin, Greek, Polish, Japanese, Portuguese and Arabic. You can book the tickets online, but you still need to wait in line to get your final confirmation. For one castle, the price is of 12 Euro, for two of them 20. The waiting time can be between 30 minutes and one hour during the rush hour, but the line goes quite fast. As there can be some waiting time between the tours to the castle, one can also book a visit to the Museum of the Bavarian Kings - which I didn't. If you only want to visit this museum, you can go directly there for your ticket. 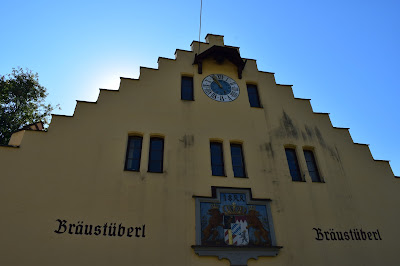 Once I had the tickets in my pockets, I finally had time to see the surrounding. The area is quite crowded with restaurants and breweries where you can wait until the hour of your tour arrives. The distance between the two castles can be made by foot, if you have comfy, sport shoes. For the elegant outfits with high heels and everything, you have to wait for a carriage that can bring you to one of the castles in complete Cinderella style. There are also buses connecting the two castles. 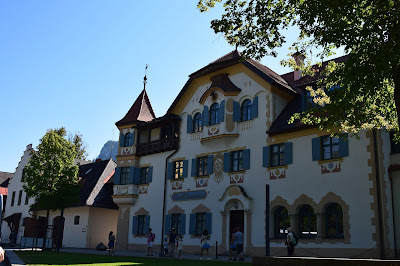 Moving around is relatively easy, as you have maps and arrows and at any time you can just join one of the groups and follow them. There is a big parking place near the Ticket Center where you can leave your car and start your adventure in the middle of the beautiful Bavarian nature. 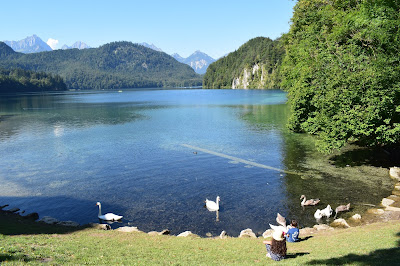 The nature invites to a hiking adventure, and there are specific routes that can be done in less than one hour. You can even rent a boat to cross the Alpsee lake, and admire the beautiful swans whose presence in this part of Bavaria is mentioned in the name of both castles - Schwan means swan in German. Schwangau means literally the Swan district. 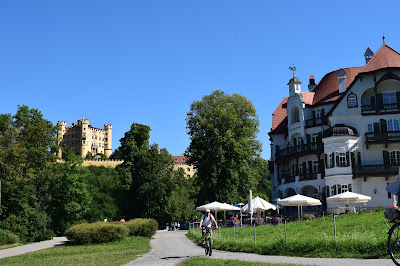 Biking tours are also possible and it seems that at least for a second, walking into the forests might be a better idea than wait for my tour. Somehow, the view of the Hohenschwangau castle convinced me that I should keep up with my travel plans for the day. 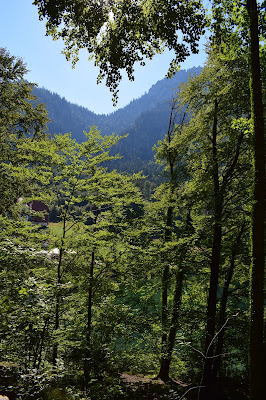 From Alpsee, the walking until Hohenschwangau takes around 20 minutes in the middle of a forest. It is an easy ride and you can fill your city lungs with fresh air. As in the case of Neuschwanstein, I couldn't stop thinking how was it possible to built those castles in the middle of the wilderness, without using the modern technology and transportation from nowadays. Unfortunatelly, those are not information transmitted during the guided tours. 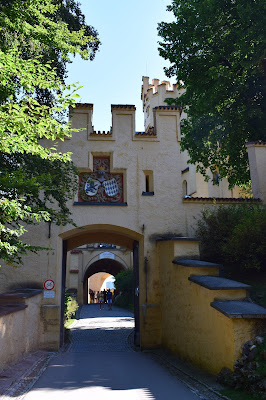 Initially, Hohenschwangau (Upper Schwangau) was built in the mimddle ages, around 1363, and went through different hands and periods of glory - or decay. In 1567 it was bought by the Duke Albrecht V of Bavaria and was used as a fortress, a strategic pawn in the local wars for power. At the beginning of the 17th century, it was abandoned and continued to be a ruin - after being plundered by the Austrian troops at the beginning of the 1743 - until Prince Maximilian II of Bavaria decided to bring it a new glory. He discovered it during a walk in the area and was impressed by the surroundings. 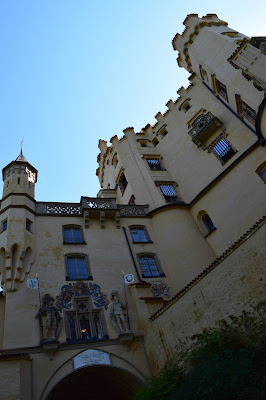 In 1832, the Italian architect Domenico Queglio started to put into practice the ideas of Maximilian II of Bavaria of making the castle a neo-Gothic jewel. The old walls were reshaped and around 90 wall paintings representing the history of the area and local Medieval legends were plastered. 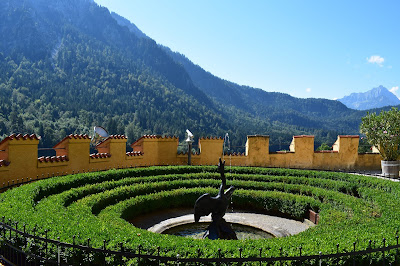 One of the most beautiful part of the castle is the garden area, where elements from the Spanish architecture and other details of inner architecture are brought offering a spectacular view, especially if you consider that everything was created on the top of the walls. 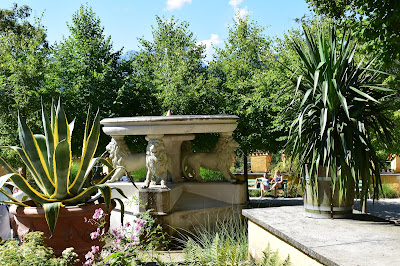 The idea of the garden belonged to Marie of Prussia, wife of Maximilian, who spent here the summers, together with her sons, Ludwig - the historical Ludwig II - and Otto. Exotic plants and finelly crafted statues are the human made addition to the existing beautiful landscape. The lions supporting the fountain are inspired from the similar image from the Spanish Alhambra. 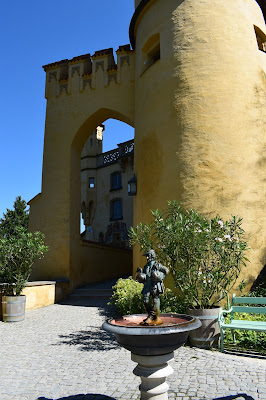 The guided tour of the castle lasts around 30 minutes and as in the case of Neuschwanstein, is quite standard, with some questions allowed, but don't expect too much information, especially if you are looking for some specific details. As you are part of a group - that can be of around 30-40 people - you cannot stay behind, so you have always to rush to catch up with the rest. Photography inside the castles is not allowd. An inconvenient I noticed in the case of both castles is that there is no possibility to visit if you are in a wheelchair. If you are with a pram, you have to carry the kid with you. 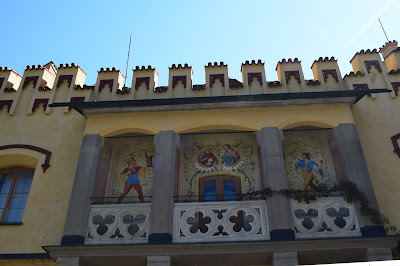 Despite number of inconveniences, a visit at Hohenschwangau is quite interesting, especially if you are into history and historical myths especially. 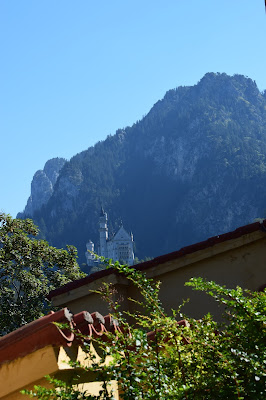 Neuschwanstein castle is the history of an illusion, the alternative world of a king - Ludwig II - who just lost his kingdom to the Prussians, the Empire of his mother. Left without throne and unable to understand the political challenges of his world - among which the constitutional monarchy and a more democratic rule of law - he created his own universe, inspired by the Middle Ages and the Baroque, times where the ruler was endowed with full power. 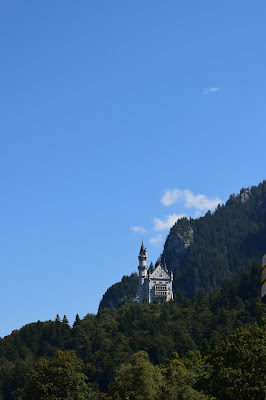 His inspiration for the creation and decoration of the Neuschwanstein was the composer Richard Wagner, whose famous Bayreuth I had the chance to visit three years ago. The legends of the German Middle Ages that Wagner cultivated in his works - Parsifal, Lohengrin or the King of Swan, among others - created the base for a new mythological mentality, turned more to a beautified past than focused on the daily realities. For Ludwig, this was the perfect refuge, it seems. The ideologic programme at the castle was coordinated by the art and literary historian Hyazinth Holland. 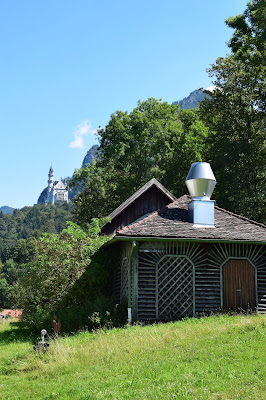 The main rooms at Neuschwanstein - that for a short time also used to have an elevator, which was a very revolutionary fact for those times - are decorted using themes from the Nordic and Germanic stories. A more glorious version of the 'Singers Hall' from Wartburg, a monument to the chivalric culture of the Middle Ages, was created, but without the ceremonial function attributed to it. 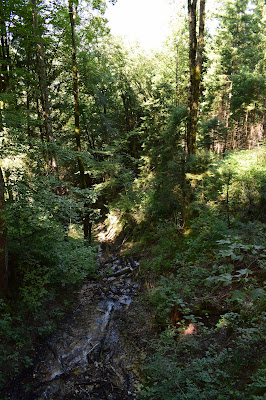 Walking to the castle is a good opportunity to think about the coming and goings of history, especially when it comes to the eccentric personality of Ludwig. The costs of building the castle were growing and growing, and Ludwing ended up heavily in debt, but convinced that he has to finish the construction and the ever longer list of decorations and additions. For instance, he created also a small artificial grotto, based o the similar grotto of Venus, from Tannhäuser, with coloured electric lightning and a real waterfall. 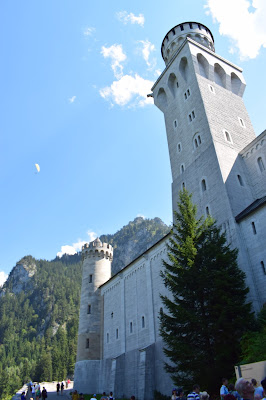 Ludwig was an autodidact and he elaborated many of the plans and technical detail of the reconstruction works. He decided, for instance, to create a steel construction, encased in plaster, quite a new idea for the time. As in the case of Hochschwanstein, it is hard to imagine how the construction works actually took place, given the difficult location - on the edge of a mountain - and the upward slope in the middle of the forest until the castle. 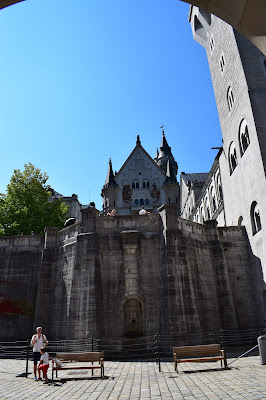 After a certain point, the debts for the castle were so high that the banks threatened to seize his property. Ludwig was declared insane and he was interned in Berg Palace where he died in 1886. 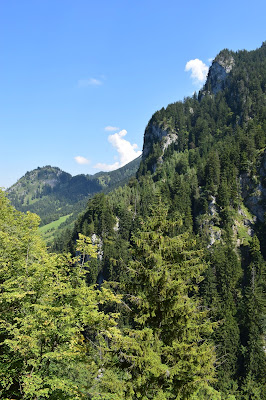 Ludwig wanted Neuschwanstein to be a 'sacred' place, with no outsider left to enter it. The local authorities, hopefully, had a different idea, and since August 1886, it is open to the public for visit and nowadays is considered one of the most visited and photographed places in the world. 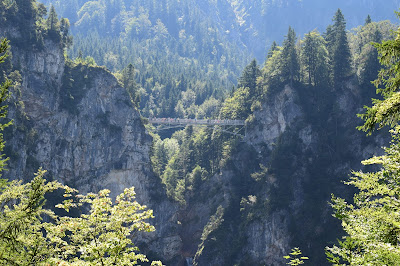 Taking pictures of the castle is quite difficult and if you wander from where all those perfect images of the castle with its arrow towers going up in the sky are taken, the answer is just a couple of walks away, from the Marienbrücke, which connects two sides of a gorge. Unfortunatelly, as for now, starting with 3rd of August, the bridge is closed for renovations. 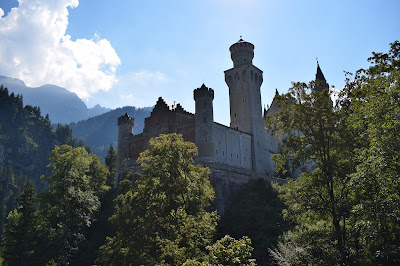 However, if you keep your eyes closed, there are many spots from where you can take some beautiful pictures, or beautiful enough to inspire anyone to follow your travel footsteps. 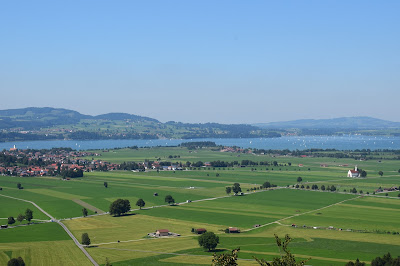 Despite all the rush, and waiting time and the sea of people you have to move through, a visit to the those castles is quite worth the effort. You will discover a different side of history, and you can admire some architecture that inspire artists, historians and entertainers as Walt Disney who used the image of Neuschwanstein for its castle representations. As for me, I am closing my eyes and trying think where I want to be the next summer. Do you have a guess? 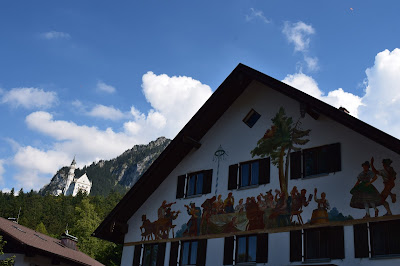 On the way back to Füssen, I threw one more curious eye to the surroundings, ready to start my journey back to Berlin and happy that I had finally the strength to embark on a journey in a completely new part of the world. See you soon, Bavaria!
Posted by Ilana WD at 1:03 AM