A sunny afternoon in Neuruppin

Brandenburg is frequently branded as a natural oasis and till now I realized that there it is more than a branding slogan. Wherever I've been in the last 2 years, when I intensively explored the area around Berlin I was pleasantly surprised by the green areas and the quiet presence of the humans in the middle of it.
As yesterday, the day of Victory for some residents of Neuruppin - the Soviet Army - was a free day - for religious reasons, anyway - I decided that I should explore Neuruppin.
It is situated one hour by train from Berlin and looking at the high concentrations of bikes it is a favourite location for campers and bike lovers. Especially in the North of Neuruppin medium and highly experienced bikers can discover the beautiful challenges of running through the canyons, brooks, near lakes and through the thick forest. Walking and Nordic tours are also possible. A regional zoo is welcoming the children in the valley of the river Kunsterspring, where 500 animals are spread across 16 hectares.
In case that you are a simpleton tourist, as I am, with a camera on the shoulder and the pleasure of walking on the streets, there are quite a lot of things to do for a couple of hours. Seconds away from the train station at the Rheinsberger Tor there is the Information Center offering leaflets and guidance. Here is also the meeting point for various tours in town. In case that you do not want to go with the bus, you can easily walk and in maximum 30 minutes you are already familiar with the town.
Culturally and historically speaking, Neuruppin is introduced as the birthplace of the poet and writer Theodor Fontane and (my favourite) Prussian architect K.F.Schinkel. It received the quality of town in 1256 and was burnt during the 1787 fire. The construction of new Ruppin - hence the 'Neuruppin' - was supported by the Prussian king Friedrich Wilhelm II whose statue is situated in the big square, close to the shopping and restaurants area. Neuruppin was also an important typography center whose achievements are presented by the small typography museum.
The shopping fans will not find here too many opportunities to spend their money, but there are many small traditional shops where you can find handmade products for soul, clothing and eating. As I visited everything was closed, except the restaurants, of different kinds and for different budgets. The Italian icecreams parlours looked delicious and so it was also Gerda's Cupcake where I had a delicious mango chai latte (the cupcakes are however the biggest temptation).
The most pleasant part of my trip to Neuruppin was when I discovered the promenade around Ruppiner lake, the largest one in Brandenburg, with 14 km length. Ships are coming and going each hour either part of tours around the lake or as transportation between different points around the area. I preferred to walk slowly around the lake, rest on a bank and look at the swans, before and after I went to see the biggest tourist attraction of Neuruppin: the Fontane Therme. A preferred choice by German honeymooners, retired persons and families with children, it has the advantage of being situated minutes away from Resort Mark Brandenburg and offering quite good prices (including compared to Berlin). The building made me think of a Japanese onsen, and inside everything is private, clean and smelling of massage oil. 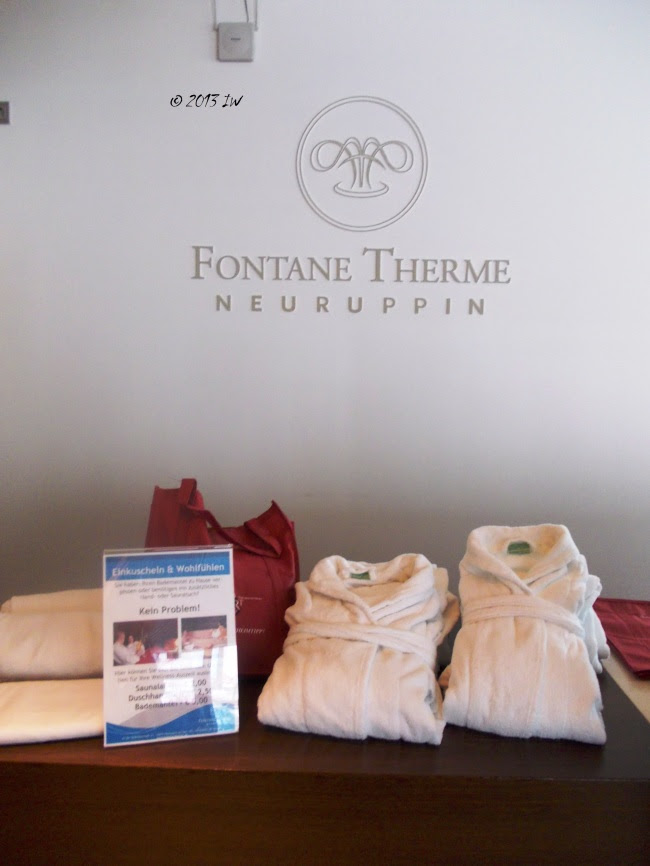 The families with children visiting Neuruppin will find not only many interesting looking parks, but also special menus available in most restaurants. It looks as a safe place, with friendly people, even though they may not speak English too often.
I planned to stay more, but after a couple of tours of the promenade and some documentation around, I decided that it may be enough as long as I was not interested to bike anywhere. My 18 Euro ticket was open so I took the advantage of the first train of the hour and returned back in the city with a lot of sun in my hair and enough energy for the next days, till the next trip. 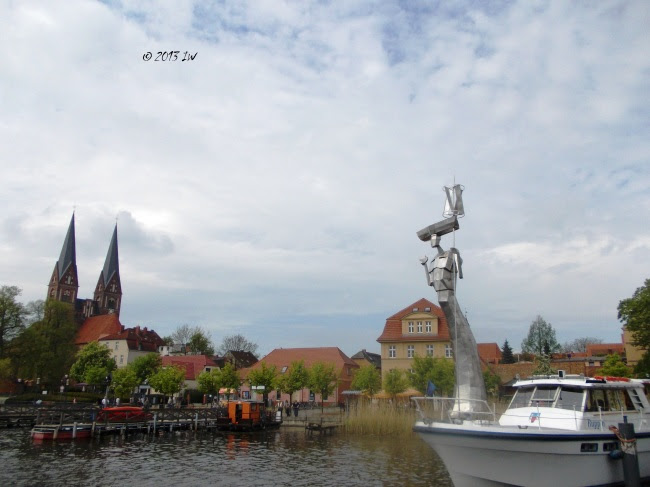 More pictures from my trip to Neuruppin: http://pinterest.com/ilanaontheroad/neuruppin/
Posted by Ilana WD at 1:12 AM