At the Babelsberg Film Studios 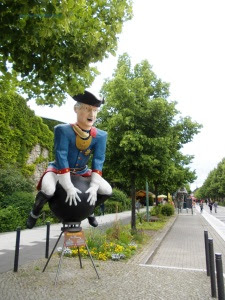 I wanted to visit the Babelsberg Film Studio for more than a year, but my schedule rarely fitted the plan of spending one full day in the ambiance of movies, both old and news. The last serious temptation was the last December, but the studios are closed for the public between November and mid-April, so needed to re-schedule. This time, I got ready in time, checked the schedule, succeeding to be I was one of the first visitors of the day, wondering on the alley bordered by mostly children movies characters. Baron Münchhausen was too busy creating a new adventurous story for saying 'hi', but many others were waiting for me on the Boulevard of Giants, including two huge Marx and Engels used as decorations for a German movie, or Maria's robot figure from Metropolis. 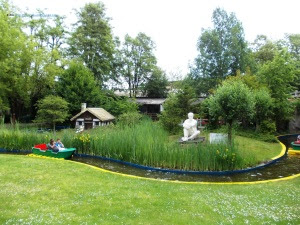 If you did not grow up in Germany, you might need sometimes guidance for understanding the story behind the thematic sections you are about to visit. Take, for instance, the Löwenzahn caravan, exhibited near the entrance, taken from the very popular German series with the same name from the 1980s. Or the little green island of Panama, where the visitor - no upper age limit for the visitors - is taking a boat tour while meeting the protagonists of Janosch's Dreamland stories or simply listening to the popular bear character snoring. The trip on the boat reminded me my all time beloved tour on a cup at Disneyland Paris. I had again the confirmation that I will never grow up and feeling good about that. 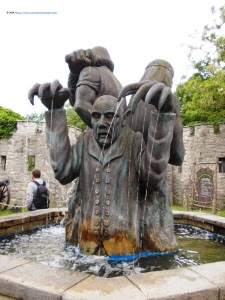 But beyond the natural German touch, the film studios always were international. Under the brand of UFA (Universal Film Agency) and DEFA (German Film Agency), here were created since 1911 many international products and famous movies, such as Fritz Lang's Metropolis, or the Blue Angel. Later on, productions as 'The Pianist', 'The Reader', 'Inglorious Basterds' or 'The Monuments Men' were hosted here. The park includes different thematic sections - Middle Age, with a lot of scary touch - Western etc., or simply created around famous movies filmed here. 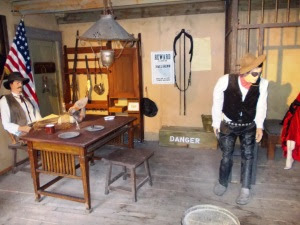 One of the least spectacular areas is the Western Street, that reminds of several thematic productions from the 1960s, such as 'The Sons of the Great Bear' or 'White Wolves'. Ambiance of Western movies was recreated, including a sheriff's office, a barber's shop, a bank or saloon. There is even a donkey that was lying a bit bored in his corner! For moderate action, one can pay 0.50 Euro and try his or her shooting skills. 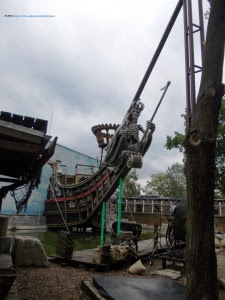 A popular interactive show is dedicated to the 2011 movie 'The Three Musketeers in 3D', but at the time of our visit, we only saw the decorations, waiting for more life and action later in the day. The interactive part is one of the strongest points of the studios. We've been twice to the Cosmic Kino, attending extraordinary 4D movies: we took our seats and fixed our special glasses, secured the seat bells and got into the roller coaster adventures for the next 15 minutes. The best way to fight my fear of heights, without climbing on the top of the world. Another adventure followed up at the Dome of Babelsberg, shooting  with plastic laser guns mummies and scary monsters in the worldwide first interactive XD-theatre. The round balloon where used previously for hosting a popular TV show by Sabine Christian and was moved from downtown Berlin after 22,000 hours of hard work. There might be long waiting times, especially if you arrive in the middle of the day, but it goes fast and it generally worth the waiting. 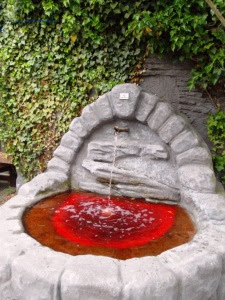 When we are not longing for multi-dimensional adventures, we walked the cobbled streets of the Medieval Town. From bloody water to tombs whose earth was moving while uttering special sounds, you have the special cocktails for successful nightmares for the next days. 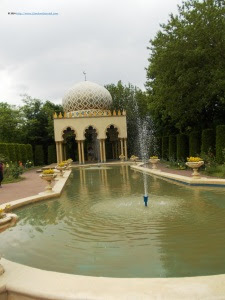 But there are also friendlier areas, such the Gardens of Little Mook, with pools, fountains and a Sultan's throne - occupied then by a guy reading his newspaper, not too much worried that there might be people looking for a selfie on the same throne, for example - original decorations from the classical movie. 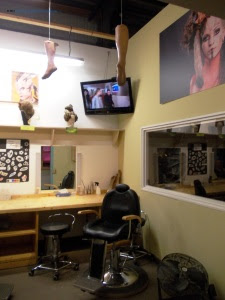 It was plenty of school children visiting, and I could not stop observing some scary scars on the faces or arms of the little kids, wondering how wild they went while visiting the park or even before. However, when you are in the world of movies, expect the imagination to be stronger than the reality. The little ones went in fact before me at the 'Dreamworkers' Atelier, where painters or make-up designers are able to completely modify your appearance. 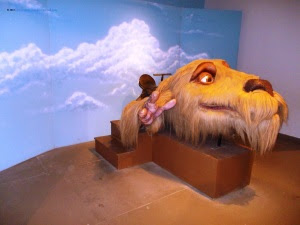 Near costumes and originally looking paintings, I met some of the characters of one of my favourite story back in time: the Neverending Story - which from now on, is travel. 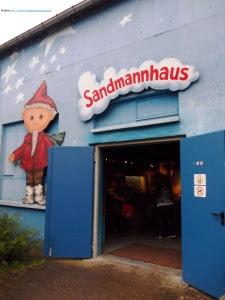 Sandmann is the icon of the children who grew up in the former GDR - Babelsberg was part of the national pride of the newly created German Democratic Republic anyway. The show featuring little dwarf created in 1959 reached a popularity of 1,5 million daily viewers, in a world without Internet and with relatively limited access to the media - censorship was a popular hobby of the political elites at the time. The section dedicated to Sandmann is not too exciting, focused more on the history and evolution of the character, with snapshots from different successful episodes. 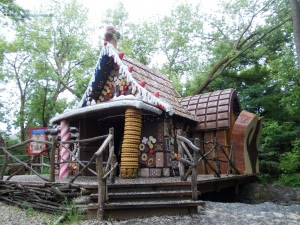 After many hours of checking action movies or spending long minutes wandering what's going on, this Witch's Cottage from Hansel and Gretel made my hungry. Don't expect to be treated with anything delicious inside, as there is only a TV presenting images from the movie. There is the original set from the German movie adaptation of the famous story. The remake was made in 2012 for the TV station rbb. This tasty looking house was used during the shooting of an outdoor scene located very close to Potsdam. 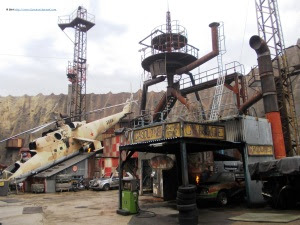 When I took my media accreditation for Babelsberg, I was told that I definitely watch the stuntshow in Volcano Arena, that takes place at specific hours. We waited till 14.00 o'clock and despite the heavy rain, we decided to go, encouraged by the fact that there is a huge covered arena where one can easily stay away from the drops. The show lasts for around 45 minutes, is packed with action that includes car chases, fire stunts and fight scenes and many special effects. The amphitheatre was built in 1998 with around 120 tones of lava brought from the Eiffel Mountains in Germany. The setting was used for the SF Mad Max Trilogy, starring Mel Gibson and Tina Turner. It's adrenaline fuelling, although a big violent, but I found the fight scenes a bit ridiculous and not necessarily very 'real'. 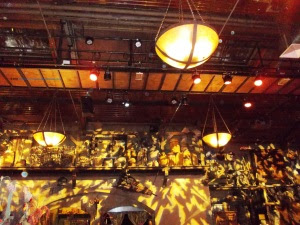 Inside the Film Studios, there is also a thematic restaurant, 'Prince Valiant'. Situated close to the medieval quarter, it features the world of Arthur and its cavaliers: there is a round table, and the meals in the menu have interesting names such as the lactose free Lancelot pasta. When we arrived, it was ongoing a show with trained animals - a dog and an eagle - and the place was full of people. However, after waiting a while to be served with something, we gave up and continued the journey without the food tasting part. 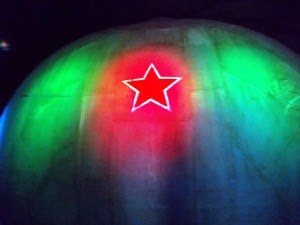 The last attraction visited was the original 'Boomer' submarine, from the 1997 film 'Hostile Waters', with Martin Sheen and Rutger Hauer. Set in the complicated Cold War context the movie has  nuclear balistic adventures. A guided German tour of the submarine was provided, explaining the technicalities of the machine, as well as the details of the movie. Interesting, but not as exciting as our last 4D adventure at Cosmic Kino: a roller coaster adventure set on the heights of the Great Wall of China.
Our world nowadays is more creative than it used to be centuries ago. When we might feel that things are going too unexpectedly, one day in the film studios will give you hope that things can go pleasantly wild from time to time.
For more insights from Babelsberg Film Studios, have a look at the dedicated Pinterest board too: http://www.pinterest.com/ilanaontheroad/filmspark-babelsberg-brandenburg/
Posted by Ilana WD at 2:01 AM

Email ThisBlogThis!Share to TwitterShare to FacebookShare to Pinterest
Labels: 100 places to see in germany, babelsberg film studios, family travel, one day trips from berlin, visit germany, visit postdam, what to do potsdam