Bielefeld on the unbeaten path 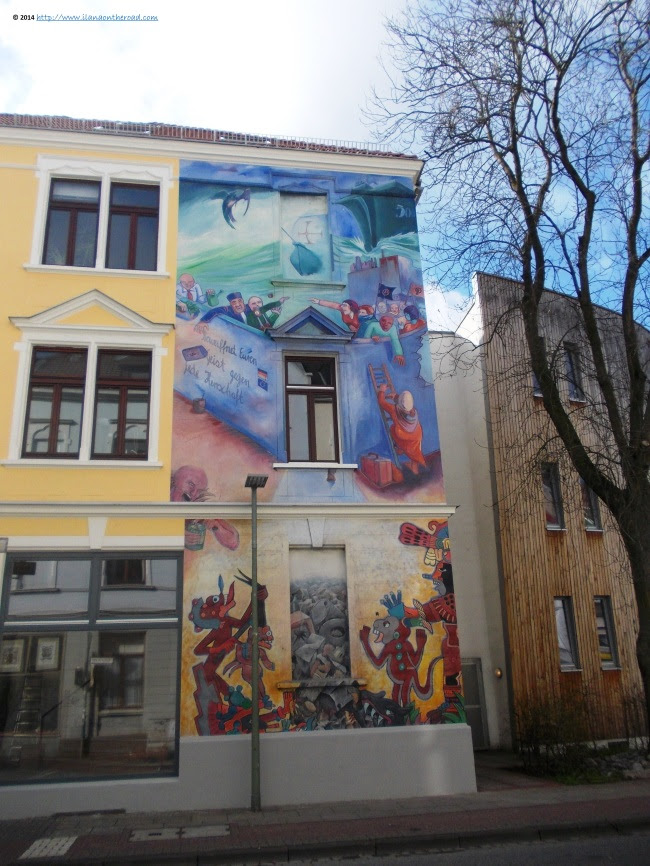 Before visiting Bielefeld, a couple of weeks ago, all I knew about the city was that it's 800-year old - thanks to some presentations I attended at the ITB earlier in the year- and that is home of the revolutionary baking company Dr. Oetker. With a notebook full of suggestions and my camera, I decided to discover the city on my own, on a sunny day at the beginning of spring. Early in the morning, the streets were empty, leaving me the time to look patiently for hints about the past and present.
From the central station, I chose to walk - tram, metro and buses are regularly connecting different sides of the city - having a look at the mix of architecture and colourful graffiti bringing life to the quiet sober buildings. 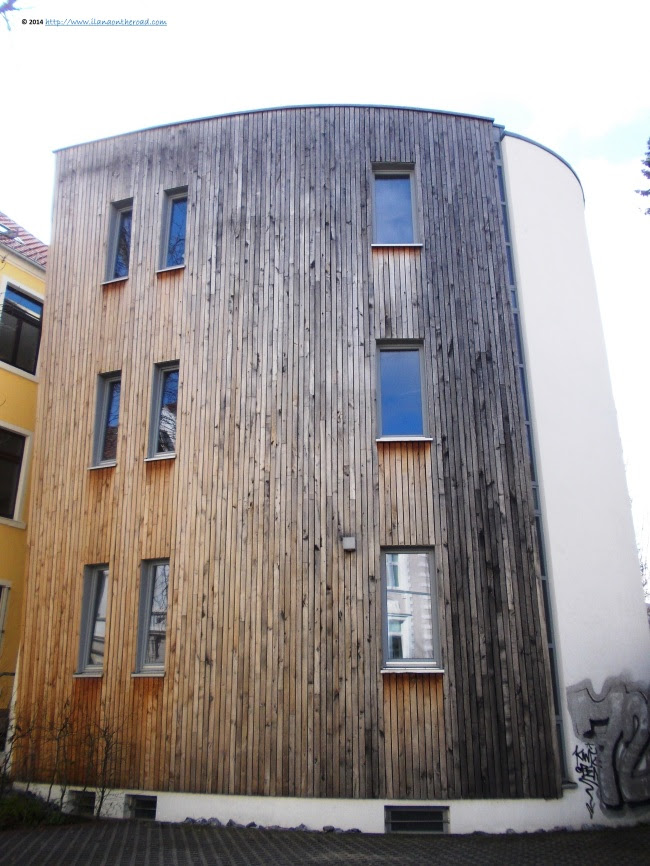 The mixture between very modern architectural conceptions superposed to old structures is predominant in the case of many houses or office buildings. As many other cities in Germany, Bielefeld was seriously damaged during the WWII bombings, but easily found a new post-war identity, adding to the big ready made baking factory the university center, attracting young minds from all over the world and Germany.
From the central station, I passed by the Stadthalle, the city's indoor arena, and took the August Bebel street till the Jahnplatz, the most important shopping spree. Shops and bars offering flavours from the Balkans, Egypt or Asia complimented the eclectic architecture. 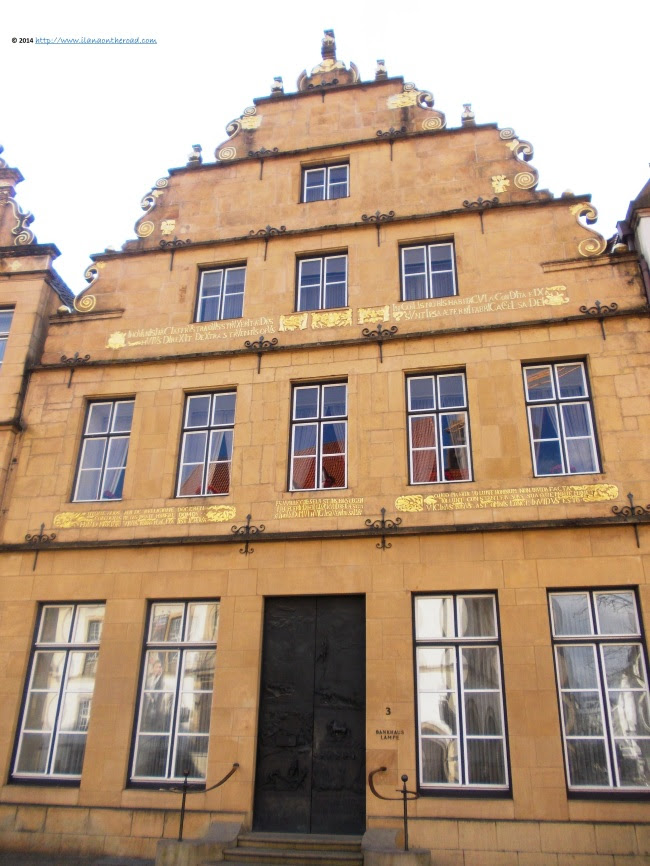 Even though there are not too many tourist directions, I succeed to reach the Alternmarkt/the old square, where used to be the old city hall till the 19th century. Cruewell House, with its golden letters written on the yellowish stone, is facing the building of the theatre. The house was built in 1530 in the old Gothic style as a merchant house, being later used as a tobacco factory. As most of the central area, it was rebuilt completely after the war. 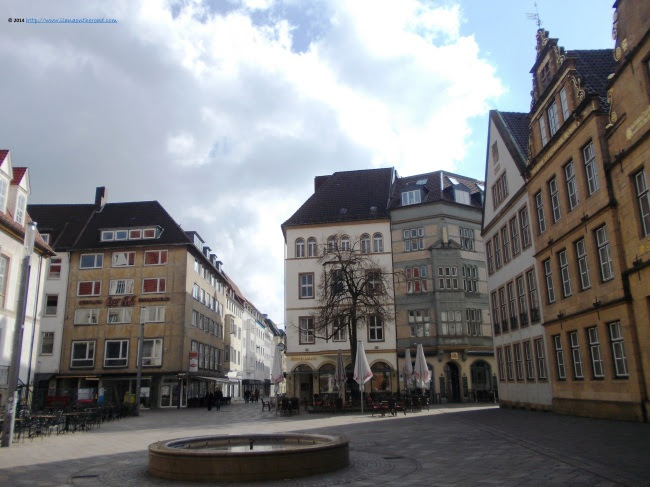 In the old historical square, the coffees are getting ready to welcome the guests, many bold enough to set the chairs outside. 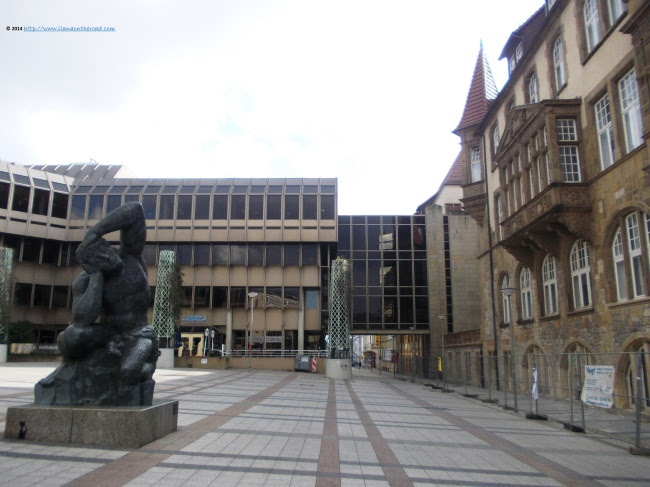 The more I walk, the more the city reveals itself. You need patience deem to the 800 years of history. The next stop is the new city hall, neighbouring the art nouveau building of the theatre. 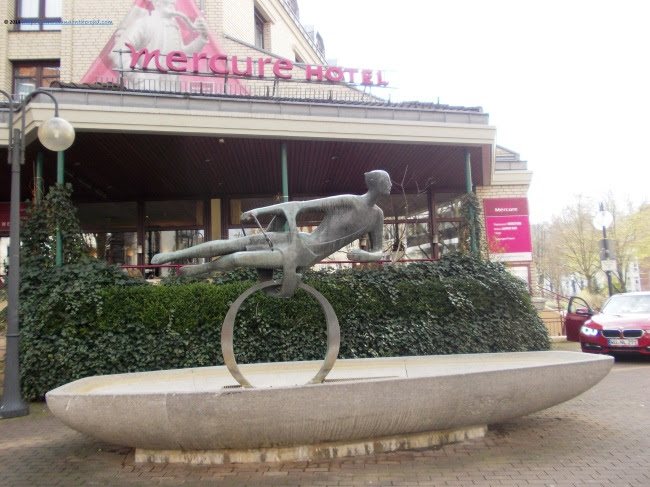 Art is discretely insinuating in unexpected places, similarly with the creative pieces of architecture. 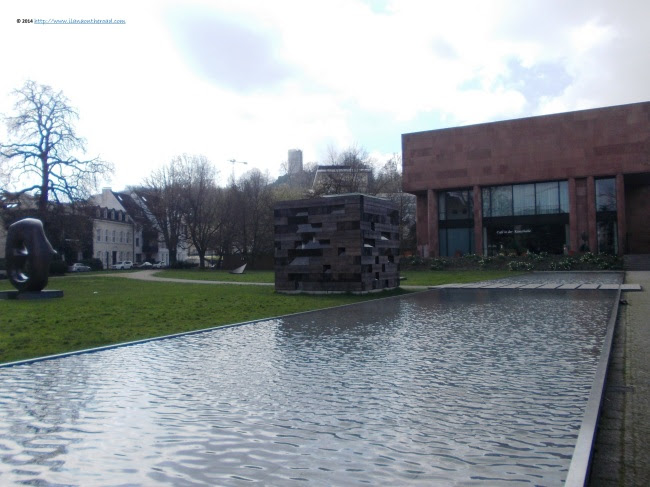 At 11 o'clock, I am ready to visit Kunsthalle, where an exhibition about Expressionism and abstract art, featured through the works of local artists is opening. The museum is surrounded by different works of art in different styles, from a Japanese wooden house to copies of Rodin's Thinker in the front of the main entrance. Big groups of local visitors are already at the museum, following the extensive explanations of the guided tours. The exhibition is interesting not only due to the quality of works, but also because revealing episodes of the German history of arts, such as Westphalian Expressionism or the Stuttgart Avantgarde. 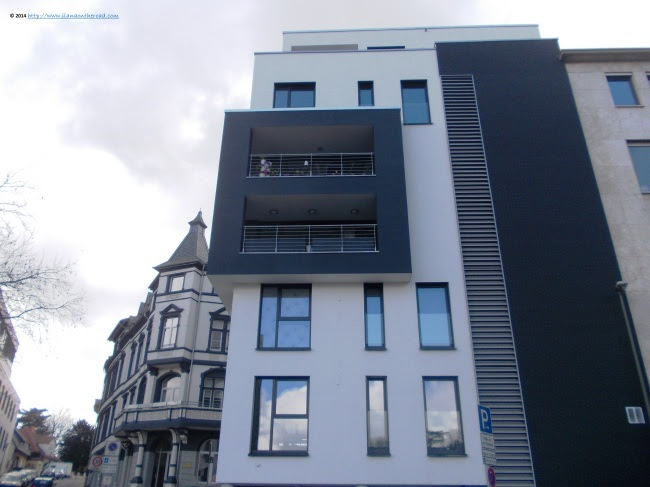 Enriched with a new aesthetic experience and with more historical details, I go slowly direction Sparrenburg Castle, not without noticing the permanently changing architectural landscape. 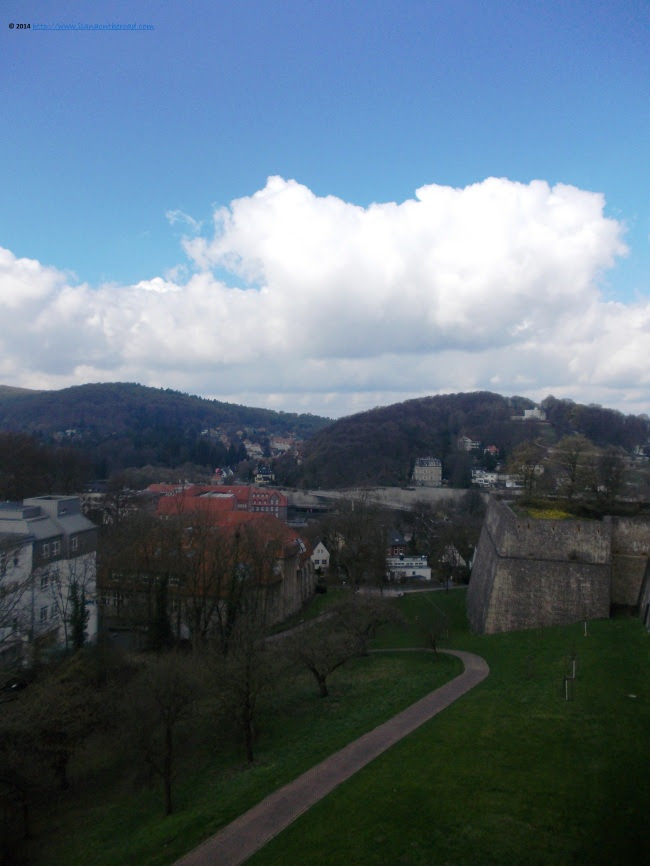 The hiking till the hills is not that easy, and I admire the resilience of the joggers running to the top. The castle was build in the mid 13th century as a display of local administrative power of the Ravensberg rulers of the area. Renaissance and early Gothic adages were signs of adaptations of the military needs of the centuries. During WWII, it was used as a military camp and anti-aircraft basis 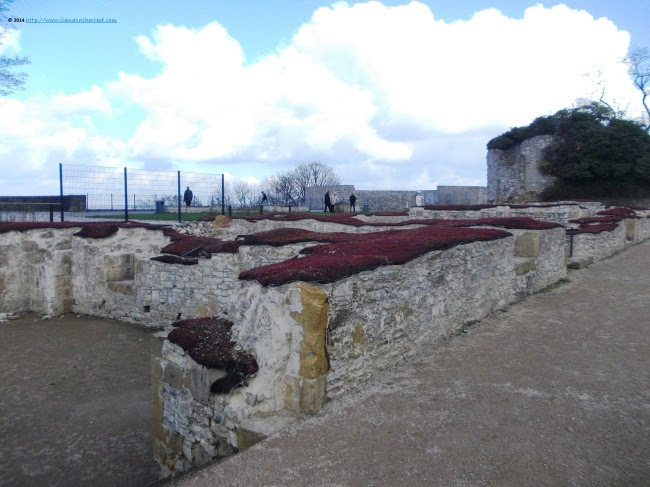 The castle has a 300-meter system of underground that can be visited from April to October. Here is also held a medieval festival. The restaurant that is hosted near the former dungeon, offers Portuguese delicacies. 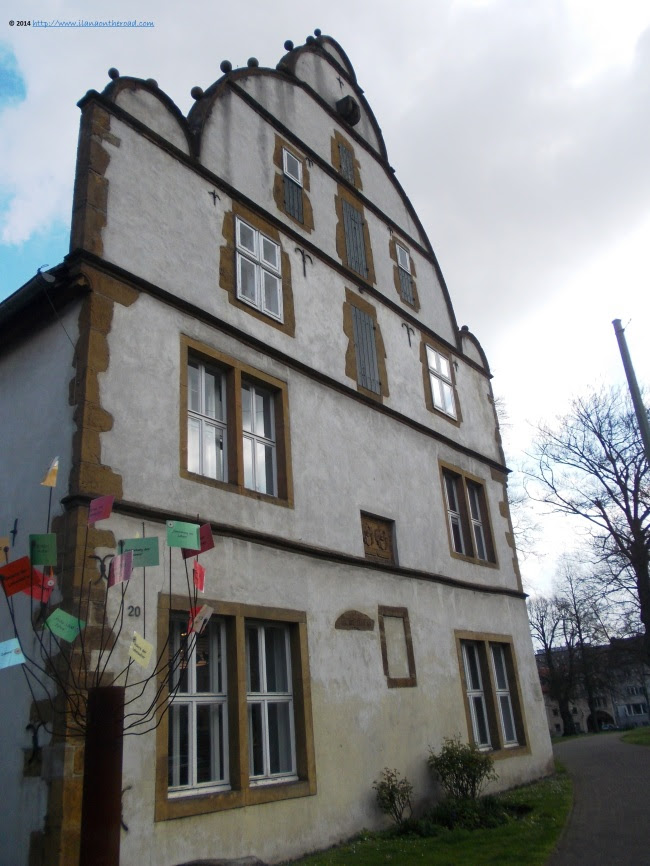 Back in the city, I pay a short visit to the Spiegelhof, another merchant house turned into a museum of natural history. A couple of minutes away is the Bielefeld Kunstverein, where during my visit were displayed interesting installations of young artists. 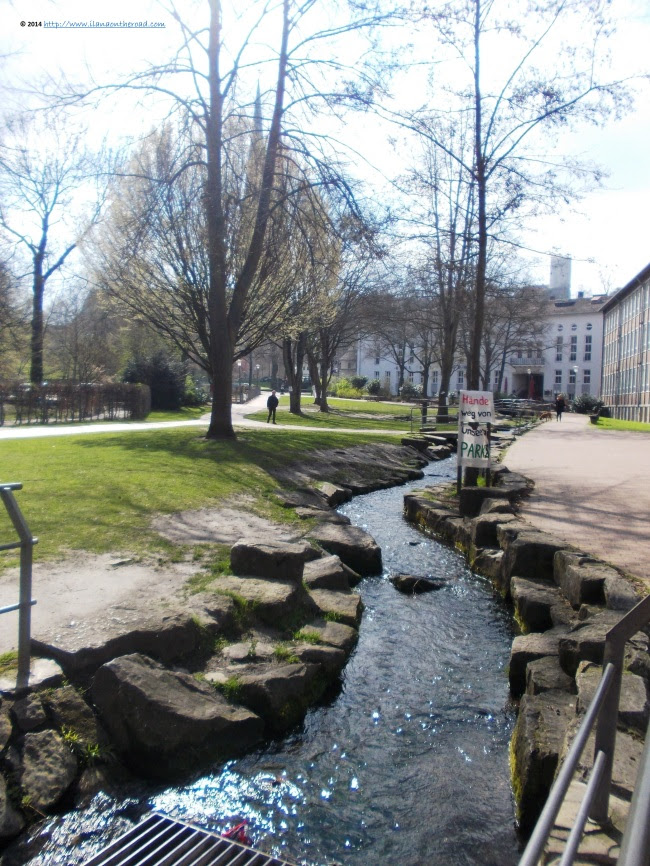 The weather is beautiful enough to encourage me to do more walks, as I did in the Park of Human Rights. 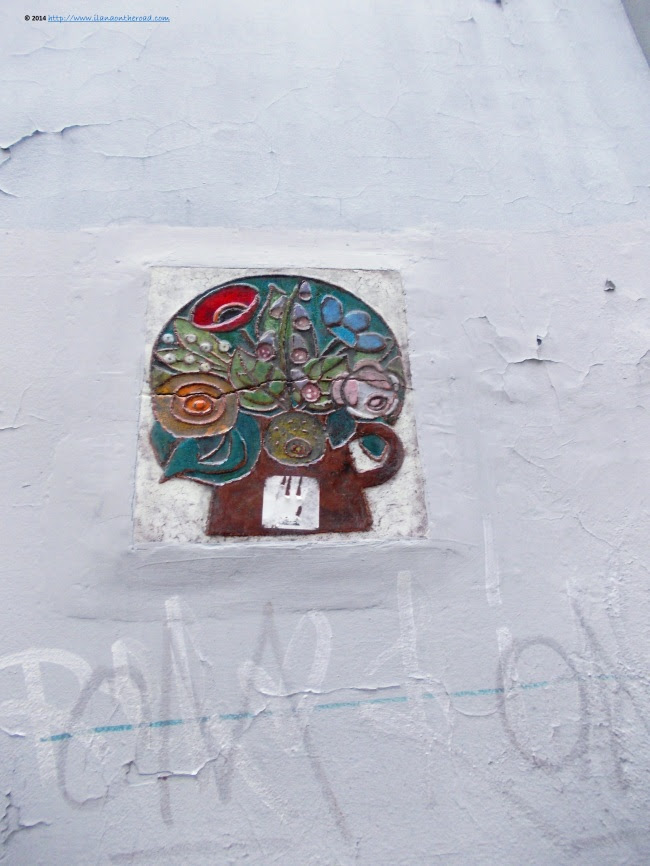 With so many new artistic ideas received in the last hours, I developed an additional sensitivity for beautiful corners. Bielefeld is there to impress me with colourful tiles inserted on the walls of otherwise common buildings. 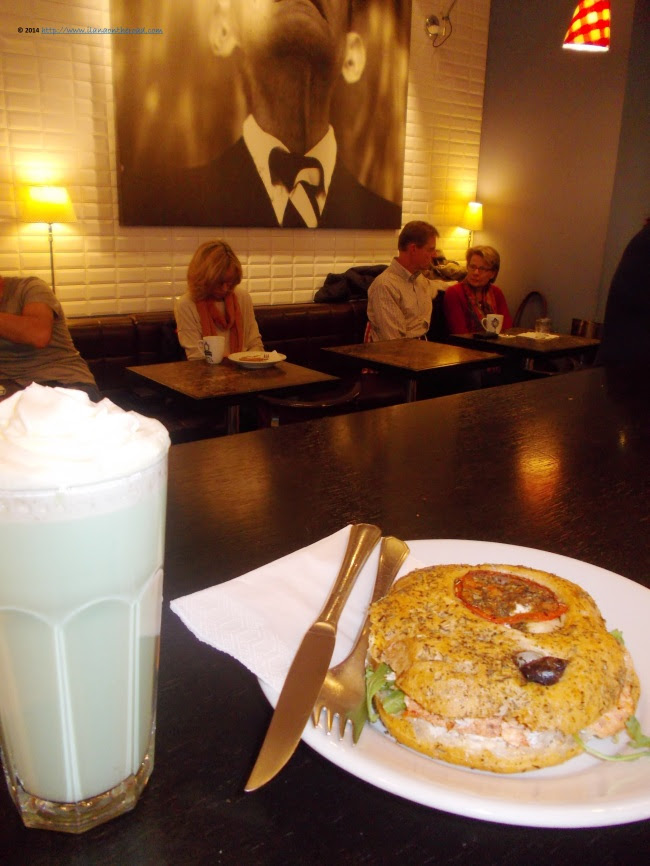 I am almost half-way through my travel schedule in Bielefeld and I indulge in a lunch break. Thumel 1504 looks young and tempting and I give it a try for a chai latte and a veggie sandwich. Maybe the service is too long, but I am trying to use my time looking at the other customers and browsing some colourful German publications. I chose the old way, as I can also rent an iPad to check the latest news and updates. 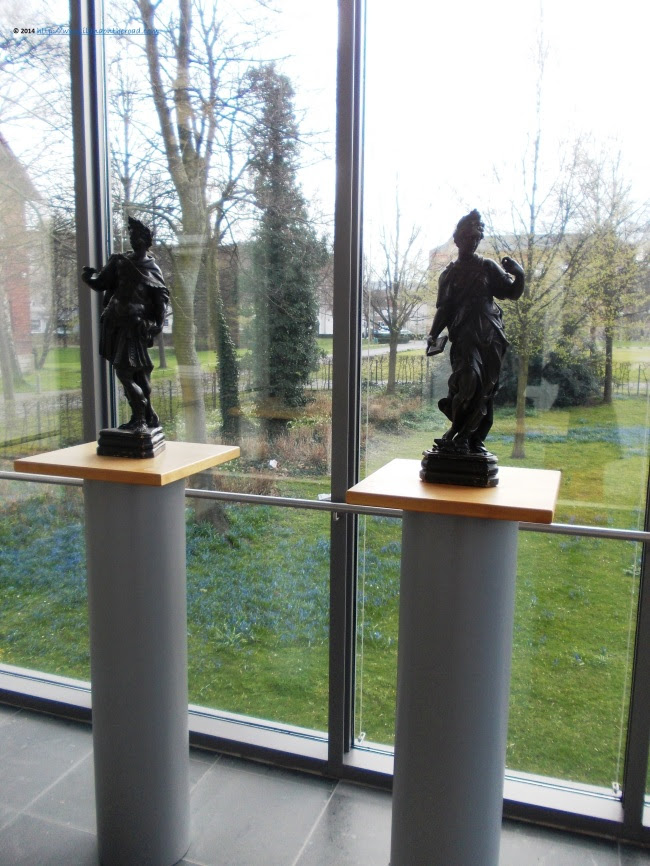 For my next destination, I should go back to Jahn Square and take a bus till the Ravensberger Park. The area has an old Spinnerei turned into a home theatre where movies do not have German translation, but also two nice exhibition spaces part of the Huelsmann Museum that I visit. One presents an interesting exhibition about the musical culture in Berlin in the 1920s and the other has as main focus the local history and culture. 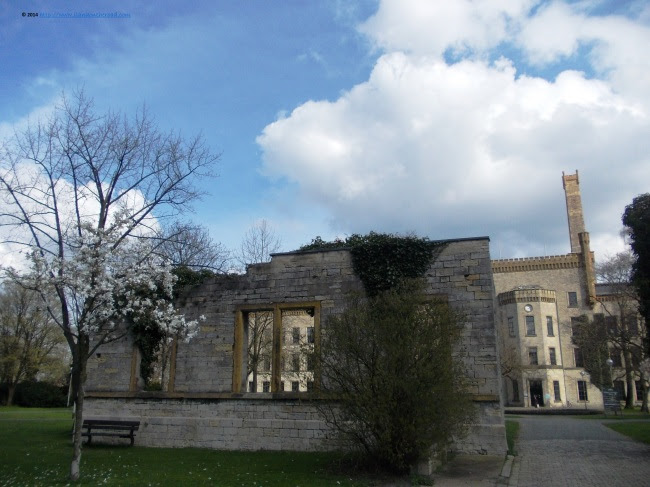 The park itself, looks like a perfect Romantic make-up: old ruins covered by vegetation, with banks and cobblestoned alleys. The blooming spring brings a certain elegance to the old stones. 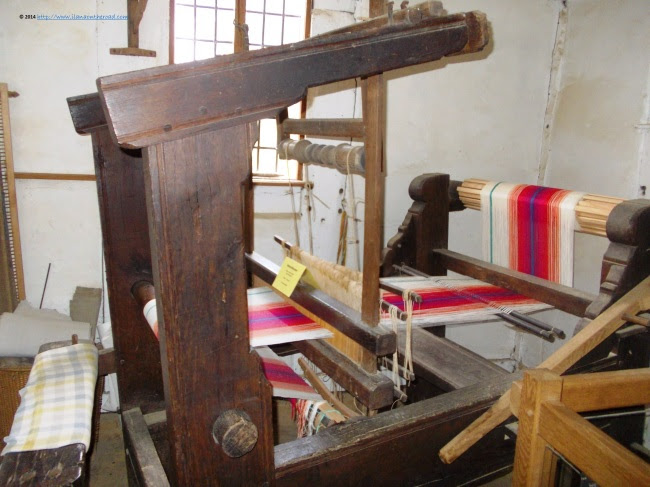 It is about time to go again, this time in the opposite direction. After almost 20 years of waiting, I take a bus crowded with humans and different breads of dogs till the Museum of the Peasant House/Bauernhausmuseum. A kind lady describes to be the peasant's life in Bielefeld: the local artworks till the daily routine and descriptions of the rooms of a peasant household. 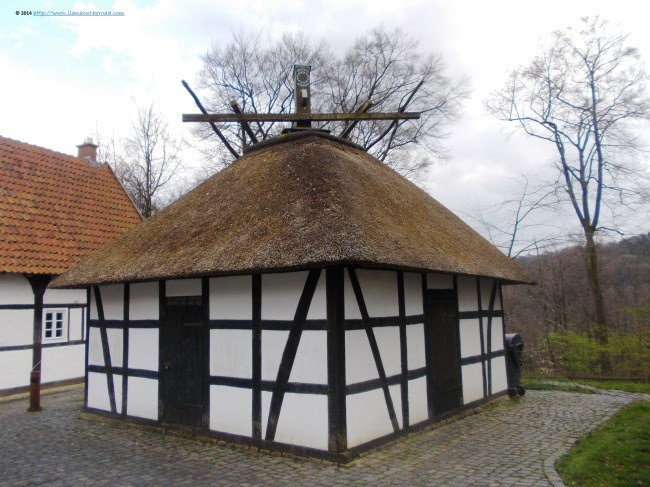 Very often the peasants were living together with the animals, especially during the winter time, and most rooms were used as deposits for food during the long cold winters. 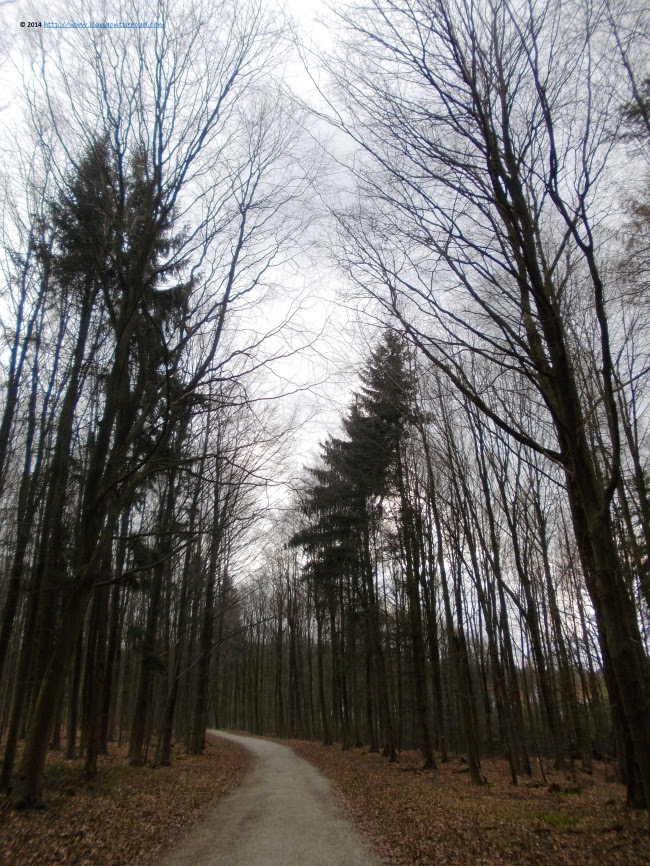 Enough learning for now, I am happy for some new hiking experiences, in the Teutoburg Forest. Together with me, many locals, with at least two dogs in leach. Actually in some parts it might look very busy, but I still can find intuitively some shortcuts where it's only me and the beautiful nature, not fully awake after the winter. 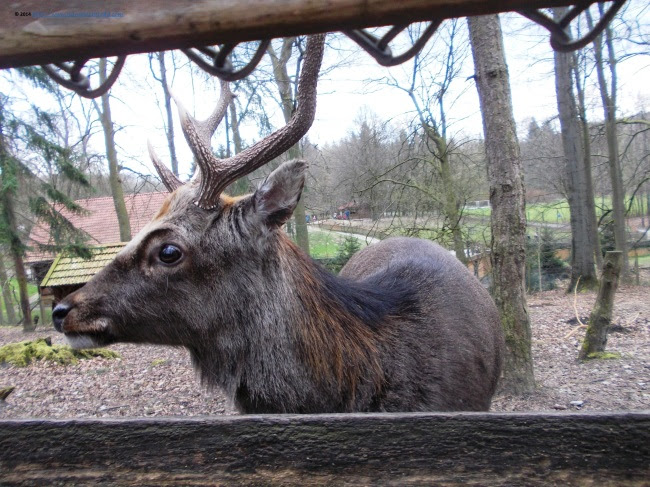 Through the forest, I enter the Tierpark, where families with children were enjoying a free entrance Sunday. The park is a mixture of domestic and local wild animals, enjoying quite a big amount of space and relatively used with curious visitors. 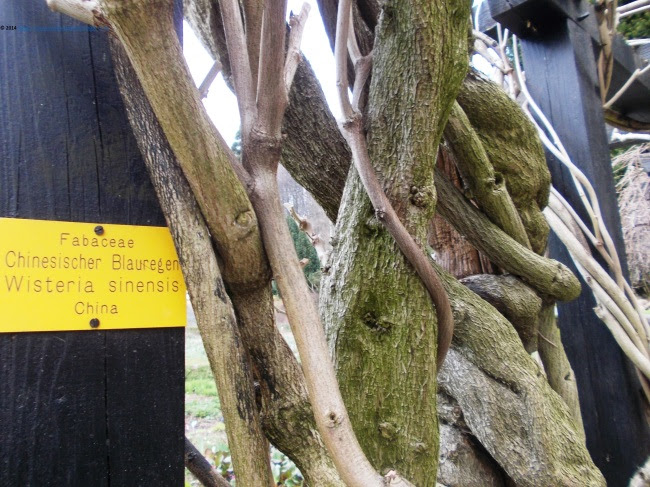 Despite some accidental drops of water, the weather is on my side and I decide to walk more till the Botanical Gardens, where I arrive at the end of a guided tour. The garden is relatively small, but the flowers are in full bloom and I enjoy spending some time around old trees and young seasonal flowers. 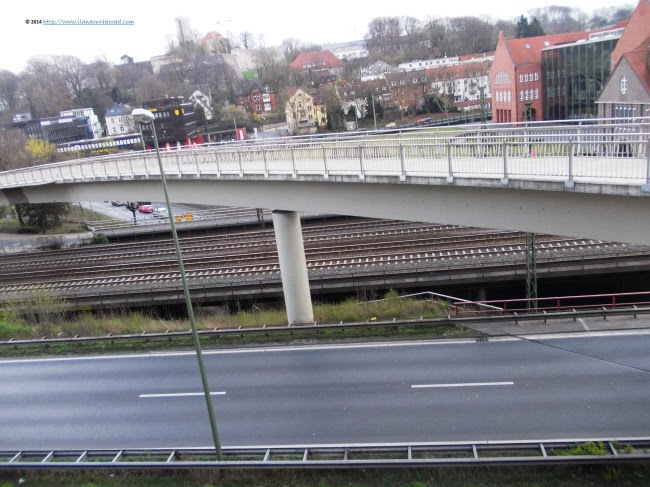 After long wanderings, I decide to return closer to the civilized center of Bielefeld, passing around complicated highways-roads system, displaying views of the city, a mosaic of old and new fragments of history. 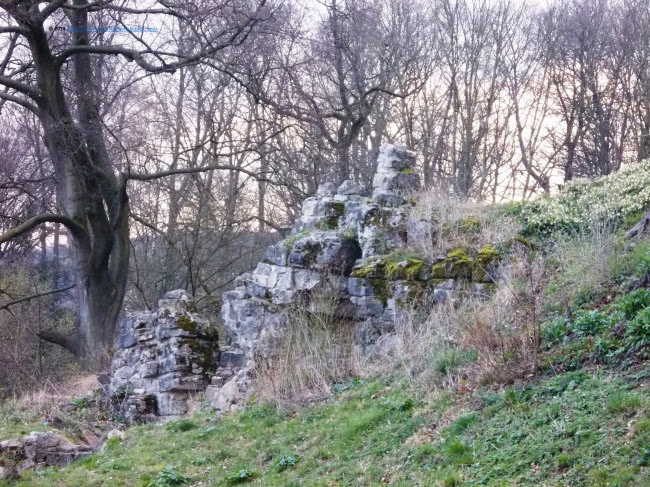 Before a new stop, a new temptation I can't resist: Winzer'sche Garten, created around a former villa from the 19th century, destroyed during the war and turned into a local archaeological and natural park project. 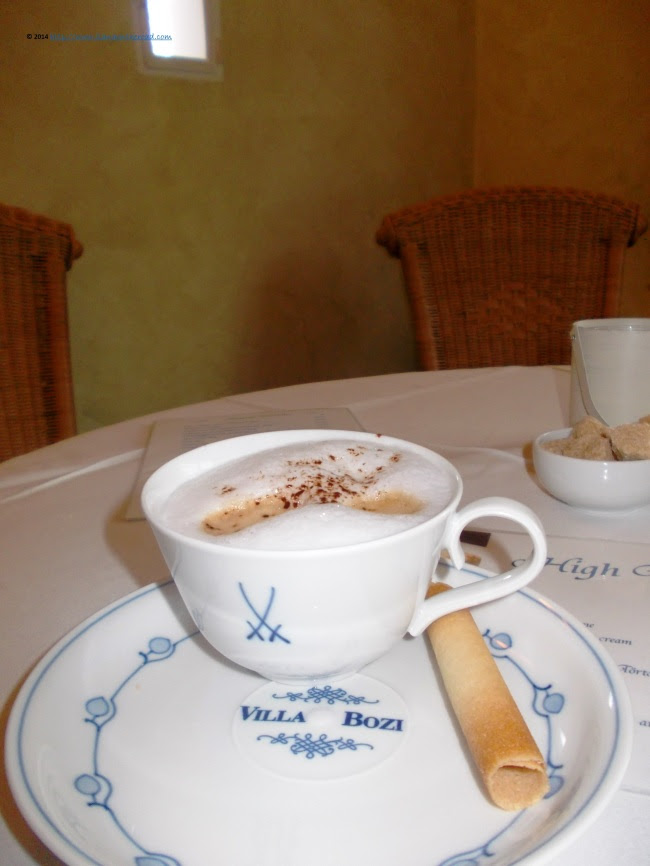 On the way back to the center, I spotted an elegant building displaying a coffee and cake menu: Villa Bozi. Curious to discover some unexpected places, I dare to enter and I order a cappuccino, brought to me in elegant Meissen porcelain cups. The Villa also offers various interior design and stylish souvenirs, and I regret to discover it shortly before the close. 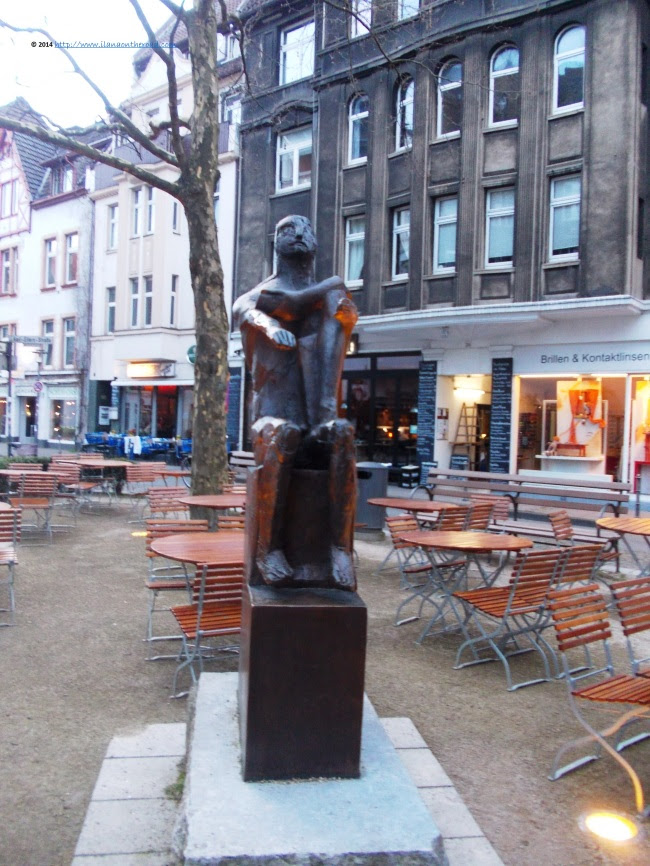 It's getting late and I have another thing to do while in Bielefeld: meeting my Swedish friend that spent here six months as a resident scholar at the University. He introduces me shortly to the local attractions and the student life, including a conference about travel in the 19th century that apparently enjoyed an extensive media coverage. We walk slowly the streets near Jahn square, especially the area made by the meeting between Karl Erkers Street, Mercator Street and Arndstreet. It is called by the locals the 'Bermuda's triangle' and you can find there all the best cocktails, bars and restaurants in town. As usual, meeting people living in a city reveals many well hidden secrets to the hasty tourist.
While I am heading back to the train station dominated by some advertising of Dr. Oetker factory, I count the new things I've learned about the city, and I decide to take more such trips that brings me closer to a different reality. Good things happen to those who wait and get patience to walk a lot the unbeaten path.

For more images and impressions from Bielefeld, check my dedicated Pinterest board: http://www.pinterest.com/ilanaontheroad/bielefeld/

Email ThisBlogThis!Share to TwitterShare to FacebookShare to Pinterest
Labels: 100 places to see in germany, bielefeld travel tips, visit bielefeld, visit germany, what to do bielefeld