The colours of the autumn in Bayreuth 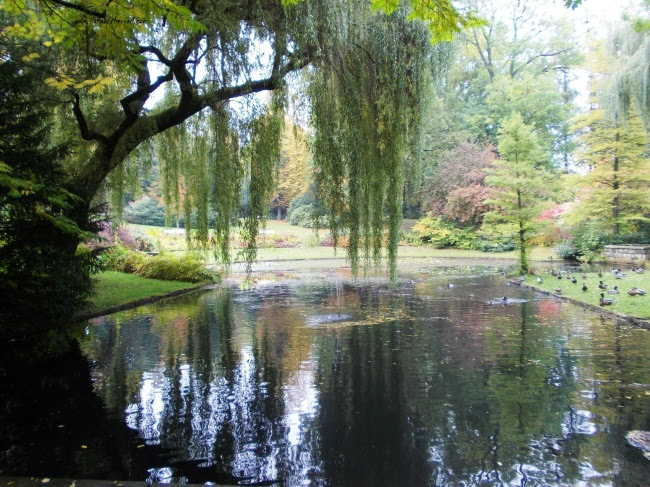 I am not at all passionate about (any kind of) opera, and my knowledge is limited to some experiences as a child being brought to listen to some Verdi. I don't have any curiosity to listen to Wagner. But I've found challenging for my project '100 Places to See in Germany' to discover the branding ideas that puts the city on the map of European culture. I was not disappointed in my researches: As expected, everything is prepared in detail and the steps of the eventually confused visitors are always brought to the right 'Wagnerian' destination. All you have to do is to watch the red circles with a stylish 'W' in the middle.
As I already said, I do not listen to Wagner, but I know something about his works and life. The names of his works and members of the family, written in Gotish characters, were assigned to streets and drugstores (Parsifal Apotheke) and restaurants. My first stop of the trip was to the Festspiele, the place where every year cultural and political VIPs want to be seen on the red carpet for the opening of the international opera festival. Together with other groups of tourists, I made a tour around the building, disappointed that the next tour was too late for allowing me to see with my own eyes what is considered the biggest Opera stage in the world. From outside, everything looks modest and if not the good positioning - on a hill that made the building seen from afar - I would not have been too curious to run around 20 minutes from the train Central Station to see it. Near Festpiele, an exhibition 'Wagner and the Jews', outlining the careers of the Jews associated with the works of the composer some of them openly anti-Semites. Most of them ended up leaving Germany or murdered in the concentration camps.
The colours of the (still) green autumn brought more life into the landscape and I was happy to end up my opera exploration with a long walk in the park nearby. I took a longer walk till the center of the city, observing the grey architecture, punctured only by the colourful flower pots and some windows stylish decorations. 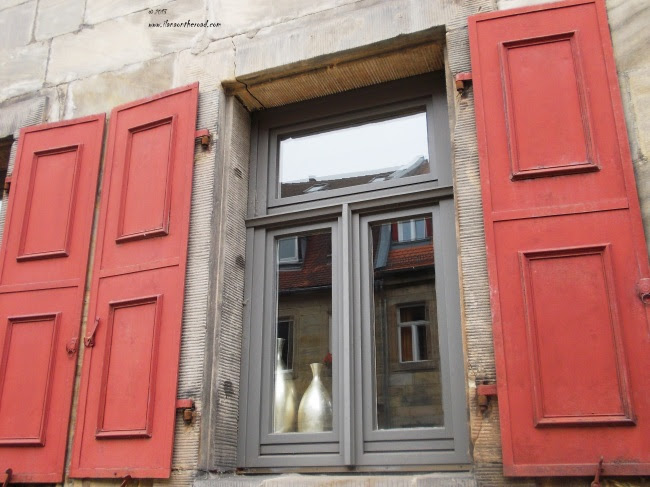 The main square was overcrowded with an exhibition of old cars. Many shops were open and people were busy shopping. Besides the many flowers and green corners not necessarily recommended in any of the guidebooks I've read while preparing the trip, I also discovered many chocolate and tea shops. From one, I brought home a Mexican green tea, fully flavoured. I did not see too many German restaurants, but many Asian, Turkish and even Mexican ones. 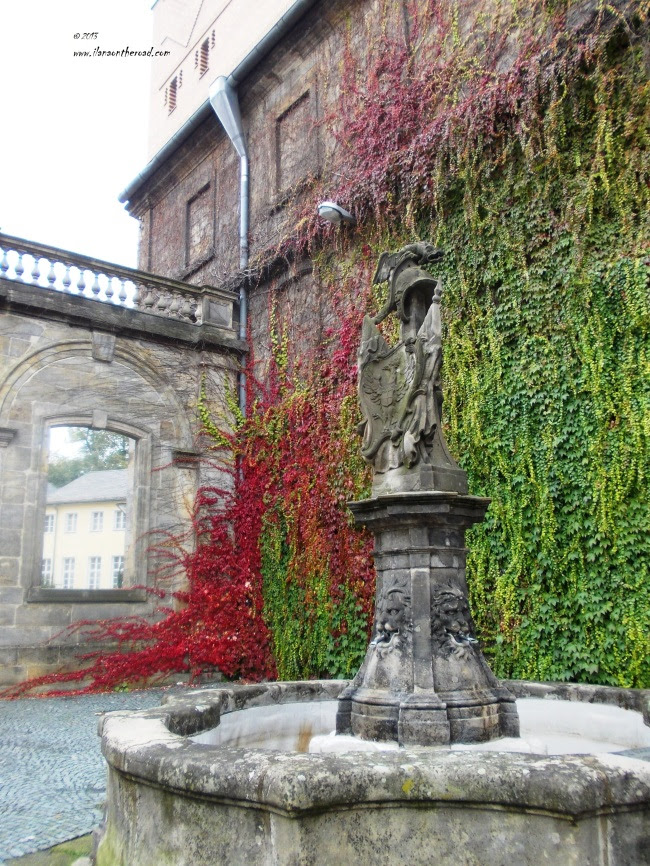 Another personality associated with Bayreuth is Jean Paul. Originally Johann Paul Friedrich Richter, he chose this city as his residence and source of inspiration for some of his works. At the time, he was considered one of the most creative and imaginative writers in Upper Franconia. Corners of the city are described in many of his works that I would be curious to read one day. A square dominated by his statue bears his name. I went to the small museum dedicated to his work: I got the details about him in the most accessible way; the information are set up in a smart and simple way, without too much emphasis and sophistication. 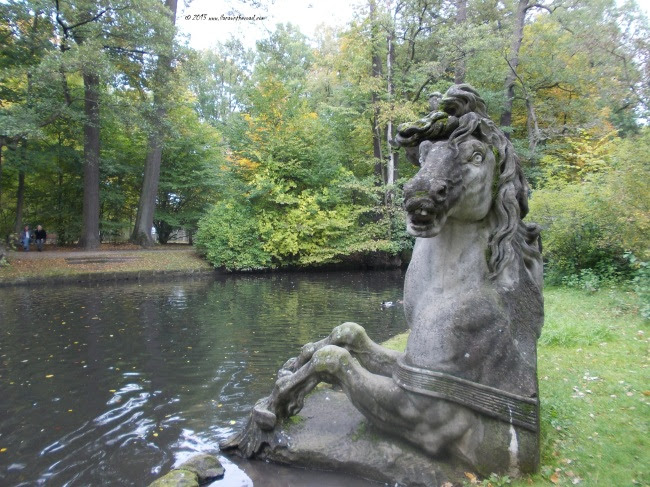 The best place I liked in Bayreuth was the Neues Schloss, the former residence of the Margrave of Brandenburg-Bayreuth. Before entering the big park populated with mythological figures I had the chance of a mini-tour of the castle, where I saw not only an impressive collection of paintings, mostly landscapes and works of Dutch masters, but also an old bathtube and a small cave made of small and big shells used as a relaxation space. The main plans of the castle, especially the rococo decorations, are the result of the inspiration of Wilhelmine of Prussia, the older sister of Frederick the Great married with Frederick of Hohenzollern, the margrave of Brandenburg-Bayreuth. She is the one who succeeded to turn Bayreuth into an intellectual capital city of the empire. Voltaire was one of her frequent visitors at the castle that was designed having in mind the glorious Versailles. 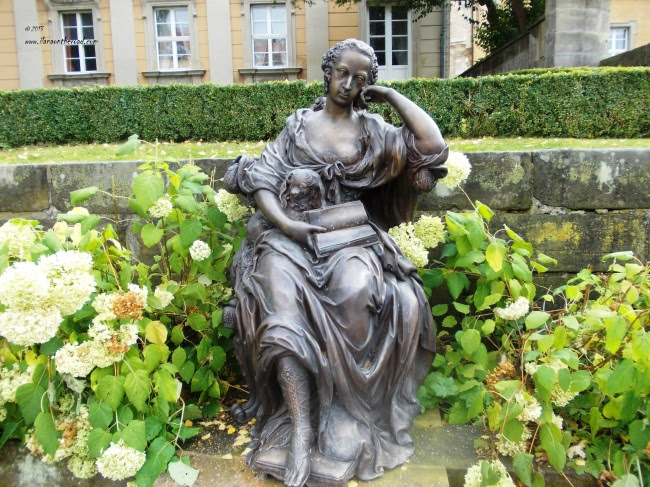 The visit at the castle made me long for more arts and I was given the opportunity to encourage some temptations by visiting the Museum of Contemporary Art, situated in the old 15th century townhall building. I enjoyed some modern arts from the collection of Patrick Ireland/Brian O'Doherty featuring the American art after 1945. A bonus, an exhibition about the history of tobacco, a habit I gave up a couple of years ago, but still interested to explore from a sociological point of view.
I spent my last 2 hours in Bayreuth continuing the exploration of the local tea shops and observing the busy locals. A colourful autumn sky and the smell of wet leaves made the best of my trip. Such corners of nature are more genuine and easy to fell in love with than a complicated opera.
For more visual insights about Bayreuth, check my Pinterest board: http://www.pinterest.com/ilanaontheroad/bayreuth/pins/
This trip was kindly supported by MeinFernbus, but the opinions are as usual, my own.
Posted by Ilana WD at 12:56 AM