A Sunday in the colourful city of Wernigerode 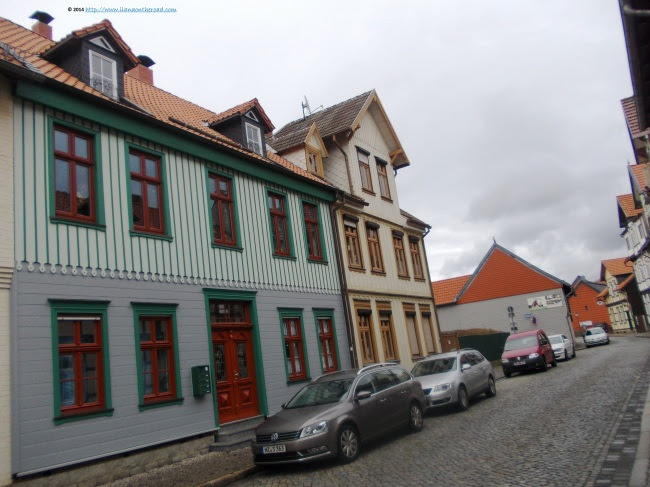 I am always happy to return to the Harz mountains, and I still have on my list a lot of places I haven't been too yet. This time, I asked one of my friends who went often during the summer for a recommendation, and enthusiastically they mentioned Wernigerode. This was the answer I secretly expected, as I often read about the specific colourful architecture and the various festivals organized there, among which a Chocolate Festival in October.
Shortly upon arrival, the eyes cannot have enough of the colours and the camera is moving slowly. I do recognize the usual timbered style of the houses in Harz, but the colours and patterns seem to be the result of a competition for the most beautiful appearance. Some of them are lovely enough to make me smile. It is a joyous ambiance, despite the grey snowless winter (at the time). 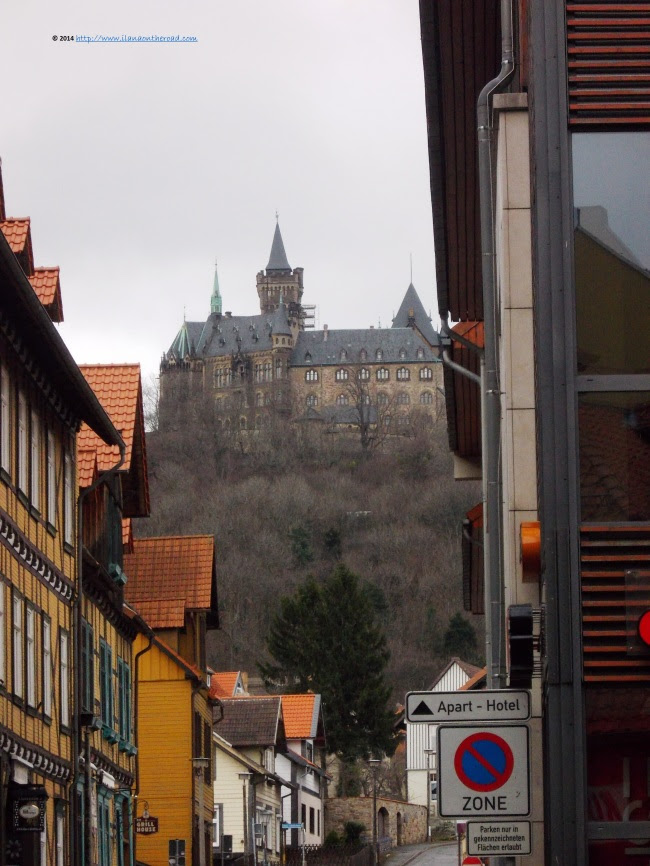 We cannot have enough to walk the streets for discovering more special houses. We go Bahnhofstrasse, turn to Bartelstrasse for more colourful architecture, and after we spend some long minutes on Ringstrasse and Breitestrasse. Our main destination is the castle whose majestic presence is overseeing the small streets. Mini trains are touring around the city till the castle. Otherwise, chariots are lengthily transportations for the tourists and offer a slow motion view over the old city. We still have enough energy and want to discover the city house by house on foot. Unusually for this time of the week in Germany, most shops are open. There is not too much place for modern locations, most of them being old houses, belonging to middle class merchants, turned into comfy locations for the 21st customer. 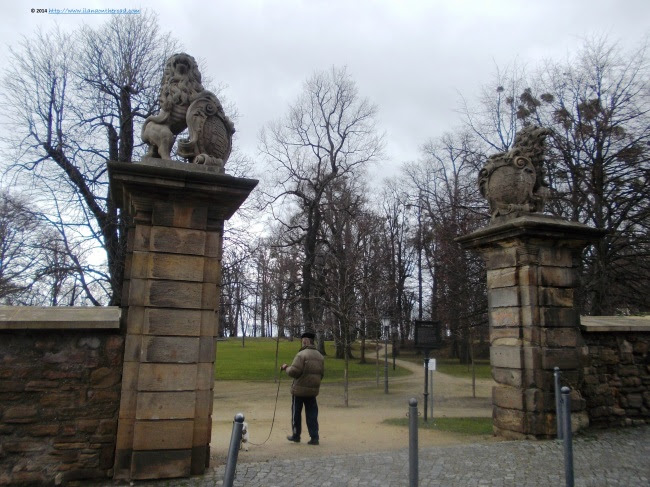 The walk to the castle isn't that easy and we need to stop several times. The longer stop is in the Lust Garden, a baroque creation of the 18th century turned into an English garden one century later. With the exception of some joggers and some dog owners, the big park is almost empty. What once used to be the Orangerie is hosting nowadays the town's archives. As the park has a high concentration of special flowers and vegetation and I would be happy to return for a visit in the high green season. 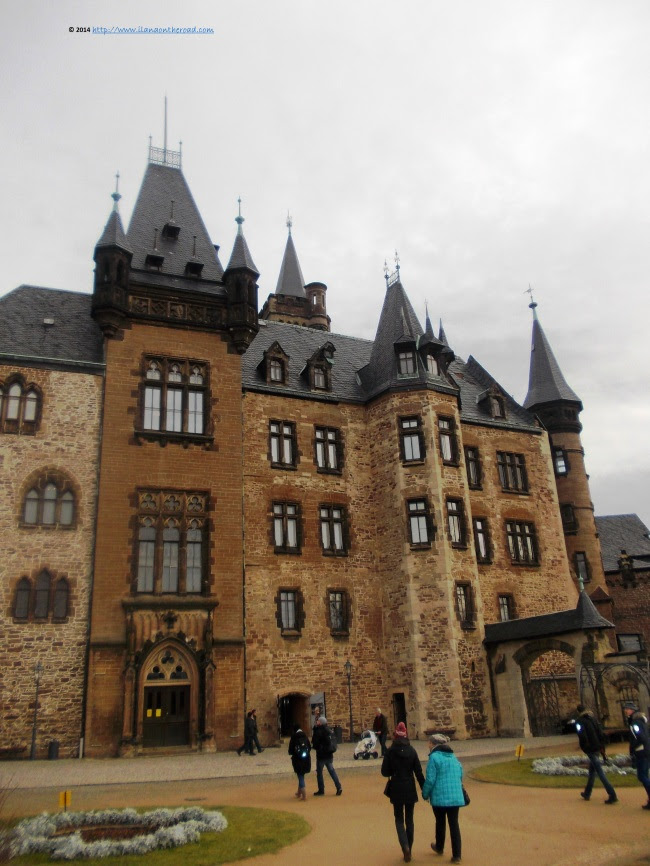 After a little effort, at the end of a long walk through the forest, we are finally at the castle. It is the last day of a winter festival and it's plenty of people around, especially families with children, running outside while their parents are sampling some mulled wine or beers. After we have a look over the beautiful Harz area from the top of the terrace, we make a tour of the residence. Since 1429, it belonged to the Stolberg Wernigerode family, and was open as a museum since 1930. 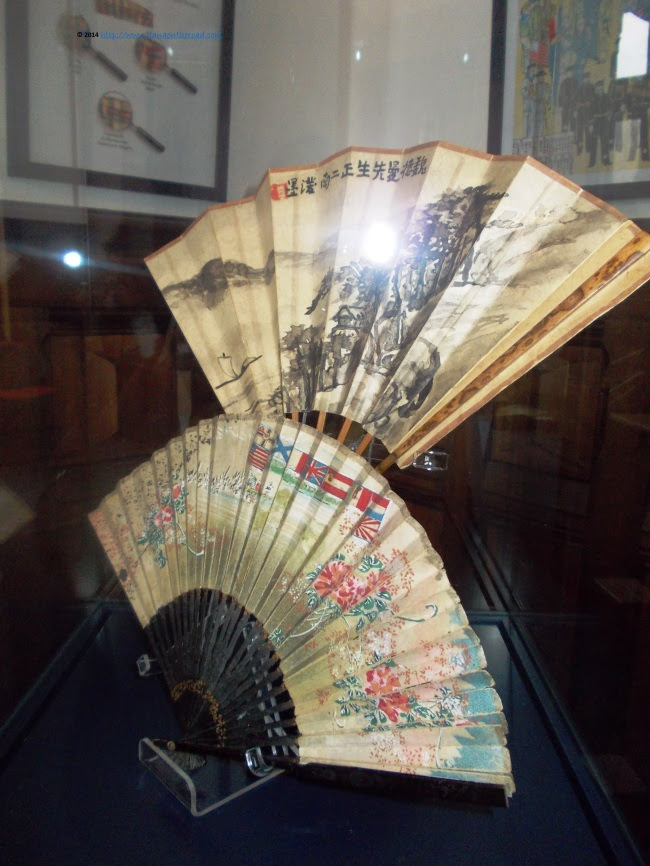 The small interior yard with stone statues leads to various parts of the castle. In one of the rooms, there were drafted for the first time the projects of social security and insurance later adopted by Otto von Bismarck that still makes Germany special within the other European counterparts. The interiors are modestly furbished, with a lustre of well being. Surprisingly, we discover an exquisite exhibition of fans, from all over the world and ages, including some little introductions in the secret fan communication. 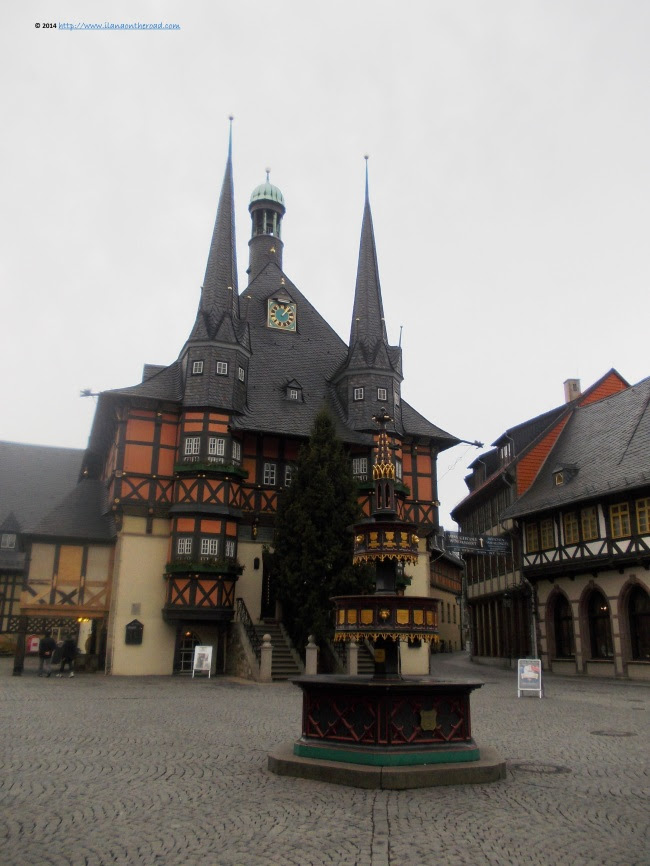 It is about time to return in the city, and this time we chose the cobblestoned road, that leads us faster to the old streets of the city. The old townhall and the central square is petite, with painted wood constructions and golden decorations. I close my eyes trying to imagine how beautiful this corner could be under the light of the sun. 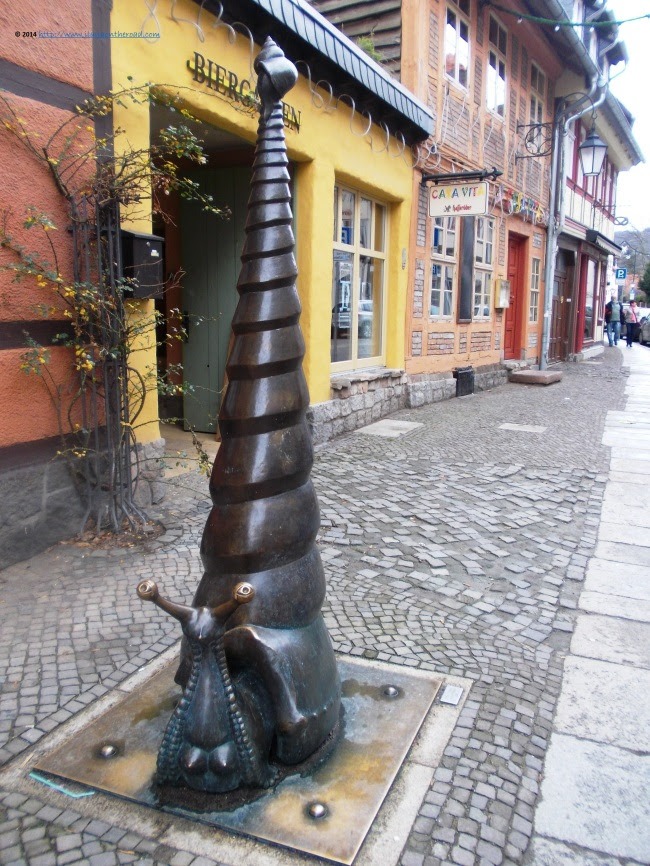 As it was not enough art around, modern statues are introducing the visitor busy to photograph the old buildings into the creative ambiance of our century. With so many colours and interesting shapes, everything looks perfectly at its place. 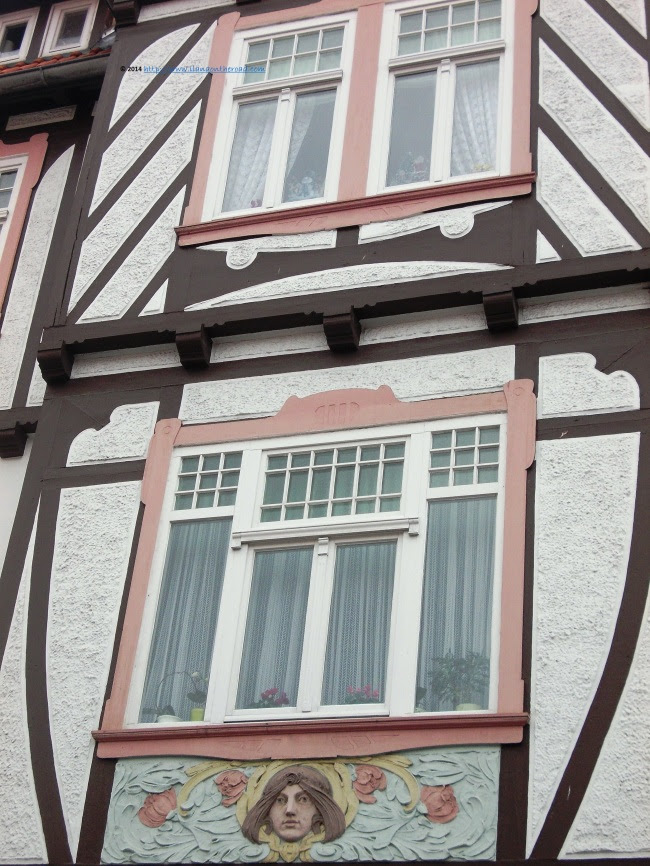 Many houses still remind of the old industries of the inhabitants in the area. Besides trade, mining was one of them, as in many other places in the region. 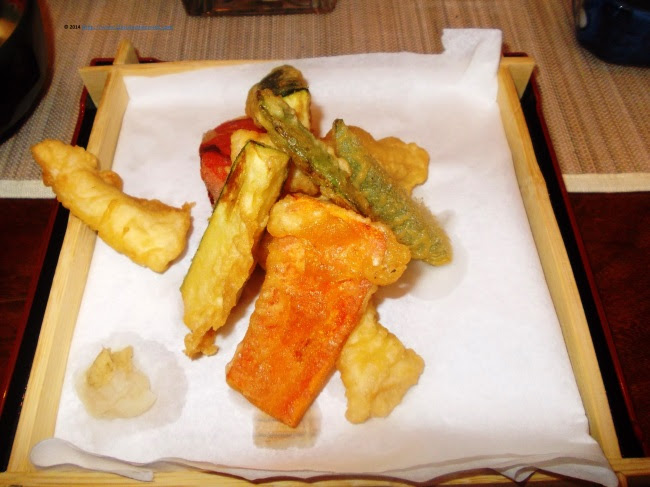 After hours of walking, we need a good meal. This time, I don't have to search too much, as another reason I visited Wernigerode is for checking a gourmet restaurant recommendation, Orchidea Huong, featured in many German gourmet publications. It serves Japanese and Vietnamese cuisine, very fast and always with a smile on the face. I started with a first time delicious avocado shake, followed by some tempura veggies and Yaki soba. I refused the free plum drink generously offered at the beginning of the meal, but I am happy to have a great Vietnamese coffee. The ambiance and the good are so good that I leave with a shade of regret. 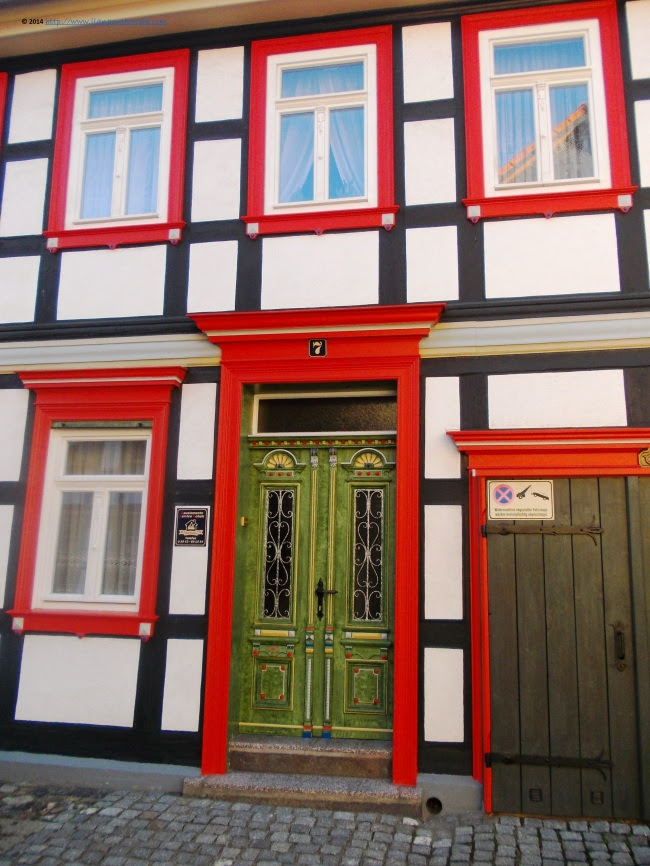 Moving more slowly this time, I pay a short visit to the Schiffmuseum, explaining the evolution of the local urbanism with a beautiful photo exhibition at the first floor featuring the local natural richness. This seems to be the only museum open this time, as the local Harz museum is closed. Many of the tourists here looks to stay for more than one day and probably they can also enjoy more sightseeing and even a hike in the mountains. The accommodation offer is generous, from old luxury hotels to rooms for rent at affordable prices. 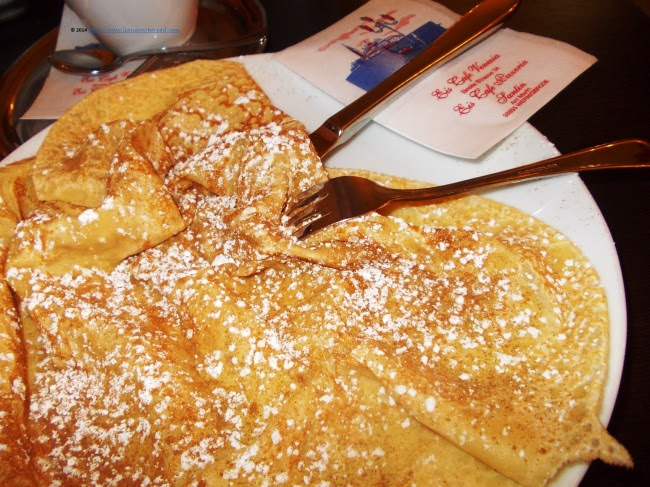 Equally rich is the offer of coffees and other desserts. As the elegant Coffee Wien, serving Harz locals since the 16th century, was relatively busy, and I was hungry for a crepe, we stop to the Eiscafé Venezia, who doesn't look extremely high-class but the service is very fast, affordable and the crepe is tasty. Good to try some proletarian choices from time to time, after all. 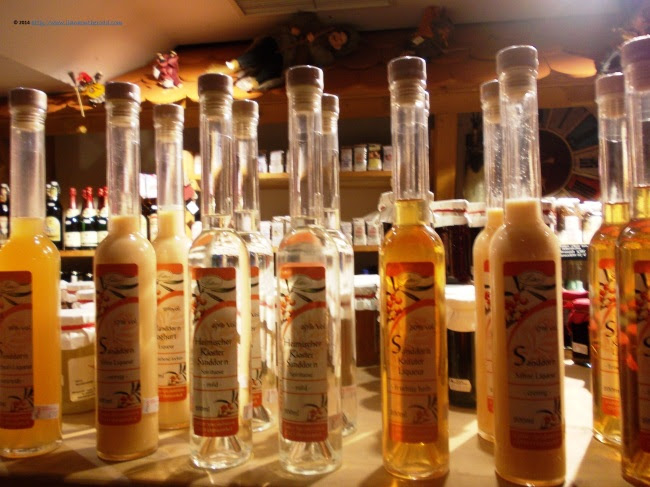 It is getting late and colder and darker and we don't have too much time left. Shortly before taking our HEX train back to Berlin, we have time to have a look at the local culinary specialities. It seems that people are eating a lot of wild animals around, and I suppose that they are also hunting a lot. For the vegetarians, the offers includes many local liquors and different types of honey. Another not too much known tradition in the area is the porcelain: Hütter, considered one of the smallest factory in Europe, created in 1976, alongside with other small artisan factories. The local legends frequently consider the area as a favourite location of witches hence the overwhelming presence of ugly looking ladies on brooms hanging up in all the shops selling local products.
As we are running back home, we conclude that our friends were right: Wernigerode is a beautiful place that left us strong enough memories for returning as soon as possible.
For more insights about Wernigerode, here is the dedicated Pinterest board: http://www.pinterest.com/ilanaontheroad/wernigerode/
Posted by Ilana WD at 12:07 AM