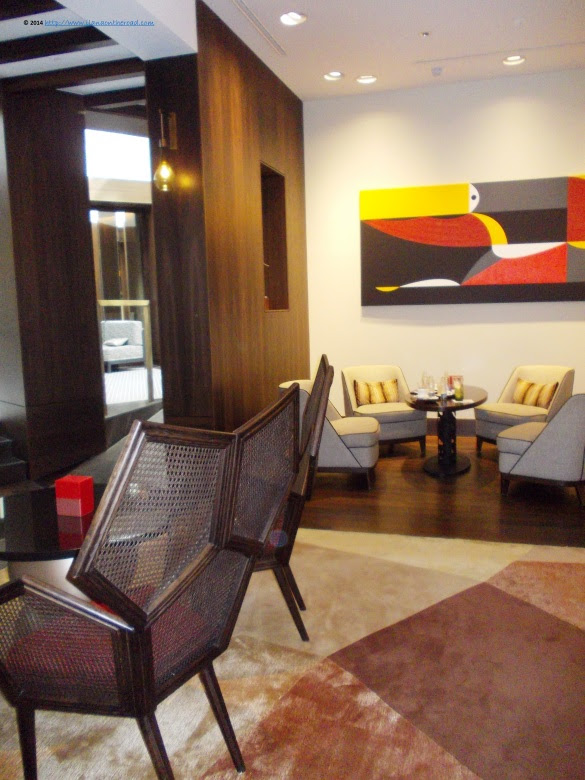 Budapest is a source of permanent temptations for the travel blogger, and I during my stay - more details and stories coming up soon - I hardly had some free time left. The weather was hot and the streets were busy, with so many things to do that I needed to be up early in the morning every day. With such a crazy schedule, when invited to spend one full hour tasting the afternoon tea at Kempinski Hotel Corvinus I sigh with relief: I was finally able to have some free time only for myself without running in as many directions as possible. After a tour in the Jewish quarter, I walk around 15 minutes till I spotted the modernist architecture of the hotel, close to Budapest's fashion street. A soothing background music, and the moderate cold accompanied the beginning of the relaxing process that was about to continue for the next 60 minutes or so. 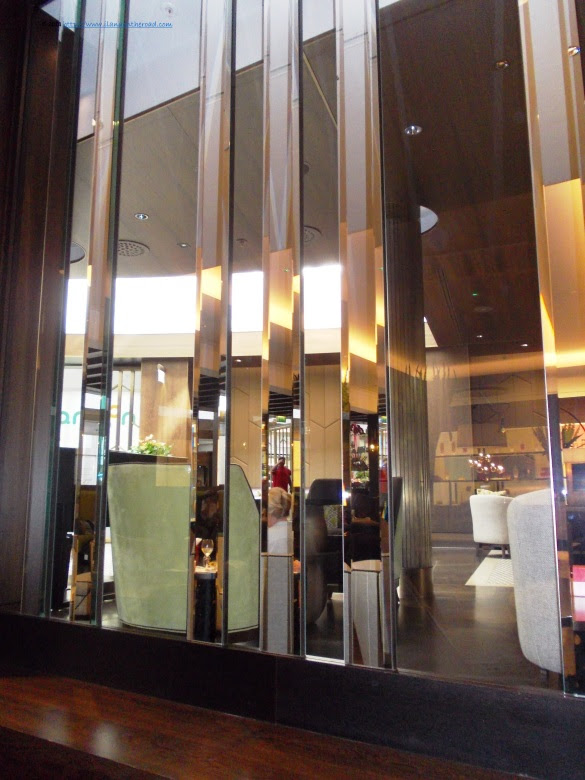 Compared to other Kempinski hotels I visited in the last years, the one in Budapest has a bold revolutionary look, with irregular shapes of the furniture and unusual angles of the building, reflected in the pieces of mirrors that give even greater perspective of grandness and multiple perspectives. A mixture of modern styles - the pop-art being easily recognized in some colorful patches and pieces of furniture that doesn't bother the visitor in any way. I took a seat in the corner and had a look at the latest news from The Economist and some daily German publications available for consultation. With a mixture of customers, from travellers to business people, the selection was good enough for keeping various guests well informed. 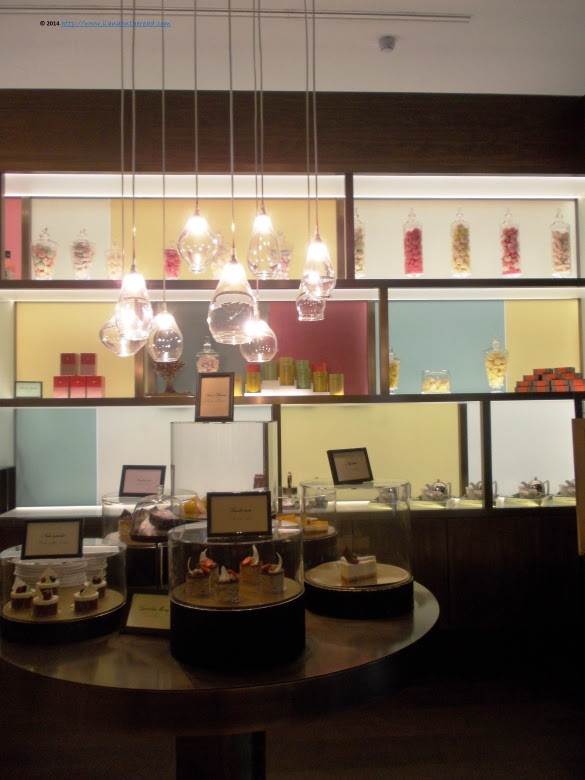 At the bar, a pastel coloured background that made me intensively think at cotton candy was displaying tempting sinful pieces of chocolate - small or big, with fruity decorations or just another layer of chocolate. As a late believer in the charms of chocolate, I might be so hungry for catching up with the long time of deprivation that I better keep myself away of an overdose. I returned to my seat, entering the stage 2 of relaxation, resting my traveller body on the pillows of the comfy plush chairs with the buzz of Babel around me, mostly German and American tourists telling stories about their latest travels. 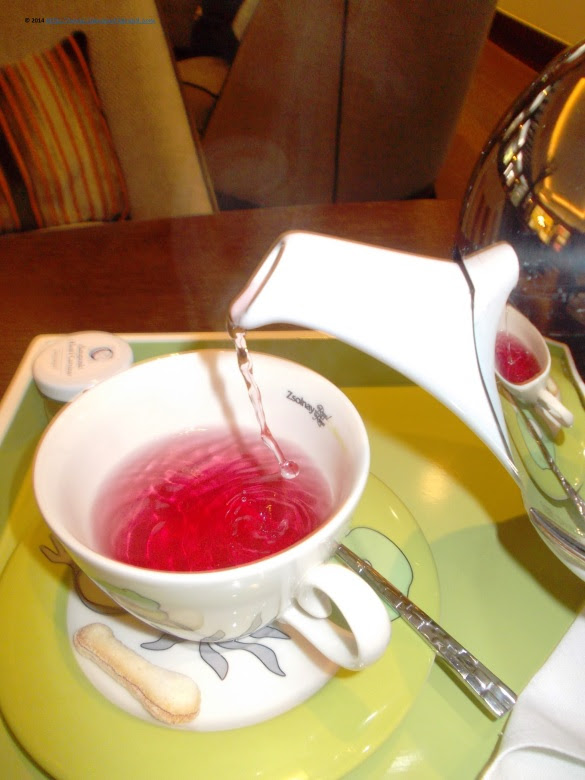 The service was prompt, friendly and patient with my begging for more time till having a final decision about the tea. Not sure what will be next, I decided for a simple red fruit tea, served in a traditional Zsolnay porcelain. It was refreshing, perfumed and equally tasty either hot or cold. The metal teapot kept the content warm till the end. What can be better on a very hot day than a hotter good tea? 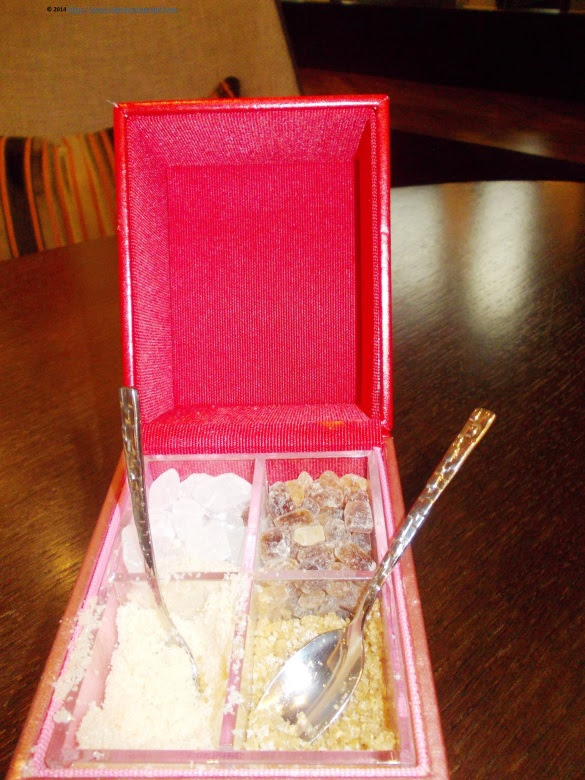 The tea was accompanied by a red box containing not diamonds - this time - but four different sorts of sugar. I admired the choices but decided to have my tea with a little bit of honey from the small jar brought on the tray. 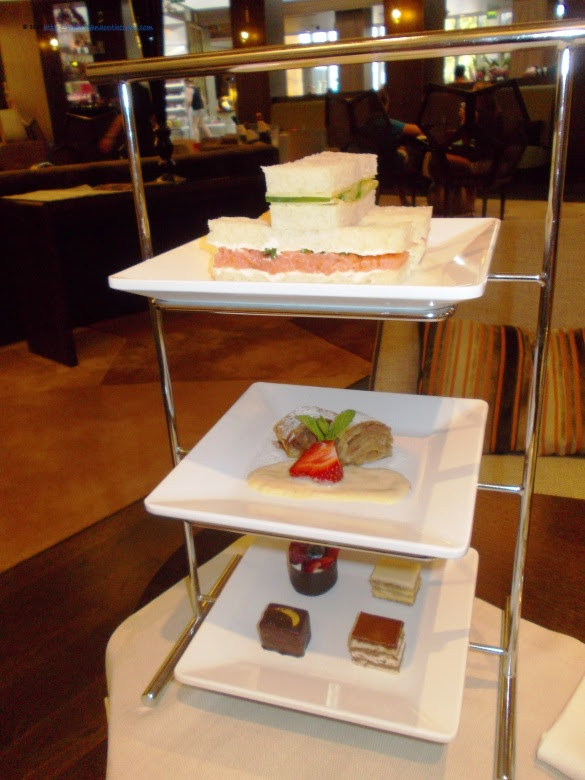 I have no idea in which stage of my relaxation I was when the 3-tiered plate had arrived, but from that moment on, I was already far away on a happy cloud. The smells of fresh pastry and pure cocoa met the seriousness of the sandwiches with salmon and cucumber. Very inspired and welcomed was the idea to bring different sets of cutlery for being used for the very different types of foods. The sandwiches were simple, not very sophisticated yet with genuine full tastes of cheese and salmon and well made white bread. 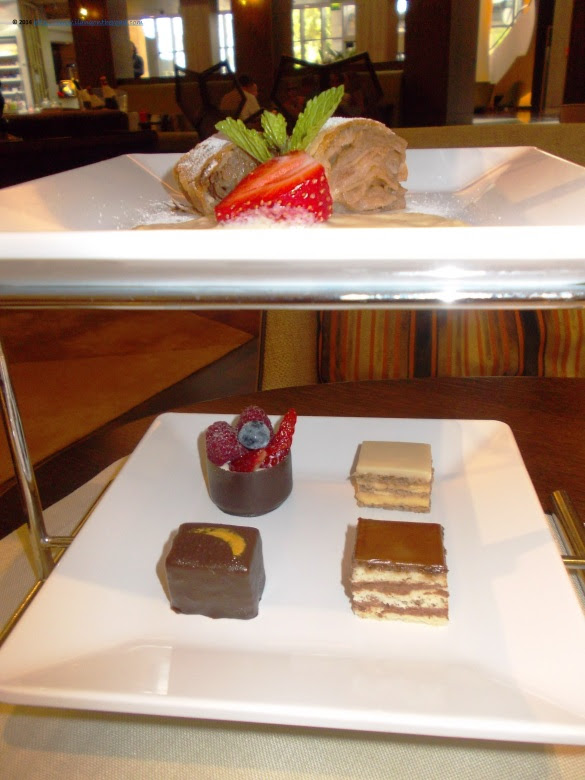 In the middle, a very welcomed Hungarian-Austrian pastry, an apple strudel wrapped in Hungarian made dough. The crunchy feuilletage was soaked in a sweet creamy sauce, aromated by a leaf of mint and refreshed by the elegant strawberry on the top. 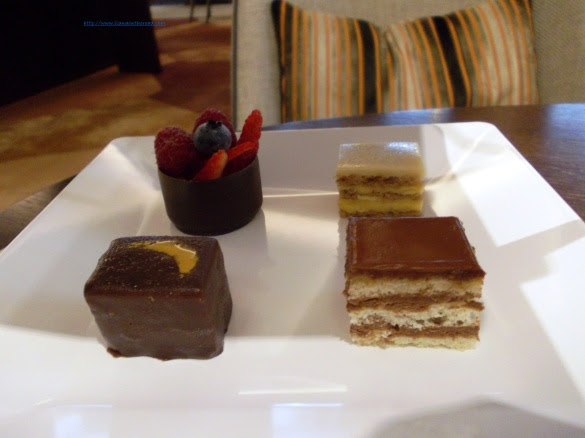 The four petit fours were unforgettable for a long time. A massive drop of cocoa with a touch of gold, followed by a sandwich biscuits with milky cocoa cream, a white chocolate variant with a bit of white cream and the small fruits embraced in a fine yet consistent layer of chocolate. 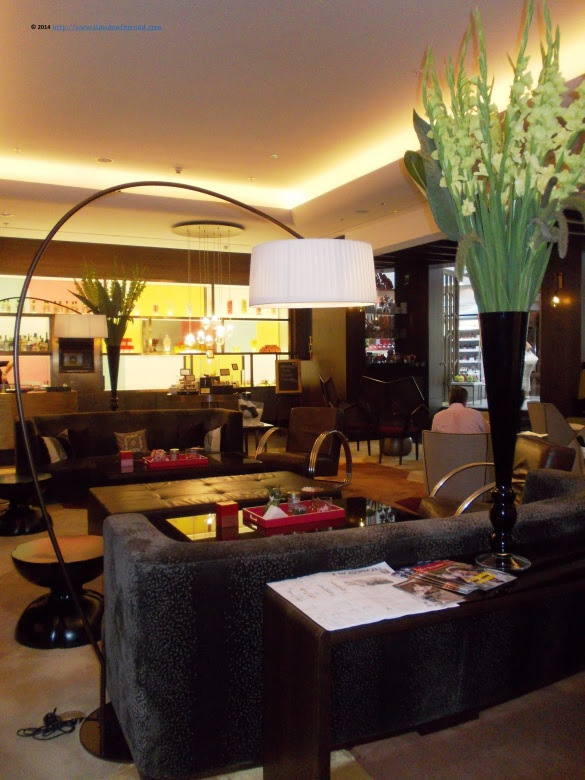 With every single bit I was feeling more at home in the small lobby, separated from the rest of the building by discrete parenthesis of the space. The huge flowers arrangements or the delicate pieces of arts and interior design were creating almost invisible separations of the area, enough for giving a special sense of intimacy not easy to grasp at the first sight. 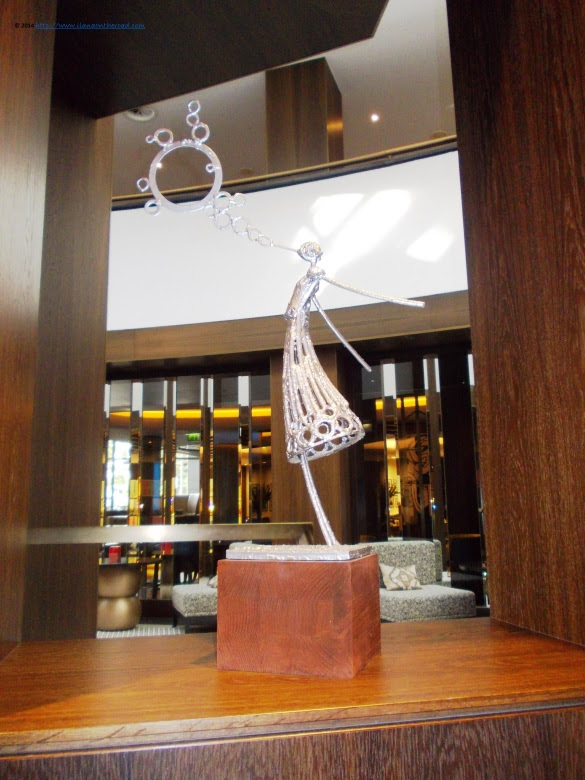 With a punctilious care, unexpected pieces of art were appearing from the space openings, while the colours and shapes of ceilings, pavement or furniture matched in the most spectacular compositions. 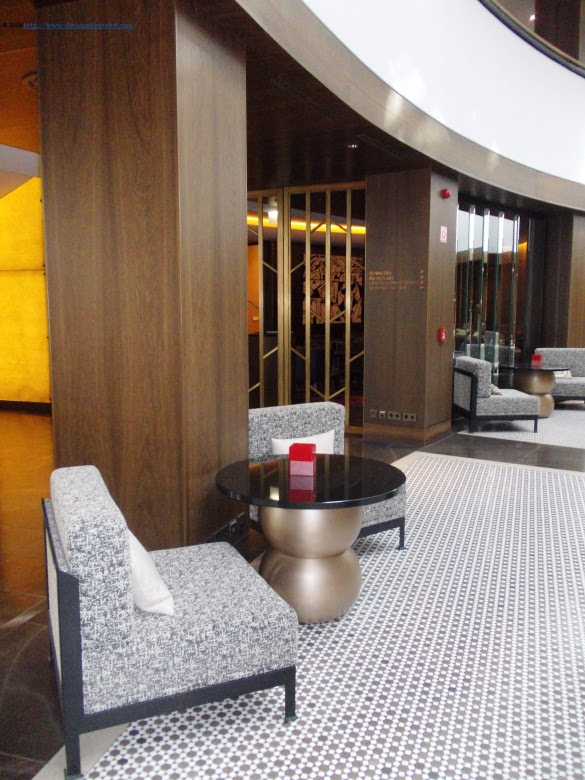 When my afternoon tea experience was over, I walked a bit more in the lobby, for some last memories and more details of this futuristic space. In one corner, I discovered the lightning entrance to the Nobu restaurant while in another corner of the lobby, some beautiful macarons were displayed in pyramids. For me, the relaxation was over though. True is that chocolate makes you happy, but eating chocolate in a beautiful place can make you even happier. Now, my spirit was high enough for even more travels.
For more insights from the hotel and their elegant afternoon tea, have a look at the dedicated Pinterest board: http://www.pinterest.com/ilanaontheroad/hotel-kempinski-budapest/
Disclaimer: I was invited to test the afternoon tea at Kempinski Hotel Corvinus Budapest, but the opinions are, as usual, my own.
Posted by Ilana WD at 11:13 PM