An agglomeration of over 18,500 social flats, Gropiusstadt is a place where you rather live but rarely go to visit. Unless you are interested in architecture and in a social history of Berlin that you don't read it too often in the usual travel guides about the city. Part of the Neukölln borough, this part of the city developed as a working-class area since the beginning of the 19th century.
After the WWII, the urban planners realized that the constructions were not appropriate for the needs of the working class and requested the famous Martin Gropius, the founder of the Bauhaus school of architecture that leaved Germany for the US during the war, to plan a new urban settlement. The works took place between 1962 and 1975, resulting in a modern agglomeration aimed to host 36,000 people. Unusually for Berlin, there are sky scrappers everywhere, part of larger units including school, kindergarten, parks and community centers.
Besides its relevance for the architecture lovers, Gropiusstadt - Gropius city - become famous for being the residence of the young rebels of the Germany, mentioned in Christiane F. book 'Wir Kinder von Bahnhof Zoo', a revelation book about drugs abuse among youngsters in the Western part of Berlin.
Although I've visited this area before, a couple of weeks ago I decided to cover it systematically, starting from the three main U-Bahn (metro) stations - on the U7 line. 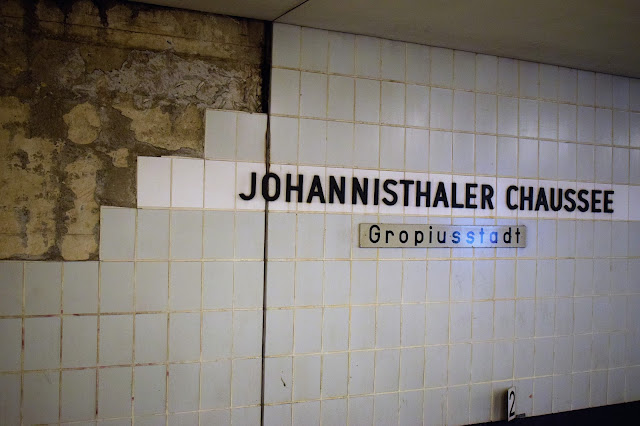 First stop: Johannisthaler Chaussee. The metro station looks desolate, aesthetically unwelcoming, but it makes you forget the ugliness by leading you directly to a center of consumption, a shopping center - Gropius Pasagen - newly built, replacing the one in use before the Berlin reunification. 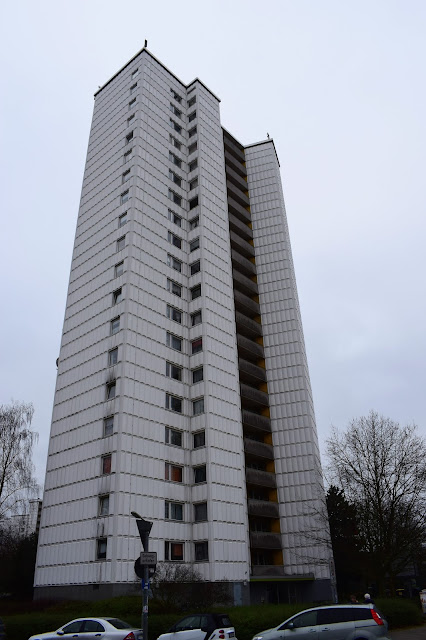 We turned down to Kirschnerweg and Anita Nemitz Weg, our presence becoming smaller and smaller in the middle of the 10+-store buildings. For Western Berlin and for West Germany in general such construction were just bold at the time as except maybe Frankfurt am Main, you can rarely see buildings more than 5-6-store. Many of them were looking quite worn out though, with black patches of humidity against the dirty white facades. 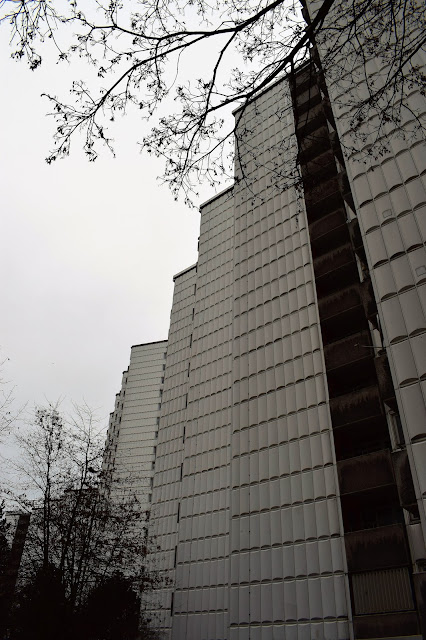 The buildings are geometrically set shoulder-to-shoulder, creating at least for the camera, an interesting impression. Although I find the game of angles and volumes quite fascinating, my personal choice remains for the small houses with big gardens, private islands in the outskirts of the city. 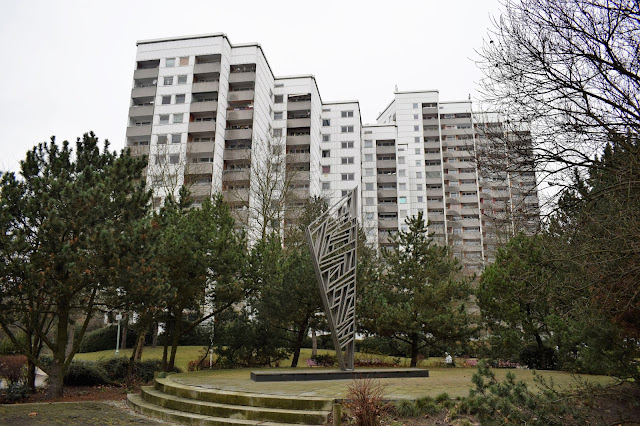 The monotony is happily disrupted by blue balconies - some buildings on Johannisthaller Chaussee - or some modest works of art in the middle of green areas in between the concrete constructions. In the middle of the week, almost lunch time, there were not too many young people around, but I can imagine this place full of children roaming around in the summer and early autumn. The intermediate spaces between buildings have a mediation role to bring together people from the area and create small communities. 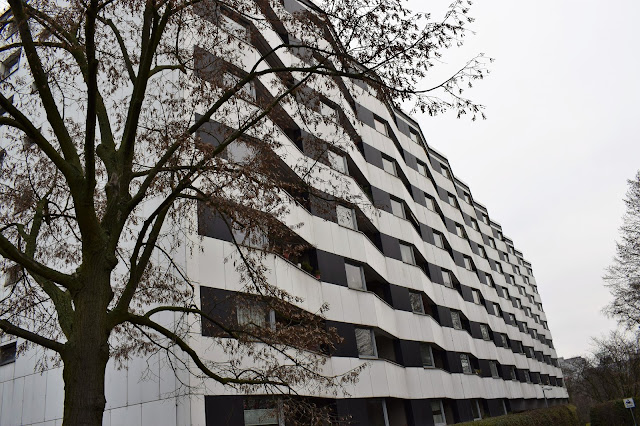 The wave-shapes of some facades create individuality for some buildings, but also offer a creative use of the casual construction materials. 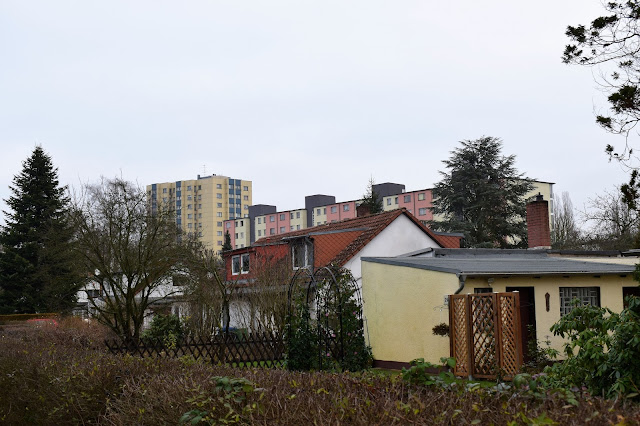 Tucked between concrete, there is an area that probably was originally built before the Gropius plans took shape. Around Severingstrasse, there is a relatively modest area where individual families occupy one house, deserved by a garden. My healthy alternative to the lack of privacy of the huge social units. 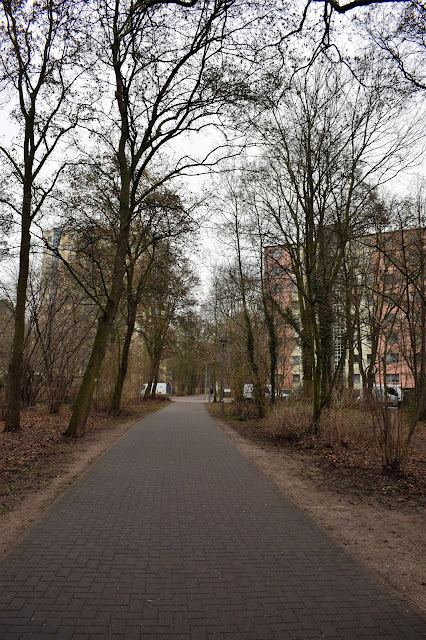 The natural area, which was generously maintained all over this part of Gropius Stadt, brings balance and fresh air in an area predominated by heavy grey buildings. It also offers a private space and area for reflection and meditation. By comparison, in the former Eastern European blocks of flats areas - the so-called Plattenbau (more about them in a future post) - the constructions ate almost entirely the green space. 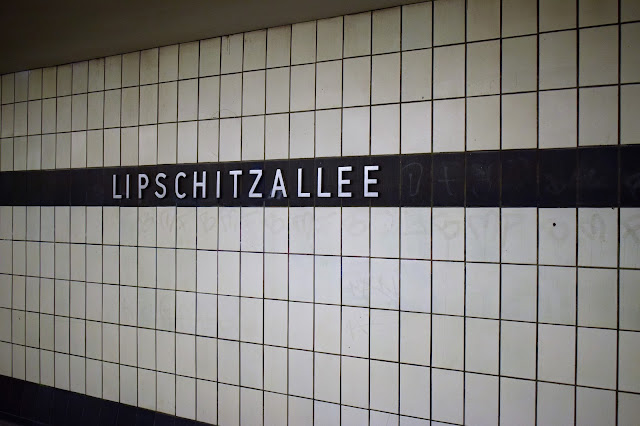 The next stop, one metro station away: Lipschitzallee. It looks better kept but still with tiles that reminds you hospitals and nothing pleasant for the eyes in general. 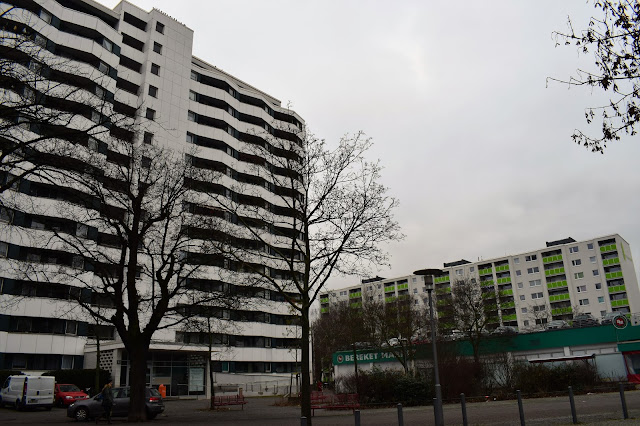 In this part of the city, the buildings are more organised according to community functions, with Gemeinschaftshausen (Community houses) in the middle of radial disposition of buildings hosting libraries, religious spaces, libraries, children meeting areas. 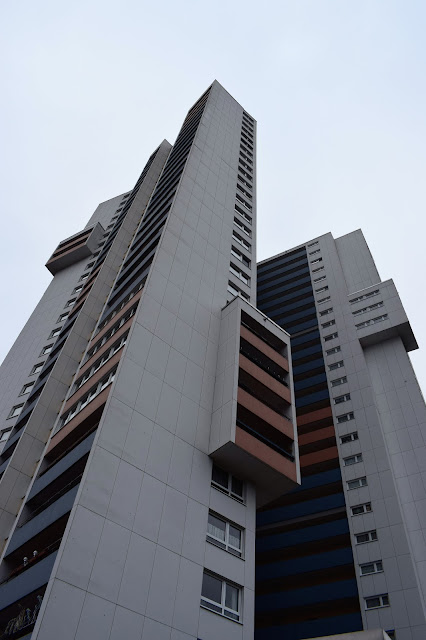 The buildings are even higher, with blocks added in a creative - even colourful way. This part looks more modern and more attractive, with more diversity in terms of volumes and disposition of the buildings. The buildings also look better maintained. 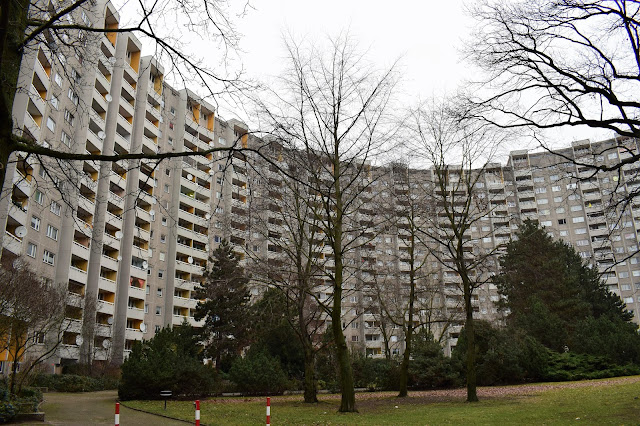 Another feature of the area are the many open spaces and markets, with abundant wild vegetation. 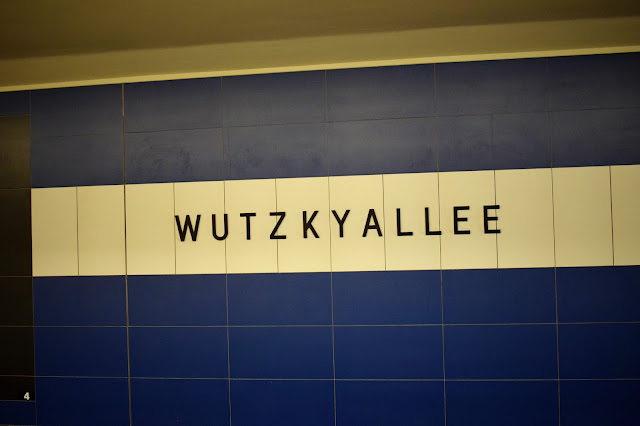 The last stop of this tour: Wutzkyallee metro station. It looks much better, not only because of the blue tiles, but also for the various pictures presenting various stages of construction of the area, where Gropius himself appears in the middle of the plans or observing the various developments. 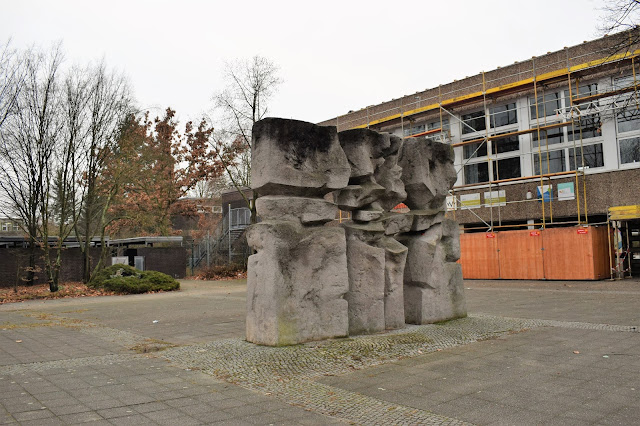 Statues - inspired by the Eastern Island works, maybe - are placed in the front of the school. There is also a Neighborhood center - Nachbarschaftzentrum - aimed to create the social net of human relationships. 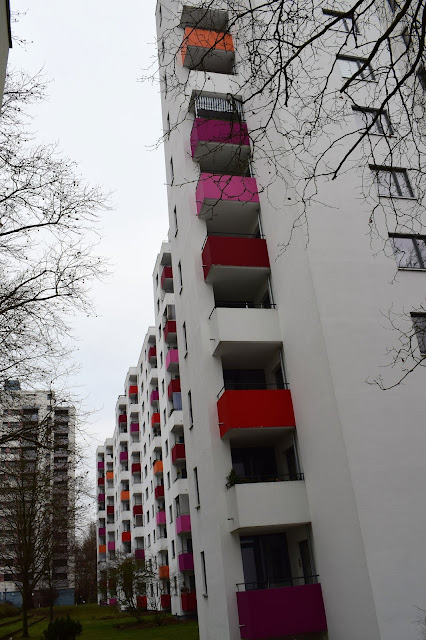 My favorite part of this area, maybe from the entire Gropius Stadt, is around the Theodor Loos Weg, for the the pastel and moderately colourful balconies. 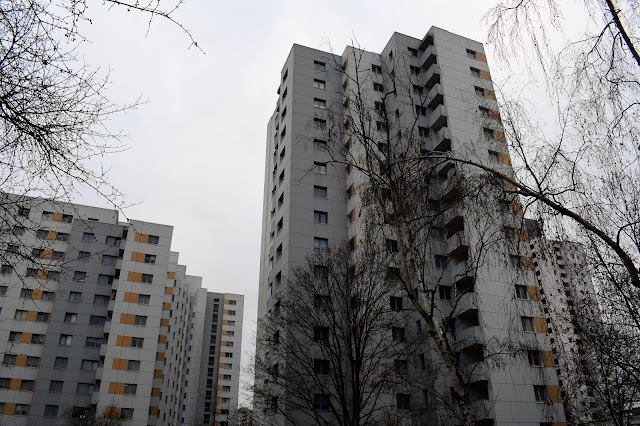 My personal tour of Gropius Stadt lasted more than an hour, during which I felt like a visitor in a completely different world. Although I would not love to live here, the social and architectural experiences revealed just another piece of my beloved Berlin.
Posted by Ilana WD at 12:27 PM