The 2017 edition of Berlinale is in full swing these days, with movie lovers from all over the world gathered in the German capital city to check the newest cinema productions and creations. What is maybe less known is that during the years Berlin itself was the location of choice of many movies, many of them internationally acclaimed productions. For the movie lovers visiting Berlin, I bring you the best destinations to discover in between the movies' fix. 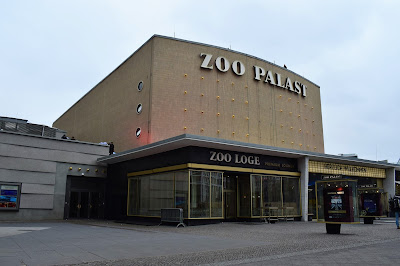 Zoo Palast is one of the many locations where movies from the festival will be presented. This movie theatre recently renovated and offering luxury conditions by using the latest high tech innovations is part of the history of cinematography in this city. Initially a 6-stage exhibition space opened in 1906, since 1915 was turned into a cinema - Palasttheater am Zoo. Here was presented in 1927 the famous film Metropolis, a cult science-fiction movie about urban utopias. 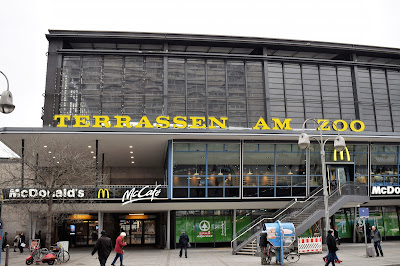 The Zoo S-Bahn station is always busy with commuters in and from outside the city, as an important transportation hub in the Western part of the city. Both its location and massive architecture were featured in a couple of local and international movies.
For the German children movies, Emile and the Detectives, after the famous novel by Erich Kästner is a reference. Made in 1931, it features the station before the war, as well as parts from the Western side of the city which were massively destroyed during the bombings. From approximately the same period (1930), People on Sunday - Menschen am Sontag - is a movie about the city and its people, featuring among others also the Zoo Station. The actors are simple people, as the movie follows the life of a group of residents. The screenplay was signed by Billy Wilder, which was forced out of Germany during the Nazi era, succeeding to make a name for himself at Hollywood and returning later to make movies in Berlin. Around a similar idea was created another contemporary movie, where Zoo and the Ku'damm area appears as well: Berlin: Symphony of a Great City, directed by Walter Ruttmann. It features a day in the life of the city, from early in the morning until late in the night.
Another local movie which got a cult status is 'We, Children from Bahnhof Zoo', featuring the (real) story of Christiane F., a young drug addicted girl from the liberal Berlin. If you want to get more into the ambiance of the movie, you can also visit the Gropius Stadt, where most of the protagonists of the story, including Christiane F. were living.
Last but not least, if you love thrillers and spy movies, you probably watched Bourne Supremacy at least once. One of its locations, where an epic chase it taking place, is the same Zoo station. About another location of this movie, a bit later in this article. 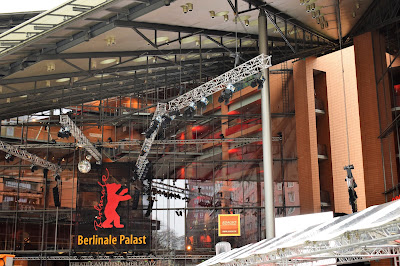 The heart of the Berlinale activities beats in Potsdamer Platz. Berlinale Palast is the main location where the international stars are walking on the red carpet, press conferences are held and the winners are celebrating their successes. The entire construction located in Marlene Dietrich Square, was erected in the 1990s is the architectural concept of the world-famous architects Renzo Piano and Christoph Kohlbecker. The rest of the year it hosts a musical theatre and is completed by a casino. 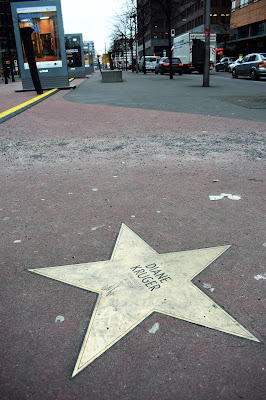 Since September 2010, Berlin has its own Avenue of Stars - Boulevard der Stars - Hollywood style, featuring German movie stars - both film directors and actors. Since the inauguration of the first star - Marlene Dietrich's - the number of honored artists goes close to 40. Among those offered the high respects are: Romy Schneider, Diane Kruger, Hans Zimmer or Billy Wilder. 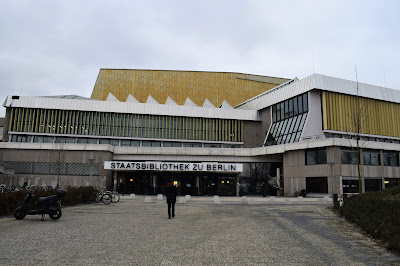 Where it stands nowadays the Berlin State Library it used to be a wasteland, featured as one of the many locations of the Wings of Desire - Der Himmel über Berlin - movie from 1987 by Wim Wenders. If you want to understand the tremendous changes this city underwent in the last decades, having a look at the curious architecture of this place, facing another interesting architectural construction - the Philharmonic - is an interesting stop. In the movie, angels watching over the city of Berlin are listening to the thoughts of the people living in the city, trying to comfort their distress. Besides the Staatsbibliothek, the angels choose to stop to listen in the following Berlin locations: Siegessäule - or Berlin Victory Column -, Kürfurstendamm Boulevard - including Cinema Paris, part of the building of the French Institute -, Kaiser Wilhelm Gedächtniskirche and ICC Berlin - where the most important international fairs are held. 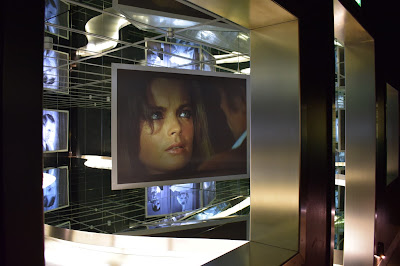 While crossing on the other street opposite the Avenue of Stars, there is another interesting location for movie lovers: The Film Museum and the Cinemateque - Kino Arsenal. The Film Museum features the rich history of German cinema and television, including a special section dedicated to science fiction and iconic German movies. It is not only well documented, but it also has a special architectural conception. Kino Arsenal regularly hosts thematic film festivals and presents old movies from the early times of the cinema, also for children. A similar museum exists in Potsdam too, recently featured on my blog among the special destinations for movie lovers.

Memorial of the German Resistance 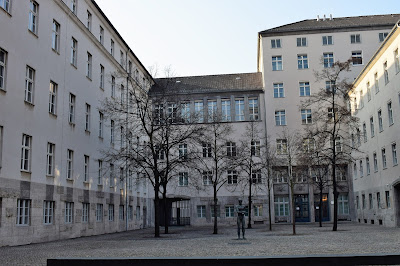 A couple of minutes walking from Potsdamer Platz, there is a memory place relatively less known: The Memorial of the German Resistance. Situated on Stauffenbergstrasse - formerly Bendlerstrasse - after the name of the head of the resistance movement within the military against Hitler - the building used to an important part of the military command chain of the Third Reich. The Wehrmacht officers who coordinated the 20 July plot were shot in the courtyard. This location, since 1993 part of the building of the German Ministry of Defense, was featured in two movies featuring this episode: the German production Stauffenberg in 2003 and the Valkyrie movie, featuring guest star Tom Cruise. Before the filming began, the crew had a minute of silence in honor of those killed in 1944. Other location of Valkyrie near Berlin was at Beelitz. 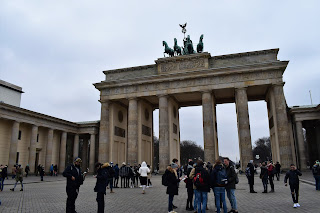 If you are into Cold War movies - an important tool of soft diplomacy at the time - you may remember the ironic One, Two, Three by Billy Wilder. This 1961 fast paced comedy is a political satire of life in the divided city. The division affected the movie production as well, as the iconic Brandenburg Gate had to be completely rebuilt because filming it life was impossible due to political restrictions.
Instead, for the Indian-German co-production of the Bollywood movie Don 2, with famous star Shah Rukh Khan, the Brandenburg Gate appears in all its splendor, and in the original version. Most of the movie was filmed in locations across Berlin, among which: Olympia Stadium, Berlin Cathedral, Gendarmenmarkt, East Side Gallery, or Park Inn Hotel - on the top of which Khan (actually a double) keeps its fun with the heart in the mouth when he jumps 250 meters depth. 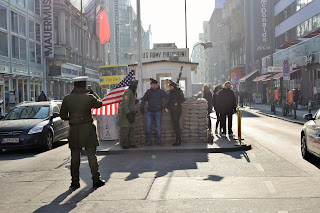 Besides exotic locations in India, Octopussy, the 1983 James Bond movie features the nowadays popular location of Checkpoint Charlie. In this movie, Bond also passes Kürfurstendamm metro station and the main shopping area, and various points alongside the then Berlin Wall. 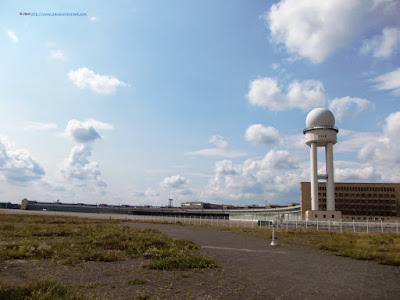 One of the world's largest buildings, Tempelhof airport is currently used as a location for movies and commercials, as well as for tours through the underground of Berlin. Outdoors, it hosts an open air park that the citizens of Berlin decided to keep as a natural reserve instead of being used for the construction of modern real estate compounds. A former airport used intensively during the 1948-1949 airlift for delivering food to the city by the Allies, it was one of the many locations across the city for shooting scenes from the Hunger Games movie in 2014. Another location was the former powerstation that supplied until 1997 the Mitte area with energy - Das Kraftwerk - currently a space for various happenings. The massive ugly grey walls and the huge industrial spaces were the perfect match for the dystopian ambiance of the movie which was launched in 2015 at the futuristic Sony Center in Potsdamer Platz. Other scenes from the movie were filmed at the famous Babelsberg film studio in Potsdam and the ICC Messedamm building.
Tempelhof airport appears also in the political satire of Billy Wilder. 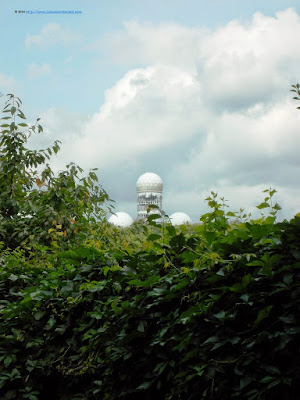 The headquarters of the former CIA listening station in Grunewald is a fascinating visit. When I visited the place a couple of years ago, there were some corners looking as were used just a day before, with electricity cables lying on the floor as the offices were evacuated in a big rush. Nowadays the building is covered by graffiti, vague reminders of the role of the building in the many intelligence confrontations during the Cold War. The station is featured extensively in the HBO series Berlin Station created by one of my favorite spy thriller authors, Olen Steinhauer. 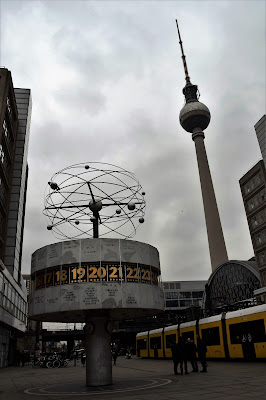 Either before or after the war, Alexanderplatz was always a famous location, featured in literary and movie creations. The famous novel Berlin, Alexanderplatz by Alfred Döblin accurately describing the atmosphere in Berlin during the Weimar Republic was turned in 1980 by Reiner Werner Fassbinder into successful German mini-series that were three years later released in the USA.
The famous world clock - Weltzeituhr - displaying the time for various cities around the world is another Berlin location featured in Bourne Supremacy.
A couple of meters away from the clock, near the Red City Hall, the Neptune fountain appears in a very interesting neo-realist movie by Roberto Rosselini - Germany Year Zero, about the post-War world of a Germany defeated as seen by a 13-year old boy. 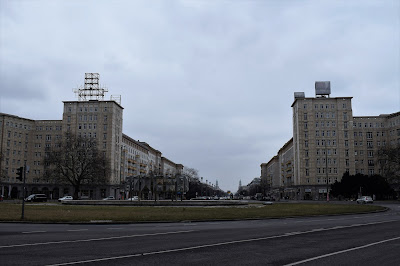 Good Bye, Lenin is an iconic film of the post-reunification German movie history. A lady member of the German communist party wakes up from coma after the reunification and his son tries desperately to make up the reality for preventing a bigger shock. It's is a tragic-comedy told ironically about the generational shift and confrontations on the two sides of Berlin and Germany in general, with impossible history to re-conciliate. The star location of the movie is the Karl-Marx Allee, an interesting sample of communist architecture of Stalinist inspiration.
Another movie keeping the same ironic note is Sonnenallee (1999), about life in East Berlin in the 1970s. The Sonnenallee in Neukölln is nowadays a vibrant, multi-cultural area with restaurants and alternative places, but it used to be at the border line between the two halves of Berlin.
For a more serious insight into the psychological context of the life in the German Democratic Republic, The Lives of Others - Das Leben der Anders - is focused on the effects of the omni-potent and omni-present STASI intelligence service into the most banal details of people's life. Besides the Stasi Central Offices in Berlin Lichtenberg that can be visited nowadays, it also features the popular cultural destination of Volksbühne in Rosa Luxemburg Platz. 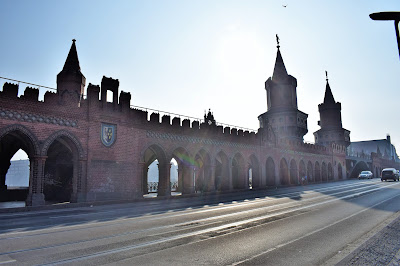 Run Lola, Run is one of my favorite movies about the Berlin I am living in. I love it for the free and optimistic mood it transmits and I love Lola too, for her easy going spirit and fast forward run through the city, from the Jannowitz bridge - featured in the picture - until far away into the Western point of the Deutsche Oper. This is the Berlin I love and I choose as my home city.
A journey through the city by its movies gives you even one more reason to love Berlin and want to know more of its secrets.
Posted by Ilana WD at 1:27 PM