Winter day in Ilsenburg, in the Harz Mountains

I haven't been in the Harz mountains for over two years, after a very intense period of time when I checked, one by one all the colourful and famous destinations in this relatively underrated area in the North of Germany. From the pleasant Quedlinburg to the nature-adventurous inspiring Thale or the surprising gardens of Blankenburg, I've seen almost everything that have to be seen here. However, when checking out a place where I can have a short-term experience of winter - just a bit of snow and some ice, but nothing more, I realized that I've never considered Ilsenburg. For people living in Berlin this destination doesn't say too much, but for those living in Hannover, it is one of the favorite destinations, only one hour away by car. It's their Potsdam, I've been told so I got encouraged to spend one full day in this small town. 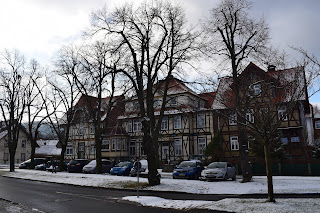 We arrived with the HEX after three hours of direct train ride from Berlin. Ilsenburg is very close from another colourful destination in the Harz mountains that I loved, Wernigerode, but it's lacking its business and crowds of tourists that are always on the streets snapping pics of the unusual houses. Practically, for more than 30 minutes upon arrival, we walked the empty streets without meeting anyone. No tourists, no locals, it looked like we have the town only for ourselves. 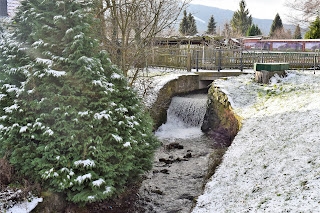 One of the features of this town is how nature is always interfering with the urban life. Ilsenburg is surrounded by mountains and sound of wild waterfalls is stronger than that of the 4x4 cars, so useful when you are living in the mountainous area. 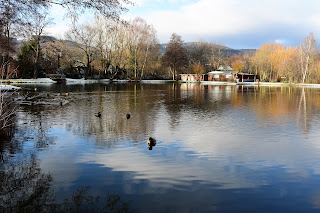 Ducks swimming lazily on the lake were the only active beings we encountered for a long while, in the middle of a frozen landscape. 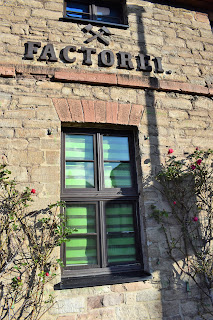 Although empty, the streets do have their own charm, with old 16th century stone houses gently surrounded by bushes of roses that despite the cold temperatures were in full bloom. 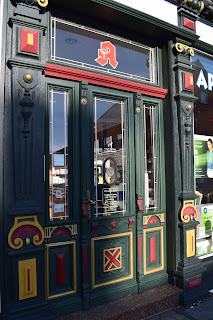 And colourful crafted doors adorning local shops or houses which are always a pleasant surprise for the eyes. 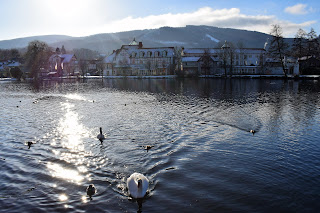 Getting closer to the central area - thanks to the many directions leading the few tourists to the main attractions - we encounter gracious swans doing their daily lake tours. 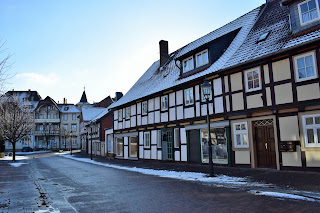 The Harz mountains are also famous for their half-timbered traditional houses, coming in different sizes, colours and historical styles. In Ilsenburg, they make it the big majority of the constructions. 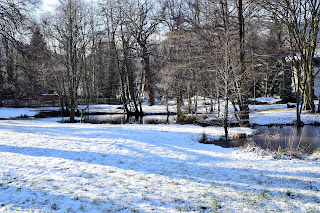 As we are walking slowly the streets, we finally encounter a real winter landscape, as I haven't seen in a long time. I am not a necessarily winter person, but I grew up with four seasons and winters with mountains of snow that I liked to play with as a kid. 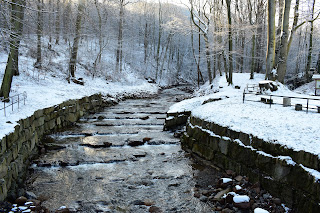 Everything looks so quiet here too, but we can see the footmarks in the fresh snow, a sign that we are not so alone here. But with one exception, of a dog and his owner, we don't encounter too many creatures on our way. 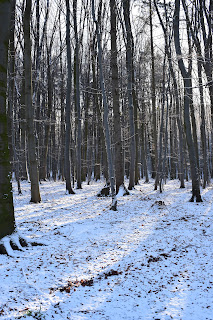 Breathing deep the silence and the crispy air is a very healthy meditation practice that I keep repeating during the small hiking. I can imagine how beautiful this area is in the summer and how blessed are the people living here to be so close to nature. 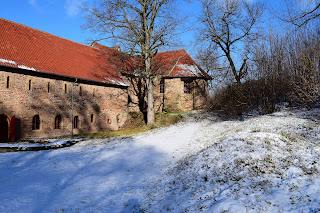 On the top of a small hill, there is a small citadel-looking monastery. 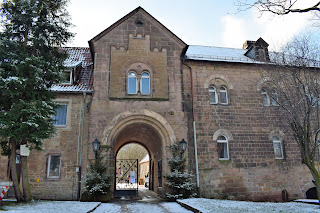 It serves nowadays mostly as a cultural center and hosts also a small coffee place that I am not yet tempted to visit, as I want to keep filling my lungs with fresh air and my mind with clear thoughts. 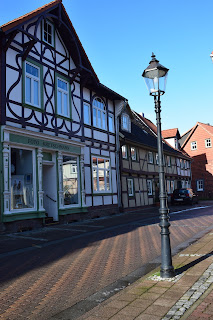 I want to be outdoors as long as the day lights allows, enjoying the rays of light and using my camera to catch the silent local beauty. 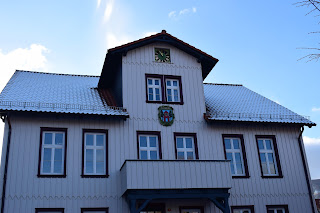 In Ilsenburg, even the city hall looks like a doll house, small and colourful and very inviting. 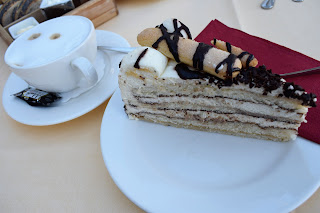 It is time for a break though, and the first stop is at the restaurant of the five-star Zu den Roten Forellen, which has an exquisite lunch menu. I am only for a coffee and a delicious tiramisu which melted deliciously in the mouth. The service is excellent and very careful, the kind that you would love to have more often at a 5-star location in Berlin. 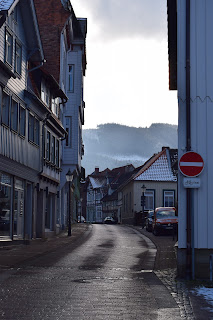 With sugar at high levels allowing to cope with another batch of cold hours, I keep exploring the houses and the streets, surrounded on all sides by the snow-capped mountains. 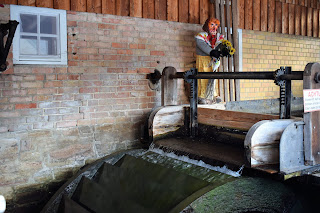 The traditional witches' motif so frequent in the literature inspired by the Harz mountains are hanging everywhere, included near an old mill dating from the 16th century. 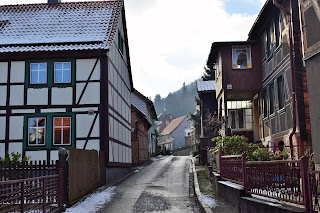 There are a couple of hotels in Ilsenburg, but I would personally be very tempted to see how it is to live in such a heritage timbered house. The prices are more than decent, with the average price for a night in a Ferienwohnung - vacation home - for around 30 EUR. the night. 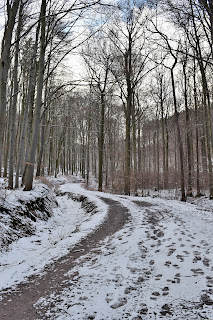 Some of the streets are ending up in the middle of the forest, but the hiking is relatively easy. You only need some normal sport shoes and a bit of walking training, which I both have so I can have another full mountains immersion for the next minutes. 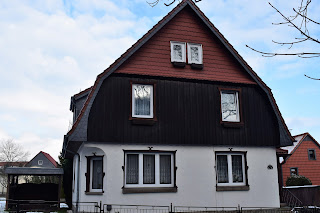 Although silent, the human presence is there, with some architectural modern variations. 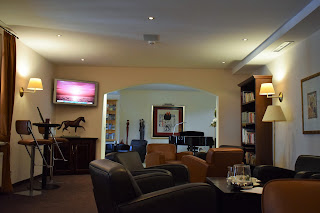 Our next long step is at the other famous local hotel, the 4-star Berghotel, with its stylish traditional-looking lobby. There is another place in Ilsenburg where one can have some bites, the Cafe am Markt near the city hall, but it was very crowded and we weren't so in the mood for a long meal. 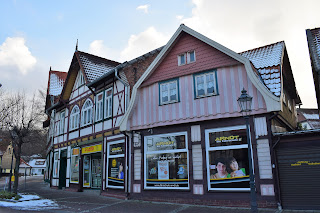 How can I think about food when I've just spotted this cute pinky house in the corner? 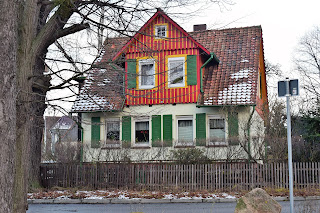 Or this one with orange with yellow stripes on the top? 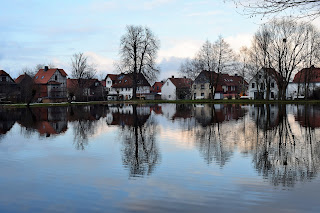 Many dozen of pictures after, we are on the back to the train station. We moved up and down around the city the whole day, but Ilsenburg still stays the same. Ready for a new day, a new week...
Posted by Ilana WD at 11:44 PM