Caught in between the Köpenick with its lovely castle and old neighbourhood, where expats love to go rather than live, Treptow and Lichtenberg, Oberschöneweide is rarely on any radar, including for the locals. No museum, a lot of industrial spaces, the relatively out-of-time former communist neighbourhood, with old grey blocks of buildings, casino rooms and tattoo parlours. Except that as many other parts of this city, it is slowly changing, and getting - at least real-estate wise a facelife. I personally never cared about this part of my beloved Berlin until starting to work for some projects headquarters in some co-working spaces created in a former industrial facility. Week by week, my understanding and knowledge about this area changed and decided to explore it even more. At least for learning a bit more about the recent history of the area. 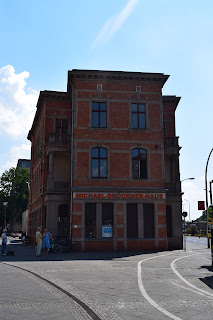 The journey started at the S-Bahn Schöneweide, which is currently under various rehabilitation stages and hopefully will soon look less ugly. It is a typical 'old style' train station which was on the way adapted to some new modern facilities, with elevators out of order once in a while and some unpleasant odors welcoming the visitor. On the other side of the street, the red-bricked Michael-Brückner-Haus named after a former mayor of this neighbourhood, serves as the Citizens' Office. It looks neat and clean inside, the opposite of the messy train station. 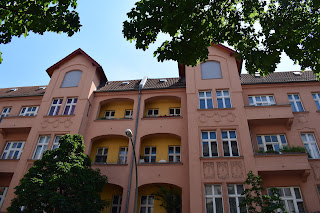 After passing some Indian restaurants - Taj Mahal and Tandoor House, not necessarily authentic, but fully packed given their business hour offer - we wander on Spreestraße, with freshly painted colourful houses. At the beginning of the 20th century, Schoneweide and the adjacent areas were called 'Elektropolis' for the concentration of industries having to do with lightning and electricity, therefore the housing solutions were aimed at offering minimal conditions to the people working in the factories. Nowadays, many of those seem to be cheaply embelish before changing hands to new owners aimed to develop new - and expensier - living arrangements. 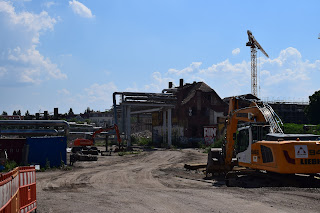 When things are just too bad to be refurbished, they are flattened down and new constructions appear and the fever caught this part of the city as well. Nobody talks too much as for yet because everyone is busy purchasing or investing. 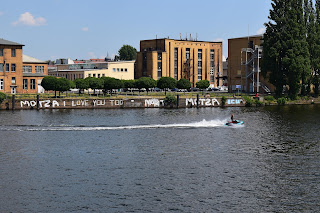 On the rivers of Spree, you can see on both sides, the former industrial facilities that are so much sought nowadays from artists, yoga trainers and doctors too to medium-sized companies hosted in the minimally refurbished industrial workshops. 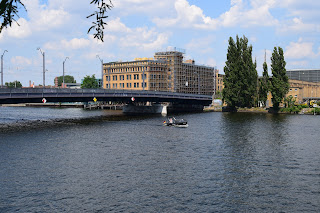 During my around 15 minutes stop at the river, I've counted more than 5 small boats, speed boats, leisure boats crossing at high-speed the area, therefore there is a potential for entertainment too, with the small port of Kopenick, just a couple of bridges away. There is at least one hotel with a view over the river, which makes it a nice accommodation option, also given the proximity with Schönefeld airport and possibly withe much-praise-promised and never-achieved-as-for-now (yes, you were right, I am talking/reading/writing too much in German lately) Berlin Brandenburg Airport. Mostly, there are cheap options, but there is a direct S-Bahn line to the South of the city as well as to the central, touristic area of the city. 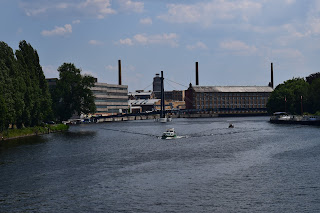 The architectural landscape is overcrowded but the boat traffic brings the human presence around which make things look more warm and friendly. Count also in the summer the lucky Berliners sunbathings on the shores or walking their dogs in the middle of the day. 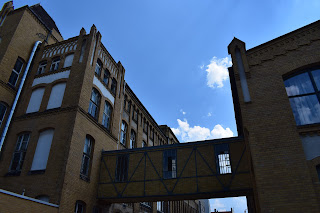 One of the main industrial yards on one side of the Brückerstraße and down on Rheinbeckstraße is Rathenau Halle, with some supermarket, art workshops and music studios already settled. Big part of it is still looking for a destination for its locations. There were some plans for creating apartments, but as for now it is not crystal clear. 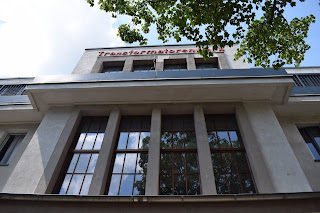 Most buildings are going through various transformations, but some typical industrial headquarters with a simple architecture are still maintained. 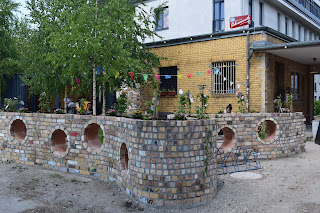 In some locations, the ugly buildings hide funny and gay interior decorations, as in the case of the Café Schoneweile, packed with healthy-conscious customers. 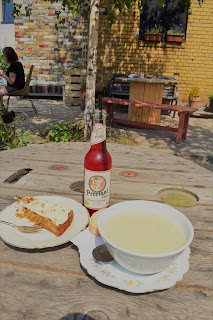 I've gave a try to their lemon soup of the day - never had something so good, spicy and sparkling, with a milky consistence and satiating, before - and a bite of their homemade carrot cake. So bad they don't have lemonade, otherwise they are perfect (and a fast and friendly customer service too, plus a sand corner for the babies). 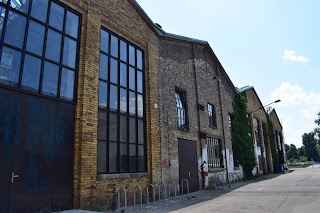 A couple of meters away, one can visit an art collection and some industrial art at the Industriesalon. The hard, noisy work around promises even more surprises, but not sure what exactly to expect. 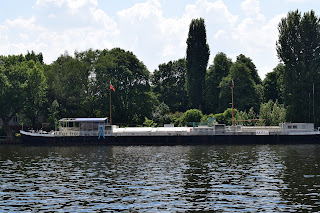 The intensive post-industrial construction activities in this former industrial area are not to everyone's tastes and there are local initiatives pledging for keeping the shores green and free of buildings (Ufer Frei). As the free and fresh air of the city is concerned it makes sense, but some shores in this part of the city can be eventually re-designed to host more parks and walking facilities, while keeping the predominant green lanes. 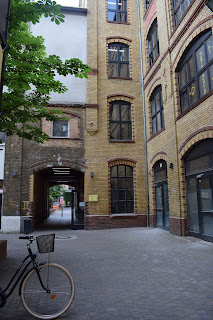 On the other side of the crossing the former AEG Leuchtfabrik (Light factory) on Edisonstraße, in the 1920s the biggest in Europe, is bursting with life too: one wing is under construction, the other is intensively hosting various businesses. 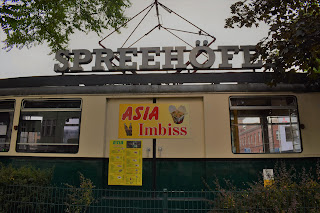 The setting remains industrial, either in the case of the Asian fast-food hosted in an old tram, or the fancy art studios holding photo sessions in rooms with white ceilings crossed by way too many black plumbing and cables. 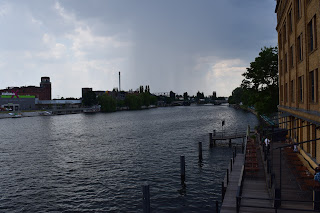 There is even a restaurant with a beautiful view over the river. 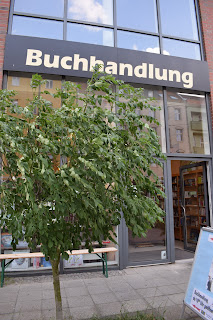 The bookstore near the Edisonstraße entry helps to update the bibliography in terms of local industrial history, with many thematic German books. As far as I've seen, it is the only source of books in the area, with the local library a couple of meters away from the train station. 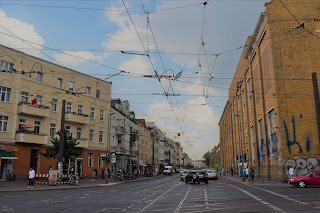 During the industrial times, the crossing on Wilhelminenhofstraße used to separate the living area from the industrial factories, with the tram crossing the street, but nowadays the limits are less clear. The times have changed and like many other places in Berlin, Oberschoneweide is searching for a new identity. 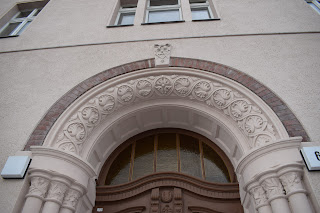 As for now, you can hardly fine other interesting small boutique places outside the huge shopping area near the S-Bahn station and it is hardly too much to see and do. Not too many foodie temptations either, with most of the places to eat being fast-food oriented. But once in a while, you may see some appealing architectural details, but be careful enough to watch your steps, as there are many small streets in process of rehabilitation. 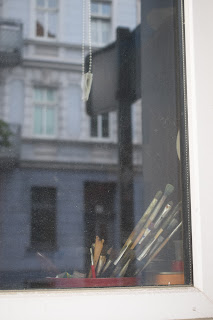 Urban history and maybe a bit more is underway in Oberschöneweide and would love to keep an eye on this area in the near future...
Posted by Ilana WD at 9:32 AM