A Short Trip Guide to Frankfurt/Oder

Since moving to Germany, I visited Frankfurt/Oder at least 3 times, each time looking for a short one-day trip from Berlin. With one exception, it was long before my blogging years, therefore no writing traces of my trip. This time, I am back for creating a short travel guide for anyone with an open mind to see a different side of the former communist Germany. 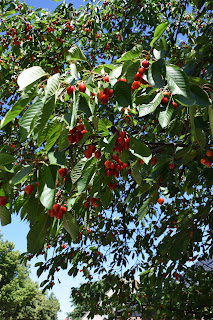 Our first stop after 1h30 train ride from Charlottenburg train station is the picturesque Rosengarten, which looks like a small modern village. It was my stop when I first went to the Wildpark and I am back to visit the open air zoo again. The passageway through the streets is sometimes covered by a natural roof of fresh cherries and the weather is just perfect for spending a full spring day outdoors. 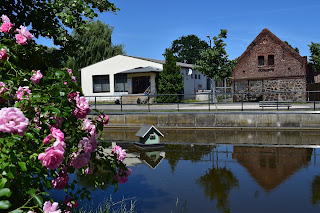 The smell of the roses is filling the air and while waiting the 988 local bus to take us to the Wild Park, we are slowly walking the deserted streets whose quietness is broken only by the screams of the fighting geese from a house nearby. 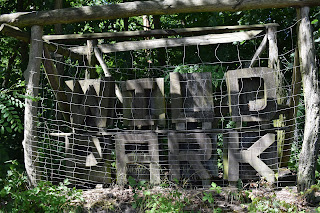 If you not going there by car, transportation might be an issue, as the local bus connecting Rosengraten to the park and further to the rest of the city stops here only hourly. Arriving there early in the morning guarantees a full day outdoors, otherwise one may be careful to check the schedule of the last bus for not being completely lost in thbe middle of the fields. 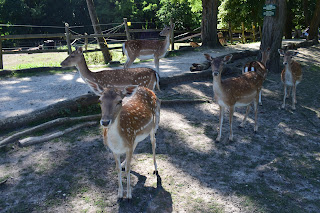 The open-air petting farm and zoo is enchanting enough to make you forget completely about the time. You can walk surrounded by deers that can't wait to be feed, coming along with the residents of the petting zoo and spend all the time in the world actively testing the various playgrounds for various ages and levels of difficulty. 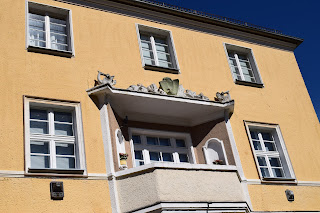 Our time here is short though and after three hours we are heading back to the world of humans, leaving the friendly animals behind. At the first sight, Frankfurt/Oder looks like an extremely worn-out former communist city and the streets and the huge blocks of houses are a constant reminder of the relatively recent past and completely lack of architectural common sense. However, tucked in the middle of 10 or more-storey houses, some discrete traces of a different past remained, memories of a time where the living was more individualized to the status and requirements of the inhabitants, not just boxes of matches. 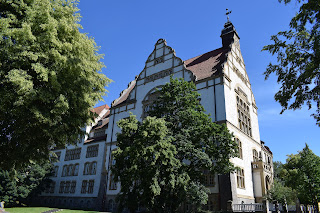 There are even more historical buildings relatively well-preserved, renovated a couple of years after the war, such as the 1903-built Karl Liebknecht Gymnasium on Wieckstraße, still used as an educational institution nowadays. 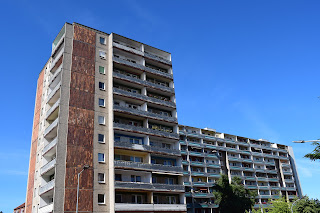 Talking about the boxes of matches, the communist architectural memories are also here to show their contribution to the recent history of Frankfurt/Oder. 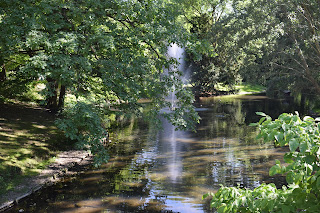 Regardless of the type of housing you are living, you can easily find a retreat for catching up with your own life while wandering through Lenné Park, with its alleys surrounded by green trees leading the walking pathways around the water. 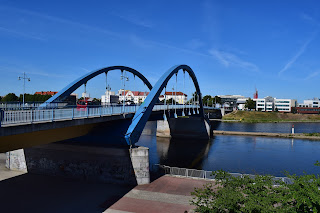 One of the few things Frankfurt/Oder is known outside is for its fast - by foot - connection to Poland. As in the case of Görlitz, you can reach the neighbouring country in just a couple of minutes, by crossing the bridge over the Oder river. For the nature lovers, a walk on the shores of Oder is also a great opportunity to get away from the urban buzz, either by foot or by bike. 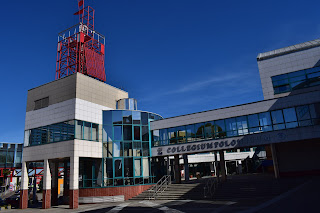 Besides the cheap cigarettes and drinks and other affordable shopping attractions that can be easily found in the Polish town of Slubice, the city also has university headquarters located on both sides of the border. The street and directions in Frankfurt/Oder are bilingual - German/Polish - and the opening of the academic center, which benefits from substantial EU funding, is aimed at displaying an example of post-Cold War openness, with the administrative borders rather a memory than a bureaucratic challenge. 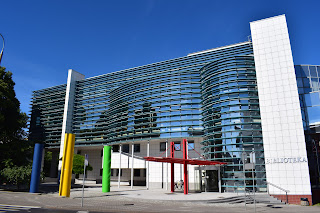 We made a short tour by foot of Slubice, but everything we see has to do with shopping and we are not exactly in the mood for it. Also, you have to change your Euros in the Polish local currency, Zloty. The university buildings are by far the most interesting in terms of modern architecture. 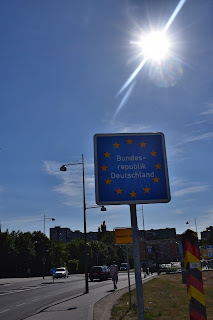 Our visit in Poland was short, as I was very curious to find even more touristic attractions of Frankfurt/Oder. 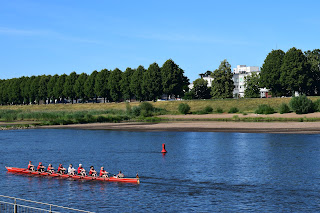 Oder looks to offer many options for outdoors and sport lovers, with waters sports looking as a very attractive option during the summer days. From canoes to water skiing, or just walking your boat through the water, all you need is only the right gear and the skills. 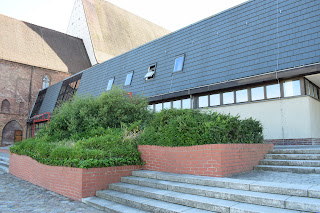 In the immediate vicinity, the music lovers are invited to the Concert Hall, situated very close to the music school. From my first trip, I still have the memories of walking a small square near Oder surrounded by trees, with the sound of music filling the air with a special out-of-time feeling. If you are looking for a special meal with a view to Oder, Panorama restaurants guarantees an unique ambiance to a lavish meal. 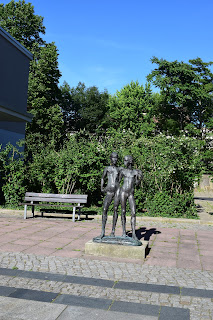 The Karl Marx avenue is currently under construction, and displays - like Frankfurt/Oder in its entirety - a mixture of new and old historical layers and influences, which can be also read through the shops' windows: some of them display garments that for sure were very much in fashion during the shining years of the Honecker Regime. Some artistic presences brings a bit of dynamism and creativity to the streets. 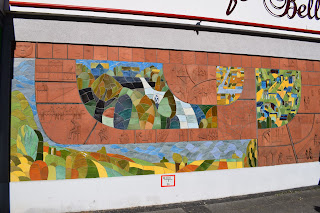 From classical statues to some realistic wall mosaiques, there is enough to make you think a little bit about arts and why they are sometimes important to go out of the classical exhibition closed spaces for adding a different note to the public spaces. 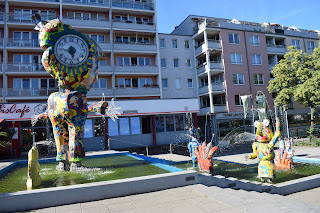 The hilarous constructions near Lenné Passagen are even more playful and make you think at a commedia dell'arte show. 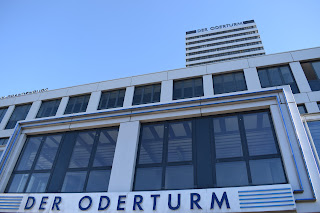 Inaugurated in 1976 after eight years of construction, Der Oderturm is nowadays partly hosting offices with a higher-end shops at the ground level. Renovated for two years between 1992 and 1994, it is a classical example of GDR architecture which integrates pretty well within the new capitalistic urban realities. 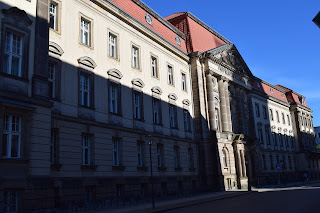 Viadrina University has one of the most classical constructions in Frankfurt/Oder, displaying a typical university architecture. This high-ed institution was here long before the GDR and nowadays has a strong European and humanistic focus. 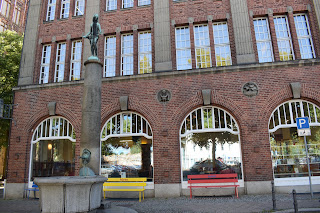 The Marktplatz with its cobblestone side streets is an example of old architecture, another oasis of old times. 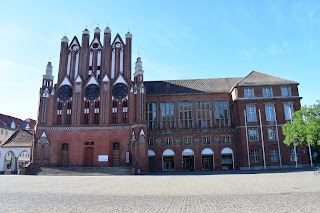 The red-bricked architecture of the city hall reminds of similar constructions in the area of Brandenburg, and even far away North, in Greifswald. 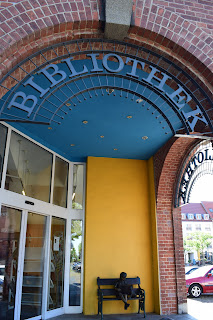 The local library looks like an interesting place to explore too, at least if you take the entrance. I would have been curious to see what books are of interest for the inhabitants of Frankfurt/Oder but it was shortly before the closing time. 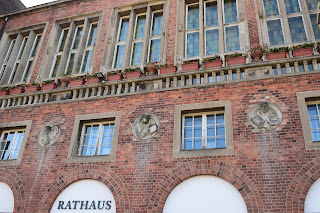 Near the city hall, there is a museum of modern art, regularly hosting exhibitions of German artists, a good opportunity to connect with the local artistic trends. Another entertainment opportunity for the short-term visitor is booking a ticket at the German-speaking theatre or kabarett. I personally never been to one in Europe - only some political ones in the USA - so I would be curious one day to check the German offer. 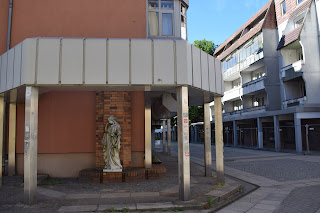 Somehow lost in time, or out of it, a classical statue is lost in thoughts at the corner of Schmalzgasse. As there was no historical mention of the construction that was there before the ugly blocks of houses, we can only guess about a glorious past that was part of the history of this well-wrapped classical beauty. 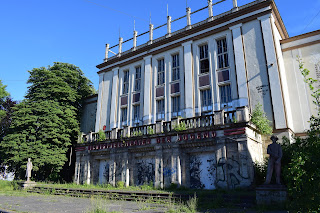 Too many questions and not too much time left. On our way to the train station, we stop in the front of a former communist cultural institution, as for now, with an incertain future. With its many far and recent past secrets, Frankfurt/Oder would be an interesting place to visit again in the near future. Maybe to connect with its people too and connect more dots of its histories as well.
Posted by Ilana WD at 11:14 AM