How to spend one day trip to Greifswald

A city with a rich university history - the student life started here in the late 15th century - where the famous Romantic German painter Caspar David Friedrich was born, Greifswald is very often off the travel radar. After some serious documentation during which I noticed the complete lack of serious sources in English, I decided to take the challenge to spend, for the beginning, a full day exploring this relatively unknown place for the usual English speaking visitor in Germany. 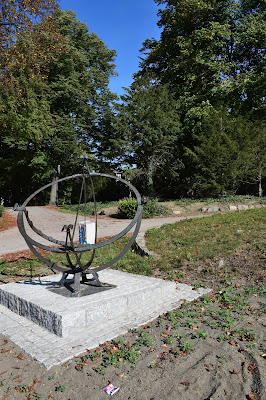 From Berlin, the direct train ride takes three full hours, covered by the 44 EURO Quer- durchs-land Deutsche Bahn ticket. It is quite a lot of time, but looking through the window the time went faster: enchanting yellowish plains with round-shaped ponds and cows looking long at the train. Once arrived, we crossed the quiet park in the front of the central train station. In just a couple of minutes we've found out that Greifswald used to be part of the Jakobsweg, the main pilgrims route in Europe going to Santiago de Compostela. It also has a special route covering the places connected to the history of Caspar-David Friedrich, from the buildings where he lived to some of his sources of Romantic inspiration, including an information center fully dedicated to his works and activity. 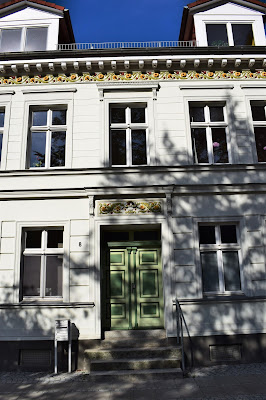 Around Karl Marx Platz, I fell in love with the beautiful two-colour or rich decorated doors, that will be my main photographic motif during my trip. Regardless how uninteresting a building can be, a beautiful door embellishes everything. 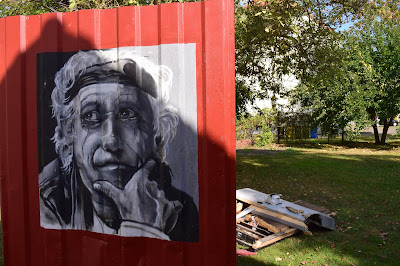 As an university city, Greifswald is provided with a lot of inspiration and fresh perspectives, hence, there is no wonder that the street art has its special headquarters. I discovered a yard surrounded by graffiti completely by accident, on Wollweberstrasse. 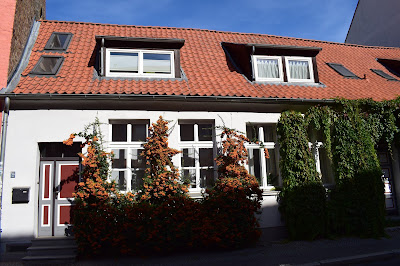 It is the very beginning of autumn and besides the colourful doors, the vegetation is adorning the houses, ready to change the cover every single day, until complete disappearance. 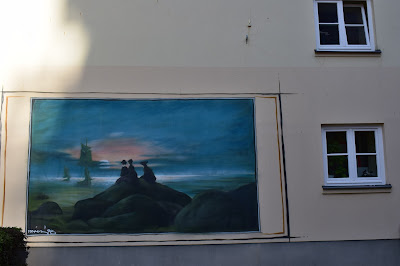 The more I was walking the streets, without a map and without a list of places to see, the more I am surprised by my discoveries, like this Romantic street art corner in the manner of Caspar Friedrich, close to Rubenowplatz, near the university headquarters. 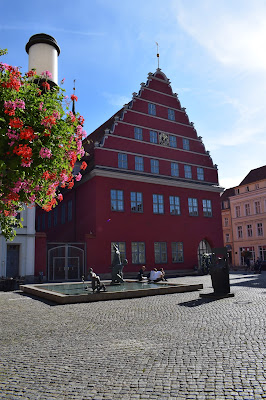 Greifswald is often mentioned as an example of Brick Gothic architecture, a style specific to the Northern Europe, characterized by the use of stone for the main construction works. 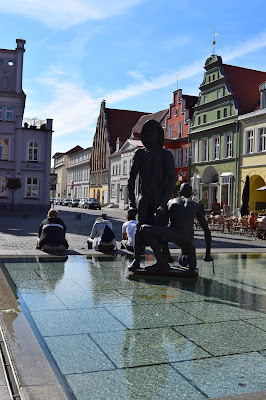 Baderstrasse, for instance, offers a beautiful perspective of this style, the houses being renovated and painted in colourful pastel shades. Many coffees and bakeries are open on Sunday and if you are lucky enough to travel on a sunny day - as we were - your eyes are rewarded with a pleasant view of architectural harmonies and colours. 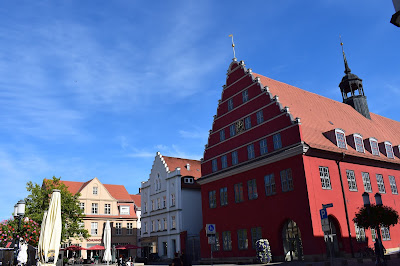 The apparition of Brick Gothic was dictated by the basic construction needs: the area was not very rich in other materials. In Germany, the same style can be encountered in Lübeck in many other Hanseatic cities or in Brandenburg - but in a more ugly, raw variant, without too much decorations, but also in Lithuania, Estonia or Poland. At the end of the 30-Year War, at the end of the 17th century, Greifswald entered for almost 200 years the Swedish rule whose presence is still noticeable in the architecture. 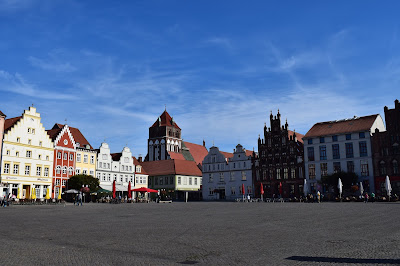 If you have a look at the buildings around the main square, you can see not only different styles, but also various historical layers and outside influences. 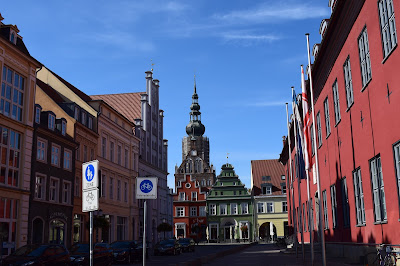 So many differences but still the unity of a common local history. This area can be easily walked by, but you can also take your bike with you and explore the entire area on two-rows. 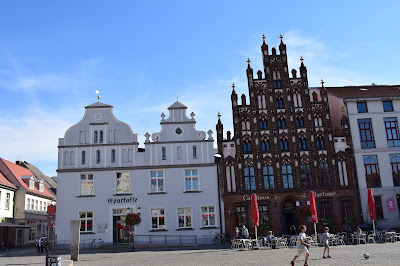 The complexely segmented facades are usually complimented by specific doors and entrances, and interior staircases which keep the balance of the volumes. 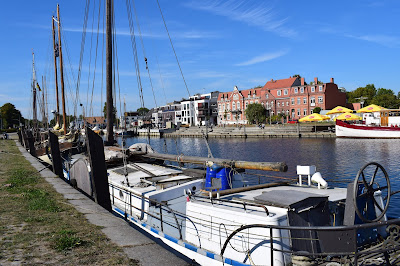 After so much architecture, the port at the river Ryck is the natural oasis, with its stylish boats and another view into a different construction style. Many of the boats also serve as restaurants offering mostly fish-based meals and cold beers. I was curious to find some tempting Fish&Chips options, but I soon discovered that there is nothing but the usual supermarket frozen food, soaked in the oil used more than 5 times, so I better skip this curiosity. 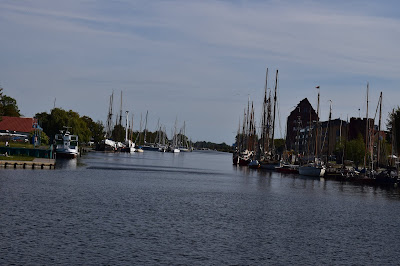 Although the loud music of a nearby circus was breaking the relative calmness of the day, the quiet waters are soothing enough after a busy week. Bikers can enjoy longer routes around the river, leading to an even more intimate natural environment. 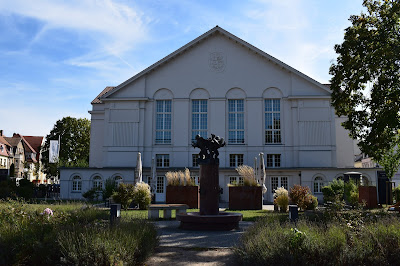 The German-speaking visitors can explore more than the architecture. There is a local theatre with a modern repertoire and the house where the writer Hans Fallada was born can be also visited during the week. 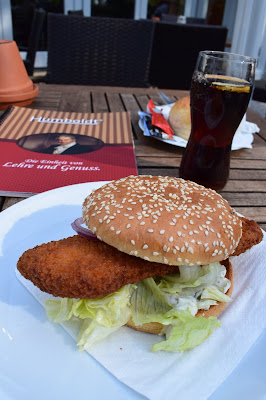 The foodie stop was at Humboldt im Logenhaus, for an average delicious fish burger served outdoors. The good fast service helped me to refuel and be ready for the last legs of my trip. 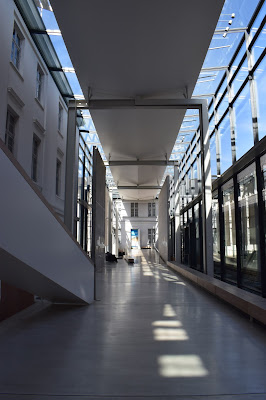 The Pommersches Landenmuseum covers extensively different historical periods of Greifswald. In more than one hour spent there I was able to learn about the very beginning of the settlement, since the migration time, until the time of the Swedish occupation. A photography exhibition displayed the history of different buildings, and was interesting to notice local people trying to remember how it was during their childhood or school years. The painting collection is worth a look too, with an impressive overview of the Danish painting school, plus the works of Caspar David Friedrich, but also Vincent van Gogh or Emil Nolde. Shortly, in this place you can learn about the history and culture of Greifswald and Mecklenburg Vorpommern at a glance. Most explanations are in German, but there is are also English guidance, enough to understand the main aspects. 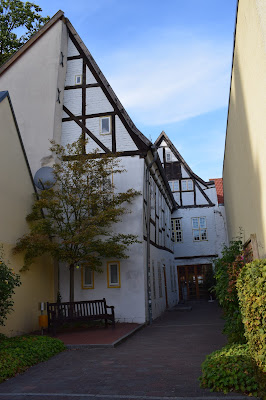 Overloaded with information, but with the happy feeling of having used my time at its best, I have a last view of some secret mews and colourful doors before returning to Berlin. It's a pity Greifswald is so less known, but lucky me to me curious enough to dedicate one full day to a completely unknown destination. The secret gems I've discovered here encourages me to keep exploring even more German destinations. Stay tuned! More to come soon!
Posted by Ilana WD at 2:04 AM