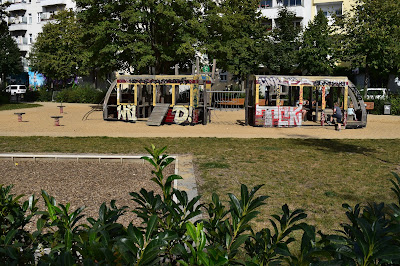 As I often travel around Berlin, it happens to pass very often near Ostkreuz Berlin neighbourhood by train speed, but I never dedicated enough time to explore it properly. The many colourful walls or the glittering sea that you can see from the train were tempting enough to make me spend one full day walking its streets and taking as many pictures as possible of the most interesting corners. But before doing this, I had to find my way through the relatively complicated maze of the Ostkreuz train station... 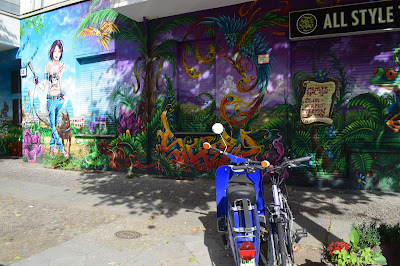 Once out under the late autumn sunny sky, I made the tour of the big park on Matkowskystrasse, discretely observing the ping-pong competition enfolding, trying not to disturb the youngsters laying on the pavement with their bottles and loud music on the side. Open air party? Anyone is invited today. 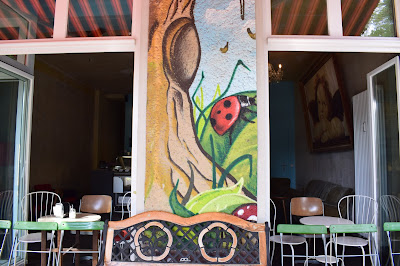 To keep the spirit up, the colourful walls bring life to the many dilapidated entrances. It is weekend and people hurried up out of the house, enjoying the rich food opportunities lined on Lenbachstrasse, from icecream parlors to small restaurants or the home-made food from Zebrano Velicious. 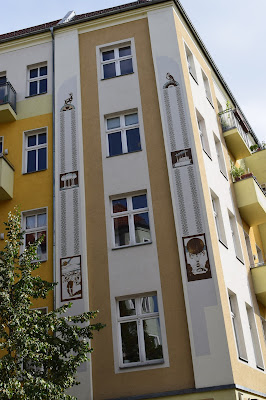 If you raise your eyes, you can see some interesting decorations on the highest buildings, and if you are looking for some cultural entertainment, there is even a theatre Vebereck. Tourists discover the area together with the locals, using the relatively cheap accommodation available here. As the area is connected through S-Bahn to the main city attractions, you don't necessarily need to pay for a central location. You can use the money for more interesting things, like trying the foodie attractions on Neue Bahnhofstrasse: from a falafel kiosk to a Vietnamese pho or vegan cakes, you can have a tour of the world in a couple of dishes. Burger Ring offers even a hummus burger, if you are interested in some fusions. 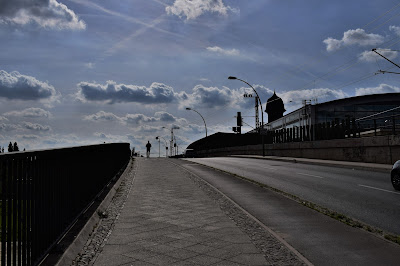 Keeping in mind all these destinations for later in the day, I continue my wandering around Ostkreuz, and in my effort to make connections between different areas, I am crossing the Boxhagenerstrasse, the fancy Friedrichshain avenue not only for food, but also for alternative stores and fashion. After all, I am not completely new in the area, it seems. For now, I am walking direction Lichtenberg, crossing the bridge over the train station lines where, as usual in Berlin, intensive work is going on for repairing or extending the train lines. The beautiful sky compensates the view of the ugly construction site, but I am trying to go as soon as possible on the other side of the huge bridge crossing a, as for now, no-man's land. 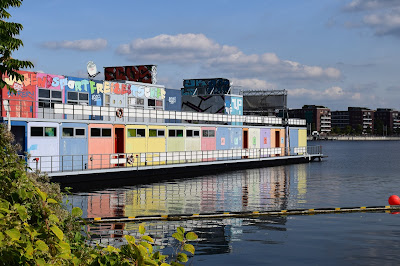 Ten minutes later, there is a different landscape waiting at the other end of the bridge. First, you have a lot of green and clear waters, as I am landing now in the Rummelsberg part of Berlin. Second, there is a new born view of Berlin, that you can often encounter when visiting former communist areas: the new Berlin architecture, of black and white buildings with Perspex balconies, rows of identical squared buildings. 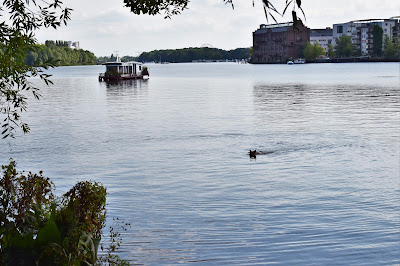 You can still find remnants of another era, like a former swimming complex abandoned now, or a party boat, but the landscape is changing little by little into a very modern, and I suppose expensive too, residential area. 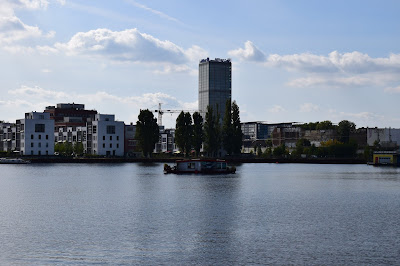 If you are bold enough, you can rent a kayak for your own tour around the lake to observe closer the new realities. As for me, I am using my time for touring the park, together with the other families with children, with or without bikes, that choose to spend their weekend outdoors. The Rummelsburgersee is a beautiful and calming background, and you can feel the new vibes everywhere. Ostkreuz, as many other places in Berlin, will change a lot in the next 2-3 years. 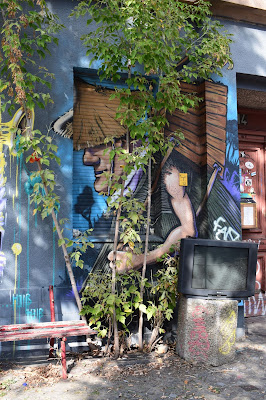 I continue to notice the messages of new beginnings for this area, further on on Hauptstrasse, a street crossed by fast yellow trams. The other neighbour close by is Köpenick, which I visited several times since moving here and which I've found interesting for the mixture of old culture and picturesque nature. Once on Nöldnerstrasse, one feels back in time, a couple of decades back our current 2016, in the middle of old buildings, embellished only by creative street art. 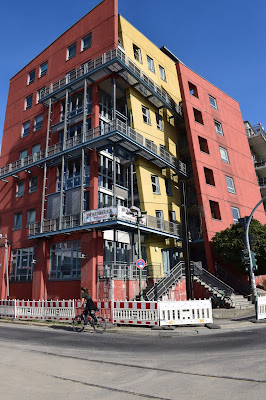 One of the building I've seen often from the windows of the train, and was always intriguing for my inner architect lover, is situated at the end of Nöldnerstrasse. A social building, created by the optical illusions of the covering panels. Viewed from the train speed the effect is more spectacular, but even from closer it creates an interesting perspective, although the choice of colours is not necessarily my favourite. 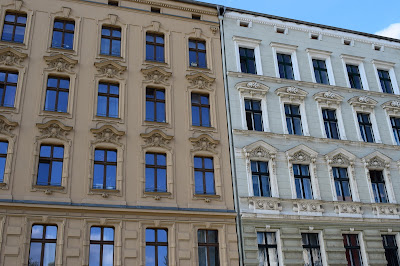 Besides the feeling of new and change that you can feel in the air, Karlhorstrasse breath differently, with its laced-like decorations of the facades. The impression continues on Turmschmidtstrasse, where you can also see some Art Nouveau designed signposts. The bookstore Paul+Paula looks like a cozy place to spend some time during the winter, followed or before some snacks at Brot und Küchen (Bread and cakes) on Pfarrstrasse. 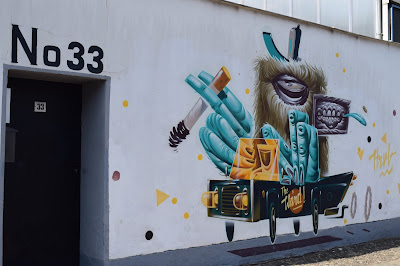 There is another reason why I decided to cover extensively the Ostkreuz neighbourhood today: its special kind of street art I've read about and spotted during my train rides too. There are no specific directions helping you to find it, and after a lot of walking during which I was almost sure that I might skip this part of the program, I was lucky enough to discover one of most colourful streets of the city. 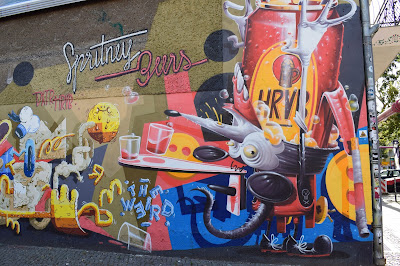 The attractive and creative art - half-way between dream and utopia -, as elaborated as any piece of art you can find in a museum, is colouring the ugly walls and weed-invaded streets of Tasdorferstrasse, Wiesenweg or Wartenbergstrasse. Most streets are either abandoned or hosting car repair stores, not a good idea to visit it at night, but if you want to see the spectacular street art, you should visit only by day. 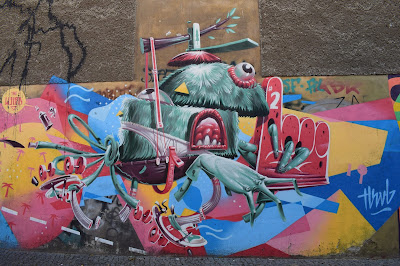 In some cases, the art is so elaborated, that I wish I can keep in my mind as many features of the style as possible, for being able to recognize him - or her - later on. I can resonate with the irony and the magnifying glass through which some of the contemporary realities are perceived. 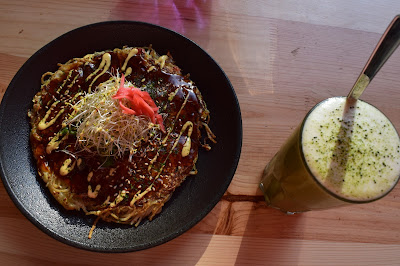 The day was pretty exhausting, with many different things to see and discover, and a lot of non-stop walking and search for the best photographic angle. For my well-deserved lunch, I have a stop at the newly open Harapeco on Neue Bahnhofstrasse for some Japanese original food - forget the sushi, please, this is for first-time tourists! I am happy to test their noodle okonomiyaki, a specialty originally from the Hiroshima area, a savory pancake grilled, with various ingredients you can choose yourself and soaked in a special sauce. In Japanese, okonomi means how you like it, and yaki - grill. In a free interpretation, a grill of your favourite ingredients. The prices are middle, but they really deserve it: it tastes delish, and the sauce gives a particular taste that you can hardly identify with anything else you had before. The matcha latte accompanying my meal was also well done, with the special taste of green tea maintained despite the milk addition, which is not always the case in the local variants of this beloved drink. 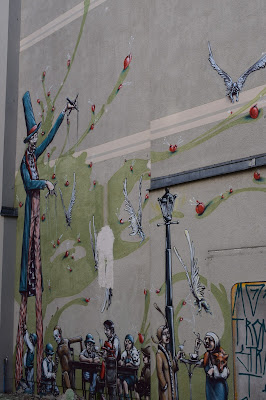 When time has come to leave Ostkreuz, ready for a new adventure finding my line at the train station, I am happy that I made it through this area, step-by-step, just in time before tremendous urban changes are about to take place in the area. I wish I can make a tour in the next years, but I hope at least some of the foodie places will remain unchanged or at least, will get even better.
Posted by Ilana WD at 1:03 AM