What To Do on a One-Day Trip to Dessau

It is no secret that Bauhaus is my favorite modern architectural movement and I intensively covered  some relatively unknown examples of works belonging to it on the blog from Berlin and abroad. This year celebrates 100 years since the creation of this school by Walter Gropius, in Weimar, and several activities are taking place around the country, offering interesting overview about an architectural style that left traces as far as Mexico, Morocco, Romania, Russia or Israel.
Shortly after moving to Germany I visited Dessau, where the creative center of the movement was relocated between 1925 and 1932. I was in awe for being able for the first time to have a direct contact with the roots of the architectural heritage I was theoretically familiar with through the discussions and works of the architects in my family. Since then, I kept tracing the history and works of Bauhaus through my travels, which goes beyond the narrow architectural limits, following Gropius' motto: 'Thinking the World Anew'. It meant that the technical, scientific and human evolution required a completely new vision, out of which habitat was only a small part of it. The members of the Bauhaus school were learning not only about measures and drawings, but also about music, painting and theatre, building the basis of an architect with a complex, Renaissance-que Humanistic formation (building).
Curious to revisit some of the places of that 10-years old trip, I visited Dessau again, refreshing my memories and my photo archives about this place too and eventually searching for new things worth to see on a one-day trip. 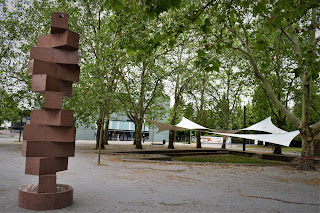 Dessau is two hours away by train from Berlin. With the Brandenburg ticket a two-way ride costs 31 Euro. Once arrived at the train station, it is hard to miss any important milestone of the usual Bauhaus tours, as directions to the most important attractions are clearly offered to the visitors, both in English and German. 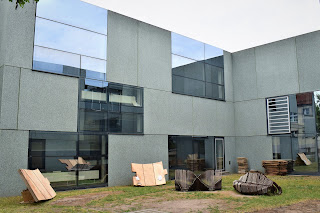 I simply follow the - how predictable - Bauhausstraße - where since my last trip identical detached cubic structures following the style of the architecture are now bordering the main street. 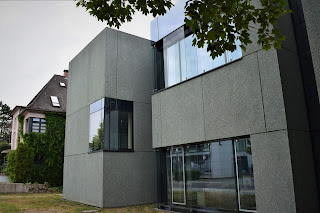 The massive yet simple cubes used as living spaces or meeting rooms are maintaining the same height with the older buildings and although probably covering the same surface, their heavy presence is more noticeable and at a certain extent intrusive. It looks like the private space of the housing is nonchalantly invading the public area of the street, and there is no need of a fence to delineate those two dimensions. The first important stop is Stiftung Bauhaus. Inside and outside the building, the space is cramped by individual visitors - as me - or groups following their multi-lingual guides. 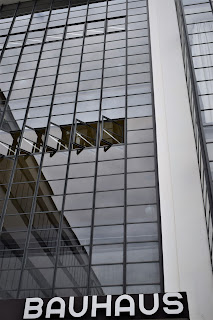 Here, you can have a complete overview of the scholarly activity of the movement, as well as of the specific works of its members. It is a valuable source of information therefore it requires a couple of good hours put aside in order to overview the numerous details. 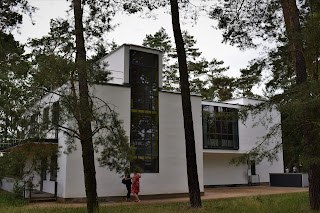 Another part of the Bauhaus tour is the Masters' Houses. Included in the UNESCO World Heritage since 1996, it refers to three pairs of identical semi-detached houses of interlocking cubic structures made of prefabricated components. Each house has its own wall painting shades which beautifully interferes with the light embracing the interior through the vertical strip windows on the side. Indoors, one can learn even more about the movement, through the works of some of the famous residents that developed their work while living here for short periods of time. Among them Paul Klee, Wassily Kandinsky, Moholy-Nagy, Lyonel Feininger, Oskar Schlemmer or Ludwig Mies van der Rohe. 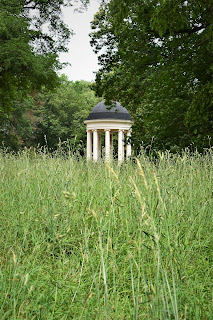 Once the intensive Bauhaus tour finished, I am curious to discover other interesting parts of Dessau. For instance, Georgium Park, which is full of families of locals enjoying the hot summer days in the shadow of classical ruins. 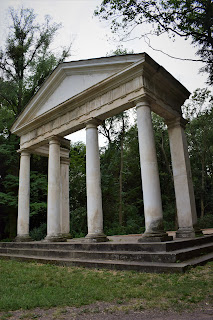 Considered one of the largest landscape parks in Germany created in the 18th century, it offers to the visitor a classical version of a walking tour with historical motives. Practically, through the wandering in the natural environment one might be focused also on the human element represented by the buildings reproducing classical Greek-style ruins. The eternal power of nature meeting the short-lived human experience. 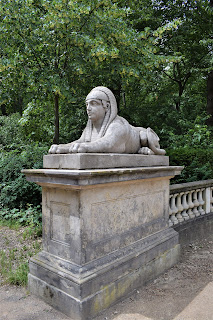 I have no idea how the contemporary visitors related to the classical statues and their meanings, but they looked as a happy bunch of people looking to entertain themselves, regarding the heavy symbolism surrounding them. For the children is even more entertainment at the Tierpark nearby. 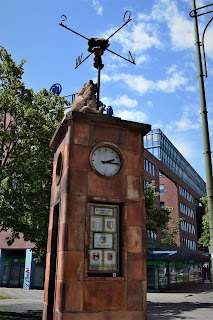 The city is breathing hard under the massive heatwave. The more I am out of the Bauhaus comfort zone the least references about this movement seem to be left. As in many cases of cities that went through various historical transformations, and reading through different layers is an interesting experience. 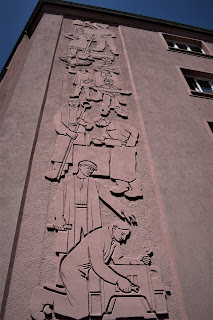 During the Cold War, Dessau was part of the communist Germany and the heritage of those times - not necessarily connected with the Bauhaus past - are easily read on the facades of the houses aimed to show a clear propagandistic message to the emerging working class. 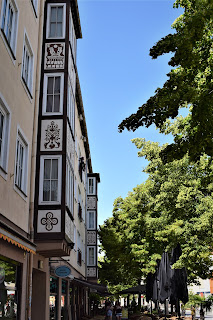 Popular motives typical for the Anhalt region were also added to the outdoor looks of the buildings. 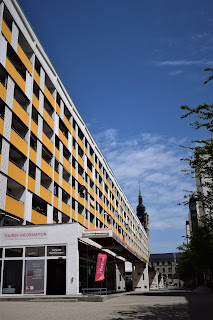 For the housing construction plans though, it looks like a cheap variant of Bauhaus style was maintained, as it actually answered the needs of an increased population and family housing requirements. 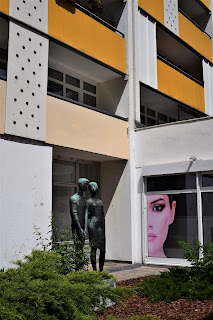 Tucked in the shadow of the uniformity, some stone display of intimacy is a message that real people are living behind those pre-fabricated doors. 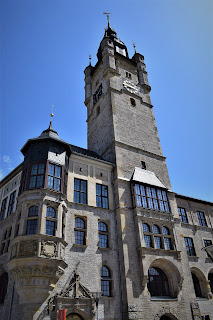 Another interesting example of architecture is the old city hall, a classical construction built in 1910, in a style which reminds, among others, the structure of the Otto-Suhr Allee City Hall in Charlottenburg, Berlin. So bad I visited Dessau during the weekend therefore it was not possible to have a look inside the building. The 73-meter tower is considered the highest in the city and from the top of it one can have panoramic view over the entire area. 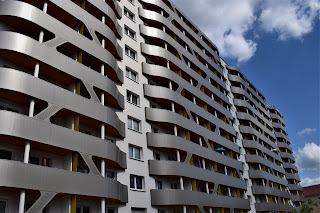 At the end of a relatively busy day in Dessau, it is time to ask if there is more to see here besides the Bauhaus heritage? After the unification, it seems that the city rebranded itself exclusively around this concept and most of the attractions are listed under this key-word (there is a Dönerkebab am Bauhaus, and most of the art and stationery stores do have stylish Bauhaus-style letterings).
Which is not a bad thing, as you can easily browse here the professionally organised archives of the movement. Most probably would be curious to come back again one day searching for a different cultural overview - and maybe to find some decent restaurant options as well, as after a couple of good hours of wandering it was almost impossible to find a place serving some edible food, except an icecream place that served more than 3-year old cakes - but as for now a visit to Dessau for Bauhaus fans and curious is more than recommended.
Posted by Ilana WD at 4:00 AM