A Short Hiking Adventure in Kleinmachnow

We are already half-July and it seems that summer is running fast, faster than my travel plans at least. Regardless if I am enjoying the summer in Berlin - which is always a lovely experience - or taking random trips around the city for the weekend - more about this in the next two posts - I still some more German travel plans in my pocket.
One will be in a couple of days an exploration of the iconic Sächsische Schweiz, near Dresden - and not only because it has the same 'Switzerland'/'Schweiz' in it. I am a big lover of hiking in the mountains as since a very early age - somewhere near 5 - I was took to long trips in the mountains with my family.
Spending a couple of long hours the day on my chair does not help me being prepared for such an adventure and although I am trying to keep myself a regular gym program I need to get ready for long and eventually challanging walking and hiking journeys.
When the forest areas around Berlin - like Schlachtensee, Krumme Lanke, Nikolassee or Grünewald . are no more attractive enough for my wandering spirit - a short adventure to places like, for instance, Kleinmachnow, are worth a try. 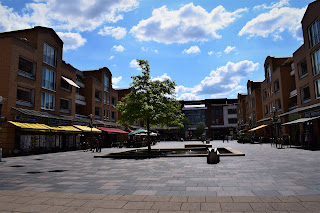 I've been to Kleinmachnow four years ago, when I was rather interested in the recent history. Caught between Potsdam - which belonged to the GDR - and Steglitz-Zehlendorf - formerly part the American sector - it used to be a relatively isolated locality on the Cold War map of the area. After the fall of the WWII, Kleinmachnow was frequently mentioned in the media of the 1990s for the drama following the property restitution cases. When the locality was assigned to the communist Germany, many residents fled and abandonned their houses that were took over by locals or representatives of the Communist Party. Once the Berlin Wall was down - during the Cold War here it was a massive border crossing checkpoint, similar in importance with the checkpoint Bravo situated on the A115 motorway - those original owners or their inheritors wanted to recover their properties and often it was not possible without struggling which turned also violent once in a while.
From Berlin, you can arrive there either from Krumme Lanke, by bus, or from Grunewald, also by bus. My stop was at Rathausmarkt, where you can find all the shopping and eating facilities in Kleinmachnow. The offer is modest but enough if you just want to spend the day in the area, without leaving for Berlin. The Italian restaurants are just fine and there is even a bookstore selling the latest popular titles. 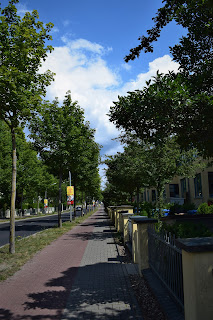 After a relativel short refuel shop for a short lunch meal, we are slowly walking alongside the Förster Funke Allee, with its identical one story blue houses, with discrete decorations on the window seals and small gardens embelisshed by blowing bushes of white and pink hortensias. 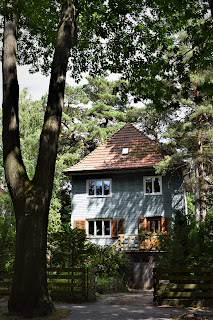 The more we walk, turning on Karl Mark Street, for instance, I have the confirmation why Kleinmachnow is considered such a paradise for real estate. Despite the persistence of a relatively confuse property rights situation, people keep buying and selling here, including expats, and during our short stay in Rathausmarkt we already heard three English-speaking locals. The houses are really beautiful, with generous garden space and covering a variety of architectural styles. 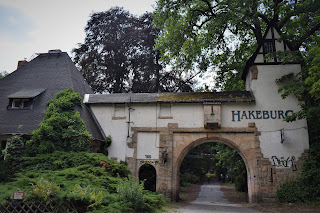 I wanted this trip to be nothing but of pleasure, but it rarelly happens in my case, as I cannot avoid historical and political references. I am in the front of the entrance to Hakeburg, a castle built at the beginning of the 20th century in neo-Gothic style by the family von Hake who owned it. Used by the Reichpost during WWII, and after took over by the German Communist Party - SED - it was later used as a guest house where special guests of the Communist Germany, such as Nikita Khrushchev, Yasser Arafat, Fidel Castro or Mikhail Gorbachev were hosted.
I make a mental note to come back again in autumn to check the situation of this building - but that's all for now. I need to focus on my actual hiking priorities.

Which hiking opportunity is opening generously on the opposite side of the street. There is a protected nature area, where I am supposed to encounter many special birds, and almost empty. For over an hour, I am wandering through the trees, many of them falling down on the grown, with no other human in sight. It is a relatively easy hike, and my simple sport shoes are enough. It's all I need for now, a fresh air, a little walking accompanied by the birds chirping. 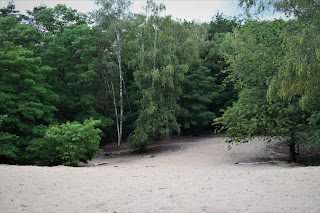 Suddenly, I am entering a sandy area. A sea of white sand without sea, surrounded by high trees. I've seen another one in Grunewald area and visually at least, it creates an interesting diversion, especially if you use hiking as an opportunity to keep thinking on and off without necessarily a direct connection to the environment. It is a pleasant surprise after all, and it makes the walking experience even more challenging. 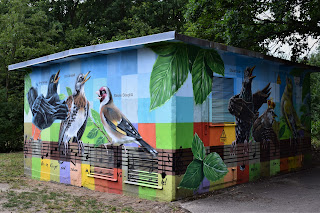 There are many possibilities of hiking in Kleinmachnow for long hours. You cross the street and you are in the middle of another small forest. Some do it by walking, as me, others prefer to bike. For all, there is the offer of comfortably easy tracks, that do not require a special preparation. But it can start as a preparation for even longer and more difficult tracks. 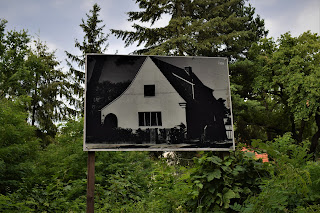 Without noticing and not necessarily looking for, we are back in the urban area. We noticed that in the front of many houses, there are small banners where protests against the property situations are scribbled. One complains that he/she is homeless now although it is the right owner of a house here, another one is just writing down a protest against real estate sharks. Some just set up a magnified picture of the property as it once stood. 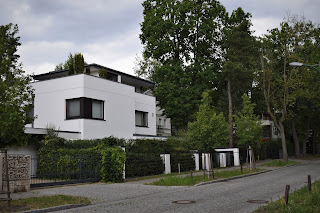 But for the rest of the residents - more or less local by birth -, it is life as usual, the the layers of various urban styles and interventions can be read at once, on the same street page. This visit to Kleinmachnow made me even more interested to delve a little bit more into the recent history of the place, but first and foremost, it offered me a well-deserved hiking opportunity that I promise to use it at least one more time in the very near future.
Posted by Ilana WD at 2:07 AM