Less than one hour away from Berlin, there is a place that resonates a lot with classical music lovers in the capital city and Brandenburg: Chorin Abbey. This former Cistercian monastery that underwent secularisation in the 16th century is a noteworthy meeting point for all those in love with a good classical concert.
Between 22nd of June and 25 of August, here are taking place every Sunday, in the afternoon, around 2 hours of quality music. Some are listening from a comfy place inside the monastery concert hall, some prefer it outdoors, on their blanket while having a family picnic.
A tradition for over 50 years, I made it there only the last week. As usual, my one-day trip involved more than music, and only opened the eyes and the appetite for at least another adventure to come in the next weeks. 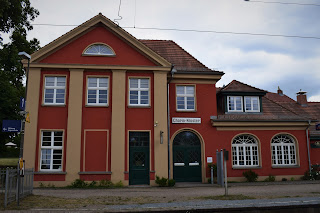 Reaching Chorin is relatively easy and all you need is a 13 Euro ticket, plus a short commuting from Bernau (b.Berlin). For the first time in a long time, I was welcomed by a train station which looked a bit different than the usual derelict buildings I've been used to in the last trips. Nearby, a bike parking place, as the area is a favorite destination for cyclists from around the area. 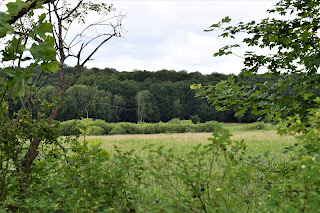 Outdoor activities are encouraged by the pristine nature surrounding Chorin. I was relatively familiar with it when I went to visit the Schorfheide natural reserve a couple of years ago. The abundance of green adds on to the sense of calm that breathes the streets. Pretty houses hiding behind colourful flowers with hardly a car on the road, the perfect rural retreat not too far away from the urban life.
For the guests of the classical concerts, there are buses taking them for free from the train station, with return hour after the concerts are over. Otherwise, one can slowly walk the little bit over 2 km. walk to the Abbey. It is an easy ride, and all you need is comfy shoes and the moderate preparation. 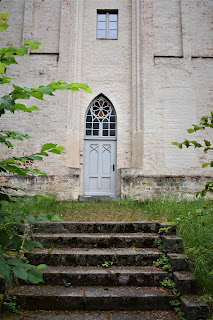 We arrived at the abbey from the backyard, meandering mysterious doors and hiding places. As it is less than 30 minutes before the concert start, there are plenty of people taking the chance of some fresh breathes of air, but there are still enough remote areas where you can hardly meet anyone. 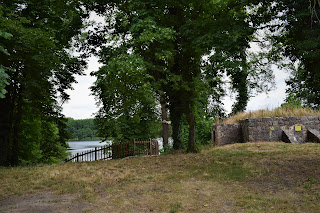 The ruins are taken over by the nature and the human intervention was only for allowing the visitors an easier ride, by setting up stone stairs and bridges. 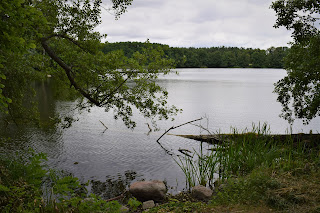 Before of after the concert, a round walk around the Amtssee is a mind-soothing experience. It takes around 2 hours of slow walking and it is worth the experience of pure enjoyment of moderate wilderness. 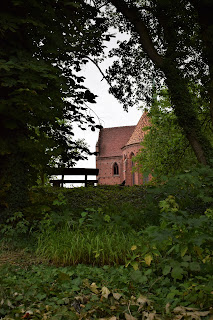 The red-brick building, a trademark of the Cistercian Gothic architecture, the monastic order the abbey belonged to, are making an appearance behind the lush vegetation, and now I know that it is time to head back to the concert area. 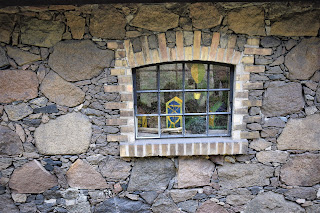 There are so many temptations around, including a very old restaurant and some beer gardens, but I promise myself to be back in a couple of weeks for a full tasting of Chorin, plus an overview of the many art galleries open in the area. 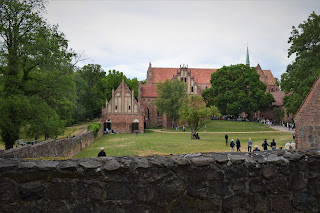 But people are hurrying up for the music event and I am following the crowds. The tickets for the summer concerts can be purchased other online, or on the spot. The number of places indoors is limited, but for outdoors - our choice, which costed 8 euro - you can have it any time.
The sound is as good as inside, and unless there is some threat of rain, you can fully enjoy the experience. At the entrance, there are many food stalls with various treats - a bit overpriced, but this is the price you pay for some good bio goodness, it seems - so even if you did not bring a heavy basket with you, you can have some small guilty pleasures during the concerts. 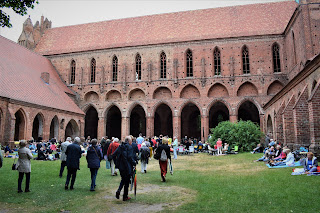 I often asked myself how in Germany it is possible that even though there is a massive amount of people everyone is so quiet. Like a mass of voiceless bodies are moving slowly in a perfect pace, but without the need to utter any sound. 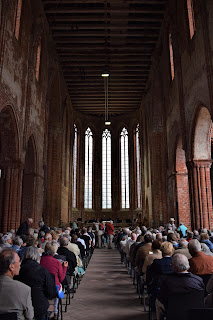 Indoors, everyone took its place and are waiting for the performance. The guest orchestra this time is from the neighbouring Polish Szczecin, and it plays a classical mix which includes also Mozart. Since its creation, the abbey was an important player in the relationship with the neighbouring Slavic territories and nowadays, several German-Polish projects are developped in the area, many of them focused on cultural dialogue. 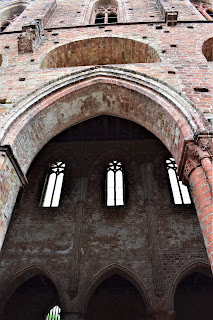 Although it was abandonned for centuries - following the conversion to Protestantism of the rulers of Brandenburg, in the first half of the 16th century - the massive Gothic architecture, one of the most important in Brandenburg, is still impressive visually and architecturally. 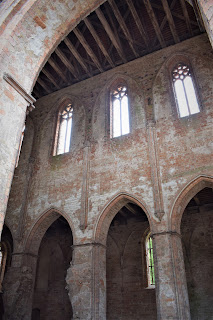 The efforts to save the old monastery, which among others, was used also as a livestock farm, were initiated by the famous architect Schinkel, in the 19th century, who convinced the Prussian kings that those ruins are worth the preservation not only for cultural, but also for nascent national reasons.
The Cistercian order was created in 1088, originating from Cîteaux, near Dijon, preaches values such as austerity and self-sufficiency, elements that were at a large extent resonating with the nascent national identity the Prussians themselves were trying to build. Therefore, the appeal of Schinkel  for an investment in saving the ruins after a visit here, called home more than he probably imagined. 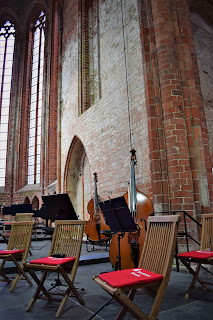 The first part of the concert is filling the air with an exquisite energy. The music takes over everything, and once listening, you hardly notice anything, but the united sound of the fast instruments. It is an exemple how music and culture in general, can embelish and enoble souls, wild nature and even weather. The rain forecast for the afternoon are apparently on hold for now. 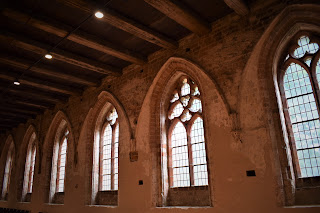 During the short break, it is about time to visit the rest of the abbey and have a look at the various exhibitions tracing the long history of the building and the monastic order in general. The details of the architecture are fascinating though and are telling their own history with a loud voice which does not need too much cultural or historical background. 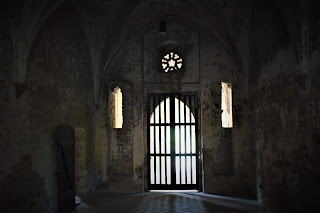 There is a certain ambiance that was probably part of a larger mentality continuum at the time, aimed at a specific representation and projection of the religious feeling. Indeed, the order was austere and less interested in an extrovert manifestation of the belief, but the small details of the construction and the permanent dialogue between light and darkness was there for more than an aesthetic reason. 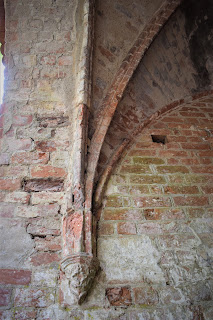 The small details are part of the history and I am enjoying to take picture of those little elements that beautify the place. 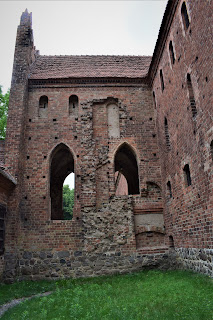 For the Romantic mindset of the 19th century, ruins were an important element of a way of being and seeing the world as a place of loss and permanent reminder of human fragility and short stay on this earth. Some places like castles were left as a ruin on purpose, as in the case of the Heidelberg castle. Surrounded by the untainted green grass, it looks for me as a huge cemetery, where history is burried. 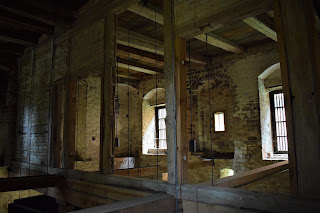 Cistercian monks were hard workers and they had relevant contributions not only to the field of architecture, but also in diverse domains such as agriculture and metallurgy. In the Middle Ages everything was connected to religious activity, therefore, the monasteries were both centers of learning with access to knowledge which further allowed the development of technique and science that at least for a couple of centuries mored it remained wrapped in the covers of religion, until secularisation reclaimed its own mental space. 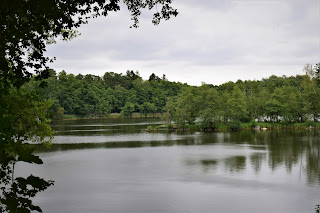 Once the concert is over, I take over the hiking path for bringing the cultural insights into the nature. What can be better than a wondering through the nature with a mind full of intellectual ideas and cultural concepts? It's the perfect environment for a discussion in two or just for solitary random thoughts. The surroundings are not disappointing. 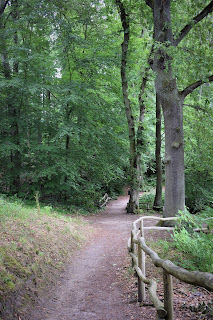 Like in life, the path takes to ups and downs, easier and less easier turns, where you need more focus and self-restrain. 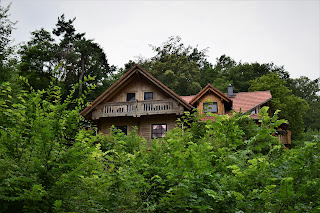 The houses are looking are hiding in a very discrete way, with their presence noticed only if you want to direct your eyes at an upper level. 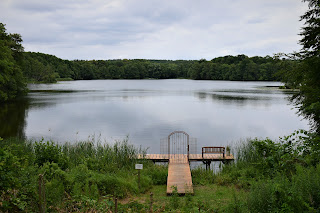 Everything looks remote and I am enjoying the post-concert hike more than I thought. I was expecting just a relaxing walk through the forest without too many intellectual challenges. It seems that the historical overview of the place plus the architectural impressions and the classical concert brought enough food for thought that will stay with me for more than a couple of hours. Maybe for days. Maybe for weeks. 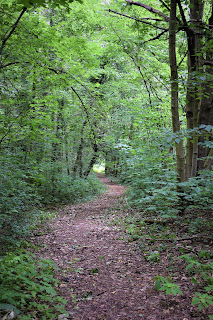 The only question is now: when I will return to Chorin to reveal even more interesting corners both for the curious mind and the nature lover soul?
Posted by Ilana WD at 4:39 AM