Up in the Sky Walking Over the Trees in Beelitz

Beelitz is usually associated with the famous German veggie 'delicacy' asparagus, not the kind of sidedish I crave about - I religiously have it only once the year, just because I want to be a trend follower sometimes. When I visited the place a couple of years ago, I've spent a good amount of time wandering among the ruins of the former tuberculosis sanatorium - Beelitzer Heilstätten.
At the time, the fate of the complex which comprises over 60 separate buildings was in balance, following the plans of real estate companies to turn the area into a fancy luxury compound. Some local protest movement joined forces with creative people from Berlin that succeeded in the end to save the area. According to the final designs, the area of the sanatorium was maintained, and gained an additional value with the creation of a complex which relies on the natural environment.
Thus, relatively fast - as usually when it comes to the German building processes - in 2015 the Baumkronenpfad - Treetop Path a wooden path relying on 15 steel pillars was inaugurated and it is only the beginning of a constantly expanding recreational park, the first of this kind in Brandenburg.
Now, I am on my way to Beelitz to see what it is all about... 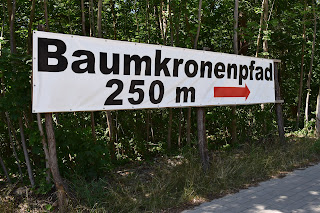 Reaching it is very easy. We are in a train from Berlin packed with families and bikers heading apparently to the same place. Some have picnic baskets and bikes, we only have a camera and some bottles of water. As usual, travel light and enjoy - eventually support - the local restaurants  (just another excuse for being lazy enough for preparing those stacks of sandwiches and roadtrip supplies). 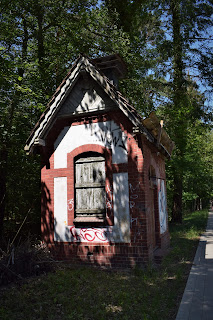 The feeling of being in a place abandoned, used only for various film or photography settings is in the air, despite the big groups of people that are heading to the recreational area. Some thematic parks can be hosted in abandoned places too. So what if this abandoned place is a former tuberculosis hospital? 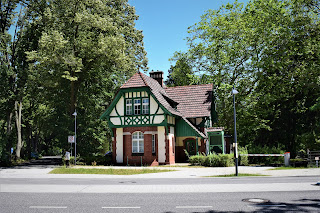 I am passing near an area that was used for the setting of movies like Schindler's List or Operation Valkyrie, which is partly used currently for various medical facilities. 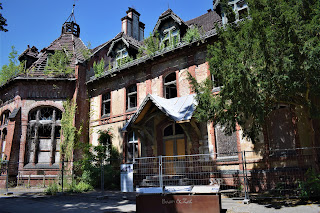 The biggest attraction remain Beelitzer Heilstätten. Intrepid guides in German and English are surrounded by curious visitors keen to find out more about the local history. Some buildings can be partially visited, and I did it during my first visit, but besides some mountains of rubbish, graffiti and rests of human excrements, I didn't find anything terribly exciting to repeat the experience.
A look at the location, without a proper look inside, is enough, especially if you just want to give a visual form to the amount of historical and architectural information you can easily gather online or from various bibliographical sources. 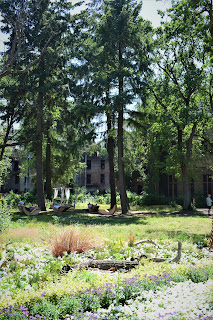 Once you pay for the 10 euro ticket (good news, you can pay with card too), you can enter the area of the recreational park, that was set up as a garden with eating places, and some outdoors relaxing areas, in the shadow of the Sanatorium ruins. 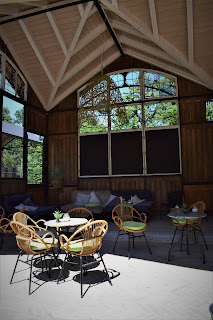 There are some lounge areas with paste colours and a country vibe and a vintage touch, where you can relax while munching on a pancake or other local sweets or some 'pommes' - the local equivalent of French fries. Affordable but not cheap prices, and modest quality, but who is here for the food, anyway. 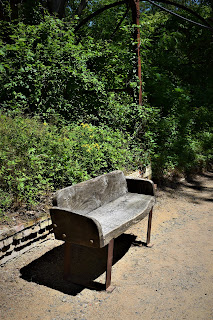 Some old remanants from the Sanatorium years were refined and back in use. Built in stages from the beginning of the 20th century until in the 1930s, the medical facility was considered a forerunner in terms of both architecture and functionality. Beelitz was the location of choice given the good connection to both Potsdam and Berlin, from where most of the tuberculosis - a malady relatively widespread at the time - patients originated. 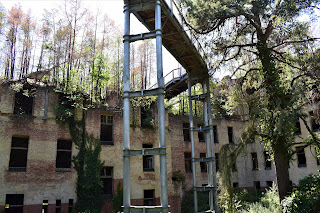 The steel pillars surrounding the area look from certain angles as huge scifi constructions, huge myriapods spreading their multiple legs through the ruins. 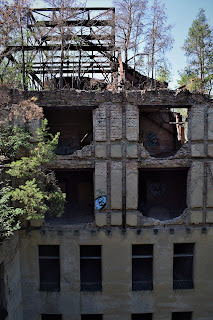 You can reach the top either by taking the stairs or by using the elevator. Therefore, the Baumkrone is open also to families with small children or people with disabilities. 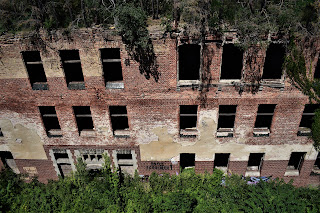 From the soaring heights, one can have a look over the many facilities that were created as part of the Sanatorium. Among others, here it used to be a bakery, a butcher, a church and a nursery, with completely gender separated blocks of buildings. One of the architects who set the plans, Heino Schmielden was a close friend of Martin Gropius and was inspired by his focus on creating functional yet minimally aesthetic architectural structures.
Used as a hospital for the German troops wounded during WWI, the Soviet Army took it over and some of the scribbling in Cyrillic can still be seen on the walls. Not sure, but it seems that the Soviet man was one of the first promoter of the graffiti style, if I am to take into consideration the various handwritten traces left by the military men coming from this country either in the building of the Reichstag or in the Bunkerstadt Wünsdorf-Waldstadt. 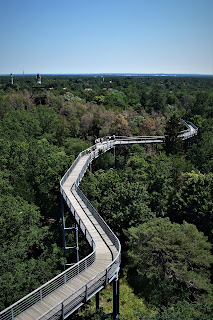 History and thoughts about the past are becoming irrelevant once you admire the views from the top of the Baumkronenpfad. You can embrace with your eyes the entire area of Fläming and it is a beautiful view of it. I only can dream about how this part looks like when the trees are showing off their beautiful autumn colours. 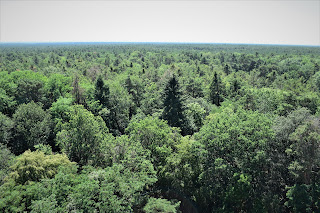 In the last years, around 40 different tree species were planted here, which make it a very good example of sustainable tourism. Meeting the end of the horizon, all you have is a green sea of deep breathing lungs. 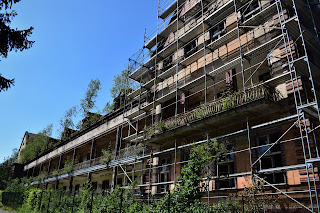 Back on the ground, I notice that some of the buildings are getting some beauty intervention and I am only curious what can be done here. As far as I know, tuberculosis virus can stay in the walls for an impressive amount of time, which make it less likely to create a living space in a former hospital of this kind, but let's wait and see. 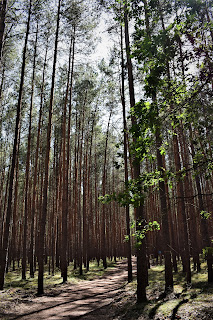 The next stop of the day is a walk in the Barfoot park - Barfußpark - the second part of the recreational area created. There are no ruins here, only the chance of walking without shoes - like everyone does - on the forest paths. It does good to the feet, for sure, but the body needs a bit of time to get used with what used to be a natural feet function - to face the natural structures without any intermediate material and objects - like shoes - in-between.
You can leave your shoes and backpack in the lockers at the entrance, in order to get more freedom of movement and fully enjoy the natural experience. 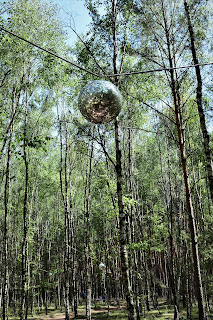 There are different experienced that can be tried in the park: walking through the mud, try your balancing skills, short walks etc. There are three different trails marked by three colours - blue, yellow and green - and you just need to read the explanations and follow your path.
Don't take everything too serious so you maybe can have some spontaneous barefoot dancing party. You might even find a disco globe glowing in the middle of the forest. 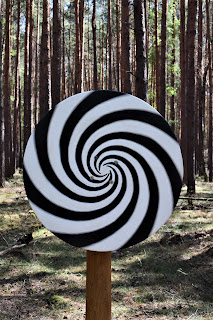 This park offers a lot of fun for everyone, from small children learning to walk, to their parents. Get rid of the stress, enjoy life and recharge your batteries with some nature - including natural dirt, mud and some stitches eventually. 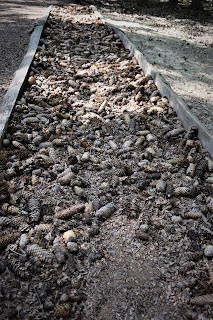 Brave enough to walk on pine cones? Been there, done only half of it, because I know how it feels - tried against my will with small pieces of Lego hidden in various corners of the room anyway. 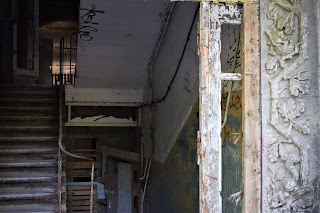 It was interesting to be back in Beelitz and the experience from over the top of the trees was one of a kind. From the point of view of the concept it shows how some ruins with a certain history can be reintegrated into the travel cycle while adding up some sustainable details. Germany is a good example in this respect and would be curious to visit other similar projects. As long as they involve a lot of nature it makes them even more attractive for me.
Posted by Ilana WD at 7:12 AM