Bautzen, more Surprising than a Jar of Mustard

Bautzen doesn't mean too much outside Germany and locally it is often associated with the always appreciated brand of Baut'zener Senf (mustard). However, when randomly mentioned in short travel notices, the capital city of Upper Lusatia, is often described as similar to Tuscany, with a certain unique charm.
As I am about to spend some holidays in Saxony (more to come in the next posts), I started my stay in this region which was frequently in the media of the last months for not so glamorous reasons, with a day trip here. 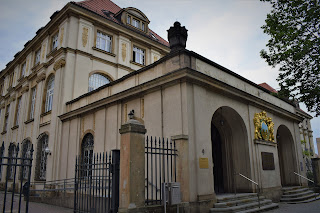 From Dresden, my headquarters for this long trip, I am booking my round ticket for 16 EUR. It takes 45 minutes to arrive and I have no idea what exactly to expect.
The district administrative building is the first noticeable sight upon around 15 minutes of arrival. It looks like a residence of an old court, and the generous touch of gold at the entrance make its presence even more impressive. 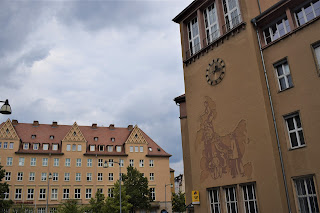 During the Cold War, Bautzen, like another Saxon town that I fancied a couple of years ago, Görlitz, used to belong to the former GDR. During those years, its name was often mentioned in a less auspicious context as it hosted a prison for political prisoners.
On the streets leading to the central - old - area, the buildings keep an austere, unattractive outlook, which combines the post-war scarcity of construction resources and the brutal lack of inspiration of communist city planners. 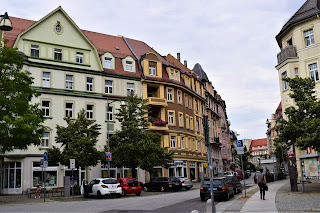 Fortunatelly, this impression lasts only for a couple of streets, as there are enough streets packed with pastel colouredd buildings, elegantly decorated and more welcoming to the eyes. Goschwitz Str. is a good example in this respect. 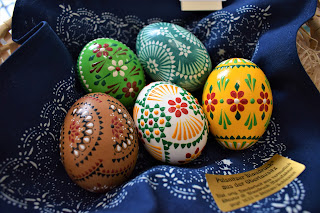 On the map of the European ethnic diversity, Bautzen is marked as an important center for the Sorbian culture. Descendants of two small Slavic tribes, the Sorbs are speaking a language - officially recognized as a minority language in Germany - close to Polish and Czech. On the way here, the name of the train stations from Dresden on where also mentioned in their Sorbian variant.
At the Haus der Sorben (mentioned as a museum, but rather a cultural point where you can gather various information about this minority and purchase traditional items pertaining to their culture) I have a stop to refresh my information about this minority, which is present in this part of Germany, bt also the area around Cottbus, for instance. Considered the smallest Slavonic minority, without other big groups or country to connect in the bordering area, they have unique costumes, folk traditions and customs, such as the colourful painted eggs for the Easter holidays.
As someone with a PhD and years of research in the field of ethnic minorities in Central and Eastern Europe, I will definitely be back in this part of Germany for some more research and throughout documentation. 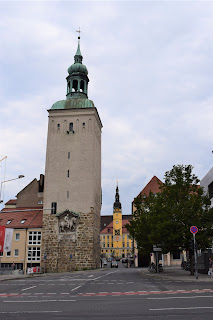 Right now, I am wearing the hat of the curios travel writer on her way to discover the beauties of just another destination off the beaten path. And as I am heading closer to the central area, the eyes are pleased with the views of old stone towers with carved horse-back cavaliers. 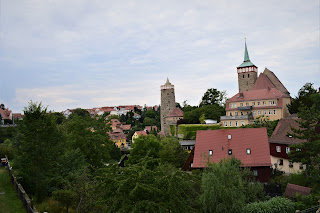 The old fortification system reminds of the times when Bautzen was also important for its strategic role. The sound of war was loud here in 1813 when a Russian-Prussian army confronted Napoleon. 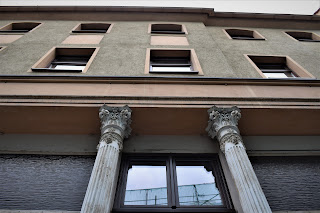 I am generally insensitive to most of the post-war architecture, especially in the Eastern part of Germany, but I cannot ignore the creative way in which some fragments of the old constructions were integrated into new stru 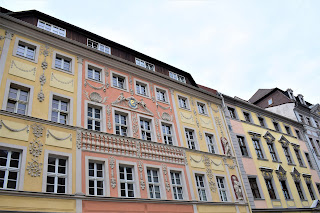 Soon, my eyes and my camera are both pleased by the view of the stylish New Baroque/Art Noveau area around the city hall. Each and every building looks like a fragment of a simple fairy tale. 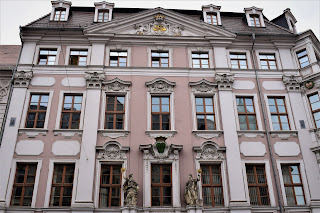 Glorious entrances, good balance of the elements, perfect geometry, matched colours. My only regret is only that the central area is so busy with intensive construction works that I cannot find any decent angle for a big main square photo. 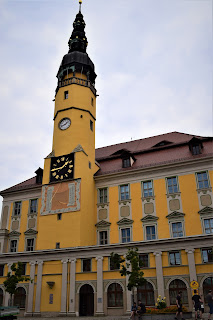 The building of the city hall is painted in vivid yellow and looks like a mixture between a religious establishment and a countryside palace. As it is Friday afternoon, people of all ages, are just hanging around in the front of it. The human element brings you back in time otherwise you might have thing you forgot your Baroque outfits at home and you cannot be allowed to take part to the Friday evening ball at the palace. 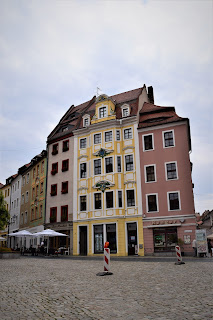 I am more on the hunt for colourful buildings, but it is becoming harder and harder to avoid having some construction marks in the picture. 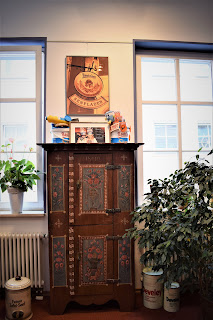 A short tasty stop - and some journalistic documentation, of course, at the Baut'zen museum featuring the famous local mustard. The museum as such - that can be visited for free - covers a big room where various stages of the development of this tasty products are features, including the preparation and the ingredients, as well as the material culture associated to it - jars, branding etc. Once a top food brand in the GDR, the products branded under the logo of Baut'zen - mostly mustard, but also vinaigre - are an important chapter in the book of successful German brands.
At the entrance, on the other side of a 19th century counter, the vendors are encouraging the customers to try various sortiments, the first step before a serious investment into local products. I am curiously trying several of it, my favorite being the exotic fig mustard. 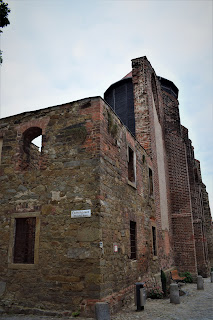 And there is more to discover in Bautzen, while taking slowly the empty cobblestone alleys, like this abandoned abbey, which adds a fully romantic touch to the urban landscape. 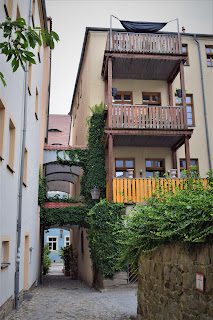 Or the hidden alleys, were remnants of the old walls are facing wooden balconies of 3-storey buildings. The modest outlook of most of the urban look in general is not surprising: during the 20th century Bautzen was a relatively poor city and after the war, the city was shortly taken over by the Red Army and afterwards not necessarily priviledged during the GDR years. 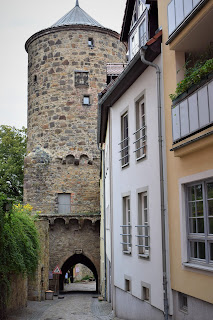 Surprisingly, at the end of such an alley one can encounter an old tower, but there is no princess to rescue there. 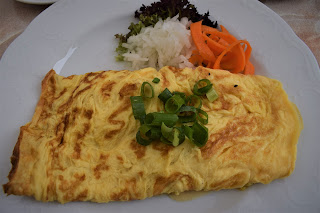 After so many hours of wandering, it is about time to have a taste of the local eating culture. We are heaving lunch at Zum Karasek, but although the service was very friendly and the ambiance outdoors very welcoming, my menu choice wasn't as satisfactory as my big hunger was. The food was a bit too salty and not too tasty. Maybe I would have better tried the Senfgulasch? 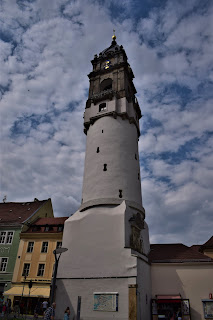 Hopefully, there are more foodie temptations as well as many shopping opportunities as we are going down the Reichenstrasse, that at this time of the week is bubbling with lazy energy and also a couple of tourists - beside us. We are here with an aim though, to reach the end of the Reichenturm, described as one of the steepest leaning and still passable towers in this part of Europe. 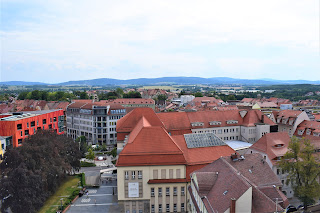 Climbing the stairs went uneventful and the view from the top, embracing the entire area is rewarding. However, after a bit of consideration, I might contradict those comparing this part of Germany with Tuscany. As usual in such circumstances, I prefer to avoid comparisons and rather unleash the uniqueness of the place. 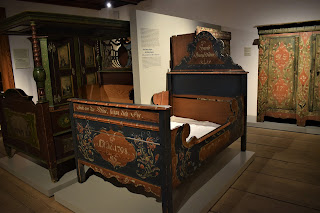 The last stop of this trip is the Stadtmuseum, an excellent destination for learning about the region's cultural, natural and historical heritages. It offers enough material to keep you busy for at least two full hours and it is fully worth it, because you can learn faster than by reading thousands of pages.
From details about the geological evolutions in the region to reproduction of original Sorbian interiors with richly decorated interior, the museum displays in a very classical way fragments of local knowledge. 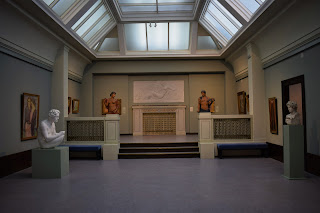 Noticeable for me was the arts section, where I was able to discover representatives of the apparently active art movement, with new painters, such as Carl Lohse added to my list of interesting artists.
After Görlitz and Chemnitz and of course, Dresden, Bautzen revealed unique stories about this part of Germany. Saxony remains still a mystery for me, therefore, I would be more than happy to discover more and more stories in the next weeks and months.