A One Day Guide of Lovely Hiking in the Sächsische Schweiz

I did my first hiking at the crude age of 5, in the Carpathian Mountains, back in the old country. Since then, the legal three months of summer vacations were most of them spent in a similar way: exploring the mountains from the area of our summer house, step-by-step, a bit longer each year. Until 14, when I started my own travel adventures, the mountains were my second home and was not only able to distinguish between edible and non-edible fruits, but also to properly set up a camping place, make the fire and have some basic self defense knowledge about fighting wild animals, like bears.
Wherever my travel and life steps lead me, hiking - and nature walking in general - continued to play a great role into my life: Was I professionally and personally happy? I was booking a hiking. I was heartbroken - a hiking will cure my pain. Was I in love? Only a walk in the nature will give me time to cool down and take the right decision. Was I looking only for a way to pleasantly spend my weekend? The simplest way to recharge my energies is by going to the mountains. Most of the time, I preferred to do it completely on my own, regardless if it was someone waiting for me waiting at the end of the hike. Me, alone with the mountains, is the highest form of personal reconnection I offer myself and it should be done in complete silence and privacy. It was not only like this, but I got easily used with that.
Since moving to Germany ten years ago, I moderately did a couple of hiking, mostly in the Harz Mountains. I become too busy with life, heartbreaking, recovery, family and other hectic events. I was always longing for nature and that feeling of tiredness when you are on the top of the mountains, but, again, I was too busy to recollect the broken pieces of the mosaique that was my life of the last years.
Until I got the most serious wake-up call of my life and figure out that my biggest problem was that my beautiful life was partly hijaked and if I want - literally - my voice back, I have to detox completely. Trying again that genuine connection with nature that was such a faithful companion during all my life changes was part of my plan to spare myself the pain of not fully expressing my inner thoughts and beliefs.
Out of time, I wanted a place close from home, relatively easy - I do a kind of random physical training but not strong enough for complex hiking - but with an impressive natural landscape. After doing a bit of research, the famous Sächsische Schweiz area - Saxon Switzerland - seemed as the most recommended destination. Which coincided at a great extent to my German travel wish list, as it was one of those places every reliable travel bloger I follow in the country and abroad already visited but me. 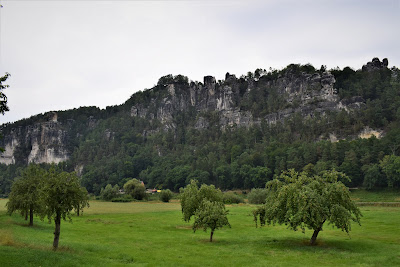 First and foremost, I might state it very bluntly. I deeply disapproved comparison between places. I am at odds with all those comparisons between Paris or Venice and other cities - 'Paris of the East', 'Paris of the Middle East', 'Venice of the North'. Such relationships might help travel branding but in fact it takes out the possible uniqueness out of special places that most probably would be able to survive completely based on their own special features.
I have the same feeling when it comes to Switzerland. There are several places in Germany compared to Switzerland - a country which I know, oh so well, especially the mountain area - but as for now, none really made me feel like it. The answer is not that I am such a cold person, but because those places are beautiful as they are, no comparison needed.
In the case of this part of Saxony, the comparison was made by two Swiss themselves, students at the Art Academy in Dresden, probably longing too much for their home. The reference remaines after over a century and keep being proudly repeated in touristic documents and travel logs. For this blog, I keep the name for official references only as my personal belief is that this place has its own features and unique vibe. 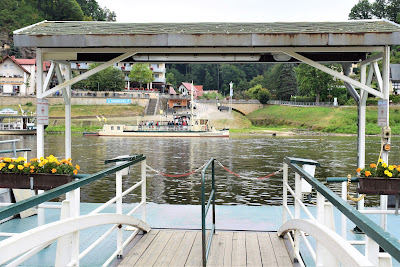 There are many locations from where you can start your journey through the mountains, but after in-depth documentation, I've chose to start my journey from Rathen Kurort, 45 minutes away by train from Dresden, round trip covered by a one-day 14 EUR. ticket which can be used for going to other destinations along the road, such as Bad Schandau. From the train station, we took a boat to 'spring' on the other side of the Elbe, surrounded by an early morning misty landscape. 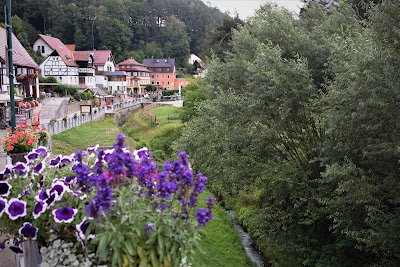 On the other side of the river, the rain is about to start and the small groups of tourists covered in colourful raincoats are looking rather for a place to be protected by the showers than to try to feel how it is to wake up with the mountains. The place looks neat with clean cobblestone-streets bordered by 2-3 story big houses, mostly hotels. At the Dofladen - village's shop - we stop for a generous piece of cake, hopeful that the rain, which is becoming real and aggressive, will leave soon. 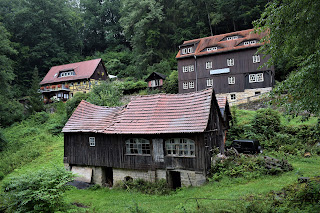 After almost one hour, it really stops and we are ready to finally fill the lungs with fresh air. Maybe there will be some quiet pathways as well, which looks less likely, as it is weekend during the school vacation time therefore, hard to avoid the shoulder-to-shoulder cramped placed. 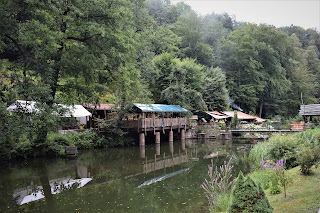 When we are looking around, it is expansive green trees that we see, and we forget the crowded city feeling. 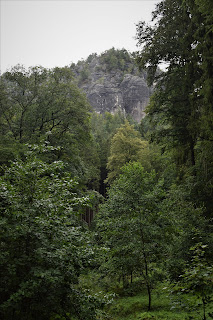 The after-rain mist is slowly fading away, revealing the typical abrupt stones of the mountains, a typical feature for this part of Germany. 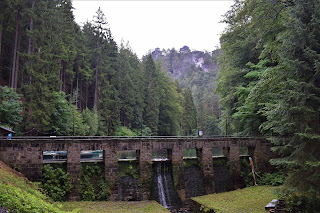 The rough appearance of the wilderness - although nature was so beautifully 'humanized' by poets and painters, it is just pure vital energy which emanates and human words and descriptions are just attempts to make this frightening force bearable - is mildered by the artificial waterfall. Although there are so many people, the ambiance remains silent. Or at least, it was, until we arrived... 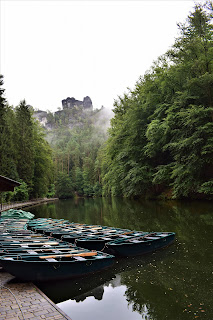 At Amselsee, you can rent boats for small lake tours. It is one of those times when I really regret for not being able to swim. 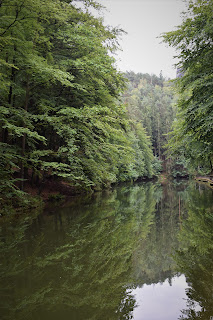 At least, we are saving some time for hiking and the more we walk, the wilder the surrounding is. 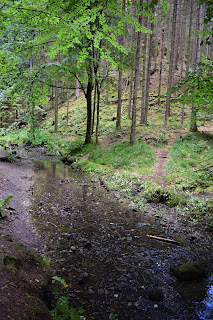 Which does it mean that it makes the hike more difficult. You can easily walk through the forest and after a couple of hours I still haven't felt the burden of too much physical effort. 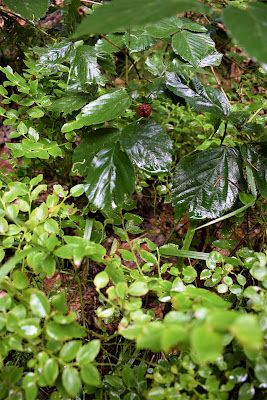 Far away from the restaurants area, we find natural energizers, small berries, which reminds me of the times when my only deterrent to not finish all the raspberries from the trails we were following was that if a bear will come, he will get distracted by some berries therefore, need to leave some for emergency situations. 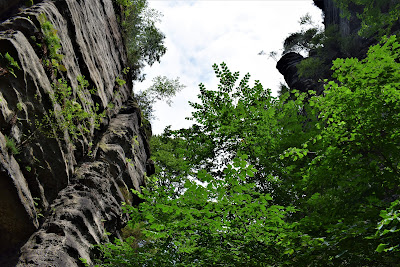 The eyes are mesmerized by the beautiful stone structures. It gives a sense of lonesomeness but in the sense that it opens the eyes about those things that really matters and, as the stone, will stay there after all the storms. 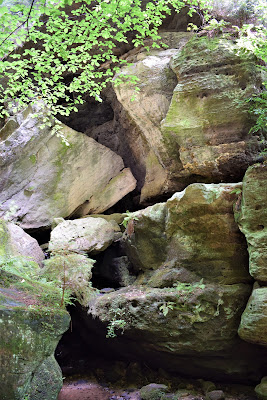 I bet there are some parts of the mountainous area where you can climb the stones. I haven't done it in a long time either, but would love to get back in shape to do it in a foreseable future. 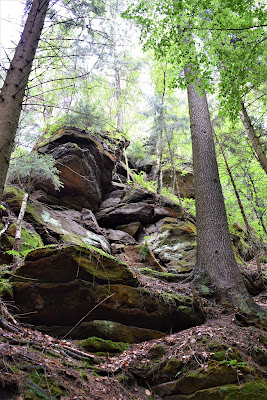 The landscape looks like it went through many strong storms that wildly took away trees and rearranged the huge pieces of stone. The rays of warm light coming from above are taking away the thoughts that maybe will be better not to stay too much around if eventually a new storm will start. 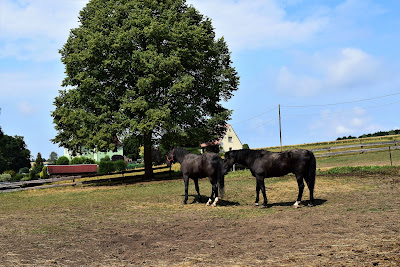 But the settled human presence is a sign that things cannot go that much worse. Quiet horses having their lunch are a beautiful view after the relatively long hike. 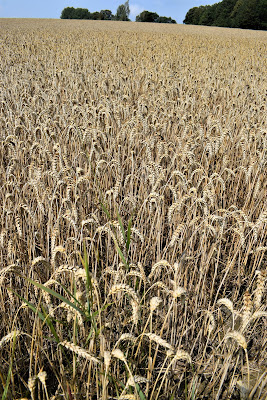 And so are the field, which are a good reminder that it is not too much left until the autumn, and with it, the long dark cold days. Carpe Diem is our motto while we are slowly taking a different way back to Rathen (one of the lessons I've always followed during my hiking years: always take a different way back - not a superstition but a smart way to see more than one side of the mountain) 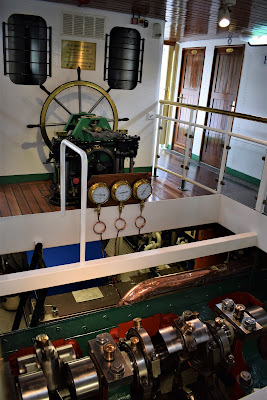 We have enough time left to continue our trip with a short trip to Königstein - by a steam boat operational since the end of the 19th century. Despite its venerable age, it moves energetically alongside Elbe, welcoming with high-picked sounds other younger boats along the way. A two-way trip from Rathen to Königstein costs 19 Euro, amount that can be also paid by card. 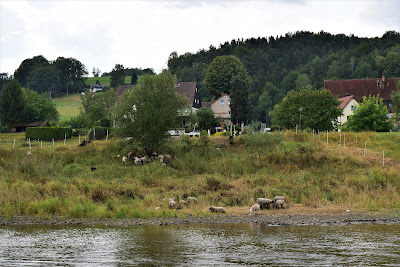 Not bothered by the noise and the human presence in general, the sheeps are continuing their intensive diet on the other side of the river. 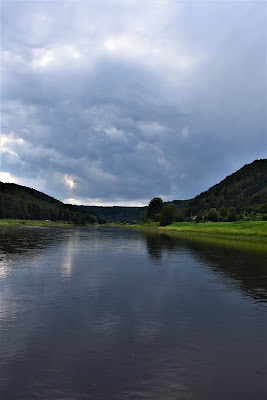 Although the human presence is relatively settled around, with many houses on the shores, there are also some points where the river meets the sky and the trees which make the journey memorable. 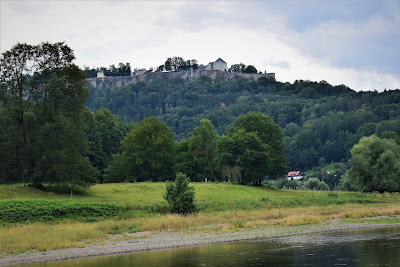 The 'free state' of Saxony is a part of Germany with many castles, as it was made of different independent kingdoms which confirmed their presence and the limits of their power through fortified structures on the top of the mountains. 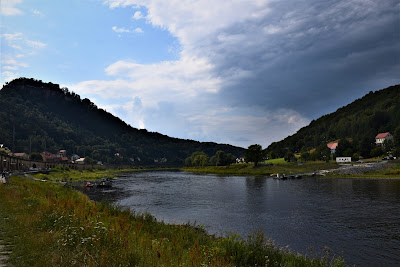 History, nature, culture, personal thoughts, there are so many things to consider during this journey which unfortunatelly comes to an end in less than one hour. 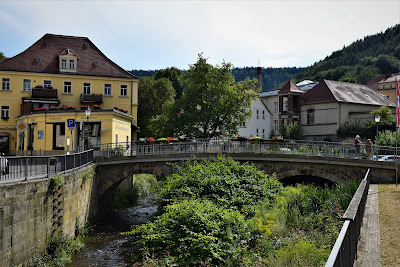 Instead of going further on to Bad Schandau, we decide to finish our trip to Königstein and enjoy a little walk in this town before heading back to Dresden. From here, you can take some small hiking trip or just enjoy its urban charm. We are going on with the second variant. 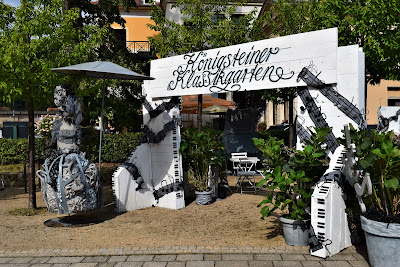 There are a couple of things to do here, just hanging around in the Musical Garden, where benches are shaped as musical instruments. 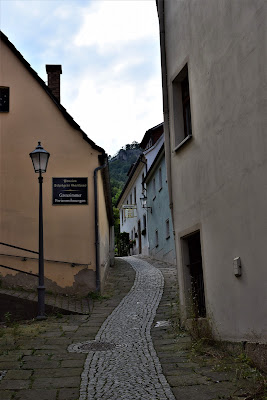 Or explore the narrow cobbled streets bordered by pastel houses. 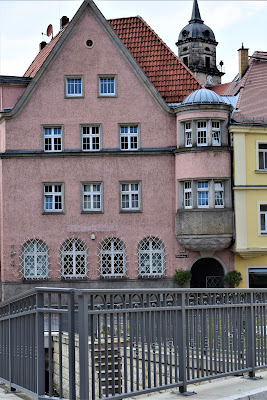 Or get used with the specificities of the modern Saxon architecture - also painted in pastel colours. 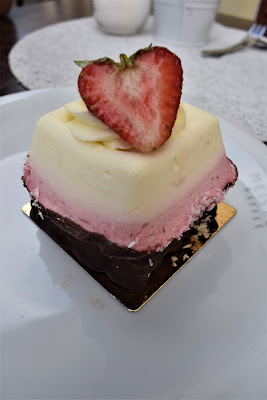 We did all of this, plus offered a bonus for the hard hiking, with a layered cake at the very family-friendly Café im Sachsenhof. Delicious treat, indeed, and hopefully the right celebration of many more hiking trips that I want to take in the coming months and years. We all should have our little secrets to recharge our energies and eliminate daily poisonous negativity and overthinking after all.
Posted by Ilana WD at 5:48 AM