Let's talk cities you travel often to. After going in one place more than five times or more, and visiting some of its well known tourist and food destinations, you will get almost convinced that you know almost everything about the place. You can make your way back to your hotel on your own, using public transportation counts, isn't it? The problem though is not that you are becoming familiar with a place, but that self-sufficiency is killing all chances of discovering something new. Therefore, you are missing the full picture. And this goes easily with the place you are living too.
Take, for instance, in my case, Dresden. I've been there so many times - over ten years - that when I planned my latest vacation of hiking in the Sächsische Schweiz and mustard tasting in Bautzen my intention was only to spend some time around, see a museum or two and come back early in the evening to Berlin.
However, when I was approached on the street by one of the many operators trying to see hop-on, hop-off tours and had a look at the leaflet, I realized that I was not familiar with more than half of the places that were about to be seen. Are those places in Dresden? How could I miss them? And my spontaneous change of plans occurred: we will do such a tour - which takes around 2 hours, but you can stop and see/visit the places and wait for the next bus - which comes in time every 30 minutes - which can take a bit longer - as long as a day. For the first time since going to Portugal, I did it and I have no regrets, although many might say that I am guilty of being a tourist. After the journey, not only I got a completely new perspective on Dresden, but I can't wait to be back to see some of the places I was shown during this tour. 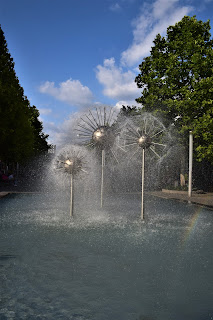 Especially in the summer, Dresden is very busy. Tourists and locals are gathering in the weekend on Prager street for after-shopping coffee and chats or just for some people looking. This part of the central area displays a completely different architecture - post-war, modern, with a touch of socialism - than the classical center, with its blackened stones buildings. 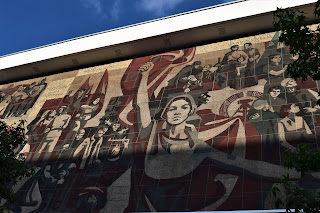 Some even display massive DDR-style murals, aimed at the time to strengthen the community feeling of the newly post-war republic. This development is part of the city new features, with communist style blocks of buildings facing baroque castles.
Just a couple of meters away, the newly Das lebendige Haus displays a holistic concept of office spaces, a bit of shopping and a food court with a view over the Zwinger. It's weekend o'clock and cocktails time, but unfortunatelly the best places on the balcony are already taken. 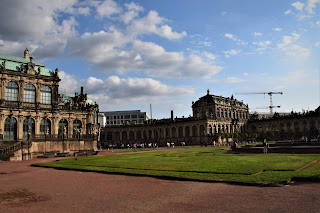 It was a long time since I've seen last the Zwinger, one of Germany's most famous baroque palaces. It's geometrically shaped garden is always a pleasure for me, and its overwhelming details are inviting the mind to make new connections and discover histories. Since my last visit, Instagram boomed and so did social media in general, therefore, late in the afternoon, it is almost impossible to find a spot for a photo without interferring with selfies, fashion shootings and other activities. 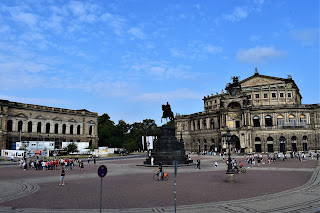 During this trip, I had the chance to observe more than ever the similarities between Dresden and the Italian cities. I miss Italy so much, but Dresden can sooth my longing, at least for a while. As Italian architects and experts contributed to the modern planning of the city, Theaterplatz - among many other places - reproduces a slice of Italian cities. No wonder that this German city used to be called 'Florence of the Elbe'. 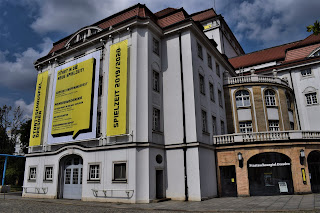 Dresden is a city for culture lovers, from the famous Opera that on Saturday evening was surrounded by so many people about enter the performance to its many independent theaters, it offers diverse activities for culture lovers. Staatschauspiele, for instance, close to the Zwinger is even more than that. In the communist times, it served as an important stage for the voices of change and nowadays it offers a very modern repertoire, often with a clear social engagement line. 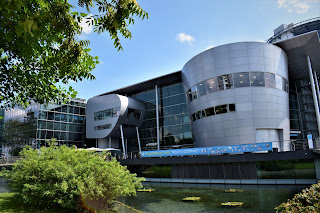 Dresden is also a city of high-tech. Gläserne Manufaktur is one of those places where the present meets the future. Volkswagen's local headquarters it was opened as a production site, focused on sustainable transportation. However, here are not only assambled 72 e-Golfs the day, but also tours and live experiments displaying the future of transportation are offered. With around 100,000 visitors the year, it displays the same interesting mixture between bold architecture - as at the Wolfsburg headquarters - and a high consideration for the environment, as the area is surrounded by a generous green area. 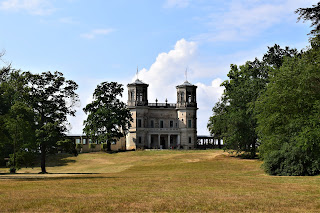 But now I am a bit back to the past, discovering the elegant Lingner Castle, built in the second half of the 19th century for the Prussian family of von Stockhausen. The manor is enormous and crossing it is an experience in itself. It has almost everything you need for a full-day experience, beautiful views, interesting histories, art collections and also a great food spot. 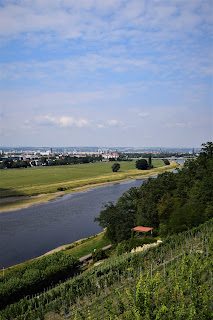 For those visiting only short term, it is worth to go to the terrasses and have a look over the Elbe. The river has not only beautiful views, but invites the dedicated cyclists to a relaxed tour which reveals nature and culture at the same time. 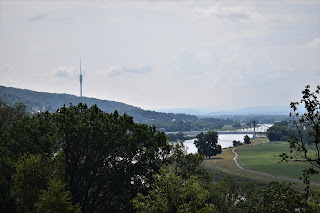 Far away, one can spot on the top of Wachwitzer Elbhöhen, the Dresden TV Tower, whose design was insired by a sparkling wine glass. Cheers! But let's move forward. 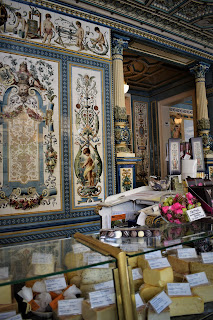 My next stop is in a place which is hard to describe, as it is so out of place in a way. It rather looks like a Spanish or Portuguese bodega. But it is just a delicious milk shop. Probably the most beautiful in the world, and it is already recognized officially so by the Guinness Book of Records. Pfunds Molkerei survived wars - escaped unharmed by the heavy WWII bombings - and was took out of service by the communists. 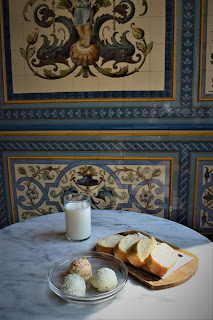 Surrounded by its colours and the Neorenaissance ambiance, with big groups of people coming and going, I am having a short cheese tasting treat, accompanied by a glass of milk. Which milk is fresh, heavy and as genuinely delicious as the milk we were provided by the milkman in my childhood. 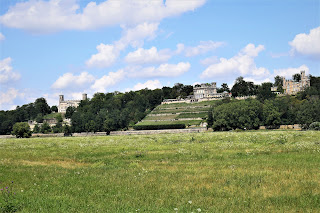 The more I see and heard about Dresden history and urban development, the longer the list of the places I am planning to see next. Castles, fancy areas, museums, natural spots. I can see a lot of more Dresden trips in the future. 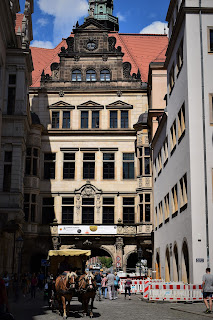 But as for now, I am back in the central area, enjoying the mixed ambiance of new and old, and we are unable to find a free carriage for a new city tour, in a company of nobles animals this time. 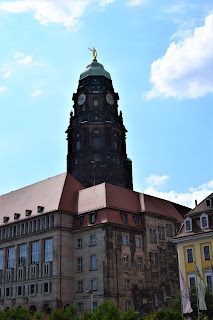 Before we leave, we make a short stop in the front of the new City Hall. It is Sunday and we cannot go up to the 68-meter high tower to have another view over the city, so we admire everything from afar. On the top, Hercules, the patron of the city represented by the sculptor Richard Guhr is overviewing the city. His right arm raised over Dresden raised some issues after the war, due to the histories associated with it, but in the end he maintained his posture. Probably he is checking if it's raining, some say. Or maybe his hand is warning the residents of that part of the city to finally pay their taxes, some others assume. 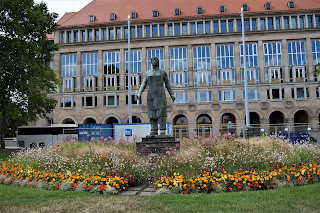 In the front of the building, we meet the Trümmerfrau - or the Rubble Woman - one of the many women who after the war helped clear the bombed German cities of the tons of rubble produced by the bombing.
And there are so many more Dresden histories waiting for me that I can't help but start planning a new trip, as soon as possible.
Posted by Ilana WD at 10:48 PM