One of the things I've acknowledged in four years of intensive travel with a little child is that the planning of a trip rarely works. There are so many constraints and unexpected things happening - tantrum, anyone ? - that you better keep being realistic and relaxed and get the best of everything, even it is only a very small amount of what do you wanted to achieve.
I wanted to visit Kassel for a long time, lured by the idea of checking the Brothers Grimm Museum, the traces of documenta art happenings and various places  of local history and arts. I finally booked a trip at the end of November, with an ambitious to-do-list and one full day to see them all. Which was not necessarily what my little travel companion wanted too. On both sides, we had to accommodate and the journey ended up as a pleasant slow travel experience. Unusual for me, but the compromise guaranteed a smooth trip and the chance to focus on the quality of an experience, instead of the quantity. Almost two months after, I am still thinking how to practically do this more often during my trips. 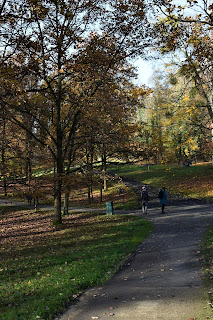 The train left us in Wilhelmshöhe area, highly recommended by travel experts and friends of friends living there, for the old charm and the healthy concentration of both natural and cultural sightseeings. My perfect kind of travel match.
From the train station, we took directly the tram that left us opposite the park entry.
Among the many new things you learn while being on the road with a small child and not owning a car is how to use the local public transportation network. It saves from a lot of complains but can be also considered a fast way to move from a point to another. As I had a long list of places, I purchased a weekend multi-ticket for just 6 Euro. I mostly used the trams which were in time and fast, and with good connections. 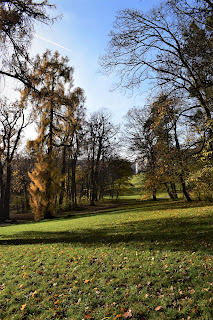 The autumn day started good, and the Bergpark area was entincing. Together with locals of all ages and sometimes their dogs too, we slowly follow the beaten path leading to the top of the hill. An easy hike during which I kept filling my lungs with the fresh crispy air. 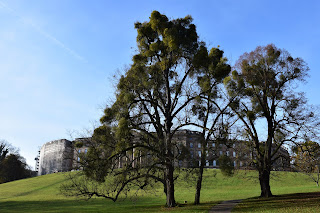 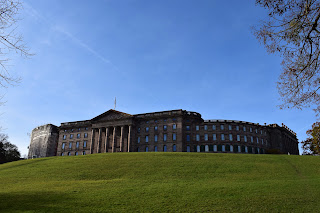 After more than half an hour of walking, the simple neoclassical figure of the Schloss Wilhelmshöhe revealed its majesty. Built in the late 18th century, it was used as a summer residence, and nowadays it houses an extensive art collection. Since 2013, it is part of the UNESCO World Heritage Site Bergpark Wilhelmshöhe. 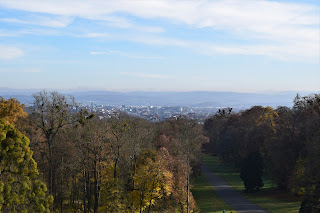 You need more than two hours to carefully admire the international art collection which includes, works by among others Caravaggio, Rubens and Rembrandt. From the third floor, you can have an extended panorama of Kassel, which was for me the only was as for now to see the city in perspective. 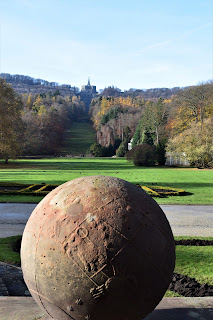 You can easily spend one full day exploring this park covering 2.4 sq. km, which makes it Europe's largest hillside park. But due to time constraints, I had to skip the pleasure of seeing the massive Hercules and explore the many romantic corners. As for now, as I bet it makes it a gorgeous outdoors destination for the summer. 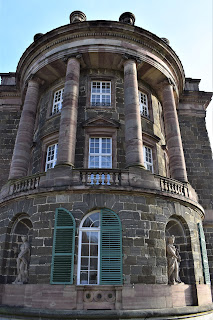 I have just another look at the details of the palace, snap a picture and hurry up to take the tram to the center of the city. 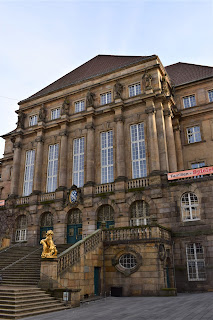 Which center, compared to the middle class feeling of the Wilhelmshöhe area, was an aesthetic disappointment. Most of the buildings are new, from a time when the building materials were expensive enough and cheap variants were chosen instead.
The main shopping areas are crowded with people trying to have their holidays presents, while the rest of the public space is taken by the boots of the Christmas market to be inaugurated in a couple of days.
The only presence worth a picture is the historical building of the city hall, in the front of which soon  a protest for human rights in Iran will be held. As the protesters showed in significant number I couldn't stop hoping that maybe there is a good Persian restaurant around, which apparently was not. This is now I ended up eating some bland food at the Karstadt food courts on the other side of the road. What a shame... 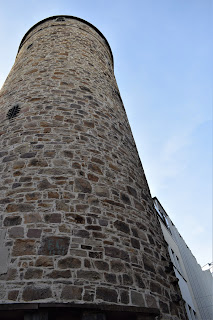 The side streets are less packed and you may even find some remnants of the past, like the 15th century tower, Druselturm. 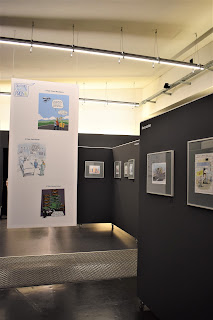 And, as just another travel dream, the time has come to return to the train station to get back home. As we arrived early, used the extra time and for 5 EUR. visited the Caricatura gallery, just at theWilhelmshöhe station. It exhibits cartoons on contemporary topics - politics, environment etc. Some did have a drop of humour but more of them did not resonate particularly with my standards in this respect. A matter of taste, of course, 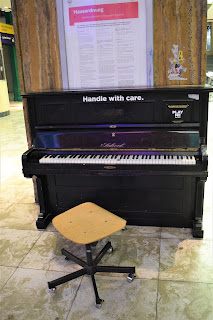 While slowly moving towards a bench to rest, the empty train station halls resonated with the piano sounds. There were different hands, and techniques and styles and music. The source was a real piano where the passers by were able to practice and play. For the next hour, I've watched idly people coming and going in the front of the piano, playing their loneliness and hopes.
The perfect ending to a trip that left so many open doors for a return.
Posted by Ilana WD at 1:41 PM