I've spent a lot of time as a kid attending opera performances, but my preferences in this musical area are very limited and I highly appreciate very modern - revolutionary I dare to say - interpretations. Since moving to Germany I haven't been to too many performances, unfortunately, but my latest visit to the world capital of opera, Bayreuth, is about to change this situation. As usually in my case, in order to be convinced of something I need a wise combination of culture, history and architecture. It's the only way it keeps me interested.
After visiting the impressive Margravial Opera House in Bayreuth, I wanted to continue with more similar encounters. Next on my list was the recently renovated Berlin State Opera on Unter den Linden/Bebelplatz. 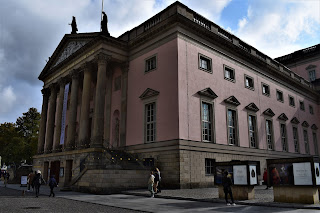 The best way for me to get a better feeling of a place is through a guided tour, therefore I embarked on a 90-minute behind the scene tour in German - tours in English are also available, you can find more about it here. The guide seems to be an opera lover too, therefore recommendations about the upcoming performances were more than welcomed. For one hour and a half, the ancient temple looking like building whose renovation costed 20% of Berlin's budget was a welcoming home of cultural findings that got me even closer to my culturally-filled childhood. 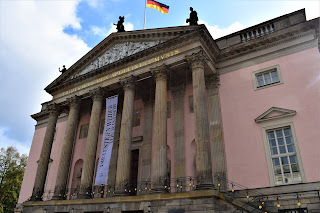 I am ready for 250 years of German music history. Inaugurated in the first half of the 18 century, and renovated several times Berlin Staatsoper is a historical institution as well. Destroyed by fire and the WWII bombs, it come back to life successful every time, attracting high profile music names across centuries, such as Leo Blech, Richard Strauss, Giacomo Meyerbeer or Herbert von Karajan. 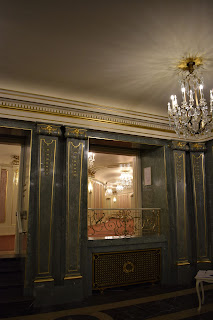 Staatsoper's first architect was Georg Wenzeslaus von Knobelsdorff who also designed the Sanssouci  in Potsdam and the enlargement of Charlottenburg Palace. He's mission was to put into practice Frederick the Great's plan of transforming Berlin and he partially succeeded: at the time of its inauguration, Staatsoper was the largest in Europe and Germany's first free-standing opera.
All the architects that remodelled the Opera tried to leave their own traces too, but the details of von Knobelsdorff's work are still present. 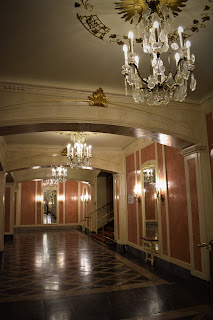 A short walk across the foyer reveals a good mixture between classical simplicity outlined by glamorous lights. A serious ambiance, indeed, which prepares the visitor for the solemn performance. 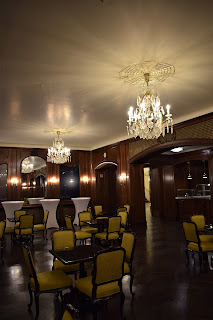 The cafe - closed at the time of the visit - is another elegant stop during our guided tour. Unfortunately, there is no way to check the delicious pastry that apparently is available here during the regular performances' program. 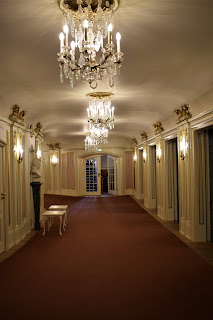 One of the latest architects that influenced the visual development of the opera was Richard Paulick. He previously worked with Gropius and overseen the massive post-war  renovations starting with 1951, during which the representations were mostly relocated to Admiralpalast. Paulick, who was involved in the building of Stalinallee in Friedrichschain - currently Karl Marx Allee, was not so impressed by the flamboyant rococo fancied by its predecessors which tried to tempered with his preference for classical lines. 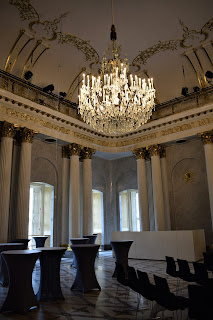 His efforts are visible in the festive space of Apollosaal. The only outstanding piece here is the candelabra which spread its glows over the otherwise austere interior. 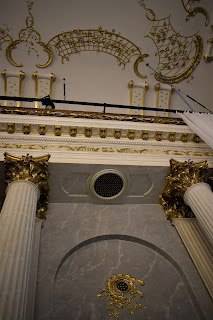 The golden details still remind of Sanssouci though. 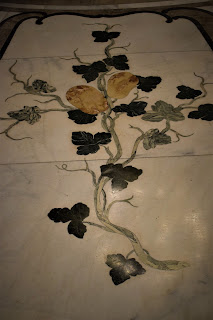 And the extensive potato representations on the floor remind of what? 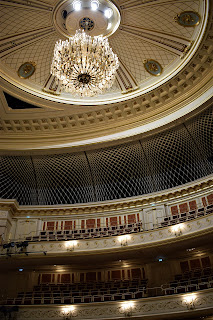 Until I am considering the various options, our group moved to the opera hall. Part of the extensive 2009-2017 renovations, the roof was raised and the acoustics was significantly improved. 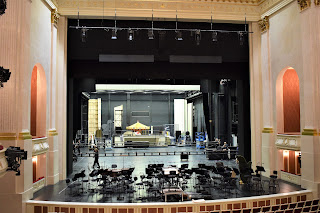 There technical teams are preparing the evening performance but there are no actual rehearsals therefore no way to check the sound quality right now. 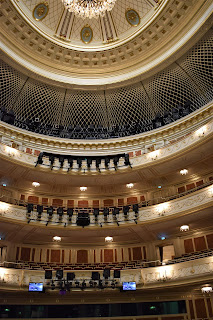 The opera hall as such does not look impressive at all, but it has a kind of simple grandor that promises qualiy. 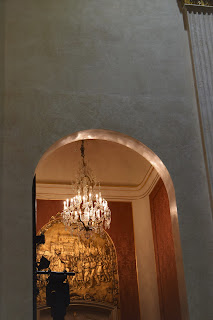 During the DDR times, the former Royal Opera House (Hofoper) become the State Opera of East Germany. The golden plaquette representing a proletarian revolutionary scene is there as a reminder of those times. 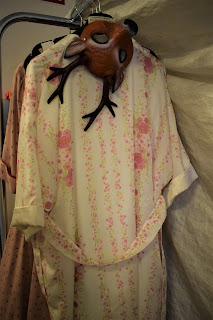 As our guided tour advances, we feel the business of the preparations for the performances. Everything is set many hours in advance, including the costumes. 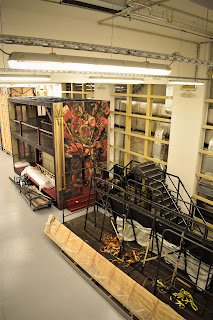 One of the many advantages of taking such a guided tour is of being reminded of the tremendous work behind every single show, and it includes not only the artists, but especially the members of the technical teams, in charge with setting the decor or doing those simple things as the make-up, for instance. 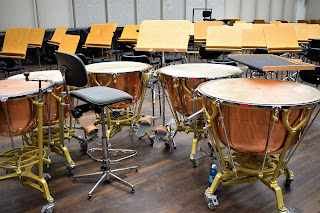 The super sound-proofed rehearsal rooms are waiting to be filled soon with the sound of the classical music. 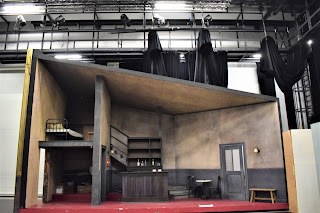 The 90-minute journey behind the scene was extremely informative, but also an encouragement to see a couple of performances this season. For the English-speakers, there are some good news: many representations do offer English-German translations.

Disclaimer: I was offered the opportunity of a free guided tour, but the opinions are, as usual, my own.
Posted by Ilana WD at 3:54 AM