There were many reasons I wanted to visit Bad Muskau for years, besides many recommendations from expat friends and locals. Among them, the idea of a transnational park and the occasion to see a beautiful castle. 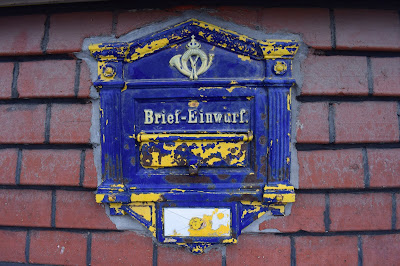 Arriving there is not that easy, First, I had to change the train twice and use a local bus until the destination. Everything went smoothly though so I did not have any serious reason to regret my almost 3-hours ride. I used the one day 44 Euro ticket plus another 7 Euro for the two-ways bus ride. 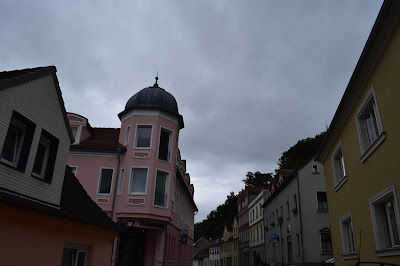 Although in the middle of the week, tourists were all around, many coming from the neighbouring Poland. The name of the streets are usually bilingual - German and Polish. Although on the many central architecture, the traces of the ugly and dark coloured architecture from the time of communism is still predominant, on the side-streets, interesting shapes and vivid colours dare to offer the visitor a different impression. 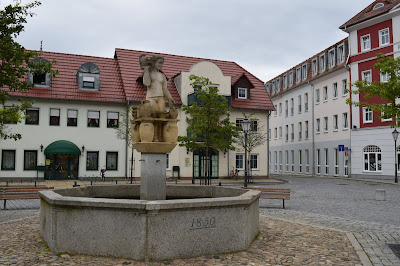 The cobblestone streets recreate an ambiance of nostalgy and the feeling of being back in time. And with the horse carriages ready to start the visit through the Bad Muskau park, you feel like being send back by a time-travel machine. 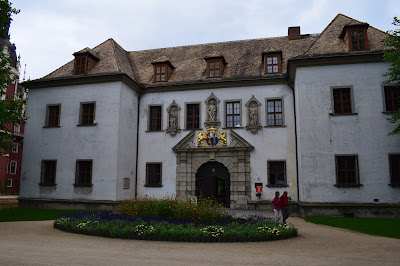 First, we need to step on the other side of the castle gate. 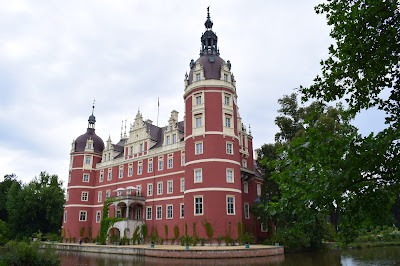 The next seconds I am mesmerized by the brave red presence of the castle, whose front seems to  want to jump up in the high sky. One more look and two more pictures and I decide to go further on to see the famous gardens, built around the island where the castle is situated. 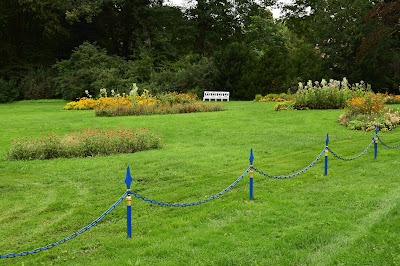 Bad Muskau Natural park is the largest and one of the most famous English gardens in Central Europe, which goes on both sides of the border between Poland and Germany. For instance, 3.5 sqm. of the park is in Poland and the rest of 2.1 sqm. in Germany. A symbol of the post-war warfree Europe, the park is considered more than a beautiful sample of human work with - not against - nature, it means co-existence and sharing common values. 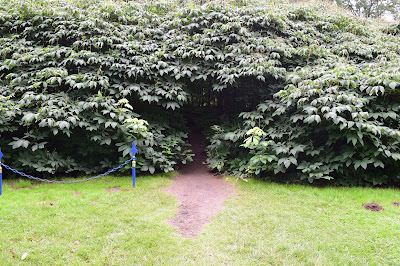 Without aware of the symbolical, historical and even political information, the visitor is offered the chance of an exquisite outdoor journey, crossing through huge trees expanding on big surfaces that you can explore through a small path in the middle. 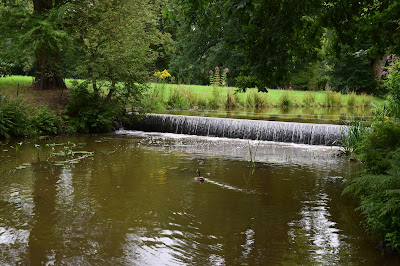 Small waterfalls challenge the uniformity of the landscape and bring the music of nature as a background of a long ride. 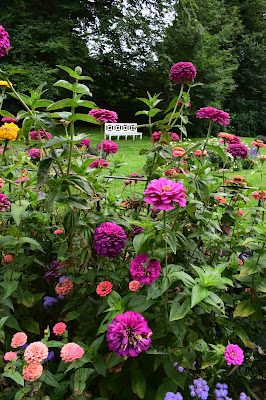 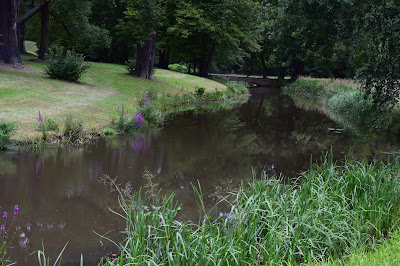 A small rain kept us company for most of the 4-hour journey through the park, but the high trees are protecting us. We cross paths with small groups of visitors, or couples in love or bikers quietly nodding a 'hello' or just saying it loud. Obviously, we are not in a big anonymous city anymore and this feeling of small community of wanderers is recomforting when so far away from home in the middle of the nature immensity. 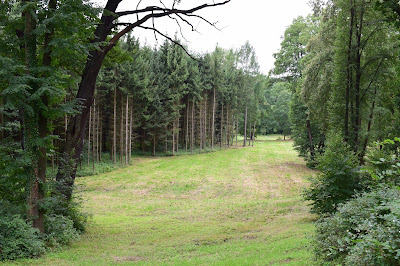 Designed starting with 1815 by Prince Hermann von Pückler Muskau, the natural park is considered an extraordinary sample of landscape architecture. Impressive is not only the balance between various types of trees and plants but also of natural habitats, from forests to small ponds and beds of flowers. 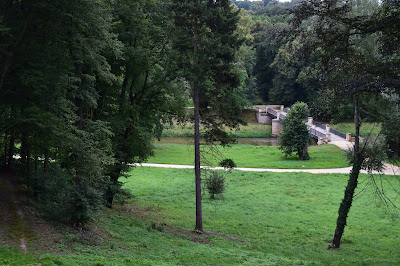 As we walk slowly, we hardly notice that in fact we went one level higher. The terraces are easy to hike even if you do not have too much walking experience. 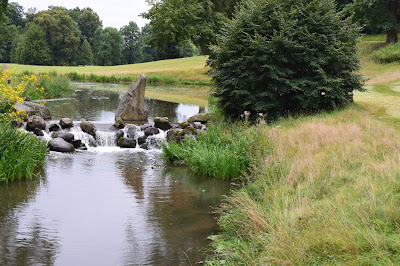 The nature was not too much visibly changed. The manmade elements, such as stones in the middle of the river, are aimed to bring just a discrete touch. 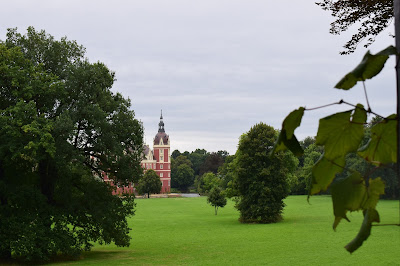 There are many small kiosks or picnic places where you can stop and have a meal in the middle of the nature. After so much hiking, I preferred to find a resting place with a view over the castle. 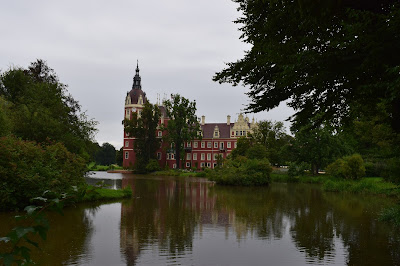 German castles are my newest fascination and in a next post I will reveal some fantastic travel plans I have for the next weeks. In more than seven years of expat travel life in Germany, I visited a cople of castles, but Bad Muskau took my heart as one of the most beautiful I've seen so far. I am aware that most of the spectacular effect for the viewer is the result of the natural location and wild yet mancontrolled vegetation. 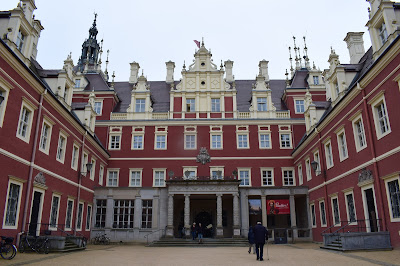 The Prince Germann von Pückler is a fascinating personality in itself, as the castle exhibition reveals it. He wrote travel books based on his journeys in Europe or North Africa, spent a lot of time in England where he become familiar with the rules of the landscape architecture, but was also a heart breaker. He even gave his name for an ice cream. 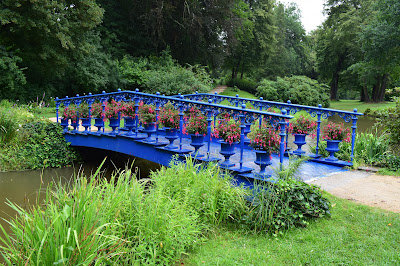 There are many things that you can find out about the history or geography of the place and his former owners, but nothing tempts me more than the return outdoors and just another small tour before I have to go. A beautiful blue small bridge bordered by flowers is my reward. 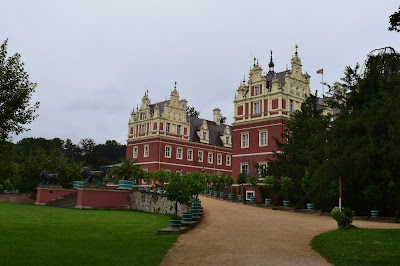 The castle, that from 1245 until 1924 went through frequent reconstructions and embelishments, that melted quite well in an unique style, offered inspiration for my mind and the camera. My time spent here was short, for sure, and asks for a new visit in the foreseable future, but for now, I am happy that finally just another travel dream come true. And miraculously, it generated just another 5 more travel dreams.

For more pictures, check the dedicated Pinterest board here
Posted by Ilana WD at 1:27 AM