I did not have great or any expectations at all when I boarded the one hour train from Berlin to Neustrelitz. All I wanted was to enjoy a sunny day while eating at a restaurant with a view over the lake. Not that much, isn't it? However, there a different travel reality was expecting me... 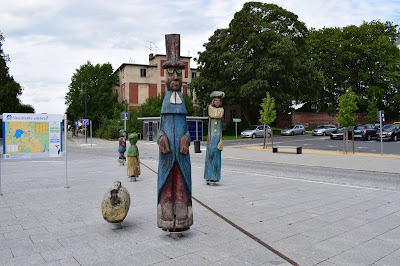 Some funny wood creatures made my feel like I landed in Wonderland. Between the taxis and buses coming and going, an announcement that Neustrelitz is a theater city too revealed unknown information about my destination. All over the road, announcement of an Anatevka - Fiddler on the Roof - play to be held in the next weeks confirmed the apparent love for theatre here. 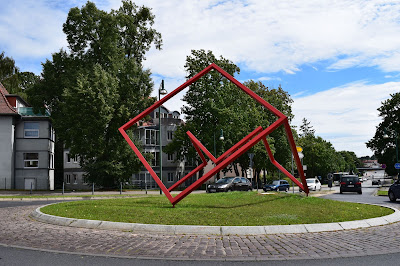 The street views are the typical former-GDR ones, with beautiful houses newly painted in the middle of dilapidated constructions. While I was thinking fast about the potential of the real estate here, a huge red construction at the Friedrich Wilhelm street crossing gave me an idea about the possible future of this city. 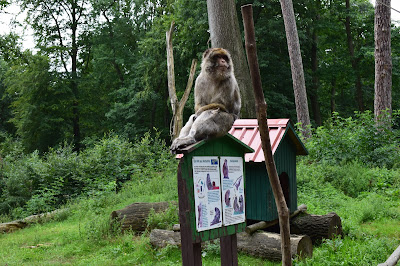 I've been to many zoos in Germany and elsewhere, but I did not expect to meet little deer and nervous monkeys roaming worryless near children and adults. As long as it is not dangerous, I found it an excellent way to become familiar with the animal world. 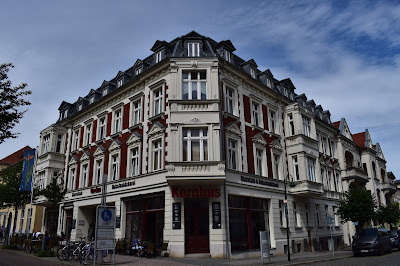 Back from the wildlife, we took the Strelitzstrasse direction center, with many shops and outdoors restaurants and caffes. I did not expect to see so many young people, not only tourists on the way with their bikes. Everything looked friendly and welcoming, inviting you to stay more for another bit of cake or even more. 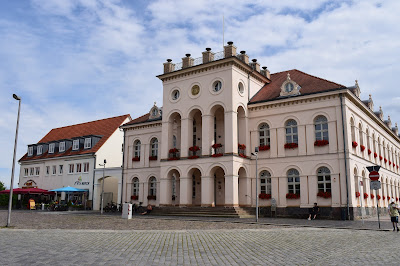 The central area is quite shining and looks like just at the end of a massive renovation work, with a bright white city hall building, with classical volumes ratio and children playing around a fountain. Originally, it was built by a disciple of my favourite architect, Schinkel which explains my instant attraction to it. 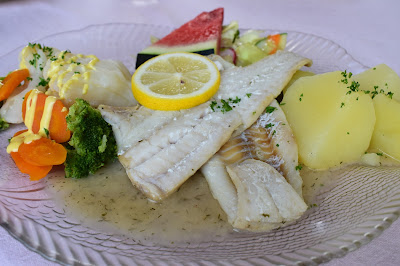 Too much walking - especially in the middle of the forest of the Tierpark, the local name for the zoos here - increased my appetite so apparently I had to cancel my plan of a meal with a view over the lake, At Luisenstube, a small traditional restaurant of a Gasthaus - inn - I had my rich portion of fish, with a nice adornment of vegetables and even some fruits - oranges and water melon. The service was quite fast and while we were the first customers of the afternoon, in less than 30 minutes more people took their seat at the wooden tables surrounded by small boats and many flowers. The meal was tasty but  a bit pricey compared to the Berlin standards, but worth every dime, especially given the friendly customer service - not Berlin standards, happily. 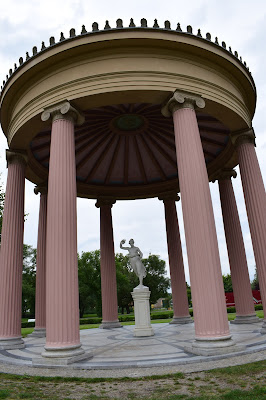 Ignorant about many things I just discovered here, I knew that Neustrelitz has a very beautiful castle gardens, without a castle - which was destroyed in 1945. It reminds of the glory times of this locality, with a history that starts in the 13th century. At the beginning of the 18th century, the entire Strelitz went through a fire and had to be rebuilt, hence the 'neu' - 'new' addition. 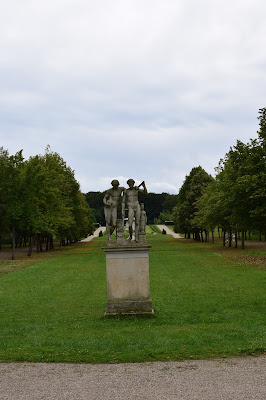 A walk in the castle gardens is a real pleasure, in the wet air of the after rain, and in the middle of  more or less friendly stone creatures. 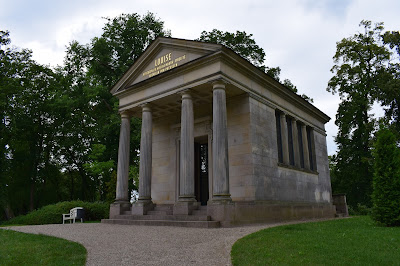 On the top of a hill, a Greek temple hosts the tomb of Queen Louise of Prussia, born princess of Mecklenburg-Strelitz. 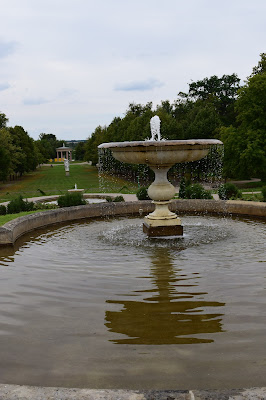 The mixture of styles - from classical to neo-classical and neo-gothic makes the trip like a journey through the history of arts, the German edition. 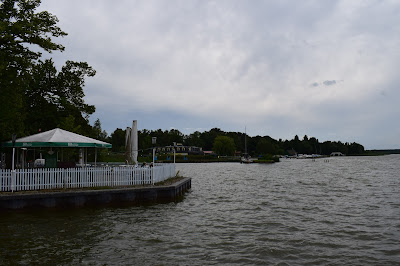 The cultural experience continued with, finally, a tour of the lake Zierker area. 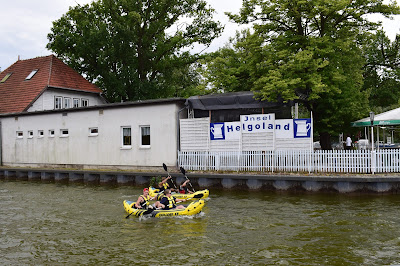 There are leisure boats parked on the shore, or you can have your group ride, with the Weisse Flotte. The professionals prefer to use wisely their time, improving their progress until the next competition. 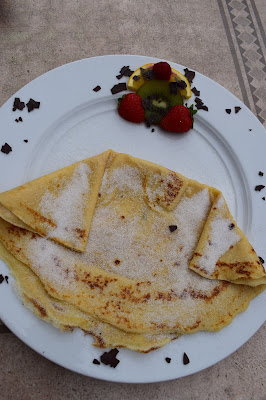 If I missed the chance of a lunch overlooking the sea, maybe I am luckier with the dessert. At the Hafencafe, the crepes are delicious and decorated like an abstract canvas. 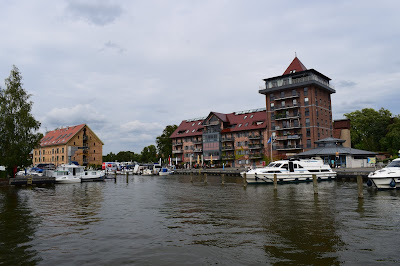 The view is really beautiful - if you look at the sea, as the brownich building colour is nothing but attractive. Tourists mix with the locals and children on holiday watching their phones non stop. I am not sure how the place may look during a day of winter, but summer and autumns are just the perfect season to visit it, 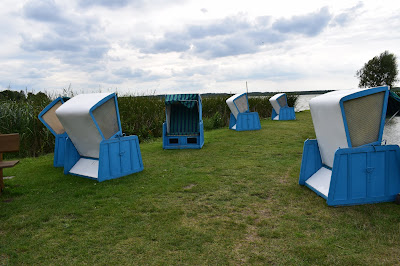 Those looking for a more private and quiet retreat, Zum Fisherhof - both selling and preparing fish-based meals, accompanied with a classical German beer, are a better choice. The fishermen nets were put to rest, after what was probably a very successful morning at the lake. Bootshaus and the 60-year old Insel Helgoland are other choices for those looking for both a great view and a tasty lunch. 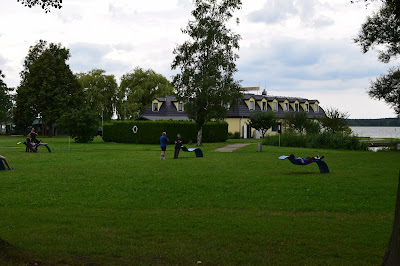 It is a bit too late for me, so no time for a late dinner with a lake view. The park near the Bootshaus surprise me with its futuristic benches where people can rest on some wave shaped benches and swing. What a difference with the idea of park on the other side of the street, at the former castle, where people are supposed to relax while walking in the middle of a man-made landscape. 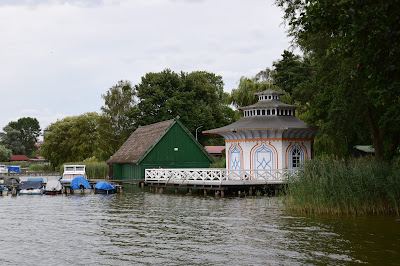 The last leg of the trip is a short visit at the Slawendorf colony, with its small houses in the middle of colourful flowers. A white bridge connects two very narrow pieces of land, from where you can reach a Chinese pavillion. It is the quietest part of Neustrelitz and probably the refuge for anyone looking for some morning medication or just a fresh start into the day.
In a couple of minutes, after a short walk in the middle of trees, I am back on the streets, walking fast to arrive at the train station. Neustrelitz was such an unexpected surprise and I am glad that my original plan was so nicely challenged.

For more inspiration, check the dedicated Pinterest board: https://de.pinterest.com/ilanaontheroad/neustrelitz/
Posted by Ilana WD at 1:51 AM