An accidental visit to Stralsund

I arrived to Stralsund by accident. Initially, I bought my Quer-Durchs-Land Ticket and prepared a trip to Bremen. But as usual in the last months, my plans are not aimed to always work and I ended up in a completely different place. The main advantage of such a ticket is the price: 44 Euro for one adult, wherever you want to go, from 9am to 3 am. If you want to take another adult, he or she will pay 6 Euro, if you travel with a child under 14 yo, is free. The disadvantage is you cannot travel with ICE, the fastest - and very expensive even for a generous travel budget - trains and thus, one should rely on the local connections and commuting options. When we realized that only one way to Bremen was 10 hours and we did not plan to stay overnight, we used our spontaneity and headed to the closer and newest and interesting-sounding location nearby. And we chose....Stralsund.
The city of architecture
We reached our destination after 3 hours of travel, with many stops every 7-8 minutes. The weather was nice and we passed by the usual poppy flowers and fields and some lakes. There were not too many tourists or passengers in general, except some groups of teenagers starting the vacation with a trip 'in the countryside'.
And, here we are, in the city of Stralsund. 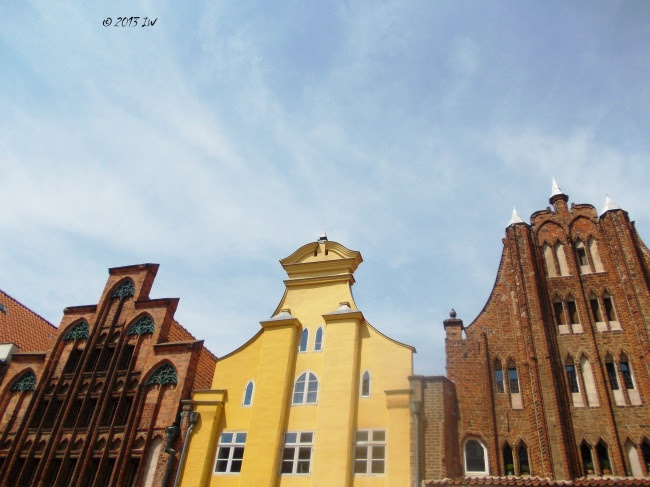 At the train station it is a small information office where we did grab some leaflets. We followed the arrows and headed to the 'center' of the town, 20 minutes by foot from the station. In case that you want to keep more energy for the rest of the trip, you can also take a cab or a bus. For the bike lovers there are good news: their space is bigger that the one for the poor walkers. We did not find any bike renting place though, so you better take your own.
Everything looked quiet and pleasant, with many parks and a lake and teenagers heading to the swimming pools. It was a very hot day and we hoped to get a little bit of tan so we preferred to spend as much time as possible outdoors. We decided that we will not go to any museum, not even to the famous Ozeaneum, creatively designed by the architects in charge with the constructions of the Olympics in Munich, in 1972.
However, we did not regret our decision and our cultural interests did not suffer. Any corner of the city offers a sample of the history of architecture. The city is included in the UNESCO World Heritage due to the richness in terms of history of urbanism. The first houses, reconstructed in the 1990s, were built in the 1320s. Even many of the constructions were affected by several big fires and wars, and the communists wanted to destroy parts of the old city the most important areas are still left and were massively rebuilt with EU and UNESCO funding. 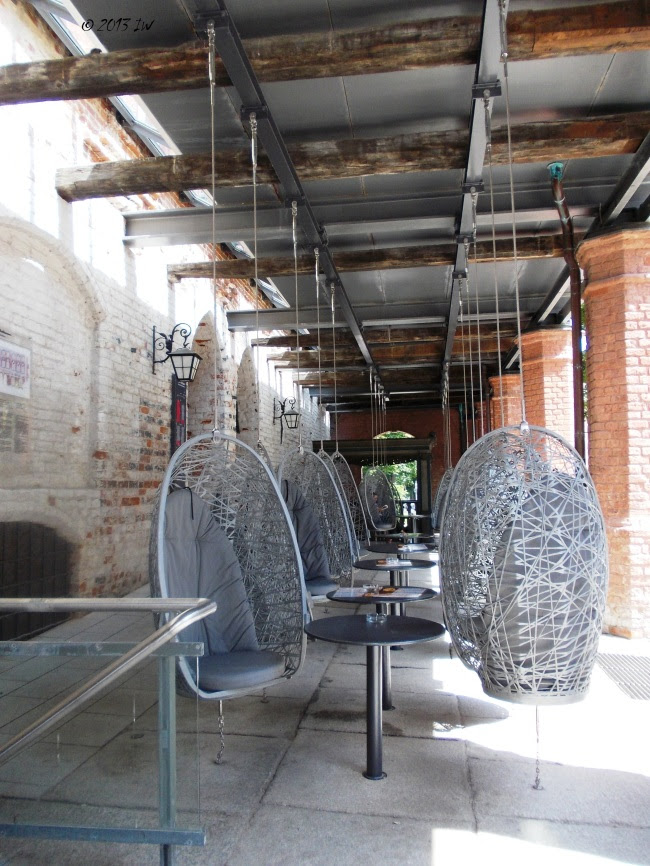 One of the most interesting buildings is the town hall. Turned into a gallery of traditional shops and small cafes, it was originally built in the 13th century. In 1750 was completely redesigned in the Baroque style that is still preserved, especially when you look at the decoration of the slim columns.
Those interested to find out more about the town, can take a mini-car tour that goes every 30 minutes, or to visit the Kulturhistoriches Museum. There is an information center situated close to the Town Hall, but the information is available only in German, the language spoken by the welcoming ladies working there. We did not see too many English speaking tourists, but quite a lot of Swedes, visiting the city in big tourist groups. Most probably they find more than one reason to feel at home, as many of the houses reminded me of Lund or any other small Swedish villages I visited some years ago.
What to do and eat in Stralsund
Stralsund was former prosperous Hanseatic city of major importance - here was signed the famous Treaty of Stralsund - with a rich multi-kulti heritage - as Wismar, it was Swedish for a while. It keeps a certain middle-class way of being: you may find a lot of local restaurants - and less Italian, Chinese or Thai food - serving fish and varieties of local cakes or bread. The prices, especially in the places with a sea view, are not cheap. The fish menu includes: Bismarck herring, needle fish, smoked eel and a large variety of fish sandwiches.
As a respectable city of sailors - a monument for those who died on the sea is situated close to the promenade - it has a lot of whisky shops, most of them made in Scotland. We spotted two local varieties: whisky salami and rum salami. You drink while eating, and feel happy at the end. Another local pride is the Stralsund marzipan that compared to the famous Luebeck marzipan is less sweet, we were told.
As it was summer, the ice cream parlours were everywhere, offering Italian 'gelato'. The bakeries are serving local joguhbrot. We found a Bio place - Bio Insel -  close to the train station, for a coffee with soya milk, available from 7 to 7 daily. The service was pretty good but with a more than 30C outside, using air conditioning is part of the human rights chart, I suppose.
For the shopping lovers, there are many local brands and nice looking shops where you can find pretty nice clothes, and the sale season is just at the beginning. I've found a lot of local galleries, selling unique ceramics and nicely designed clothes, jewels or postcards. If you are looking for a nice present back home, there you can find many creative ideas.
The land and the sea 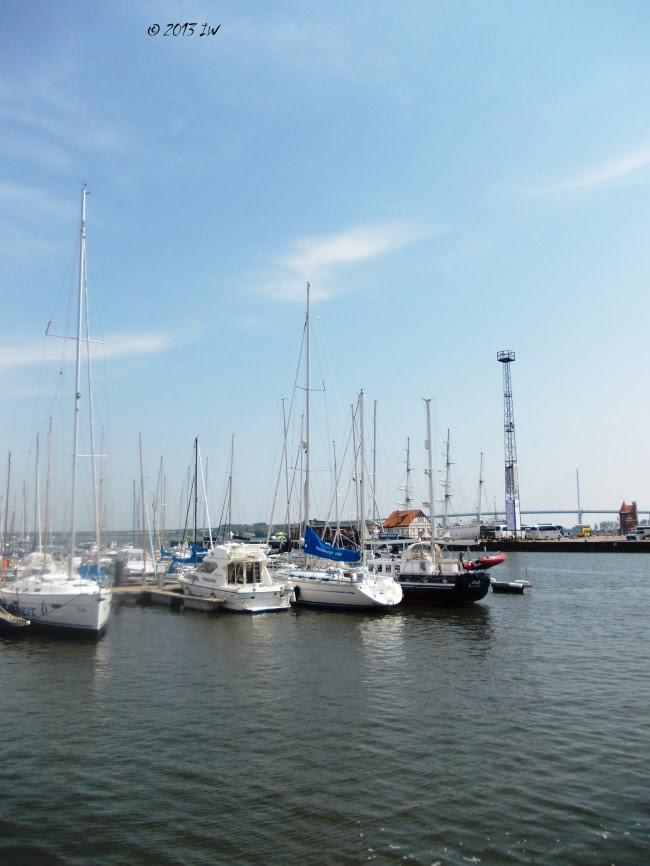 The most relaxing part of the trip for us - that helped to get rid of all the bad energy after we discovered that we cannot go to Bremen that day - was at the promenade. Going slowly, looking at the boats or watching the experienced fishermen, doing nothing, thinking about a long vacation at the beach, enjoying the hot days, the sun and the clear sky - that did not last more than 2 days...
From Stralsund, on the other side of a bridge, one can visit the Island of Ruegen and even a thought of trying to see it too went through my mind, I gave up for a next time when we will have more time to explore it. One of my friend told me recently that she spent a week in Stralsund commuting every day to the island, as it is cheaper to find a good accommodation to a hotel or private residence here than at Ruegen.
Most probably, when and if we will visit Ruegen, we would like to have a fish at one of the promenade restaurants in Stralsund. The city is clean, interesting for history and architecture lovers and welcoming. Maybe the next time we will visit the Ozeaneum too.
For more pictures from Stralsund, visit my dedicated Pinterest board: http://pinterest.com/ilanaontheroad/stralsund/
Have a look at a sample of the summer time in Stralsund on YouTube: http://www.youtube.com/watch?v=JBFE0uwSuhE
Posted by Ilana WD at 1:19 AM