Naumburg, a Romantic destination in Saxony

I've first read a short travel recommendation for Naumburg a couple of years ago, in Switzerland, as a short article in a publication of the local rails featuring a brave Swiss that decided to relocate here to take care of the historical tram. However, not the tram story stayed on my mind, but some panoramic pictures featuring local buildings from the historical city. After more than two years, the images were imprinted strongly enough on my brain for taking the (good) decision of booking a day trip here. 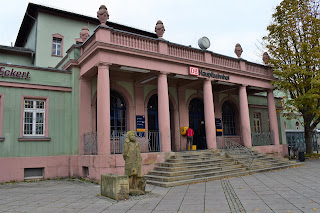 We arrived at the end of October, after a one-hour drive from Leipzig. The pistachio-pinkish classical train station sent from the very beginning the encouragement signal that good travel things are about to happen this day. Nearby, there is the end stop of the historical tram, but I decided that I will exclusively explore this city by foot. 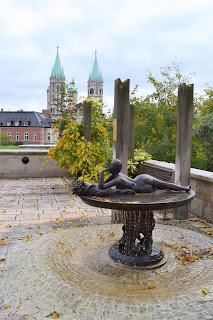 We went on the Markgrafenweg, walking on cobblestone streets covered in yellow fall leaves. with beautiful views over the hills with still green vineyards. Am Georgentor, we tried to avoid the construction work under way and ended up in the front of the Oberlandgericht building - Higher Regional Court - an architectural staple of the city. From the garden organised around sculptures and small fountains, one can see another symbol of the city, the twin-towered cathedral. 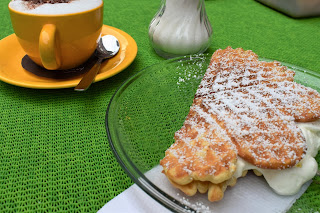 At the Domplatz, we made our way through numerous groups of tourists, most of them German. If one is not too much into religious sightseeing, on a small street nearby, there are small artist workshops to have a look at, displaying from pottery to stained glass. One street away, there are many invitations to taste some of the local wines, as Naumburg,  is part of the German Wine road - Winestraße - offering specific Saale wines. As for now, I decided to stop for a short home-made waffle stop, at the Wafflestübchen. 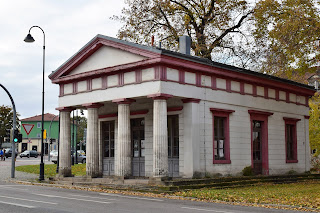 Although the city is having a huge Cineplex with the latest movie productions, for those looking for exquisite pleasures, the local theatre is an exquisite destination, playing that season Faust, among others. The Antiquities stores alternate with modern day interior design and mass consumption products. 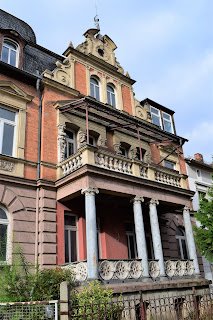 In the area around Am Saltzor, the architecture offers an example of elegance, with the heavily yet classically balanced decorated facades. Some of the balconies are large enough to set up a dinner table for a Romantic or family dinner, or just to spend the afternoon people watching. 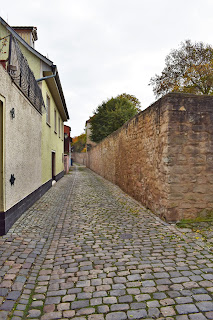 As in many classical German cities, Naumburg kept almost intact the ancient city walls, whose historical layers bring an air of distinction and pedigree to the relatively newest buildings. 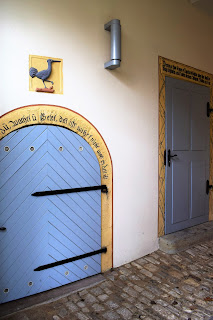 If one is curious enough to have a look behind the massive wooden doors hiding some buildings, it will find interesting testimonies and wise advice about life and everything, written in old German alphabet, or just offer a pleasure to the eyes by looking at the joyous colour combinations. 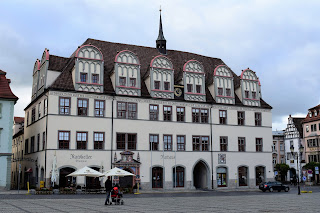 The central square - the Markt - hosts every Saturday a market of local products. The hustle of people looking for the healthiest and cheapest offer cannot hide the beautiful architecture surrounding the place. 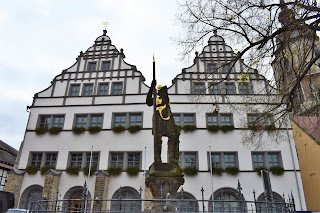 Some corners make you think without too much effort at stories with princesses and brave soldiers ready to fight until the last drop of blood defending their honour. At least this central area of the city is so well preserved that I felt that I am actually part of a time travel adventure. 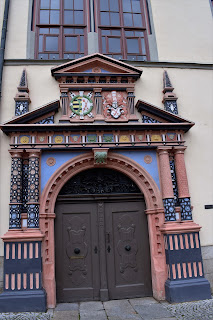 The colourful views are everywhere, from the Salzstraße, with its small local stores, until the Straße der Rom, with the Antiquities stores or the shopping avenue - with a very local flair - of Herrenstraße. 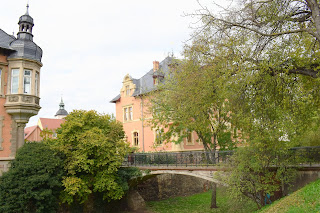 But out of so many beautiful streets and buildings, there is no other area more interesting and Romantic - yes, I know I am using this term excessively, but this is a good match for many of the corners and buildings I've seen in Naumburg - than the Marienring area. A green area with elegant big houses, where one can go after crossing a bridge hidden by vegetation. 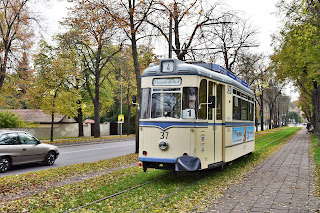 The brave Romeo can come with the historical train, for instance, to be sure that we keep at pace with the times. The small tram makes a round 2 km 1/2 stretch around the city, just another cute presence in a city whose corners are an invitation to more and more day dreaming. 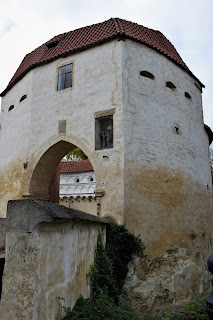 The 14th century Marientor, one of the former city outposts is nowadays only a historical living proof of the old times, or an interesting destination for the curious travelers, as me. 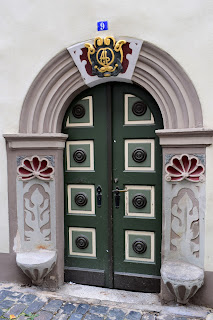 To add more on the list of attractions not to miss in Naumburg, the colourful massive doors are a gay presence that makes every single building an individual, unforgettable, presence. 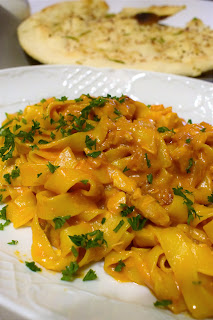 After hours of walking and many more exercises of admiration, a foodie stop is more than recommended. At the Italian Firenze in the Marktplatz we are treated as princes and princesses, with delicious tagliatelle. The restaurant is also very children and family friendly. 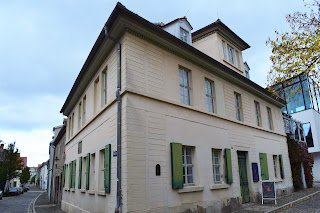 One day is never enough to cover extensively a destination, but I am always doing my best. Part of the to-do-list in Naumburg was also the small memorial house dedicated to the controversial German philosopher Nietzsche. He moved here with his mother in 1850 where he attended primary school, his former house being nowadays a museum. In the immediate vicinity, a massive glass and iron modernist building hosts the Nietzsche Documentation Center, apparently the most important dedicated to the philosopher in Germany. 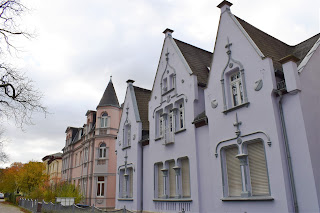 Daring to go out of the comfort zone, I am spending my last hours in Naumburg looking for things not usually included in any guides. As, for instance, the beautiful houses from Burgergartenstrasse, with stained glass entrances and exterior walls painted in pastel colours. 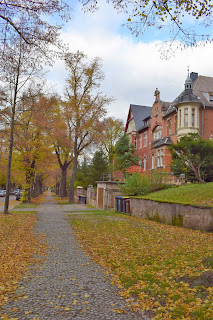 After exploring the foliage covered alleys of Burgerpark, I continue the admiration of the architecture on other streets nearby, such as Charlottenstrasse or Linenstrasse. Only looking around you may feel good and at peace with all the craziness and nuts in the world. 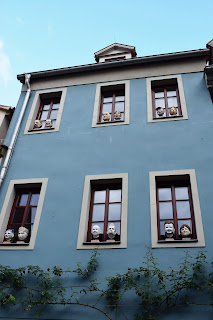 Some of the artists living here wanted also to ask the passers by to think and look and educate their sights for arts, such as the ceramic figures hanging out of the windows, featuring famous Germany, among which Nietzsche and current chancellor Angela Merkel. It is the work of Heike Minner on Weingartstrasse. 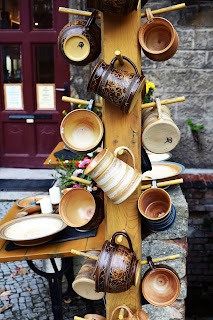 Leaving Naumburg was as being expelled from Wonderland. It was a pleasant, inspirational and...yes, Romantic discovery where I can wait to return soon.

For more inspiration, check the dedicated Pinterest board: https://de.pinterest.com/ilanaontheroad/naumburg-an-der-saale-germany/
Posted by Ilana WD at 7:48 AM