Joy of life at Ludwigslust

If someone asks where the highest concentration of castles in Germany can be found, Bavaria is automatically mentioned, but besides this part of the country, other areas, including in the former East, do have many interesting places for castle-hunters. Mecklenburg Vorpommern is one of them, and after a couple of experiences at the beautiful Schwerin castle or more recently in Greifswald, one of my new year travel resolutions was to explore more of this area. After a serious documentation, I decided for Ludwigslust. 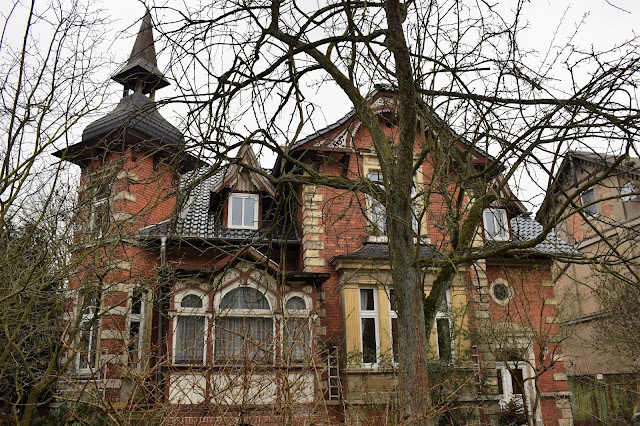 With the ICE, there is one hour of smooth ride until the destination. From the train station, I slowly followed the directions until the central area, passing near castle-looking red bricked houses. 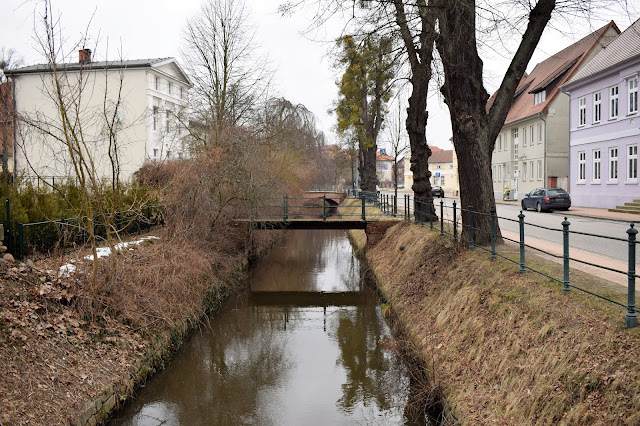 Kanalstraße is made of a network of bridges connecting the main street to entrances to mansions or schools. I visited on a Wednesday and the streets were mostly quiet, with a sense of calm that may be hard to find in the big urban agglomerations. 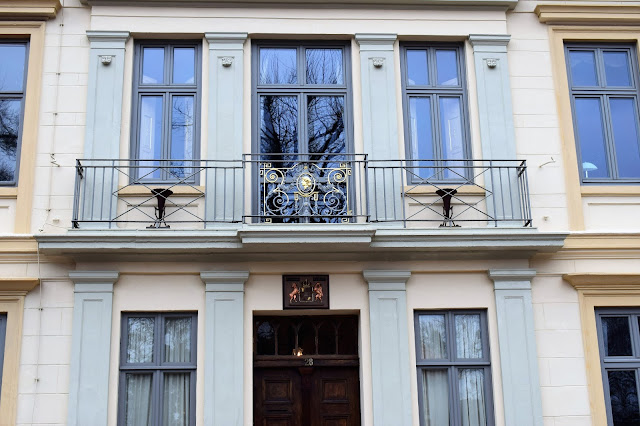 The sense of balance is given by the classical shapes of the houses on Kanalstraße, many of them painted in pastel colours of pistachio or even light shades of pink. After so many red-bricked serious constructions it brings a sense of joy around, even though there are not too many people on the streets to share the feeling. 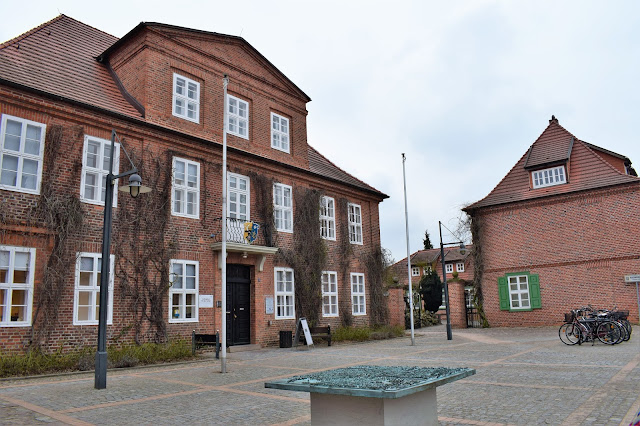 From there, we arrived directly at the busy Schloßstr., the street where the main shops, restaurants and institutions are situated. We are back to red and a sense of seriousness. The small city hall - compared to the majestic buildings hosting such institutions  -, with a metal mold of the city close to the entrance, is the historical place where the papier mache used for the decorations of the castle was created, between 1780 and 1871. In 1876 the building was assigned as a city hall, and in 1945 was also used as a police station and prison. Near the city hall, there is the Information Center where the visitor is generously offered a lot of directions and interesting details about the city. A very professional service that deserves my fully appreciation. 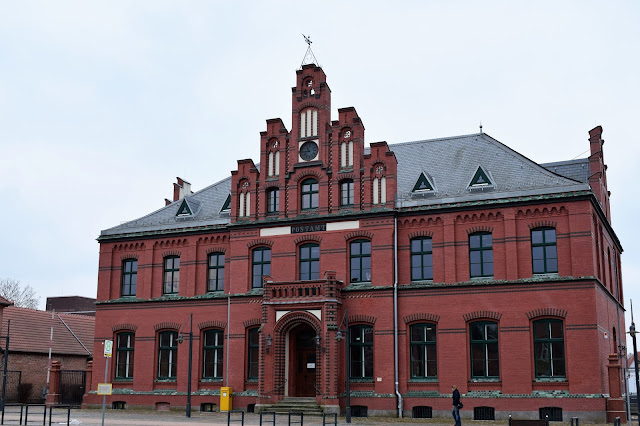 On the other side of the street, another important institution for the German localities - the Post Office - reminds me a bit of the special architectural style of the buildings in Greifswald. 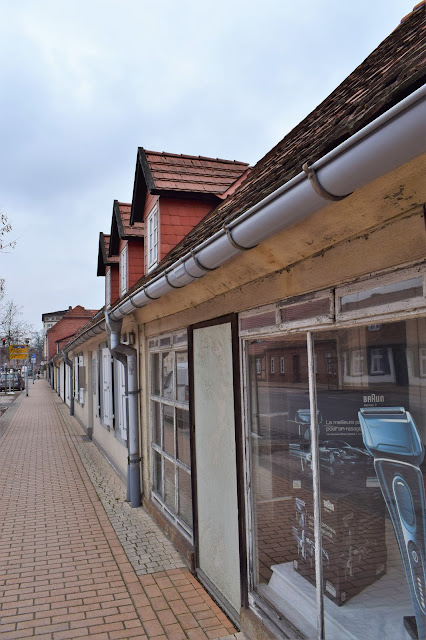 Generally, everything in Ludwigslust is about small sizes. Like the disciplined lined houses on Lindenstr. looking well suited for small people like me. Or for anyone interested in minimalist living in general. 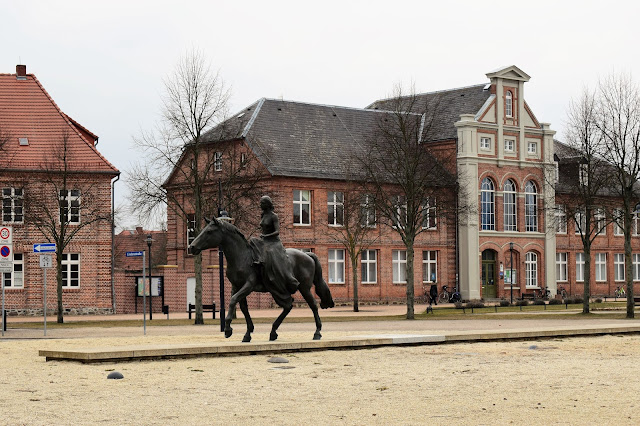 On the left side, Schloßstr. ends in a round square - Alexandrinenplatz - surrounded by red-bricked buildings, with a representation of a local princess on a horse in the middle. From there, you can arrive in the very modern shopping center of Lindencenter. 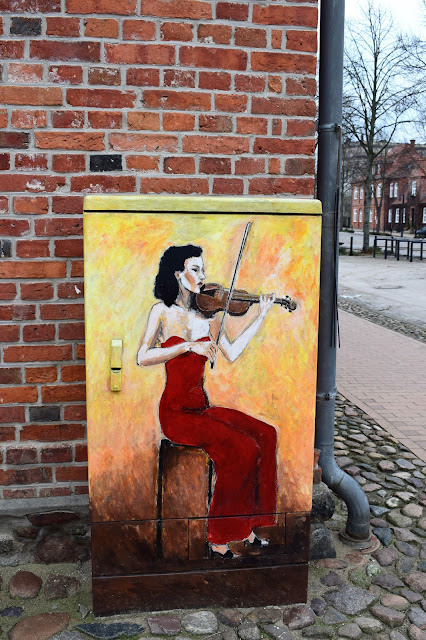 A city visited during the gray months may give the visitor a completely wrong impression. Unless you have discovered some colourful spots. All over Ludwigslust, the covers of electricity - or phone - boxes are painted with scenes inspired by musical activities. A very welcomed initiative. 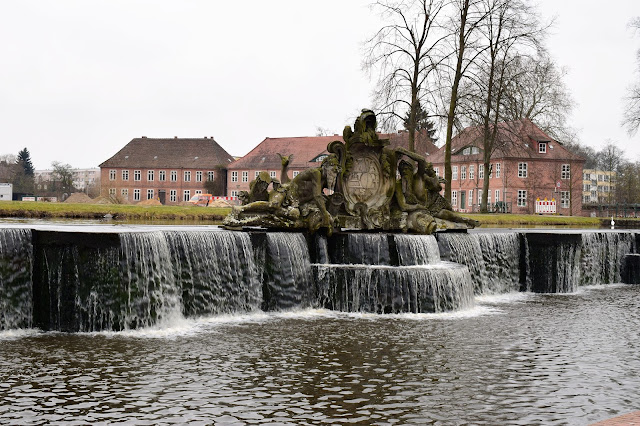 After another ten minutes of wandering around, I arrived in the close vicinity of the castle that made this town famous. A couple of meters away in the front of the entrance there is a system of waterfalls created to add more impetuosity to the construction. Mythical stone representations in Baroque style are recreating a new symbolic world. 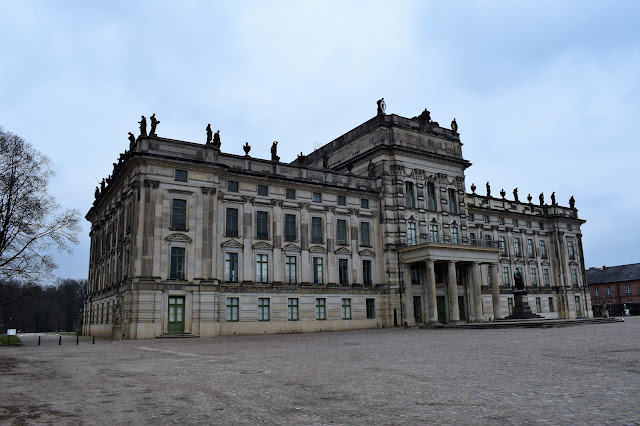 And there is the castle, a huge construction made of small rectangles of windows added layer after layer. Without the statues on the top of the terrace roof edges, it would have been just a classical building, but the statues bring an air of mystery - especially if wrapped by the night lights - and joy. 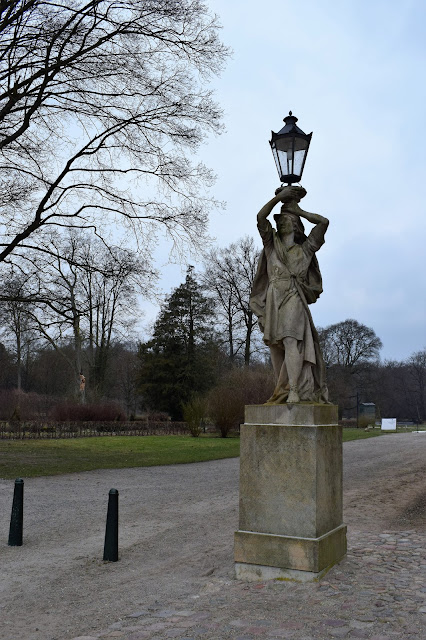 At each corner of the castle, a statue with clothing details very well represented is carrying a lamp. We are still talking about classical style, but the baroque will soon challenge completely the rules of the artistic game bringing closer the modernity. 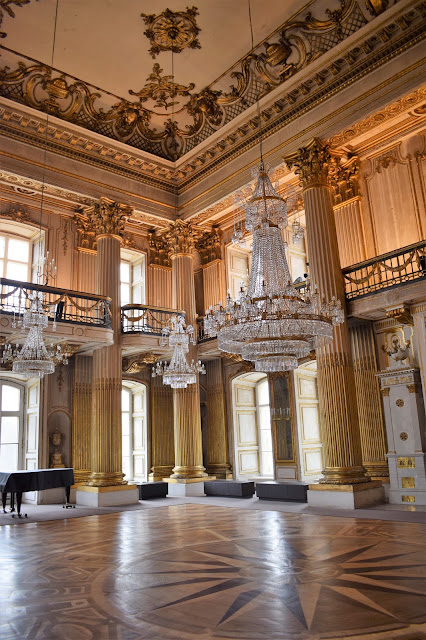 And there is the interior of the castle revelaed, that may surprise you compared to the classical facade. Now, you are getting closer to understand the reality of its name - Ludwigslust - Ludwig's joy. In the first half of the 18th century, Prince Ludwig, Duke of Mecklenburg Vorpommern started the construction having in mind initially a hunting lodge. But the more the plans advanced, the more the castle was becoming a refuge and a work of art aimed to enjoy the eyes of the residents. As the costs were increasing dramatically, Prince Ludwig decided to use instead of the usual gold coverage, papier-mache, produced at the local factory. Uniquely in the world, the overwhelming majority of decorations are made from this special material, that at least visually, creates the same effects as the expensive stuff. Everything is about knowing how to enjoy life, after all.
The first room you are introduced is the enormous Gilded Hall, with its high Corinthian columns and the enormous 4 candelabra - representing the four seasons -, produced in Rostock, a destination by the sea in the North of Germany. On a classical music background, the story of the castle is told through a recording, long enough to have time to admire every inch of the room. The Victorian lamps were designated by Schinkel and are made of wood bronze. 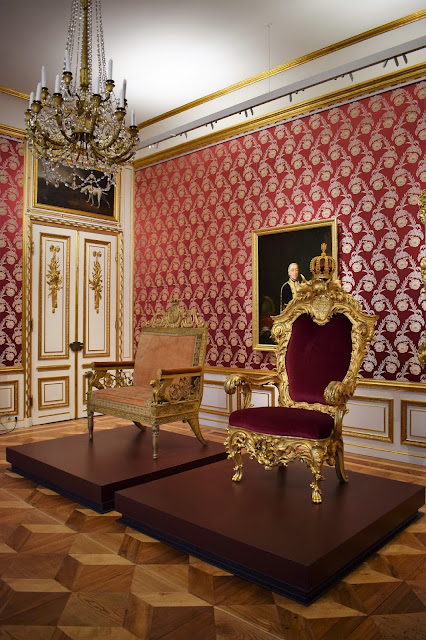 For almost hundred years, between 1765 and 1857, Ludwigslust - whose castle is often called the Versailles of the North - replaced Schwerin as the capital city of Mecklenburg. The throne hall shows the symbolic place and activities taking place in the castle. The floors with small tiles creating extraordinary perspective effects are another noticeably element of the interior design of the castle. 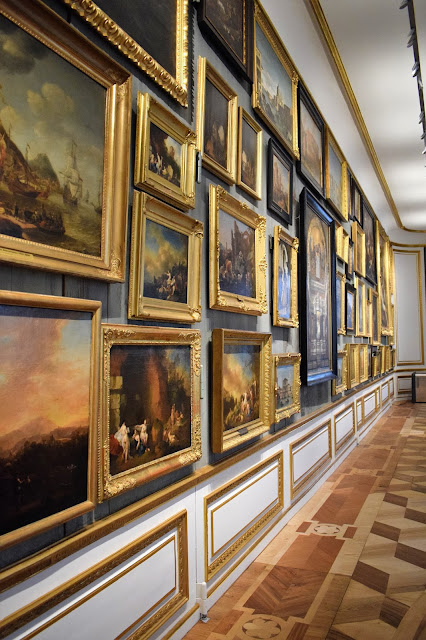 The castle is in permanent renovation process, with many halls and rooms still under reparation. The latest stage lasted around 6 years and was dedicated to re-open to the public the painting collection. The art lovers can admire at the castle an impressive selection of Italian painters, but also Dutch and French, many of them made by various court artists invited from all over Europe to Mecklenburg. 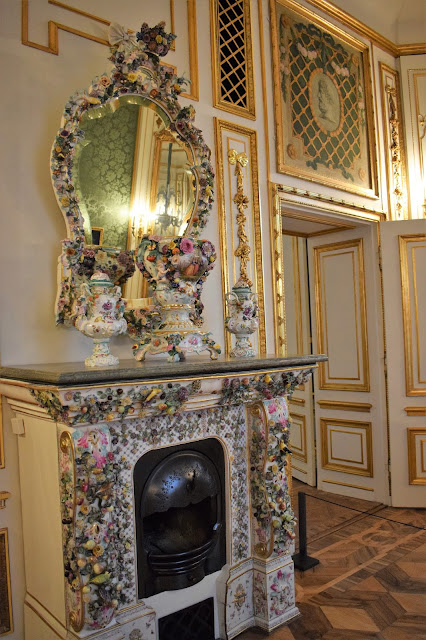 Each room has particlar elements of decorations, with mirrors creating the impression of bigger spaces and the golden decorations outlining beautiful details of every corner. For every space and detail of the castle, extensive information in both English and German are available, which helps the visitor from abroad or the neighbouring city to better understand the history and the cultural meanings of the place visited. 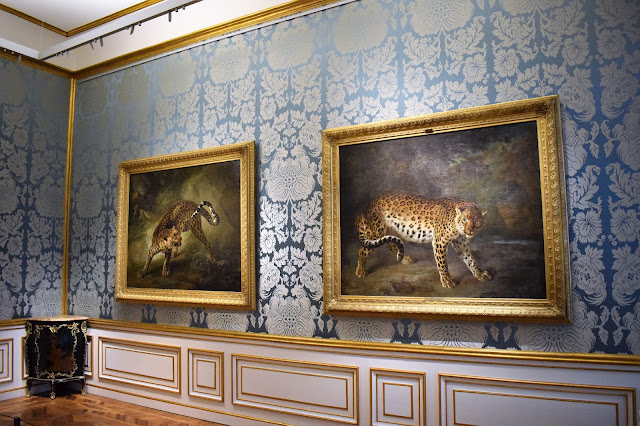 As the initial destination of the castle was to be a hunting lodge, there is no wonder that one can admire here the monumental hunt game pictures by the Rococo French painter J.-B. Oudry, whose works I had the occasion to admire also at the Musee des Beaux Arts in Nantes. Duke Friedrichs was also interested in clocks and various technical mechanisms, and an intresting collection of clocks can be admired at the castle too, besides hunting gear. 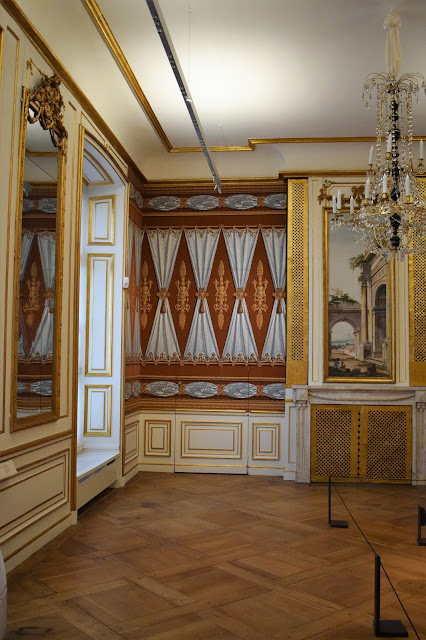 Every room has its charm and observing the fine decorations made out of papier mache increases the admiration for human creativity and innovation. With so much work underway on the other side of the doors of the rooms, I can't wait to come back to see more beautiful details brought back to life. 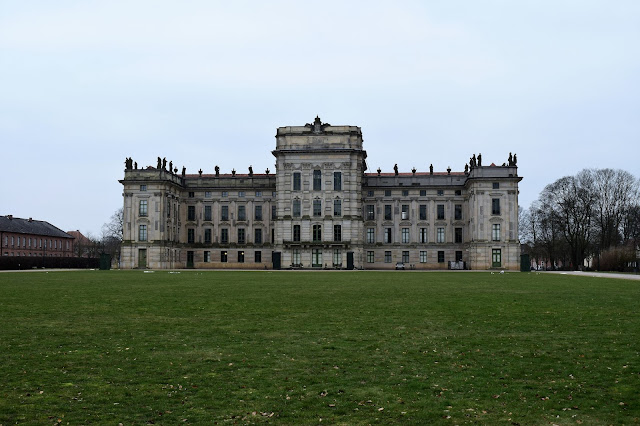 It is a crispy day, with the cold strong enough to kill the joy of life. The castle is surrounded by a 120 ha area of garden. 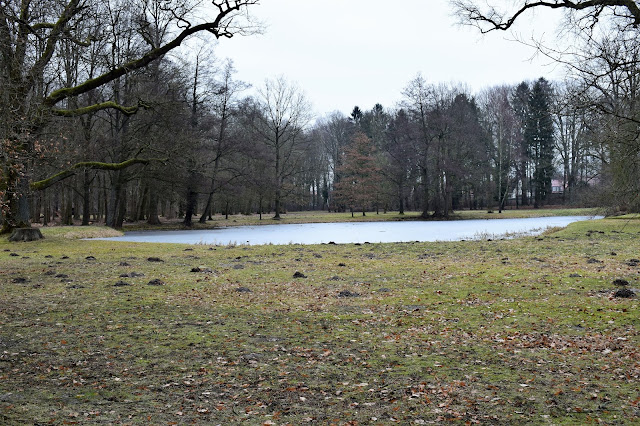 At the time of my visit, everything was frozen and not necessarily inviting. However, both local people and various presentations of Ludwigslust recommend the castle's garden as a must-see destination during the spring and summer months, particularly for the tapestry of flowers and the various art works created by flowers. A serious reason to come back soon in the next months to see what the serious German travelers consider as one of the most beautiful gardens in the country. 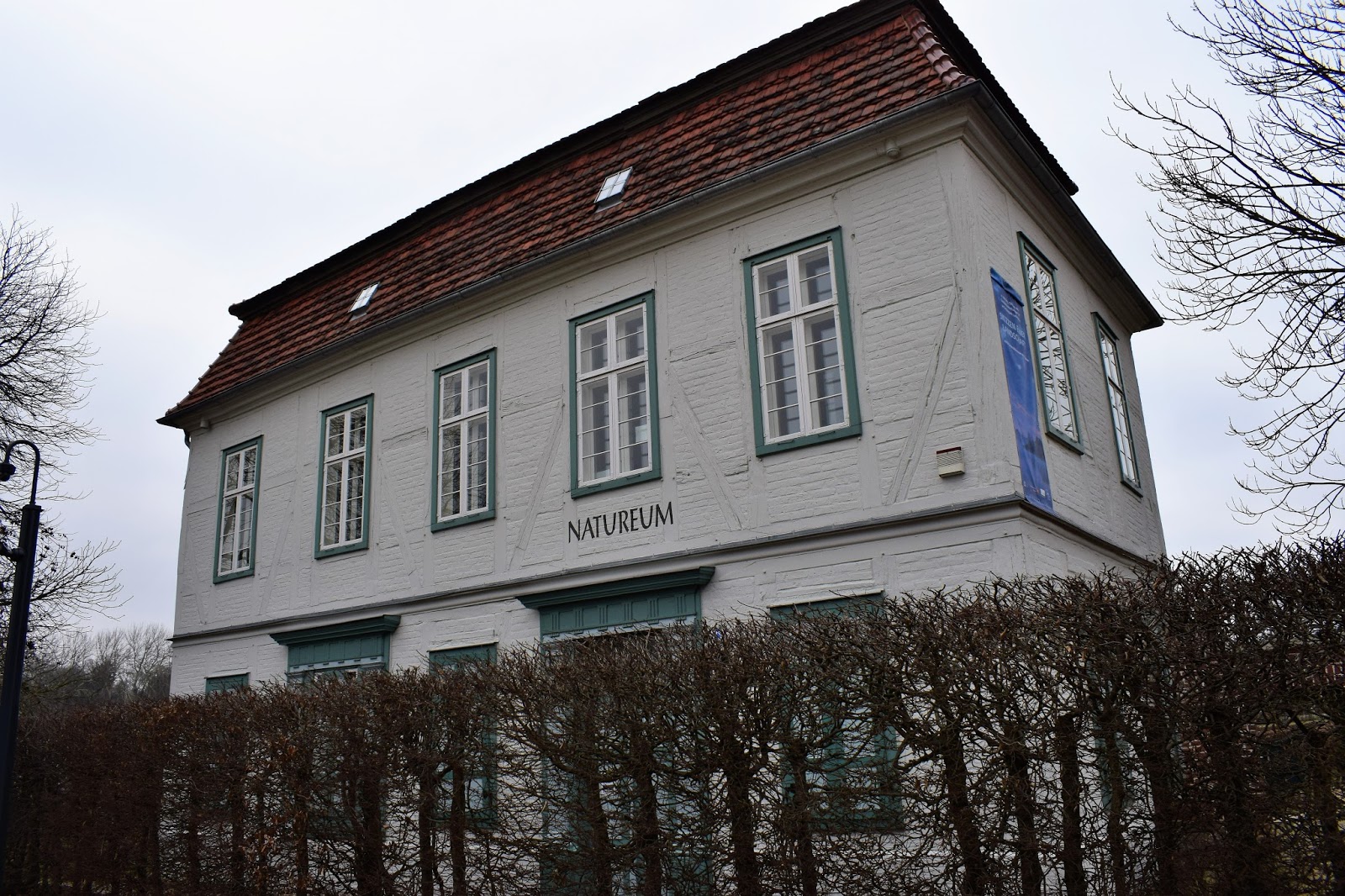 Close to the castle, near the park, there is the Natureum, considered the oldest house in Ludwigslust, hosting the first natural museum in Mecklenburg. 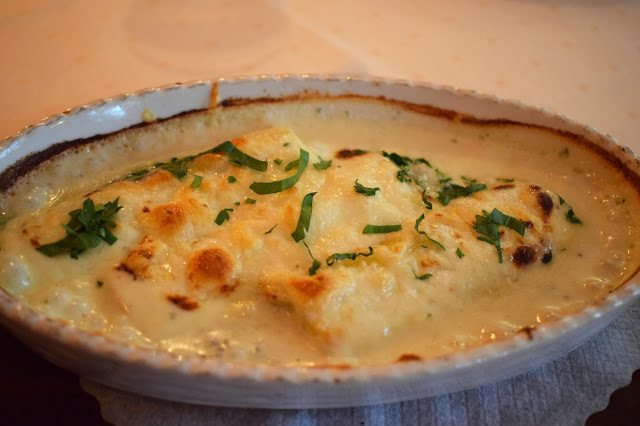 Before leaving this town, I want also to give a try to the local food selection. On the way to the castle, I spotted many bakeries or even a coffee house with classical sweets, like Konditorei Uplegger. For my lunch, I decided for Tutti Gusti, on Schloßstr., offering Italian - Sicilian influenced - meals with a Middle Eastern flavor. The interior didn't look special or very much took care of, design-wise, but the service was very fast and friendly. My first meal was a canelloni with spinach, in a generous gorgonzola sauce. Brough warm, it had discrete traces of nutmeg that balanced the saltiness of the cheese. 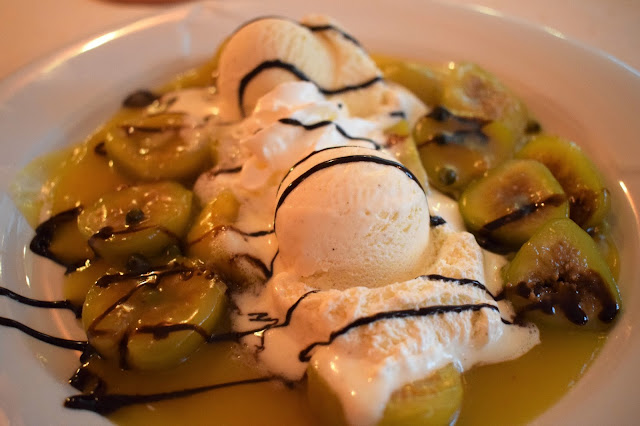 The dessert was a special combination of: figues in orange sauce, with green pepper covered in icecream and wipped cream. It sounds delish and it also tasted so, even though a bit too sweet and without noticeable influence of the green pepper.
The prices are fair and given the high concentration of people in this place during the lunch hour it means that this is a loved spot for the locals as well. 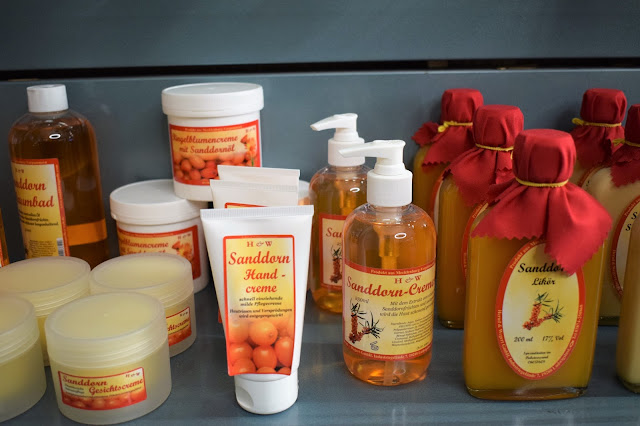 Those looking for local products in Ludwigslust may be interested in the sea buckthorn, which is used here not only for syrups and jams and different food-related products - including honey, but also for soaps and beauty industry items, such as shampoos or hand creams. Lovers of nature may be interested to visit this town during the hot season, for following the different biking routes, horse-back riding or short boat tours. 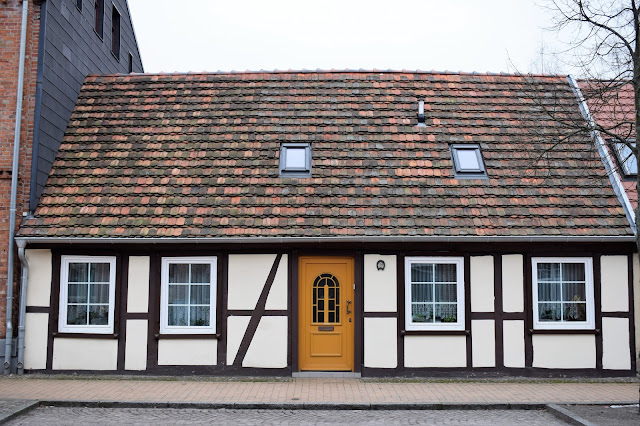 The colder and unfriendlier the weather, the more motivated I am to find interesting spots that can reward the effort of a trip here. I am walking the cobblestone old streets and the discovery of just another house sharing an example of local architecture is a pleasure both for my eyes or for the camera. 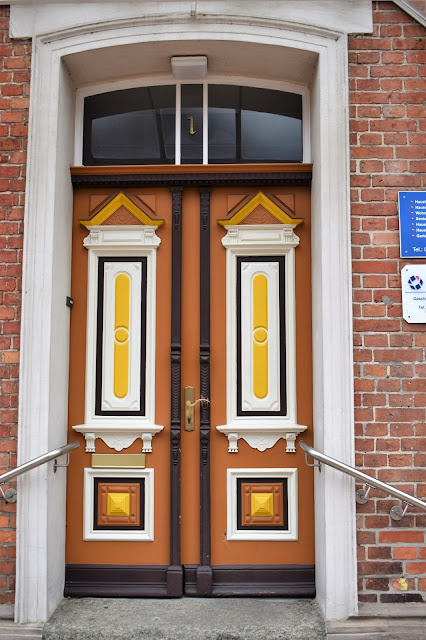 As usual on my trips, I keep an eye for interesting and colourful doors, and on the way back to the train station via  Kanalstr., I've discovered at least one beautiful work. 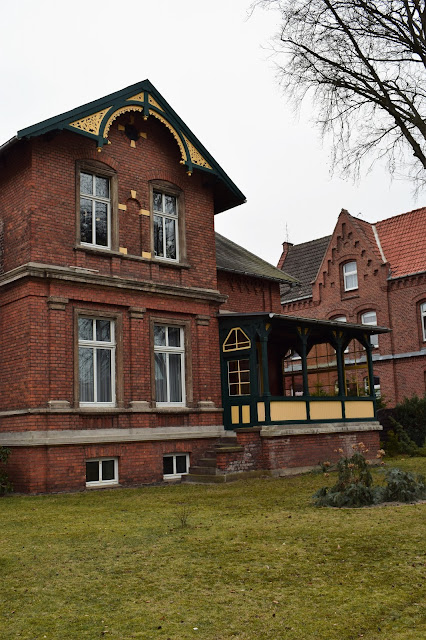 And I would have still discovering more and more new spots and angles, if the time for my train back to Berlin wasn't getting closer. I gathered enough impressions and stories for a first visit, and I keep in mind this destination for a next travel adventure in the coming months.
Posted by Ilana WD at 2:34 AM