'What do you want to do in Karlsruhe?', 'Is there anything worth such a long visit there?' my friends asked when I happily announced that I will visit this German city in the land of Baden-Württemberg. I am used with such questions as often friends and acquaintances, many of them born and breed in Germany too, need some time to check on Google the locations I am mentioning as my next travel destinations. I am here in this city relatively unknown in my part of Germany to explore for 48 hours 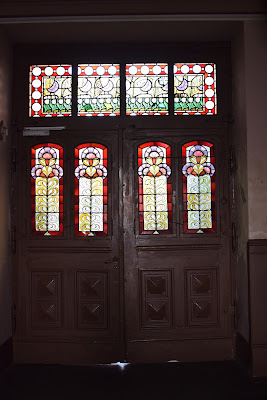 My visit coincided with the 14th edition of art Karlsruhe art festival and the central area was jammed by shuttle buses full of artists, critics and simply art lovers hurrying up to the exhibition place. Karlsruhe, an art city? It was a label I didn't find associated too often with this city, but as the art fair is more than a decade old, it seems that I had the wrong bibliography.
However, while slowly walking the long Karlstraße, I noticed the beautiful entrances decorated with colourful tiles or glass art, which was already a clear sign that the people in this city care about the way in which they live. 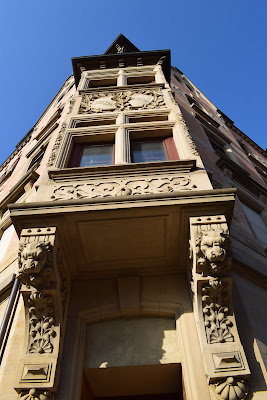 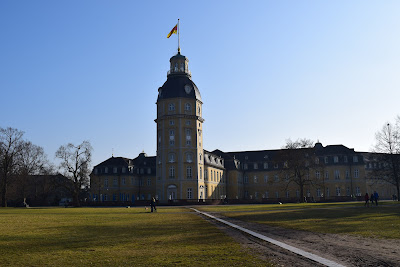 In less than one hour, I was gathering more and more visual impressions about the city, and the spring-like sunny day allowed me to add more thoughts while wandering the gardens of the Palace, a classical city destination. Taking the advantage of the sunny day, the city of Karlsruhe is fairly represented on the grass, from small children having their afternoon nap to highschool children playing football or students from the many faculties in the city reviewing their bibliography outdoors. 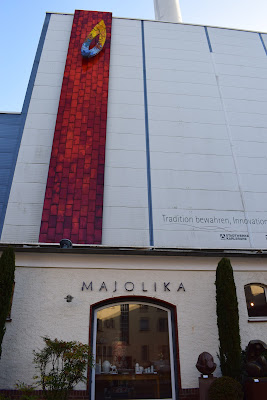 A couple of minutes later, a new information was added to my travel map: there is a tradition of craftmanship generously displayed at the Majolika factory and museum. From small sculptures to entrance tiles and bowls and plates, the visitors is offered colourful and interesting insights into the local traditions. Now, I know that the beautiful tiles I spotted before were not brought from Portugal or other places, but produced locally. 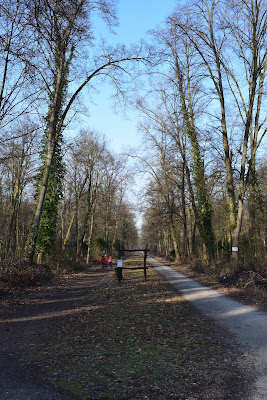 As the sunny day seems to last more than a couple of minutes - as we experienced in Berlin - so I take the chance for some long walks in the Hardtwald, alongside with many locals of all ages biking, Nordic walking or just walking as we do. As the city is surrounded by forests, the air is so fresh that once, after a couple of hours of rain the air was so fresh that made me feel I am on the top of the mountains. 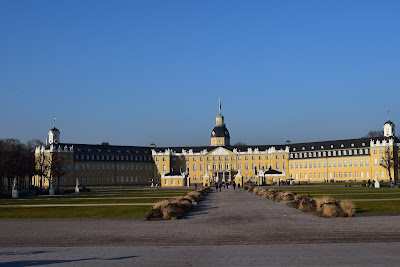 Back from my walk, I am heading back to the palace, making a mental note to return later for a serious visit of the modern and antique collections and temporary exhibitions. Interestingly, the building of the palace, in the 18th century, was planned as a very elaborated architectural project. The tower of the palace was situated in the center of the city, with 32 rays - streets - radiating out of it like the lines of a fan, therefore a German nickname of Karlsruhe of 'Fächerstadt' - 'Fan city', 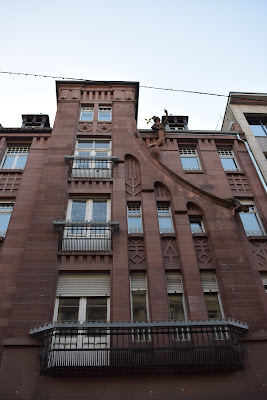 Meanwhile, I continue my first day in Karslruhe discovering streets after streets, not necessarily with a plan. And, as usual in such cases, my eyes are always rewarded with unforgettable views. My camera is having a lot of work to do right now. 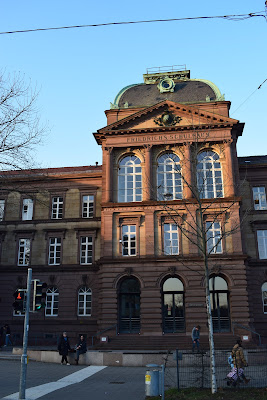 While in the Western part of the city, I notice the classical architecture which applies not only to schools and institutions, but also to houses. 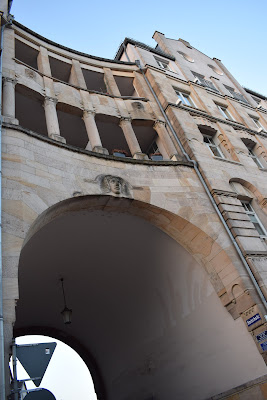 There is always a reward to the curious mind. While returning to the center, I decided to take a side street and after a couple of blocks I am in the front of a massive entrance to what used to be a private street built at the beginning of the 20th century: Baischstraße. The entire project was the idea of the local architect Hermann Billing Baisch, teacher at the local Art School. 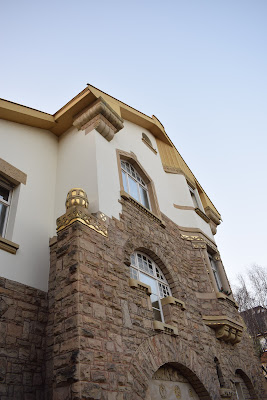 It includes a couple of dozen of big stone houses, with at least one storey, displaying unusual geometrical shapes and excessively decorated, particularly with golden touches. It is a challenging view, one of those moments when the traveler is happy to follow the unbeaten path. 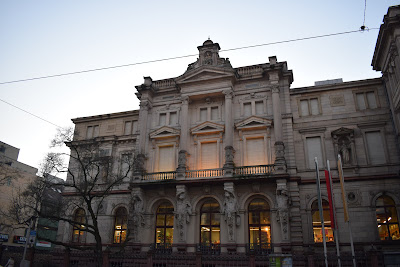 But besides arts, Karlsruhe is noteworthy also for its interests for the lettres. The elegant Prinz Max Palais, a late 19th century building where Prince Max of Bavaria used to reside, is hosting the Museum of Literature on the Upper Rhine and the Literature Library on the Upper Rhine. The literary society created in 1924, has nowadays 6,500 members, being one of the largest literary association of today's German speaking world. As I visited the city bookstores, I noticed many literary events, including a meeting with an author I like, Donna Leon who had a meeting with her readers at the small bookstore near the train station Schneider-Jung, unfortunatelly the day when I was already out of town. 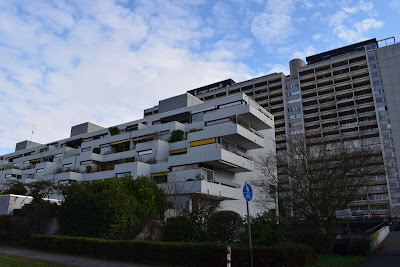 When on my way back from Ettlingen, on a tram that seems to be in use since the late 1960s as many others I've seen operating in the city - therefore without a proper facility from wheelchairs or baby carriers, but with free wifi - the name of a station appealed to me: Schloss Rüppurr. As castle hunting in Germany is on my bucket list, I made a stop there, happy to reveal to my readers another hidden gem. But after walking a bit more than expected without anything in sight and asking a local about the location of the castle, I realized that this time there is no reward. The castle, used for bishopry functions, is no more, but my less than 20 minutes visit to this Northern part of the city, close to the Exhibition - Messe - Center revealed some slices of modernist architecture which was a gain anyway. 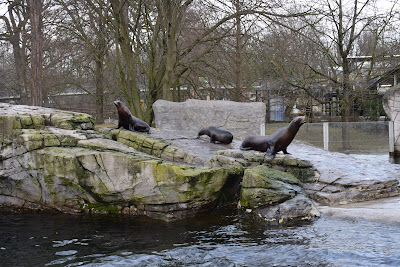 If you travel with children, finding interesting things to see and do is a hard task, wherever you are. The Zoo, opposite the central train station, offers a couple of hours of entertainment, in one of the oldest zoos in Germany. Opened in 1865, the huge park hosts 800 animals belonging to 150 species. My little one particularly appreciated the little colourful ducks roaming free on the grass, a view that you don't usually encounter often in the big city life.
Another local attraction that appeals to curious - but bigger - children is the Naturkunde Museum, situated in Europa Platz. 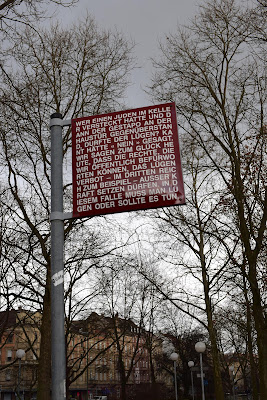 Karlsruhe is known equally Germany's judicial capital, a place assigned in the institutional architecture following the arrangements taking place in the Federal Republic in the aftermath of the WWII. In this city are located two important judicial institutions: Bundesverfassungsgericht - Federal Constitutional Court - the Supreme Constitutional Court - and Bundesgerichthof -  the Federal Court of Justice - the highest court in the system of ordinary jurisdiction in Germany. The institutions were assigned to this city on purpose, to be far away from the then-capital city of Bonn, in order to guarantee the right balance required by the act of justice, and were kept here after the reunification of Germany. The buildings of those institutions are interesting too. Behind high concrete walls surrounded by barbed wire, the Federal Court of Justice is hosted in a castle-like residence in the middle of a garden, while the Federal Constitutional Court is situated close to the castle, in a cube like construction with high window-walls.
Since October 2005, Karslruhe has also a Square of Human Rights - Platz der Grundrechte - inaugurated on the 50th anniversary of the founding of the Federal Constitutional Court. A project of Joachen Gerz, the aim is to make the idea of rights as a tangible value. 24 Metal squares attached on poles have written with capital letters on one side statements made by legal practitioners, scientists and legal experts on human rights issues, with on the other side statements from people in conflict with the law, 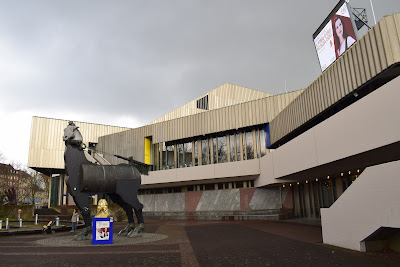 In 2015, Karlsruhe celebrated with a year-long festival 300 years since its founding and many of the buildings and main sightseeings received a serious lift. But when you want your city to look almost perfect, the work is never over. As my visit was in February and the touristic season was not officially open - except the regular French visitors, as the city is less then one hour away by train from France - many important buildings were surrounded by construction works. For instance, the famous pyramid and the entire marquet square area, including the historical city hall.
Until the final works are done, the visitors and locals can spend some good time discovering other cultural offers, such as the Badisches Staatstheater, built in the brutalist style of the 1975, serving as both a theatre and opera house, with a very rich repertoire, appealing to many age and educational categories. 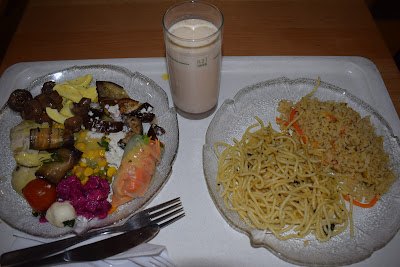 One of my biggest regrets during the intensive 48 hours spent in Karlsruhe was that I didn't have the chance to explore properly the food scene. Except for breakfasts, I tried to use my time between touring the city and visiting locations on my bucket list situated less than one hour distance, such as Baden-Baden or Pforzheim. The city has many interesting restaurants, especially African and Eritrean, which deserve an extensive tasting tour. For one lunch, I tried Viva Heute Vegettarisch, a vegetarian buffet offering a variety of meals for affordable prices. 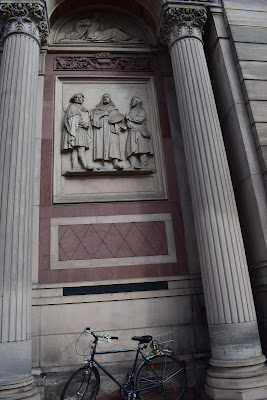 If you are a lover of arts, Kunsthalle is a destination that should be included on the to-do-list, with some good hours reserved to explore. It has an impressive collection of Dutch paintings and European works of arts in general, hosted in a classical temple-like building. Surprisingly, paintings considered 'outrageous for the public view' were decently hidden beneath silky curtains, the viewer being told to proceed to cover it after the view. For me, I think it was the first such 'modesty' experience in my whole eventful museum life. 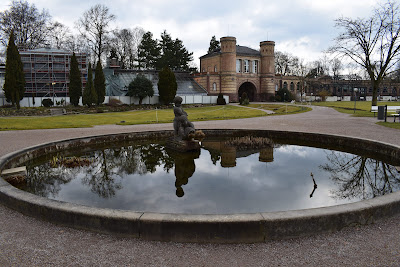 A couple of meters away, the Botanical Gardens are recommended if you are in need of a walk in the middle of a park made by beautifully organised alleys. 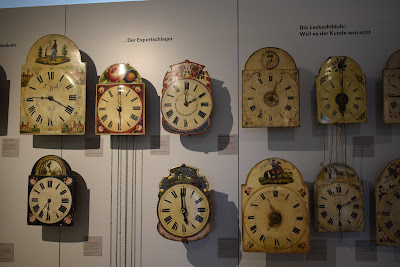 Back to the palace - operating as a museum since 1921 -, I am spending half of an afternoon exploring the art and historical collections. From history of printing to the famous Black Forest wall watches, there are many things to learn on the way about the Karlruhe and the entire region of Baden-Württemberg. Until this June, an exhibition about life in Egypt during Ramses the Great, is another example of local interest towards the Egyptian culture.
The famous pyramid, for instance, was built following the Napoleonian interest towards the traditions of Egypt. 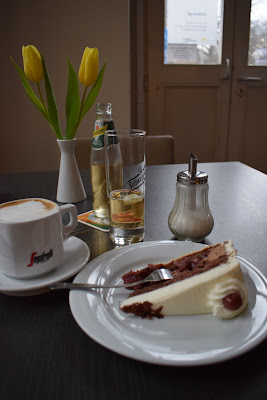 At the end of such an intensive cultural journey, I offer myself a food staple from the region, a slice of the famous Schwarzwald Kirschtorte - Black Forest cake. I've tasted various variants prepared outside the region, but I kept being disappointed. However, the one I've tasted at the Palace coffee place, has a perfect melting of the different layers, covered by a very soft whipped cream, and based on a thin and delicious batter. 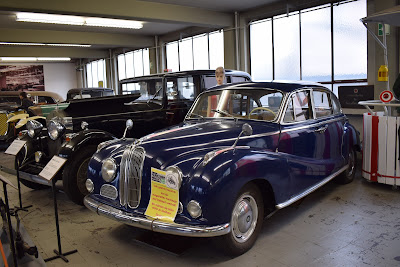 There were many other discoveries I made during my journey to Karsruhe: The small Transportation Museum - Verkehrmuseum - open only on Sundays, where I got permission to take fast some pictures outside the visiting hours; the quiet morning streets around Hirsch bridge or the busy shopping centers like Post, hosted in classical museum-like buildings. 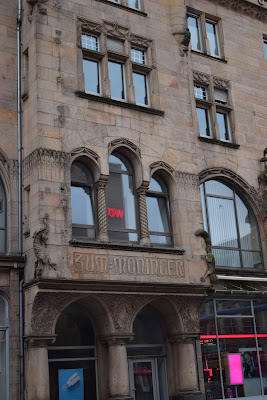 Although I only spent two full days in the city, I realized that I just got the taste to come back to see and discover more. Now, that I can coherently asking to anyone asking me: 'What can you do in Karlsruhe', I already have the plan to return any time soon for feeling more like a local than a busy tourist. I am sure there are many hidden gems waiting for me here.
Posted by Ilana WD at 3:32 AM